The Yak-42 (left) makes an interesting comparison to the Tu-134 (right)
The Yak-42 (NATO codename: Clobber) is a rather unusual looking aircraft no doubt partly due to the technical limitations of Soviet-era aero-engines and the usual Soviet need for a rough rugged aircraft able to operate from airfields with limited facilities. It is about the size of a 737 (with maximum seating for 120), but has three engines and a 727 style T-tail layout. It also has a surprisingly wide fuselage, allowing for 6 abreast seating, double bogeyed main landing gear. and two sets of inbuilt airstairs, one of which is at the rear fuselage as on the 727. It was designed as the successor to the smaller Tupolev Tu-134 but although it flew for the first time, in 1975, and production lasted for over 20 years the number built (185) never approached that of the Tupolev product (854).
The first production aircraft was ready in April 1978, but service entry wasn't until December 1980. Only ten aircraft were in service by mid-1981 and a June 1982 crash saw the type withdrawn from service until October 1984. The later Yak-42D longer range version attracted most of the production run (105) and, despite its rather ungainly appearance and troubled service entry, the type has proven useful in service into the 2010s - mostly in former Soviet states with secondary operators.

Soviet era aircraft have been quite poorly treated in 400 scale in the past decade. There was an initial flourish of Tu-154s, IL-76s and an IL-62M, IL-86 and IL-96 in the first decade of the scale but releases using these have dried up in recent years and until 2020 there were few other attempts. One in 2014 did include a Yak-42 but it was short-lived. 2019 and 2020 have seen a limited renaissance for Soviet types and once again a Yak-42 has appeared, but not as a standard die-cast mould from the usual group of brands. Currently it seems unlikely that either of the two existing moulds will be used again.

The Yak-42 really doesn't look a lot like anything else (much like the smaller Yak-40). It has a stocky appearance and looks rather over-engineered with double maingear and three engines. Early prototypes, as below, had a spike at the tailtip and a more pointed fairing above the no 2 exhaust. Note the APU exhaust in the tail intake just above the P of CCCP and the on-standard door configuration:

Michel Gilliand (GFDL 1.2
Production aircraft had a squared off tail without the forward spike and a squared off fairing above the no 2 engine exhaust. They also gained a 'frisbee' fairing between the fuselage and no 2 engine intake. The order of the doors was altered with a second smaller door ahead of the wing and only one overwing emergency exit.

Seagull were a brand that seemingly produced a small selection of models between 2012 and 2015 across both 1:400 and 1:500 scale. They started with a B-2 Spirit Bomber and a F-117 Nighthawk Stealth Fighter before branching into Yak-42s. All three types appeared in both scales. The finishing on all the models was nothing special and the prices were high by 1:400 standards. With the Clobber in 400 they produced only a single model in the 'colours' of Avioimpex of Macedonia and I recall them talking about how this was the first Macedonian 400 scale airliner. From the outside the choice appeared bizarre aside from being easy to do as it required little printing work.
The story became a little clearer when I asked on DAC in 2014. The user Eurojet replied:

"The Yak-42 was produced for Aviation Centre Berlin (ACB) who obtained the rights for almost all possible liveries. The first model however was made on purpose of Seagull (and not ACB) and as the ACB didn't have the rights for Avioimpex this livery was made which was not too difficult for a first model. Last news I had a some months ago Seagull and ACB were still in clinch, which may also be a cause for the lack of Yak releases.
​
Lastly I have been told by the manufacturer that the next Yak is planned for the end of the year..."

Unfortunately no further Yak-42s ever appeared and Seagull seem to have gone out of business.
The mould itself looked ok although I'm told the finishing was rough. Unusually for a mould in 2014 it is cradle mounted and the attachment of the T-tail stabilisers rather damages the shape of the tailtop. In detail the nose shape and no 2 exhaust are not quite correct and the undercarriage seems rather long. Nonetheless there was the essence of a decent mould there.
De Agostini (2020)

De Agostini is a major Italian corporation, which has a publishing arm producing magazines in combination with scale models, which either need to be constructed or come pre-built. They have produced many titles several of which have involved aerospace models such as 1:72 WW1 fighters and Space vehicles. They have also produced airliner models for a series for Japan Air Lines. This usually involves producing a surprising range of unique moulds in 1:400 scale. These are not up to modern 1:400 standards but can range from poor to pretty decent.

In 2020 De Agostini created a new magazine series covering the history of Aeroflot's civil aircraft. The Aeroflot magazine website can be found here. Six models were advertised although it seems only four issues were produced each with a model and a new mould. The models were of an Ilyushin Il-18, Tupolev Tu-154, Boeing 737-800 and a Yak-42. As of early 2021 it is unclear whether the fortnightly magazine will continue. Some have said it has ended whereas others have said that this was a test for a larger upcoming run. The website talks of there being a plan for over 50 editions!
Of the models made the Tu-154 and 737 look poor. The Il-18 is better but only the Yak-42 looks like it has much potential. Recently I was able to acquire one of these from an eBay seller to join my collection. I have given it the full review treatment on the site so check out the detailed review here:
Aeroflot | Yakovlev Yak-42 | CCCP-19751 | De Agostini 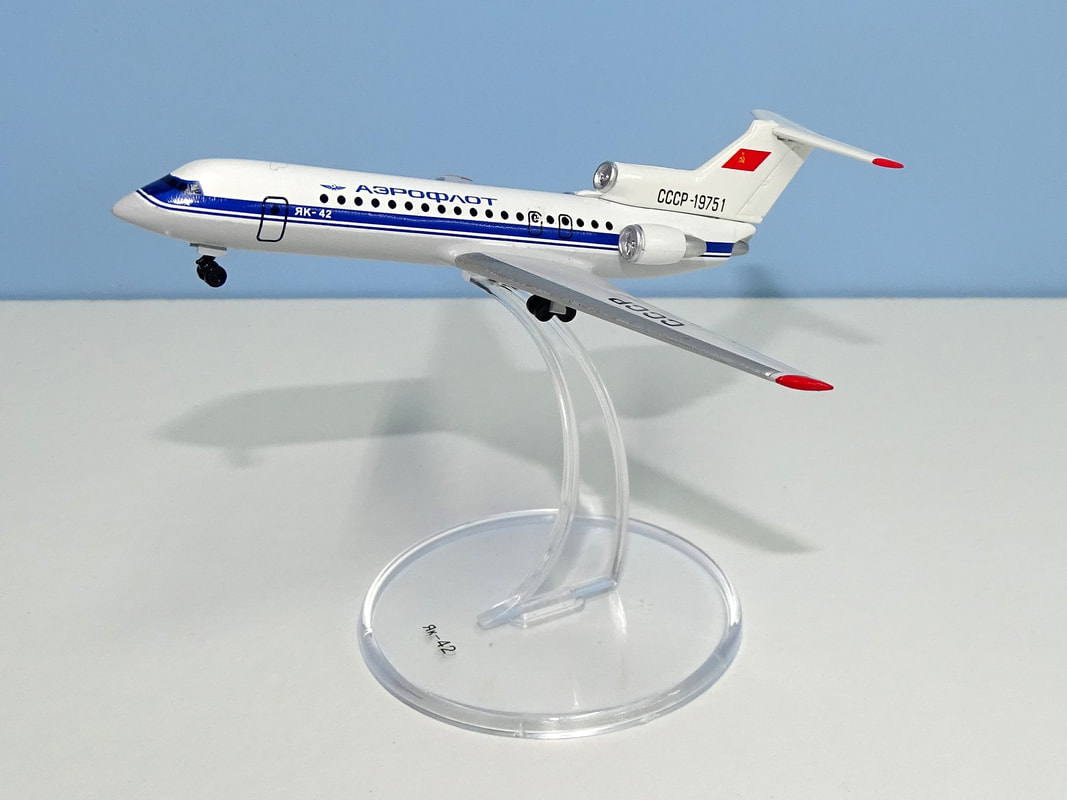 In general the mould is quite decent although the printing leaves a lot to be desired.