By Andy T. Payne
Black & White Photos used with permission of San Jose Airport Collection (click images for originals)
San Jose is the largest city in the San Francisco Bay Area, home to more than 1 million residents and 170 companies. Situated at the bottom of the San Francisco Bay, it is Santa Clara County’s seat and the gateway to a major high-tech center, the Silicon Valley, with technology giants such as HP, Adobe, Apple, Cisco, eBay, Intel, Google, Yahoo, and Facebook, to name a few. 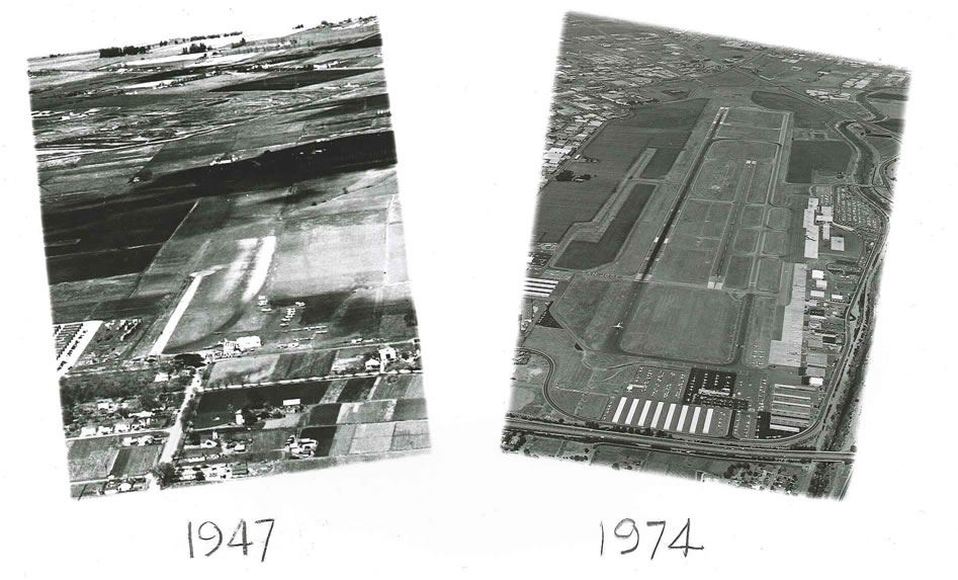 San Jose from 1947-1974
Compared to San Francisco and Oakland, San Jose was slow to even acquire land for an airport; barnstormers and the like used the private fields surrounding the city. San Jose voters rejected the 1928 bond for a municipal airport, and the Citizens Airport Committee was unable to see their dream come to fruition.

That all changed a decade later, in 1939. Leader of the Citizens Airport Committee, Ernie E. Renzel, personally selected an area part of the Crocker Family’s Stockton Ranch, for an airport. The site had been approved by US Bureau of Air Commerce for diversions from San Francisco Airport. This location was recommended because San Jose experiences little fog, of which lasts until 10 AM. Shortly after, a $300,000 bond was finally approved by San Jose voters, allowing the land to be purchased.
A New Tower, Runway & Terminal
By June of 1957, a 6-story control tower opened to the east of the runway. It was part of a construction project which also included the realignment of the Guadalupe River, runway extension, and a new terminal.

Brokaw road finally closed in 1958, part of a deal in which San Jose would partially fund the construction of De La Cruz Blvd to the west. To the eastern perimeter, construction started an industrial park. Highway 17 (now Interstate 880) was almost complete, bordering the airport to the south.
Construction of a 4,419 foot second runway finished in 1961 and the original runway was lengthened to 6,975 feet. Airport Village, a recently abandoned emergency housing development, was demolished. Some of the barracks were added to the terminal.
Construction of a new terminal, designed by local architect Hollis Logue Jr., started in 1964. On July 6th of the same year, air traffic controllers recorded the millionth aircraft movement. San Jose State Aeronautics Program relocated to their former location on Coleman Ave. Another pest, this time sow bugs, interrupted airport operations. Millions of them gathered on the runways and seagulls ate them, disrupting air traffic.

By 1965, San Jose was the 16th busiest towered airport in the United States, and the new terminal building opened on September 16. The dedication ceremony occurred a year later, on November 6th, 1966, after the completion of a restaurant and cocktail lounge. 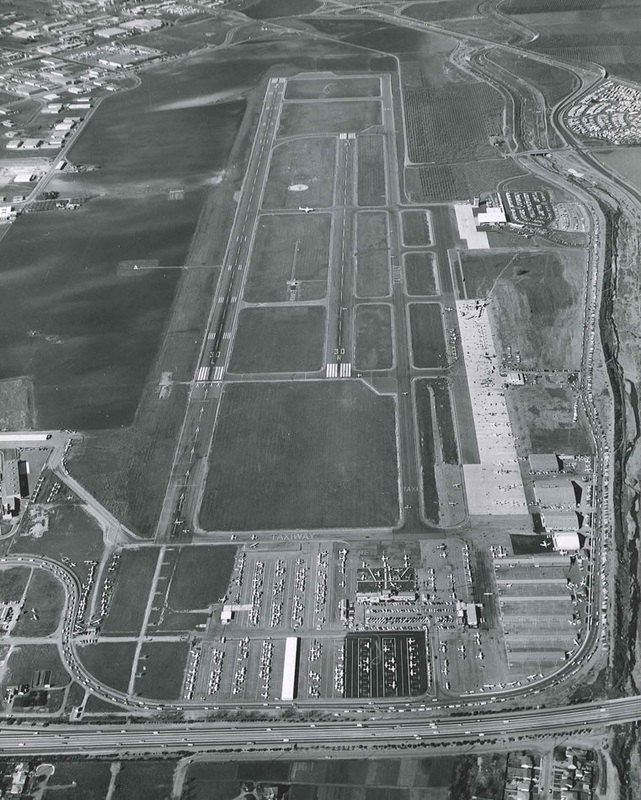 SJC in January 1966 prior to completion of the new terminal