The April 1965 announcement of the Super Sixties series saved the DC-8 from being a failure. In fact it re-energised the production line and created the largest jetliner of the time. By the time production ceased, in 1972, of the 556 DC-8s built 262 were series 61/62/63s. The DC-8-61 represented a mammoth double stretch of the original DC-8 body (6.1m before the wing and 5.1m after it) and sacrificed range for passenger load. It could seat over 250 people and entered service with United in February 1967. The DC-8-62 had two smaller 1m stretches but also featured an extended wing, plus redesigned engine pods and pylons. It could seat up to 189 passengers and had fabulous range. Finally the ultimate DC-8, the series 63, had the body of the 61 with the wing and engines of the 62. It entered service in June 1968. As well as the US majors, United and Delta, the stretch Eights were very popular with supplemental airlines and cargo companies offering great range/payload on their South-east Asian Vietnam contracts.

Gemini's original DC-8-61 mould dates from 2001 and shares the standard features of early Gemini moulds - simple undercarriage and a rear seam at the tail. The mould is actually pretty good and shares the nose of their shorter DC-8-51 mould. Being so much longer the slightly chunky nature of the nose is better hidden. The worst thing about the mould is that the nosegear seems too short sometimes, but its a relatively minor niggle. They produced 6 US examples with 2 of them re-released as Schucos between 2001 and 2004:
Gemini Jets DC-8-61 Mould 1b (2007)

Gemini have returned to the DC-8-61 only twice more and that was in 2007 when they released a version in the colours of Capitol Airways and another in the colours of Loftleidir Icelandic. These 2 utilised a new one piece fuselage, which didn't have the seam, and they also modified the nose-gear doors, though now if anything they are too big. Still its a great mould. 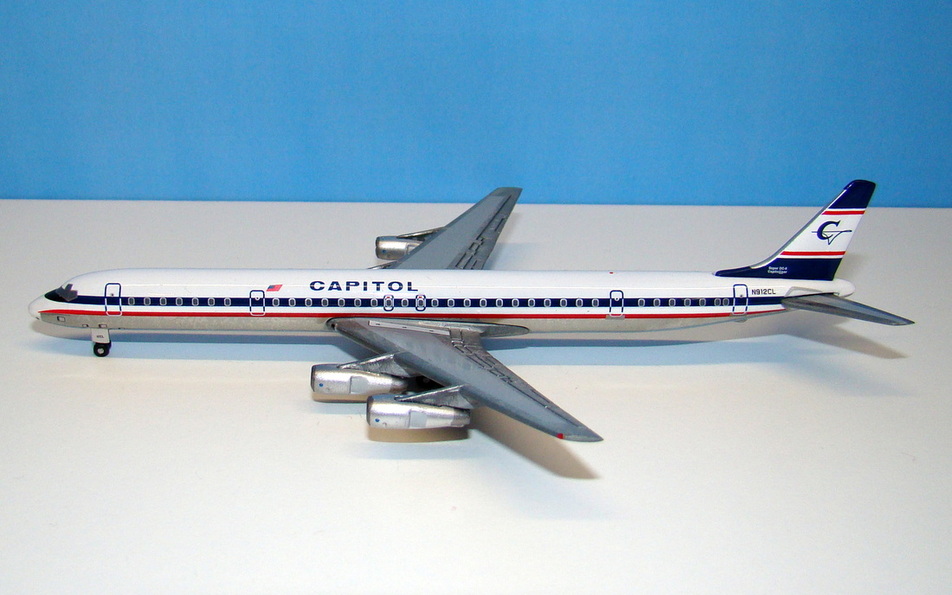 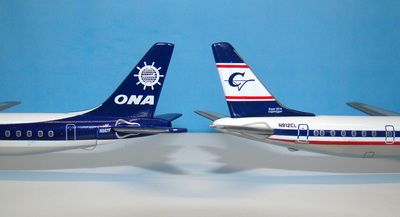 Aeroclassics entered the DC-8-61 market in 2004 with their own mould - though it looks like two of the earliest releases were for BigBird. The mould is nice except that the nose is a bit pointy and certainly inferior to later Aeroclassics DC-8s made. Only 9 models were made between 2004 and 2007.
Here is the first Aeroclassics mould compared to the first Gemini Jets mould. They both have issues:

Fortunately Aeroclassics came good in 2008 and created the definitive DC-8-61 mould with a new nose section and rolling gears. This mould has been used 16 times and is superb. Aeroclassics has even taken to reproducing versions which were first made on the earlier mould.
Here's a close-up of the old and new Aeroclassics moulds and the new Aeroclassics and new Gemini series 61 too:

Here are some shots showing the difference between the engines and pylons of a series 61 and a series 62/63 (all shots use Aeroclassics models). Note how the series 62's engine pylons and cowlings are very different to the series 61 and especially that the pylon no longer moves up onto the wing's upper surface: 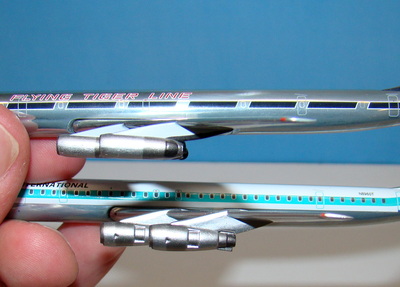 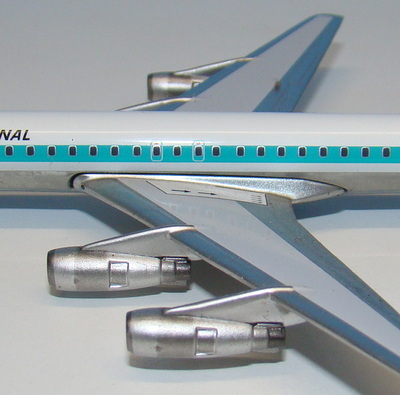 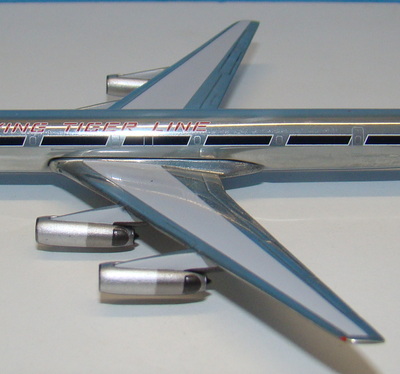 Aeroclassics produced the first DC-8-62 mould in 2004 and fortunately this didn't have the issues their first series 61 mould had. They produced only 6 models however (1 for Gemini and 2 for BigBird) up to 2007 - although one of these is the much sought after Pan Am DC-8-62.

In 2008 Aeroclassics updated their mould with rolling gears which has made an already fine mould exceptionally good. Since then they have used the mould 33 times (including 7 Jellybean Braniffs) and it has recently seen some reuse since a pause between 2010 and 2015.

Because all their DC-8 Moulds share the same seam lines, when Aeroclassics entered the DC-8-61 market in 2004 they were also able to produce a DC-8-63 mould by adding the series 62 wings to the series 61 fuselage. Unfortunately this means that their first attempt shares the same inferior nose to their first series 61. Only 13 models were made between 2004 and 2007. I actually don't own any of these so can't show you a photo, but imagine the National DC-8-61 above with the Braniff Calder's wings.

The new series 61 mould created in 2008 obviously opened up the possibility of new series 63s too and Aeroclassics has gone to town on this mould producing 43 different models using it. As with the new series 61 and 62s it is a superb mould.

One of the features of the re-engining programme is that new engine pylons were required, which removed the major outward difference between the series 61 and 63 when they became series 71 and 73s. I'm not sure whether Gemini's 2008 mould has the other wing differences but regardless Gemini has made 16 models since 2008 evenly split between the two types. The Mould has rolling gears and aside from the new engines and pylons uses the same fuselage as their 2007 DC-8-61 mould (see above). It's a perfectly decent mould though the tyres do seem a bit large. 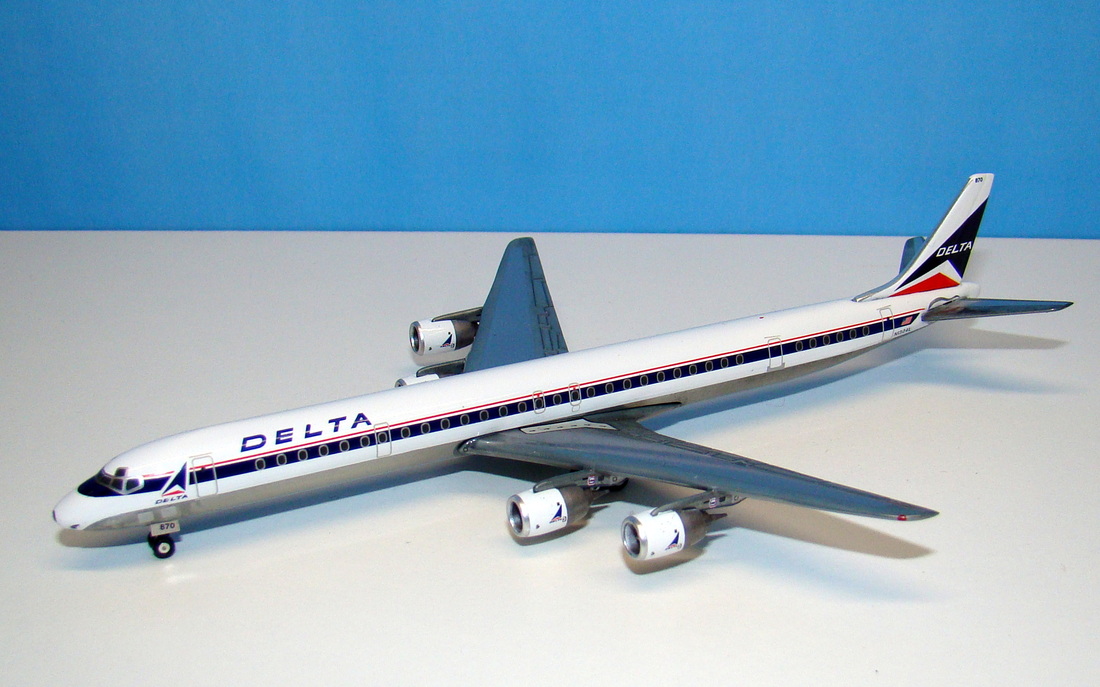 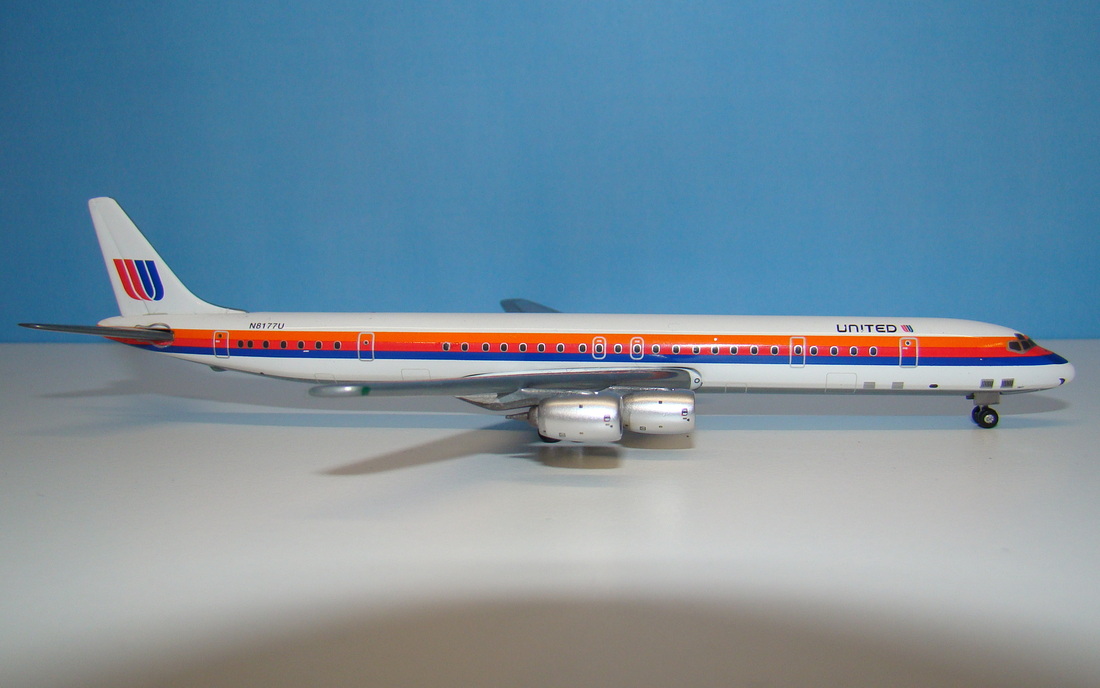 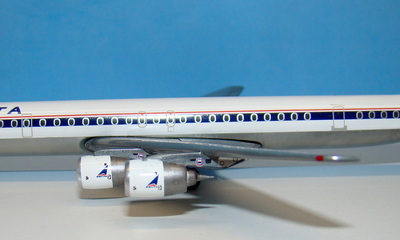