The intention of this page is to describe and show all the Eastern Air Lines liveries from 1946 until the airline's collapse in 1991. Schemes prior to World War Two are not covered.

Note: Dates represent the years aircraft were painted in the scheme not necessarily how long the livery persisted in the fleet.
1940s-1952: THE GREAT SILVER FLEET
Eastern had been using the moniker "The Great Silver Fleet" since the introduction of its DC-2s in 1934. This continued postwar and onto the first DC-4 "Silverliners" and Lockheed L-649 "New Type Constellations". The feathered cheatline ended forward with a roundel containing the classic "Falcon Wing" emblem. This falcon was repeated on the tail with a blue rudder.
The model below shows the basic scheme but without the tail logo: 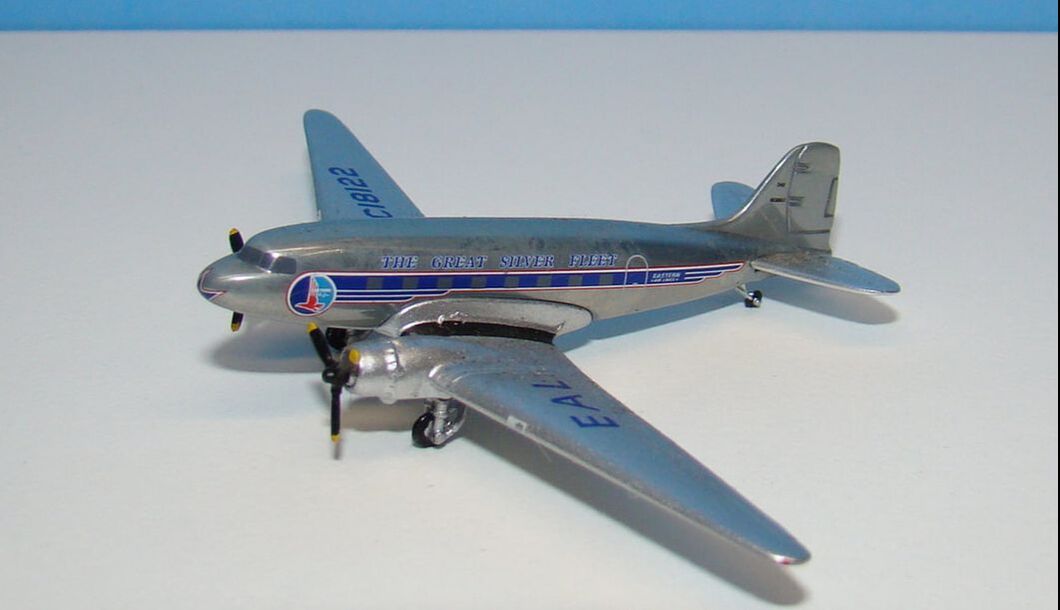 1952-1961: SILVER FALCON
The previous livery was kept for most of the 1950s but the titles were changed to "FLY EASTERN AIR LINES" in 1952 and from 1953 aircraft gained the white top fuselage. This scheme was worn by the Convair 440s, DC-3s, DC-4s, Martins and all variants of the Constellation.
1955-1959: GOLDEN FALCON DC-7B
Eastern's DC-7Bs introduced new 'Golden Falcon' service and liverywise a new streamlined falcon was used on them. The leased DC-6s also wore this new falcon.
1959: GOLDEN FALCON ELECTRA
The first Electras arrived in a modified Golden Falcon without the blue rudder, with "FLY EASTERNS PROP JET ELECTRA" titles and red engine nacelles trimmed in blue. The very first Electra wore "FLY EASTERNS ELECTRA PROP JET" titles prior to delivery as shown below.
1960-1961: GOLDEN FALCON JET VARIANTS

The first Douglas DC-8-21s wore a heavily modified ​Golden Falcon scheme with a blue 'spear' edged in white, red and gold, and a new streamlined Falcon on the tail. The original titles were incredibly long and stated "FLY EASTERN'S GOLDEN FALCON JET DC-8B". There was a natural metal finish beneath the cockpit and a small anti-glare panel.

Delta and United complained about the DC-8B titles and the CAB ordered Eastern to remove them, so quickly the titles became just "FLY EASTERN'S GOLDEN FALCON JET" and the anti-glare panel increased in size also. This is the scheme shown below:

The changes didn't end there however as the titles were further modified in 1960 to just "FLY EASTERN AIR LINES". There was still more variation in 1960 as some, but not all, aircraft also received a modified tail design with a new much larger Falcon and no blue stripe at the tip. This scheme is shown below:

In the end the problems with the Lockheed Electras necessitated the creation of a new livery and this scheme would only ever be worn by the early DC-8-21s.
1961-1963: 720 SCHEME
1961-1964: EASTERN AIR BUS / RED SPEAR
During the early 1960s the Eastern Super Constellation fleet was repainted into a red spear variant of the 720 scheme with a red spear and the modified falcon, in red, on the tail. Some aircraft wore full EASTERN AIR LINES titles while others had FLY EASTERN AIR BUS or SHIP EASTERN depending on whether they were used on the special Air Bus or cargo services.
1963-1965: FLY EASTERN 720 SCHEME
In preparation for the arrival of the first 727-100s Eastern shortened its titles to just "FLY EASTERN" and modified the falcon on the tail once again. The falcon returned to being gold with a thin red and blue outline. Some of the fleet skipped the original 720 scheme altogether and switched directly to this one but even this would be short-lived thanks to 'Operation Bootstrap'. This scheme was worn by the whole fleet except for the Super Constellations.
1964: EXPERIMENTAL NEW MARK VARIANTS 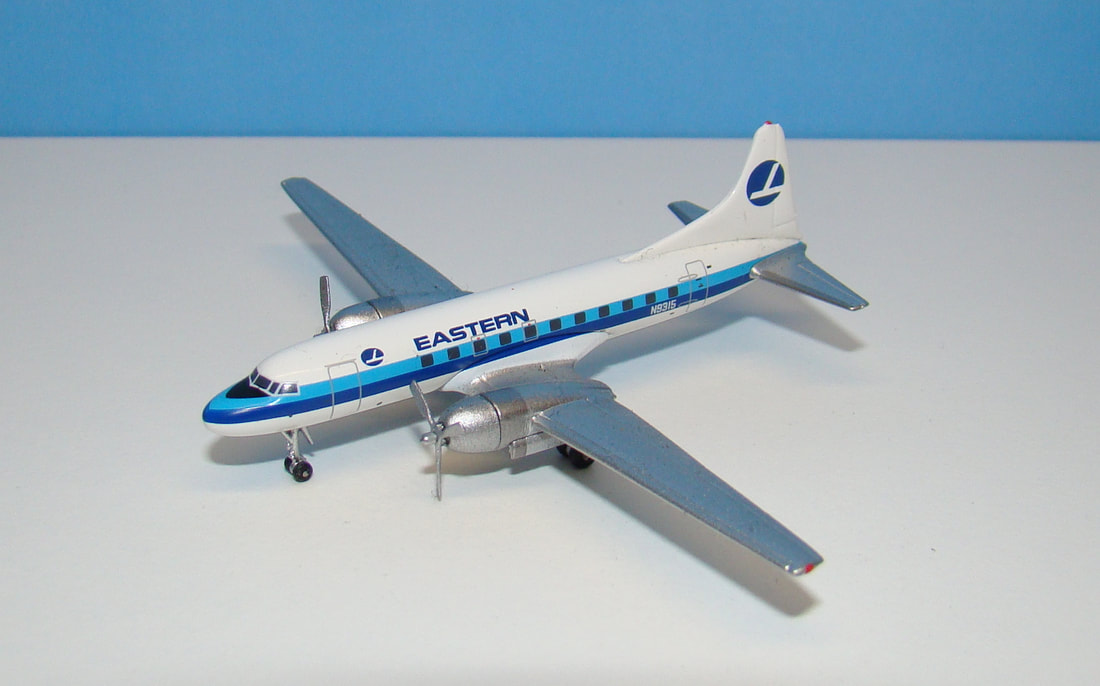 1965-1971: NEW MARK / HOCKEYSTICK V1
The classic hockeystick would be worn initially by the Boeing 720s, 727s, Convair 440s, Douglas DC-7Bs, DC-8s and Lockheed Super Connies. As they were delivered Airbus A300s, Boeing 727-200s, Douglas DC-8-61/63s, DC-9-10/30s, and Lockheed L-1011s would also wear this livery. The 727s and DC-9s were adorned with Whisperjet titles and the Tristars became Whisperliners. Most of the small number of leased 747s wore the New Mark also, but see the below entry.
1970-1971: PAN AM HYBRID 747 N731PA
All of Eastern's leased Pan Am 747s would wear the New Mark scheme but N731PA would, for four months only, wear a Pan Am hybrid scheme during her first lease to Eastern. The scheme had the Pan Am windowstripe but with the Eastern falcon on the tail and bore a resemblance to the 1964 experimental new mark scheme because of that. 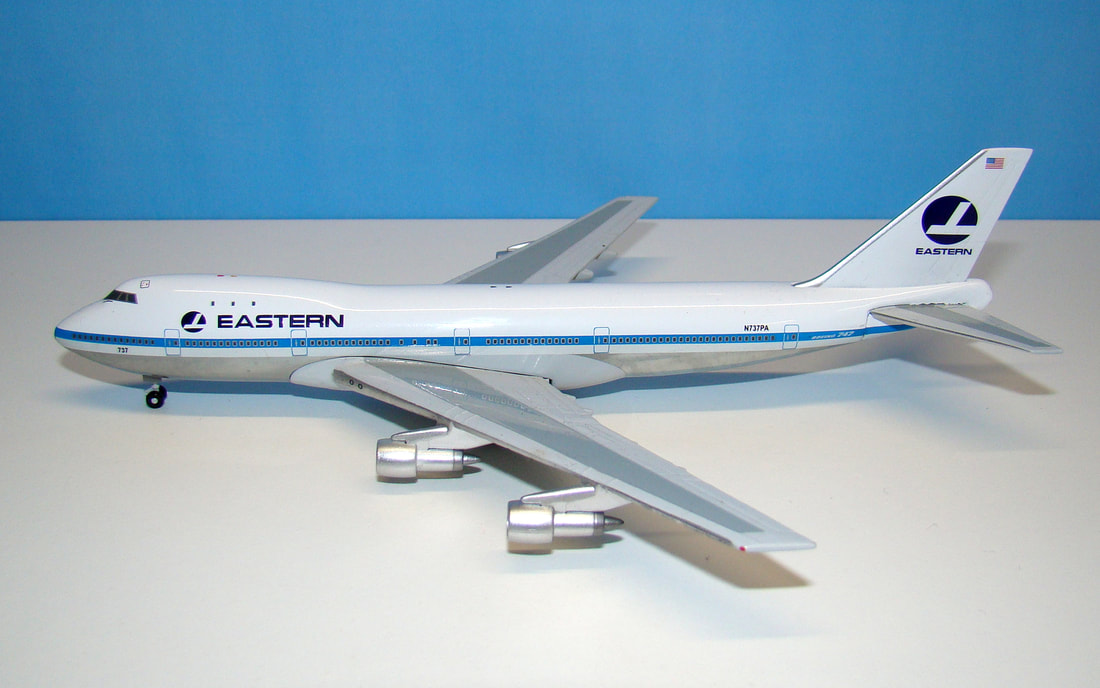 1971-1975: NEW MARK V2 (BARE RUDDER)
In 1971 the standard New Mark was modified slightly on the DC-9s and 727s, partly no doubt to alleviate the mess the fuselage mounted engine's exhausts made of the white paint. The rear fuselage and rudder were left natural metal as shown by the below DC-9-30:

1975-1976: US BICENTENNIAL
To celebrate the 1976 US Bicentennial Eastern decorated its fleet with a special sticker. For more details see:
Independence Pt2: The Atlanta Bicentennials

1975-1977: NEW MARK V3 (SILVER LOWER FUSELAGE)
By 1975 and into 1977 some of the Boeing 727s, Douglas DC-9s and Lockheed Tristars were wearing an almost completely natural metal belly and rudder which followed the lower line of the hockeystick, save for a thin white border. Photos can be seen here:
1977-1981: NEW MARK V4 (SILVER NEW MARK)
Eastern's experimentation with natural metal finishes led to the adoption of a totally natural metal look in the second half of 1977. The only other changes from the original hockeystick were that the darker blue stripe curved down at the nose to the black nosecone and the Whisperjet/Whisperliner titles were removed.
1981-1990: NEW MARK V5 (LOW CHEATLINE SILVER)
1981 brought yet another variation of the New Mark with the cheatline moved to under the windowline and substantially thinned out. This was created as direct result of IAM cost cutting measures, which using this scheme reduced manhours to mask a 727-200 for painting by 65% (due to not needing to mask each window individually). The DC-10s and 757s were delivered in this scheme but the latter with large 757 titles on the tail.
1984-1990: NEW MARK V6 (GREY)
In 1984 the A300s finally transitioned out of their white scheme but could not be left in a natural metal finish and so were painted grey. This was also applied to at least some of the 727-100s, but no DC-9s, 757s or Tristars ever wore this version of the scheme. Some aircraft wore "AIR SHUTTLE plus" titles.
1990-1991: NEW MARK V7 (BLUENOSE)
The final Eastern livery was almost a return to the original 1977 silver New Mark livery, but had minor differences. The lower Ionosphere blue now covered the entire radome and the upper Caribbean Blue ended at the cockpit. The aircraft fleet number was also moved out of the downcurved blue cheatline at the nose and moved aft of it in blue. Lastly the 757s lost their tail titles.