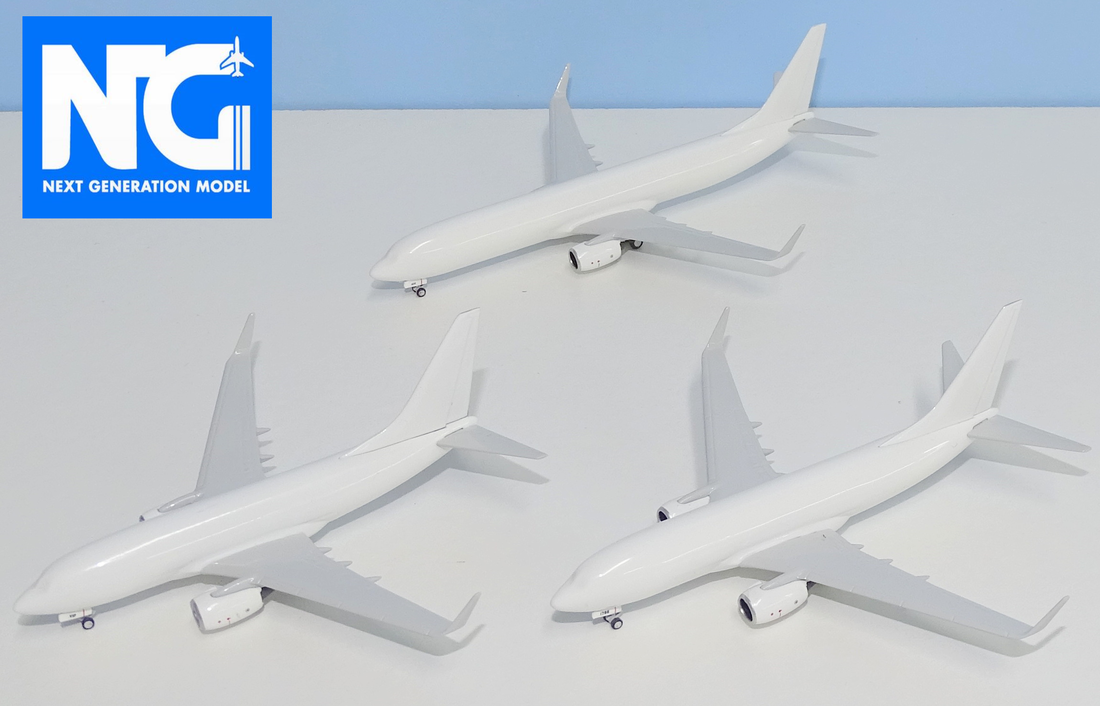 NG Models have big plans for 2021, but with the announcement that they had 10 new moulds coming this year it was fairly obvious that some would be variants of existing moulds. The first three new moulds have arrived at the hangar and complete NG’s lineup of Next Generation 737s, with the series 600, 700 and 900 joining the existing 800s. Here I’ll take a look at the new samples and state of the market for 737NGs.

The new moulds with the old 737-800 sample on top of the box.
It was way back in December 2018 that I received the first samples of NG’s new 737-800 moulds. They were excellent and although there has been some minor criticism (about nosegear fixing and nose shape) they easily remain the best Boeing 737NGs ever made.​ In fact, arguably the small changes that have been made to the 737-800 production mould slightly modifying the angle down from the cockpit to nosecone and from geardoor to nosecone have not been improvements.
NG Models Boeing 737-800 Sample Review 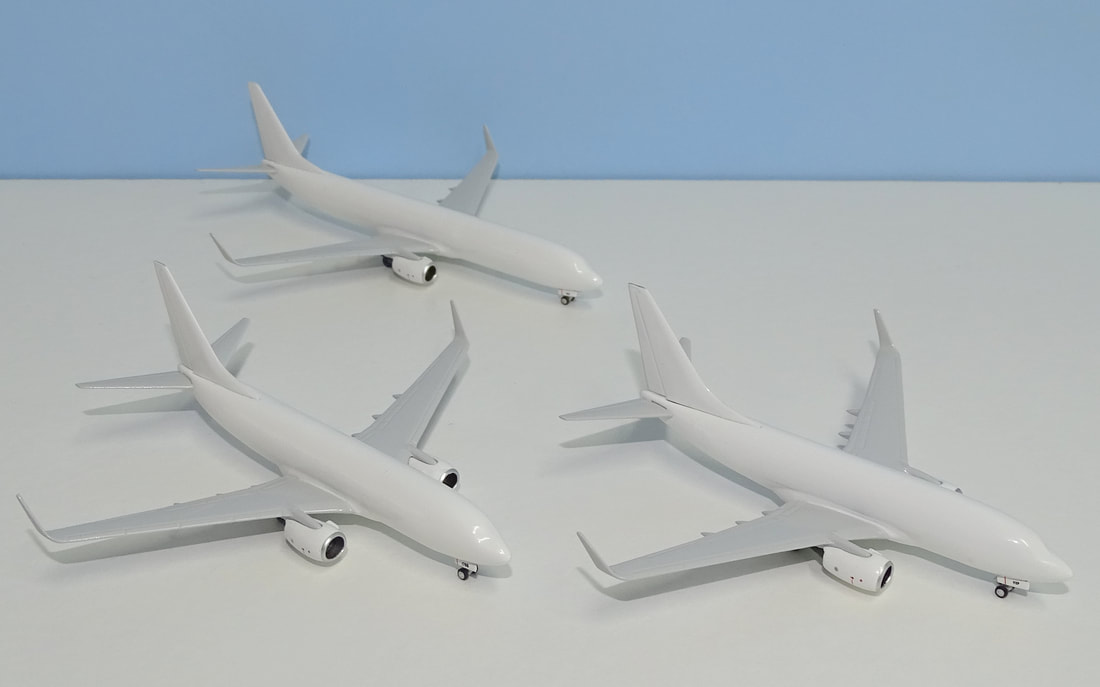 NG have made good use of their 737-800 moulds with 76 announced or released models in less than two years compared to there being only 94 Gemini 737-800s in 20 years and 178 Phoenix 737-800s in 12 years. It stands to reason then that they are also likely to fill out the ranks of the other series, which is no bad thing as the other 737NGs have not been anywhere near as well covered as the series 800, and, when they have, they’ve often used weak castings. 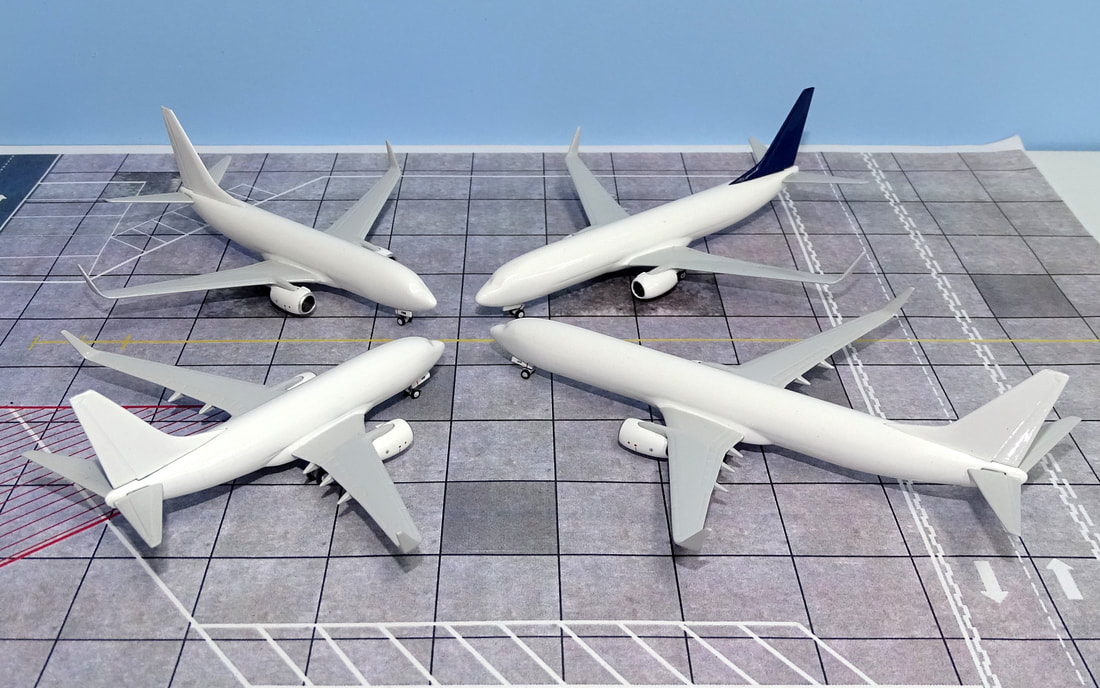 This is the most surprising of the three new variants made, although if you’re producing a 700-900 range the extra cost of a 600 is presumably small. Panda have the only decent mould in this space as prior to 2018 all the other manufacturers, aside from Herpa, ignored the type.

Aero Icarus from Zürich, Switzerland, CC BY-SA 2.0
COMPETITION
The Panda mould is very nice and they’ve recently released a few new models for a total made by them of 14, although usually they produce multiple regos for the same scheme. There aren’t lots of empty slots left but there are a few (Lauda, Malev, Air Algerie, Tunisair and FlyGlobespan for example) and so I expect those to be filled. Given that Panda have struggled to release much at all recently this new competition for 737-600s is likely to be a thorn in their side. Out of interest I did do a 737-600 wishlist sometime ago before Panda got their releases into swing so it is fairly comprehensive:
Short Stuff: A 737-600 Wishlist 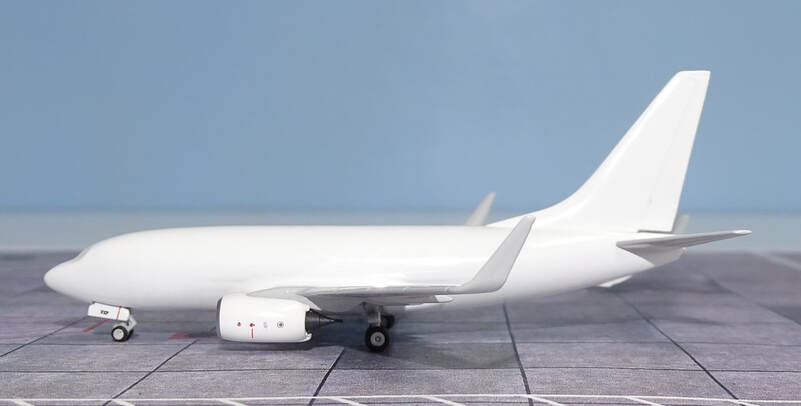 New NG Models 737-600 Mould Sample
This new 737-600 casting looks excellent and gives the Panda mould a real run for its money. A quick comparison suggests the NG version doesn't have the slightly nose down stance of the Panda, has better engine exhausts and a superior rudder lower edge free of the fuselage. Arguably the undercarriage and nosegear doors look a little better on the NG too.
One obvious error with the NG however is the provision of a tail bumper, which is not fitted to the 737-600. NG will need to remove that.

There have been only 140 Boeing 737-700s made in 400 scale and only 6 in the past 2 years (all from Gemini and four being Southwest varieties). With Panda having stopped producing many 737s back in 2018 even Chinese airlines are poorly covered for this variant. Interestingly a further pair of Southwest series 700s have recently been announced for RM Models made by Panda and it’ll be interesting to see if they use the same mould as before. Considering that 1,128 737-700s were built, many of which have entered the second-hand market, you can see there is plenty of unrealised demand for 737-700s.

Danny Yu, CC BY-SA 4.0
COMPETITION
The main existing moulds for the type are from 4 sources: Gemini Jets original, Phoenix, JC Wings / Gemini and Panda Models. The original Gemini Jets mould (oddly used 3 times in 2020 for some obscure reason) is arguably better than the later JC Wings / Gemini version that replaced it. The Phoenix series 700 has the same duck nose and other failings as their 800. Unfortunately, the shortened series 700 tends to accentuate the issues of the longer 800. The Panda Models version (also used by Aeroclassics briefly) is easily the best of the existing moulds but isn’t perfect and was mainly used for Chinese airlines anyway.
NEW MOULD 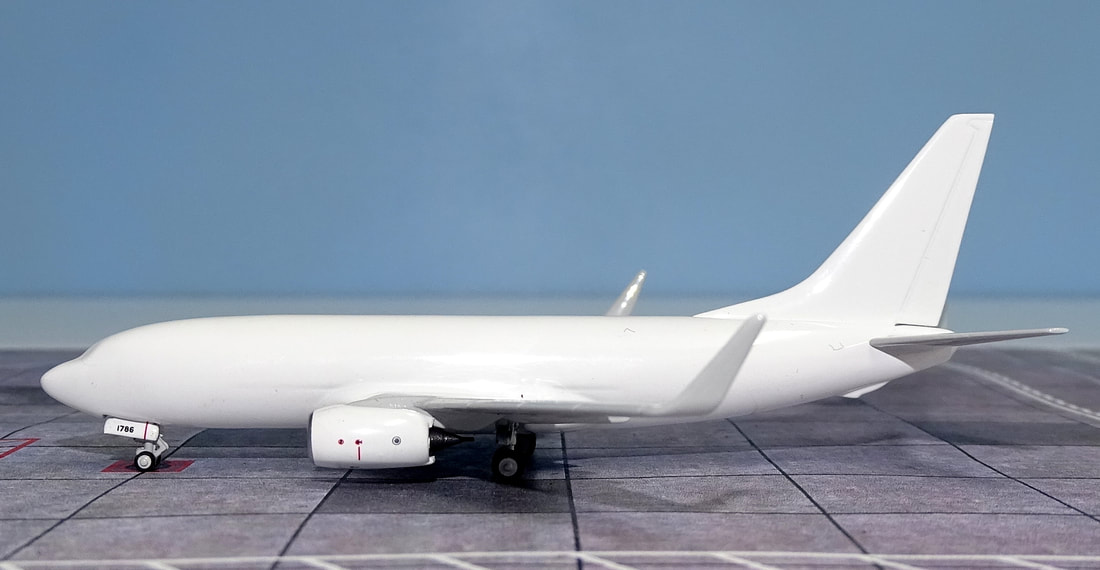 Interestingly I'm not as convinced of the shape of the nose on the 73G sample as I am on the 737-600 version. The 700 series looks a little squarer at the lower edge of the nosecone. Otherwise this is clearly a serious improvement over all the other available series 700s with a far superior nose and cockpit region. The undercarriage and engines are also much better - especially in terms of nosegear door shape, engine pylons and exhaust. The tail rudder lower margin is far superior to all but the Panda (I hadn't previously noted how weird the Phoenix was in this aspect).

Once again the only obvious error with the NG is the provision of a tail bumper, which is also not fitted to the 737-700. NG will need to remove that.

COMPETITION
The competing moulds mirror those of the 737-700 except Panda never made a series 900 and Witty Wings made a few instead. With the absence of the strongest of the series 700 moulds almost all the releases are very ordinary and/or a little obsolescent in terms of details so there is plenty of scope for re-releases as well as all new models. Below are three of the four moulds. I don't own any of the newer JC Wings / Gemini Jets mould but it shares most characteristics with the series 700 and 800 versions.
NEW MOULD

The series 900 carries over all the details from the other two versions and has a better shaped nose than the 73G sample. It also correctly this time has the tail bumper found on all series 900s.

NG Models have provided me with three samples, one for each mould. There are a couple of things to note: 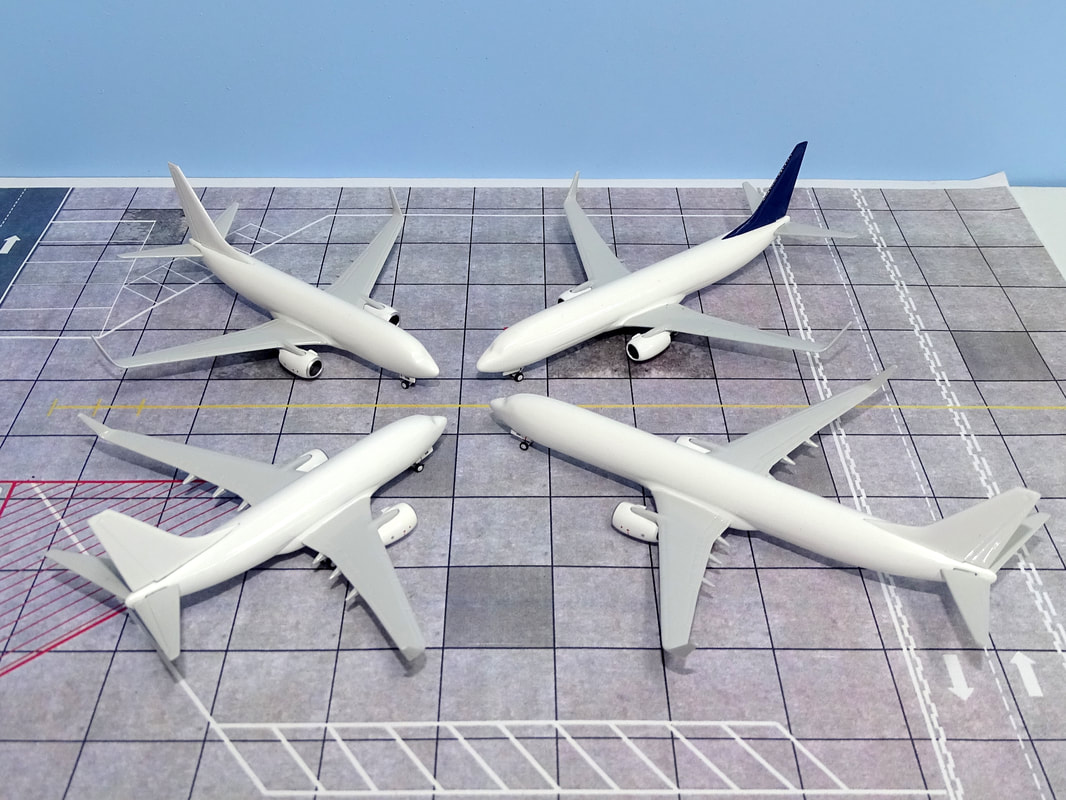 All four wingletted 737NG mould samples
Obviously all three share a huge amount of commonality with the existing 737-800 mould so I don't feel the need to do a detailed review of each. they clearly score well and almost identically to the series 800 moulding. When I first received the samples I admit to not being overwhelmed with joy, however some investigation has shown what a huge opportunity there actually is for these mould variants in 400 scale when so few of them have been made already and the existing 737 moulds (unlike the A320 series) are relatively weak. With the 737-700 almost entering classic era territory (ha ha I know it's a stretch) I can see quite a few of that variant at least entering into my collection both as additions and replacements. 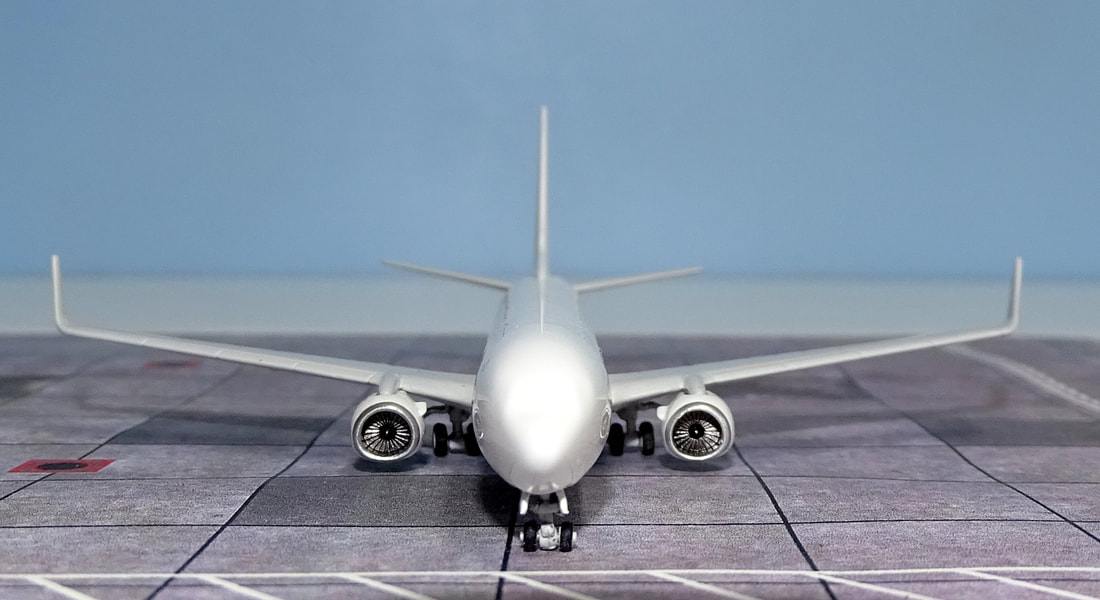