Text by R. Stretton
A modified version of this article appeared in the March 2016 issue of Airliner World Magazine.

Go here for a Genealogy diagrams of China's airlines

CAAC was a major customer for the British Trident in the 1970s
​In December 1978 Deng Xiaoping and his ‘pragmatic’ faction were endorsed at the Third Plenary Session of the 11th central Committee of the Chinese Communist Party.  They advocated reform whereby elements of a market economy would be introduced.  The reforms were gradually rolled out across the economy and by 1984 it was aviation's turn.  Prior to this in 1979 CAAC was split into six regional bureaus and in 1980 it was moved from the control of the People’s Liberation Army Air Force to the State Council.
​In 1981 the regional bureaus were made responsible for their losses as well as gaining the ability to retain a share of their profits. Though a step in the right direction the state still guaranteed the survival of the separate bureaus and took a major portion of any profits.  These factors failed to stimulate significant movement towards profitability and further change was obviously required.

In 1984 it was decided that CAAC would be split so that it would continue to exist as an administrative body, but no longer have control over direct airline operations.  It would however retain responsibility for aviation safety, air traffic control, route entry, pricing levels and financial and safety controls on new entrants.  Its airline component was to be split into multiple separate carriers based upon the existing administrative regions.  Additionally other government departments, local authorities and businesses were able to start their own airlines and airports were gradually to be transferred to local authorities.

Boeing 747-200s joined the CAAC fleet in the 1980s
In 1984, prior to CAAC's actual breakup, trials with the Xiamen special economic zone had already created Xiamen Airlines.  In 1985 China Xinjiang Airlines was created as a 50:50 joint venture with the regional government in that remote region.  Also in 1985 the Shanghai city government and local businesses created its own airline: Shanghai Airlines.​

China Xinjiang Airlines Tupolev Tu-154M B-2607
The airline operations of CAAC itself were split between 1987 and 1991 into the following government owned carriers based around former regional bureaus:

Air China's livery was and remains similar to CAAC's albeit with a new bird/VIP logo
The first three were much larger than the rest, and accounted for half of China's air travel with the remaining three accounting for a further 26%.  China Southern was the largest domestic airline but Air China and China Eastern had substantially larger international operations.  Initially all aircraft, except those of Shanghai Airlines, wore the colours of CAAC, however gradually aircraft began to appear in the unique branding of their new organisations.  The six ex-CAAC bureau airlines all continued to get financial support from the government and were not profitable, in part due to central government actively encouraging them to setup their own airline subsidiaries. 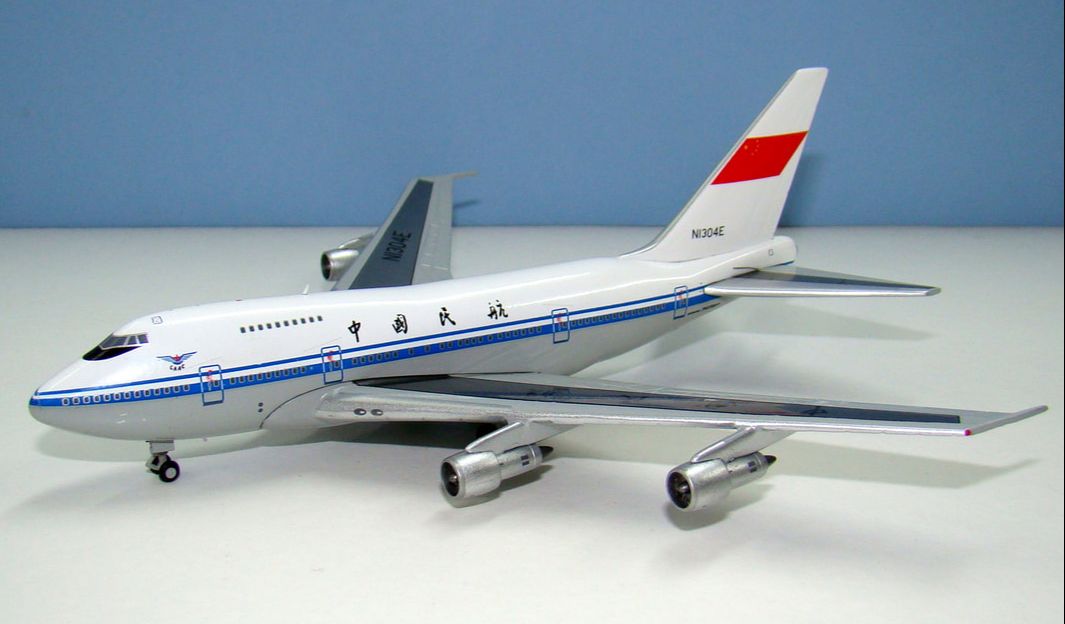 The short haul fleet was numerically still made up primarily of ancient Ilyushin IL-14s and slightly newer Antonov 24s and 26s.  Even here though there were signs of modernity with ten British Aerospace 146-100s and eight Short 360s being relatively recent additions along with eleven De Havilland Canada DHC-6 Twin Otters.  The only domestically produced aircraft in the fleet were a growing number of Xian Y-7s (a modified license built version of the Antonov AN-24 which entered service in 1985) one version of which (the Y-7-100) was equipped with large winglets.

Air China & China Southwest Boeing 707s
This was the fleet that was transferred over to CAAC’s successor airlines.  By 1988 China Southwest was already operating at least one 707, Xiamen Airlines had a 737-200 and China Southern the 757s.  Further 757s, 767s, MD-82s and new 747-400s were on order. The MD-82s were especially noteworthy in that in 1987 the first of 35 aircraft was delivered that were constructed in China by Shanghai Aviation Industrial Corporation under license from McDonnell Douglas.​

Shanghai Airlines Boeing 707-320C B-2425
Shanghai Airlines was the only airline that had at this point utilised equipment sourced from outside CAAC stocks, when it began operations with what grew to become a five strong fleet of Boeing 707s.  By 1990 however it had taken delivery of new Boeing 757s and the 707s had been returned to their lessors.  Shanghai’s initial livery was a rather bland blue cheatlined effort, but one of the 707s and the new 757s were painted into an attractive red scheme, though still keeping the white crane logo of the earlier scheme.

With the breakup of CAAC and some liberalisation of the market three different types of airline came into existence:
A fourth group of airlines created by private enterprises, large state owned enterprises and, from 1994, foreign investors would gradually enter the market also. Hainan Airlines although often seen as China’s largest private airline was initially formed as a partnership between the Hainan local government and CAAC. Though subsequently opened to private investors its largest shareholder remains the Hainan province government. True private airlines would not emerge until the 2000s.​

Hainan Airlines beginnings and livery were modest
By 1995 over forty separate airlines existed in China. CAAC itself had re-entered the airline market, as there were no rules to prohibit it doing so, with its China National Aviation Corp (CNAC) Zhejiang.  Even the CAAC Flying School started its own airline, Air Great Wall, flying a pair of TU-154s from Chongqing. Several of these early airlines would grow into major carriers in the 2000s most notably Hainan Airlines, Shandong Airlines, Shenzhen Airlines and Sichuan Airlines, however their beginnings were less auspicious.  ​​

Air Great Wall Tupolev Tu-154M B-2628
Equipment supplied for many of the earliest start-up airlines was often interesting.  Sichuan Airlines for example was formed in 1986 and began operations in July 1988, as many of the early carriers did, with Y-7s.  It wasn’t until nearly four years later in January 1992 that the airline was able to start pure jet operations and then it was in the form of 4 new build TU-154Ms, which can hardly have been its first choice.

Sichuan Airlines Yupolev Tu-154M and Airbus A320
At this time the purchasing of equipment for Chinese Airlines was controlled by a subsidiary of the CAAC called the China Aviation Supply Corporation (CASC).  Things however improved for Sichuan when it was able to become the first airline in China to place into service the Airbus A320, the first of which (B-2340) arrived in December 1995.

China Xinjiang Airlines Ilyushin IL-86 B-2019
There were several other purchases of obsolescent, but nonetheless new, Russian equipment into the 1990s.  China General Aviation, formed in 1987, primarily as its name suggests for general aviation purposes, added 7 Yakovlev Yak-42s from January 1992 to expand its passenger operations from Taiyuan.  Initially delivered in CAAC colours they soon took up China General’s attractive red and blue livery.  Urumqi based China Xinjiang Airlines even became the only airline outside of the former Soviet states to operate the Ilyushin IL-86 new when it received 3 aircraft in 1993.  Although a safe and spacious aircraft the IL-86 could hardly claim to be efficient or modern even at that time, however the type was suitable to the airline’s trunk routes, which included services to Moscow where no doubt the IL-86s were in good company.
Wuhan Airlines, formed in 1988, was meanwhile operating even more decrepit equipment with a quartet of Czechoslovak license built Ilyushin IL-14s, known as the Avia 14, which it had acquired from the air force.  Avia had built 204 Avia 14s but the last had rolled off the production line in 1960!  Fortunately Wuhan was able to re-equip with newer, but barely more modern, Y-7s by late 1990, and, in comparison futuristic, Boeing 737-300s as the 1990s progressed.
In fact, despite this smattering of elderly Soviet-era equipment it was the 737-300 which was the aircraft of choice for the majority of the new airlines.  By 1995 thirty nine served with the growing fleets of Hainan Airlines, China National Aviation, China Xinhua Airlines, China Xinjiang Airlines, China Yunnan Airlines, Shandong Airlines, Shenzhen Airlines and Zhongyuang Airlines.  This was somewhat ironic considering that McDonnell Douglas had initially been believed to have won a major victory over Boeing with its joint venture Trunkliner programme with China National Aero-Technology Import and Export Corporation (CATIC).
The deal to co-produce forty MD-80s and MD-90s, signed in 1992, turned into a diplomatic and technological nightmare and following Boeing’s takeover of McDonnell Douglas the entire programme was cancelled.  Only 2 MD-90-30Ts were produced and the original designated recipient, Shenzhen Airlines, had by the time they were ready in late 1999 already built up a fleet of 737s and didn’t want the orphan MD-90s. Both frames eventually found their way to China Northern which already operated the type.​

Flying with the Military

One airline which was unique in China was China United Airlines, setup in 1986 by the People’s Liberation Army. Although originally operating for military flights only, the carrier diversified into passenger transport and had the benefit of being the only airline allowed to use Beijing Nanyuan Airport, which was and still is a military base. ​
Their original equipment was made up of the usual variety of Ilyushins and Antonovs but they also operated Tridents until June 1992 and in fact were the last commercial operator of the type in China. The Tridents were replaced by sixteen TU-154Ms including a trio of ex-CSA examples.

As early as 1988, a 737-300 also joined the fleet followed by several more during the 1990s. The original China United remained in operation until its scheduled services ceased in November 2002, followed by its complete closure in 2003 as the government outlawed the Army from being involved in commercial activities. It has since been reborn as a subsidiary of Shanghai Airlines.

The creation of the separate airlines and expansion of both the air market and China’s economy created year on year growth of 30% in the early 1990s, which the underfunded infrastructure struggled to sustain.  This had been exacerbated by a change in the CAAC’s decentralisation of airport operations which meant that 70% of airport construction costs would be shouldered by local governments.  In July 1994 it was announced that no further new aircraft would be ordered for at least eighteen months and that CAAC would stop issuing licenses for new airlines.  The money saved was instead invested into air traffic control and safety measures.​

China Eastern Airlines McDonnell Douglas MD-82 B-2127
This was in response to a number of accidents, which in only a few years had killed almost four hundred people.  The crashes included those of not just Russian built aircraft, like a China General Aviation Yak-42D which overran the runway at Guangzhou killing 108 in July 1992, but also that of modern Western equipment.  In 1993 alone there were three write-offs, involving a China Northwest BAe 146-300, a China Eastern MD-82 and a China Northern MD-82 whilst an incident involving a China Eastern MD-11 also killed two people.

China Northwest Tupolev Tu-154M B-2602
The final straw was the crash of a China Northwest Airlines TU-154M near Xian on June 6 1994 which killed all fourteen crew and one hundred and forty six passengers.  Chinese air safety certainly improved dramatically throughout the rest of the 1990s with only single crashes in 1997 and 1999 causing fatalities.  Another outcome of the issues facing Chinese airport and air traffic control infrastructure was the implementation of bans on turboprop types at congested airports like Beijing Capital, where their slow speeds and small size proved a nuisance.  This in turn stimulated the transition of prop operators like Zhongyuan and Wuhan Airlines to jet operations.
This article continues in part 2 as I take a closer look at the fleets of the big 6 in the 1990s:
Pt2 - The Big Six in the 1990s