The Douglas DC-9 was the first of the US short-haul airliners and managed to grab back a good chunk of the market back from the European Sud Aviation Caravelle and BAC One-Eleven. Unlike the European pair the DC-9 could quickly be stretched and it was the DC-9-30, which had a 4.2 metre stretch over the DC-9-10, that would bag the lion's share of the orders with 662 orders. The longer DC-9-41 got 71 and the even longer series 51 96. It was these versions that would be the primary competitor against the 737-200 until the advent of the Super 80s. The DC-9 became the mainstay of most of the local service airlines and several of the US trunk carriers. It's trusty no nonsence solid design made sure that it would have a long career even with front-line carriers - most famously Northwest/Delta.

As of January 2020 there have been around 230 DC-9-30s made in 1:400 scale with nearly half made by Aeroclassics, who are the only manufacturer still using any of the moulds. As you can see Gemini Jets, Net Models and Phoenix made a decent number all on the same mould, although the Net Models ones are often obscure, hard to find and include some bizarre gold models. They aren't worth searching for anyway. 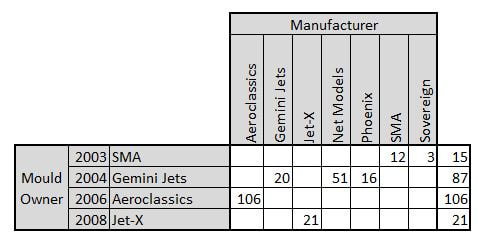 The Seattle Model Aircraft Company were the first to attempt a DC-9-30 and they made 12 models from 2003-2004 several of which were available in double packs and one of which (a US Navy C-9) was for JetCollector charity sales only. Sovereign Models, a UK brand, used the mould three times also, for a pair of Alitalias and a single THY release. The last of any of these was made in 2005 and the mould then vanished never to be seen again.

The mould is actually quite good considering its age. It has two seams (around the wings and at the horizontal stabs) but both are discrete. The main fuselage and wings are very good. The only real failing is at the nose, which is too heavy and rounded. The angle down from the cockpit is ok but the underside is incorrect.
Gemini Jets / Netmodels / Phoenix (2004-2010)

It is a little hard to say who commissioned this mould, although Gemini Jets used it for the longest period (between 2004 and 2010). Gemini made 20 models covering a decent range of US airlines, with only one each from Aeromexico, Aero California and Aeropostal representing non-US airlines. Netmodels made the most using this mould and considering some of their examples have weird slightly toy-like undercarriage it could be they were the creators of the mould and first users. They also made a decent range of mainly US examples, but spiced it up a bit with models like the highly sought after TAA camel livery. Bizarrely they also made some gold plated examples. Phoenix also used the mould sixteen times and made a wider range of airlines including some from Asia (like Cebu Pacific).
The mould itself has some advanced features but the details are variable across releases (especially the Netmodels ones). It is a cradle mount mould but the way the wings are attached makes the seam almost disappear, although at the expense of the wing join fairing shape. The tail seam is also well done with just the forward part of the seam really visible. The rear seam wraps around under the stabilisers.
As with the SMA mould it is the nose, which gets the most criticism. The angle down from the cockpit is too steep and the nose too asymmetric. It looks like it has been shortened prematurely. In my opinion this is the weakest of the existing moulds and I actively look to replace models in my collection that use it.
Aeroclassics (2006-Still In Use)

It wasn't until 2006 that Aeroclassics decided to enter the DC-9-30 market and their mould has been used almost continuously since. It remains the only active DC-9 mould at present. In keeping with their philosophy AC have used the mould both regularly and diversely, covering many DC-9 operators from around the globe. What they haven't often done is compete directly with previous models using the other moulds. This began to change in 2018/19 when models such as ValuJet, Hughes Airwest, Continental (TX hybrid) have been produced, all of which were made on the earlier inferior castings.
The mould itself bears a strong resemblance to the SMA mould around the wing, with an almost matching seamline. At the tail the horizontal stabilisers slot in to the sides and so there is no secondary seam. Where this mould really becomes the gold-standard is at the nose. It is the first DC-9 to get the shape correct. Even after 14 years it remains one of Aeroclassics finest moulds and accordingly I own 46 of them.
The only concern with the Aeroclassics DC-9 is that sometimes the fit between the wing and fuselage isn't as good as it should be and, as with the 727-200, Aeroclassics cockpit window printing isn't as good as it used to be. Most of the time it is passable but sometimes it is poor - like the Kenya Airways example:

The most recent DC-9-30 mould was made by the reborn Jet-X after they had ceased using Dragon Wings moulds. They made 21 examples over a three year period, however nearly half of them have poor cockpit printing. The models themselves had quite diverse airline subject matter. Jet-X are, for example, the only manufacturer to make Ansett DC-9s. Other unusual subjects included a pair of IPEC cargos and a Nasa example.
The mould looks very nice and has a nosecone and cockpit as good as the Aeroclassics. It also has a very nice wing/fuselage seam that hides the seam line even better than on the Gemini version. The horizontal stabilisers are separate pieces and so there is no seam line at the tail. The primary criticism of the mould is that it seems to be slightly too short when held up against a DC-9-30 image, and in comparison to the other castings (7.8cm long compared to 8.2 for the Aeroclassics and SMA). Additionally the cockpit printing is highly variable and some of the releases have a rather nose-down attitude.
The mould hasn't been seen for years but presumably is part of the JC Wings catalogue nowadays since they have the Jet-X BAE 146.