Boeing was well behind the curve when it began investigating a short-haul jet, with the BAC One-Eleven, Douglas DC-9 and Fokker F28 all already either in service or flight testing. To save time Boeing used up to 60% of the 727 structure, which at least gave them 6 abreast seating - something none of the competition had. Lufthansa became launch customer in February 1965 but the initial series 100 was a poor seller compared to the, almost 2 metres longer, series 200, which United became launch customer for in April 1965. Lufthansa received its first series 100 in December 1967 but only 30 of the shorter variant were ever produced. United put the longer series 200 into service in April 1968. In the early years the 737 was not a hot seller and the programme skirted cancellation several times before finally hitting its stride in the mid- 1970s. This was helped a lot by the introduction of the improved B737-200 Advanced model in 1971. Eventually a very impressive 1,114 series 200s were made (including 19 for the USAF), with the last being delivered in 1988, several years after the series 300 had already arrived on the scene.

Before we take a look at the situation in 1:400 let's take a look at the B737-100 in real life:
As of July 2016 in 1:400 there have been 10 B737-100s released. Though they have been released for Seattle Models Co (SMA), Sovereign and Aeroclassics they all appear to utilise the same mould which seems to have originally been SMA's.

The mould dates from 2003 when SMA made two models. Sovereign then made a pair of Lufthansas in 2005 and SMA made one Air California example the same year. The other five releases between 2007 and 2009 have all been by Aeroclassics. The mould is a good one though the nose does sometimes seem a bit blunt - almost like the Gemini 737-200 (see later).
You can see in the below photo the size difference between the B737-100 and B737-200 which is apparent even in 1:400 scale: 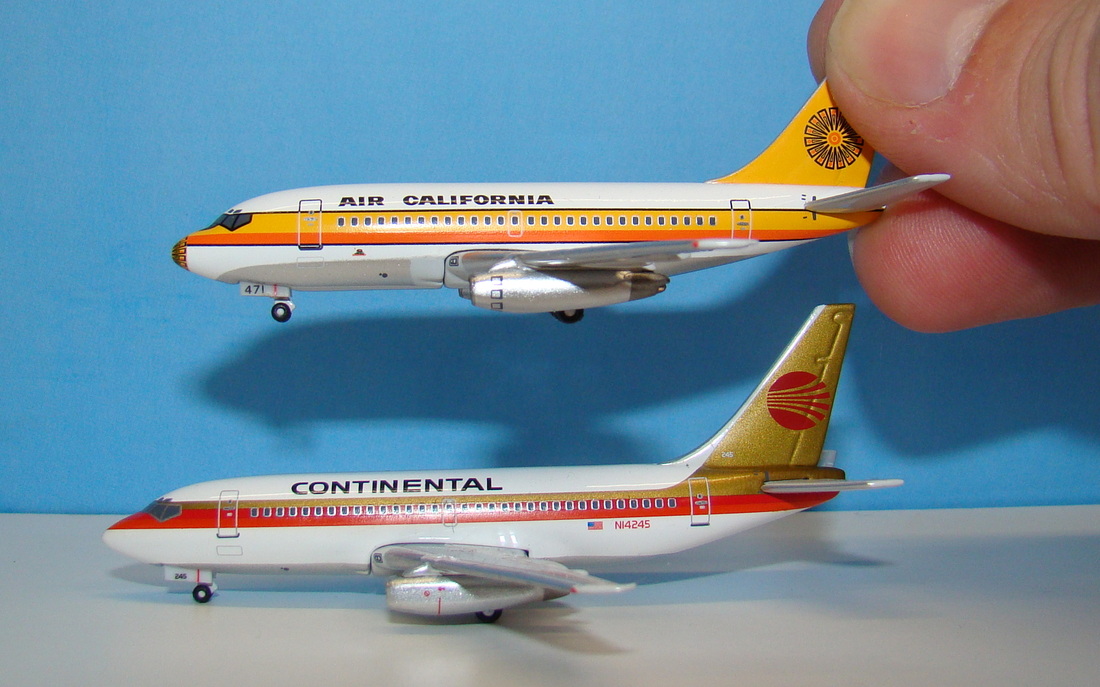 Gemini / Black Box have made 60 737-200s with 6 of these being rebadged as Schucos. The mould is ok but showing its age and not really comparable to the other major moulds. The major issue with the mould relates to the nose which always looks a bit squashed downwards to me. Often Gemini's printing with this mould is poor around the nose - checkout the Aloha example below. Is the cockpit too low or the whole cheatline slanting? There is also a forgiveable seam at the wing root and also a well hidden one at the rear of horizontal stabiliser which is actually slid into the rear fuselage. The engines are also rather odd all round with deep grooves and uneven sides. I am a little surprised that Gemini has continued to use the mould into 2014 however its ok and they don't really produce enough older models to warrant creating a new one. On the other hand they have recently updated the mould in 2016 with a single Pan Am release which had added antenna. It was released at the same time as Aeroclassics Pan Am examples and side by side is obviously inferior. Having said that if they released interesting aircraft on it (like they used to) I'd get them still, but I can't see Gemini really using the mould much ever again.

A year later than Gemini and Seattle Model Aircraft Company had a superior mould on the market. As far as I can tell this mould was also used by Aeroclassics for some time and represents 98 of their 184 B737-200s. At least one model was also produced under the Big Bird name. The mould has a much better nose, no horizontal stabiliser seam and a more detailed rudder. There is still however a seam albeit a quite tidy one around the wings. One thing to bear in mind with these 737s is that they have suffered from Zinc Rot - though personally I've never had a major problem myself and I'd have thought that most Zinc Rot models would have self destructed by now. I have had some landing gear shearing off however and perhaps this is a sign of mild zinc rot?

Comparing the Gemini Mould with the SMA/Aeroclassics Mould you can see how much better the SMA version is:

Herpa's has done its usual - released a new mould and then barely used it. In fact only 5 models have been used with it - 2 from Herpa (Lufthansa and oddly AeroGal) and 3 limited releases by Hogan for All Nippon. Its an odd mould as it just seems wrong somehow in most aspects. The underside of the nose has too strong an upturn and the topside not enough of a distinction between cockpit and nosecone giving it an odd pointy look. On the plus side there is no wing seam yet the tail appears to be a poorly fitted separate piece. The engines also seem too small and the tailcone too big. I've never seen it in the hand but I may buy one if it came up for sale.

The Witty factories B737-200 arrived in 2007 and is a perfectly decent mould. The fuselage shape is good and there is no wing seam. The mould's most obvious failing is the over-sized nature of the nosegear doors - but I can live with it. The mould has been used sporadically under a variety of different Witty brand names from 2007-2014 but following the closing of the Witty factory I doubt we'll ever see it again. 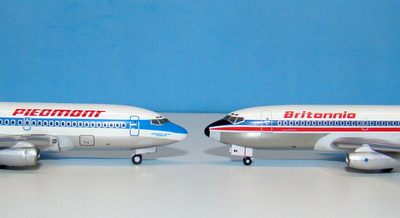 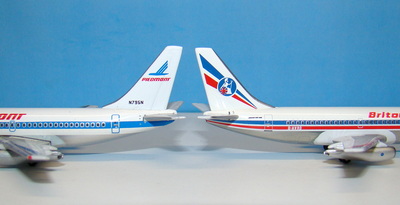 In 2009 Aeroclassics released their own mould for the B737-200 replacing the one they'd been using for years, which seemingly began at SMA. The mould is superb with the primary difference being the elimination of the wing seam. Some of the early examples of the 86 models made so far do appear to have oversized nose-gear doors but none of my examples (or any recent ones) show this feature. Aeroclassics has also produced several models as replacements for Zinc-rot examples on the older mould. This is easily the best 737-200 mould in existence and has had a real resurgence in 2015/16 which is really good to see.
Here are some comparison shots showing the SMA/Aeroclassics Mould 1 versus the Aeroclassics Mould 2:

The newest B737-200 mould is also one of the worst - possibly the worst in fact. The nose looks pointy, the tail misshapen and the engine pylons poorly fitted. It was only used 5 times prior to the end of Jet-X production and 4 times by JC Wings and frankly isn't to be missed.

Jet-X 737-200 Mould
We'll finish off this review with a look at the bottom of the four main B737-200 moulds.
- From left to right we have Aeroclassics 2, SMA/Aeroclassics Mould 1, Aviation 400 and Gemini Jets.
From the bottom the two newest moulds are clear winners with the Gemini coming off particularly badly due to the oddly shaped engines.