Text by R. Stretton
A heavily modified version of this article appeared in the May 2015 issue of Airliner World Magazine.

From 2005 there was once again an influx of new airlines- most of which were low cost carriers.  By 2008 domestic passenger numbers had reached 27.7 million, though this still only represented 17.7% of the population flying compared to over 30% in Brazil (but only 14.4% in China). Competition was fierce amongst the three general groupings of airlines.
First there were the two major players: Mexicana and Aeroméxico. Each had their own regional partners operating branded services whilst Mexicana had also turned its regional subsidiary Aerocaribe into a low cost competitor named Click Mexicana. It used Fokker F100s.
The second group was the surviving start-up full service airlines, primarily Aviacsa and the long serving Aero California.  Lastly the third group included a horde of new low cost airlines such as Azteca, Avolar, Aladia, Aerolíneas Mesoamericanas (ALMA de Mexico), Interjet, VivaAerobus and Volaris.  Once again, as in the mid-90s, this state of high competition coincided with a perfect storm of other troubles.  This time it was climbing oil prices, a worldwide recession, a swine flu epidemic and rising drug related crime, which all combined to damage both business and tourist traffic.  These factors unsurprisingly caused passenger numbers to fall and operating costs to increase - leading to a realignment of the airline scene. ​
Mexicana reoriented its low cost Click Mexicana into a full service regional called Mexicana Click with a new fleet of Boeing 717s. The remaining smaller legacy carriers were already struggling to survive especially with their relatively fuel thirsty fleets of DC-9s and early model 737 Classics.  By the end of 2009 both Aero California and Aviacsa had ceased operations. They were joined by several of the less well financed low cost airlines, namely: Avolar, Aladia, ALMA de Mexico and Azteca.  Despite this loss of low cost airlines, by July 2009 the survivors had still managed to take 42.5% of domestic seat capacity.  Just prior to Aviacsa's demise this capacity was shared as follows: 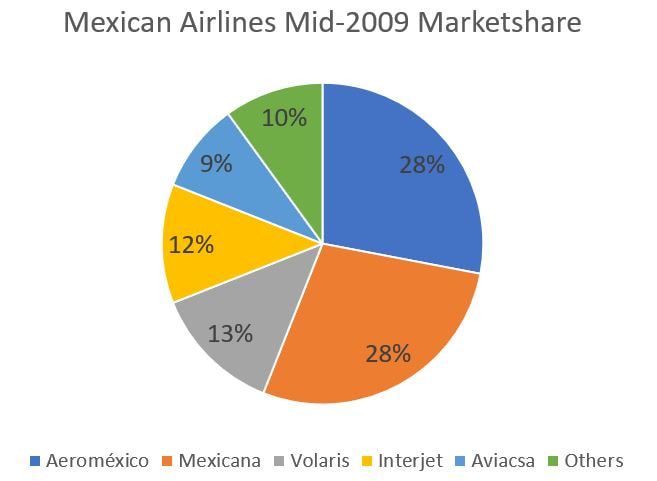 In the preceding years Aviacsa's market share had plummeted (from about 15% in January 2007 to 10% a year later) whilst both Volaris’ and Interjet's share had climbed rapidly from around 5% to 10-11% in the same period.  Despite this rationalisation of the Mexican industry worse was to come.  Crippled by huge debts, and unable to successfully renegotiate labour costs with intransigent unions, Mexicana shut down at the end of August 2010, dragging its profitable Mexicana Click and Mexicana Link operations down with it.  There had already been ongoing discussions about a merger with Aeroméxico but the latter airline profited more from the collapse of its long time companion than it would otherwise have from taking it over.  However, Mexicana had, through its subsidiaries, grown its domestic market share to 30% whilst also holding 20% of the international traffic.  Its disappearance assisted the remaining airlines back to profitability in a market which still had not recovered the passenger numbers of 2008.

Only one year after Mexicana’s demise the domestic market had recovered the lost capacity with Interjet the major winner.  It took over many of the vacant slots at the vital Mexico City Airport to expand its operations from 8 to 23 cities and 27% of the airport's domestic capacity.  Volaris (14-17%) and VivaAerobus (10-13%) also grew their overall domestic market share whilst Aeroméxico's share increased from 29-37%.  Volaris and Interjet focused their expansion primarily on transborder international routes however it was the US airline's that were the real winner in this area increasing their market share from an already impressive 73% to a dominant 84%.
By 2012 the Mexican market was back into double-digit growth with a healthy legacy carrier and three strong, low cost airlines.  Annual domestic passenger numbers reached 28.1 million people in 2012 up from 17.6 million in 2002.  Low cost airlines had meanwhile grown their combined market share to 57%.  The detailed breakdown of market share in 2012 was as follows: 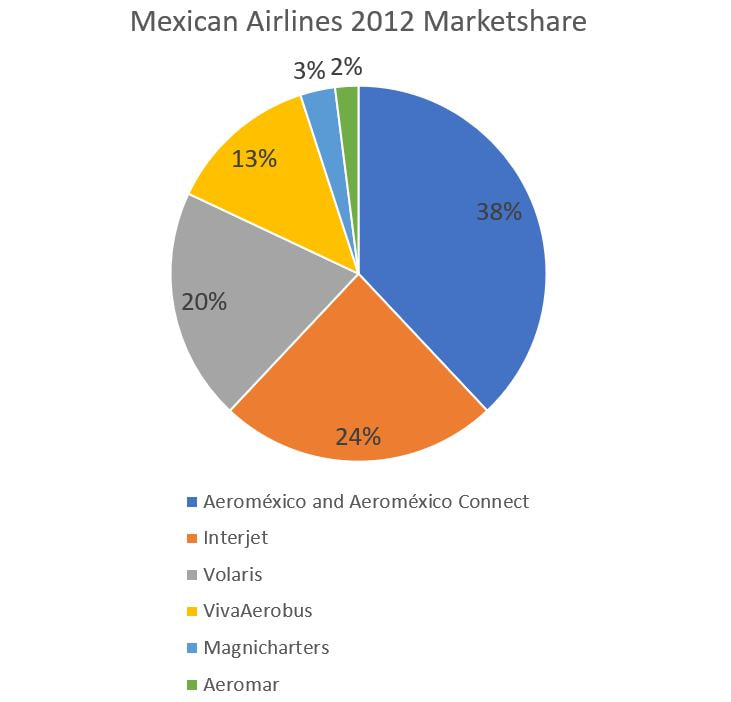 Despite these figures, growth in the Mexican market has been relatively slow compared to that in the rest of neighbouring Latin America.  It has shown only 60% growth since 2002 compared to 150% growth in Brazil since 2005 and 80% in Colombia since 2008.  Even so Mexico currently represents the 10th largest aviation market in the world and there is plenty of potential for growth if the economy continues to remain stable. 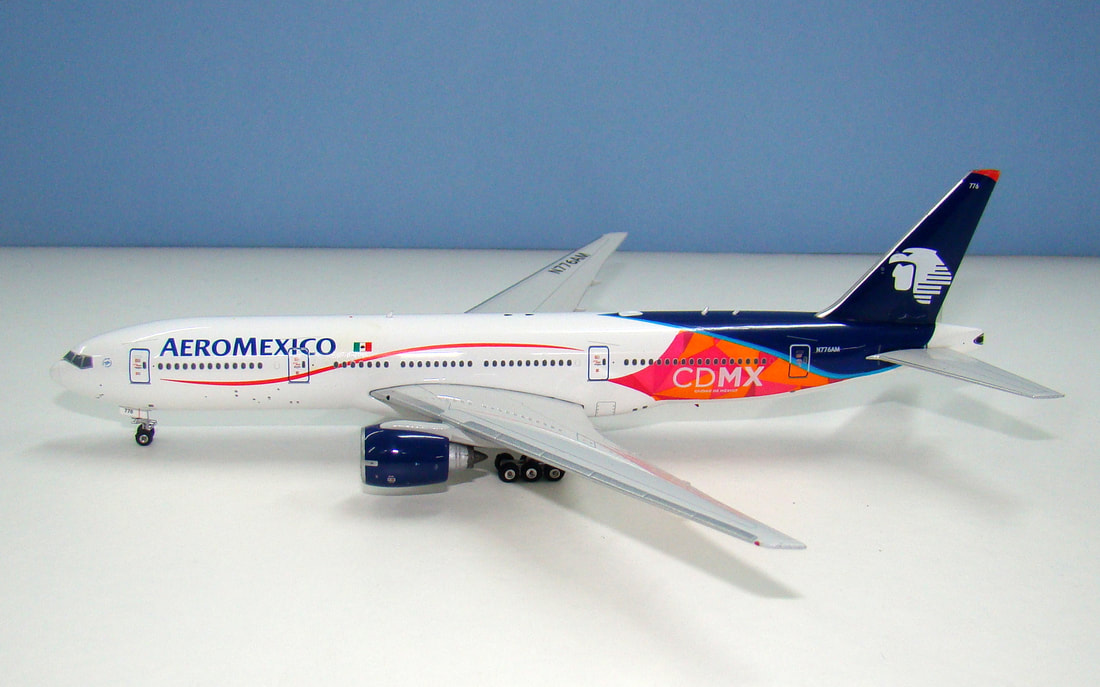 One factor that will determine growth and has been an ever present major factor in the industry's travails has been capacity at Mexico City Airport (Aeropuerto Internacional de la Ciudad de México [AICM]).  In 2009 AICM had 43.4% of routes, 65.8% of flights and 67.7% of passengers in the entire nation, dwarfing the next three biggest airports at Monterrey, Guadalajara and Cancun, none of which was over 18% for any of the metrics.  AICM has only two operational runways and is massively slot constrained.  It has been operating well beyond its capacity for many years and as of 2011 Aeroméxico still had nearly 50% of available slots, seriously constraining competition.  Fortunately after many years of indecision a new airport for the capital has been announced with construction due to start in 2015.  When open in 2018 its initial three runways will have a capacity of 50 million passengers per year.  With the capacity break at AICM finally removed and four healthy major airlines it appears for the first time since deregulation that aviation in Mexico will truly begin to deliver on its promise to assist in enabling the nation to develop effectively.