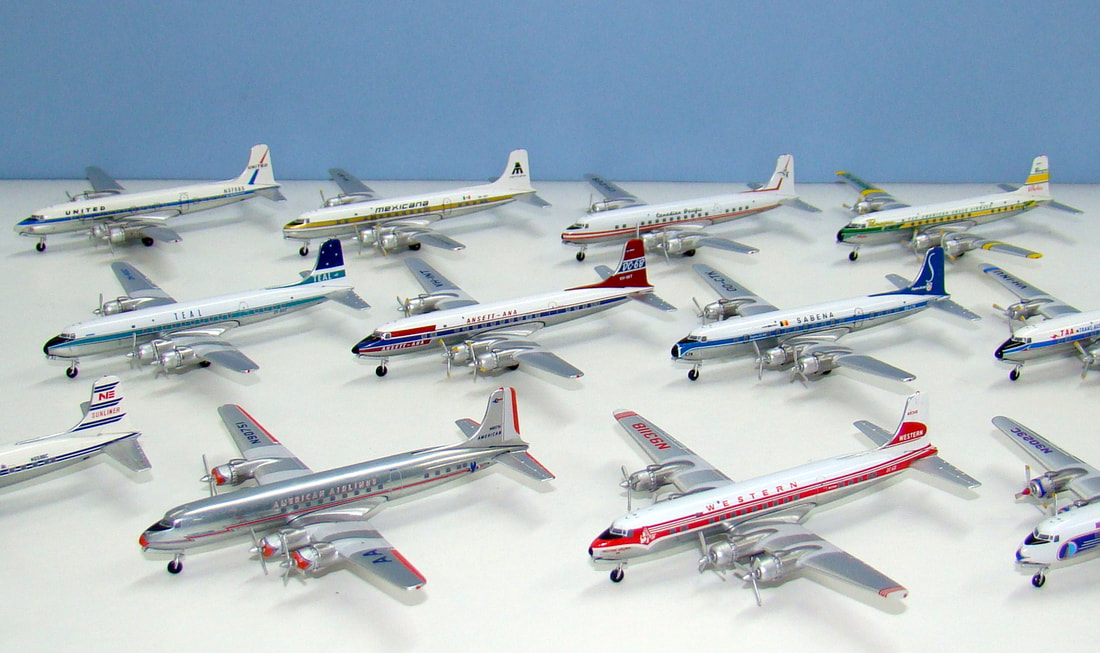 The great duel between Douglas and Lockheed during the late 40s and 1950s is well known and both companies held the margin of superiority at points during the period as they raced to push piston engine technology to the limit. However although the DC-6 lineage doesn't really approach the Connie for pure beauty the DC-6A/B was probably the most efficient of all the variants of all the types. Certainly the DC-6s outlived the newer DC-7s in airline service due to the 7s temperamental engines, and many mainline trunk carriers like Delta and United continued with their DC-6s into 1967. Several airlines converted their DC-7s to cargo aircraft only a few years after their delivery.

A short nose DC-6 without radar fitted. Photo by Bill Larkins from Wikipedia

A long nose DC-6 with radar fitted. Photo by JetPix from Wikipedia

As of October 2017 in 1:400 scale there have been 92 DC-6s released across 5 different moulds. As you'd expect most of the running has been made by Aeroclassics but there has been notable activity by others too and a good deal of mould sharing as follows: 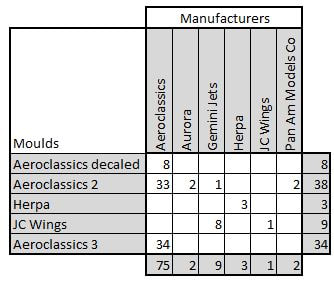 The first 8 were some of Aeroclassics first models and used decals. It seems unfair to complain about them as they were the forebears of many great models. In addition they were made in small numbers and are very rare by now. If you own one see it as a piece of die-cast history.
Aeroclassics Mould 2

In 2004 AC released a second mould with tampo printing, which by modern terms has many failures. They produced many great schemes and 39 models with this mould until 2006 and I still own 2 of them as replacements are sadly lacking. A few of the models were released for Aurora (Delta Air Lines), Pan Am Models Co and one for Gemini (American Airlines) but they all use the same mould. Its not a great mould even if it didn't have a very big seam (like many of the earlier Aeroclassics prop moulds). However unlike the L-1049 and Viscount moulds the shape is also pretty poor which no doubt explains why it has been superseded by a newer mould.
Herpa

From 2006 Herpa came out with their own mould and produced examples of DC-6s in the colours of the USAF, Cathay Pacific (twice) and Red Bull. In typical Herpa fashion this was it. I don't own any of these models though from the photos I've seen the mould looks great except for very simple undercarriage legs. As often is the case with Herpa in 1:400 the paucity of releases means that sadly their output can be largely ignored.

Gemini and JC Wings have in recent years taken to some mould sharing since they are made in the same factory. In 2010 they came out with their own new DC-6 mould and it is a beauty - all except for one major problem that is. It sits at a ludicrous tail down angle as the main gears are far too short. DC-6s did have a tendency to sit low at the back but never to this degree. I really don't understand what they are thinking with this. I own 3 of their new DC-6s but can't bring myself to replace the old AC Alaska I have with their new version due to this reason. Apparently it is fixable by removing the gears and adding something in to make them taller but should we really have to customise pre-built die-casts - no we shouldn't! Regardless of this fault, which seems to have gotten worse over time rather than better (see the Eagle JC Wings release below and the later Delta Gemini), Gemini keep on pushing out the odd new DC-6 release and they have now made 8 models (JC Wings has made only 1).

The main gear problem is a major failing imho and here is my Delta Gemini so you can see what I mean. Compare it to the horizon:

Fortunately in 2010 Aeroclassics also produced a new DC-6 mould and its a real beauty, not suffering from the Gemini issues. Sadly it has been rather under-utilised. AC started by beginning to replace their old DC-6s but stopped after producing only some United, Northeast Airlines, Trans Australia, Ansett and Civil Air Transport variants. I suspect it wasn't a great seller as we've seen rather a lot of different UA and NE reg change variants. Thankfully in 2014 Aeroclassics started releasing new DC-6s again and there has been a reasonably steady stream since. They still haven't quite replaced all the old versions however and lots remain to be done. The earliest releases all featured radar equipped DC-6s with longer radomes but since production has restarted it has only been short nosed radar-less DC-6 that have been output. I'm not sure what's going on there, perhaps this is really two moulds and the longer radar equipped one is no longer available?

Back to the mould and the 2010 Aeroclassics DC-6 is about as awesome as a prop-mould can get. The nose and cockpit region is perfect, whilst the long thin nosegear bay doors and nosegear itself are finely detailed and remarkably robust. No stupid rolling gears here and the aircraft is better for it. There is a small seam line (as this is a cradle mould) but it is discrete and not an issue. The wings are great and as Aeroclassics commonly does with its props the engine cowlings are plastic addons, which allows for greater detail. Lastly the rear fuselage and stabilizers are pretty much perfect. There really isn’t anything substantial to complain about with this mould. It is one of the best.

I should mention that this mould's length indicates it represents a DC-6A/B rather than the initial production DC-6. The difference in 1:400 scale would be about 0.5cm.