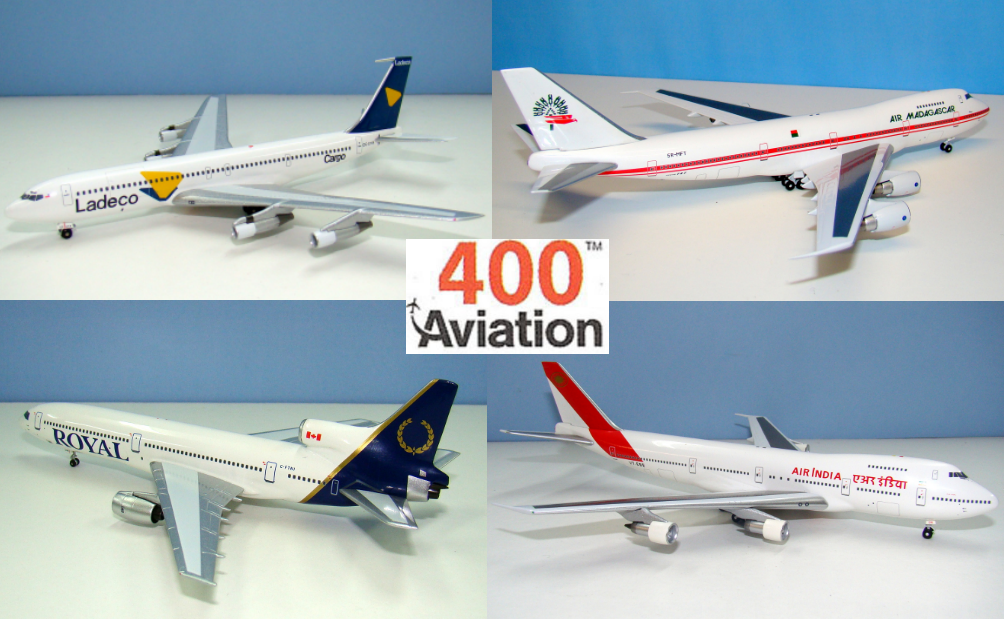 INTRODUCTION
Aviation400 is a brand name that has reappeared in recent years attached to a manufacturer of mainly modern widebodies (A330s, A350s, 777s), with added beacon lights. However, this is far from the first usage of the brand name, which originally was related to the important Jinbo factory and was the first brand of the Witty lineage.
​To understand the story of the first brand named Aviation400 in 400 scale it is necessary to understand the relationship between several of the major parties in 400 scale during the early 2000s and the Jinbo factory they used to make the models.
THE JINBO FACTORY & WITTY INDUSTRIAL
​The Jinbo factory, located in Donguan, Guangdong, was operated by a Hong Kong company called Witty Industrial Co. Ltd. At the time it was not unusual for Chinese factories to be owned by Hong Kong companies but Chinese law required a partnership, in this case between Witty and Jinbo, although the Chinese partner was usually silent.
​The Jinbo factory’s primary customer from 2000 was Aeroclassics, and they were later joined in 2002 by Big Bird and Seattle Model Aircraft Company (SMAC). Witty grew and opened a second factory, known as Weida, and took on further customers in the form of Inflight Models – a 200 and 500 scale brand.
By 2006 neither Big Bird or SMAC still existed and increasingly Aeroclassics relationship with the owners of the Jinbo factory became testy. This wasn’t helped by financial pressures at Witty Industrial. Witty had originally been formed by two partners who had taken a HK$5 million loan from HSBC in Hong Kong to start up the company. They were joined by another pair of partners but the company had been operating at a loss. In early 2007 one of the original partners was bought out and the remaining original partner didn’t see eye to eye with the other pair.
​For Aeroclassics there were concerns about the security of its moulds and the priority given to its model releases over other customers. This tension grew far worse in 2007 when Zinc Rot began developing in models built for Aeroclassics, Big Bird and SMAC at the Jinbo factory. The relationship between Aeroclassics and Witty broke down and the end result was that Aeroclassics moved to the new Aoxiang factory that year, partnering with the remaining original Witty partner.
CREATING AVIATION400
The departure of Aeroclassics from the Jinbo factory left a huge 400-scale hole in production since Aeroclassics was accounting for nearly 80,000 models a year. To fill the vacuum Inflight partnered with the two remaining Witty partners to create a new brand, to be known as Aviation400, which released its first models in late 2007. 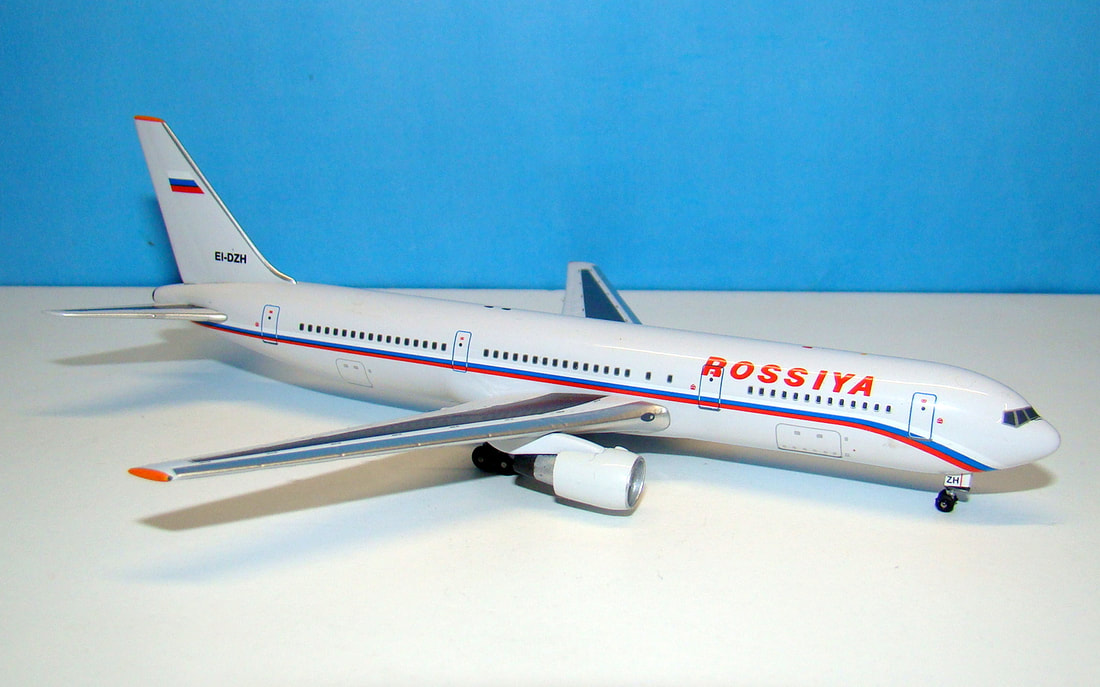 Above: This 2008 Aviation400 release (AV4763010) clearly uses the Big Bird 767 mould
​The Jinbo factory already had access to the Big Bird 747s and 767-300, which had always been owned by the factory although widely used by Aeroclassics and Big Bird. The first announced Aviation400 models used these existing moulds and were a quartet of British Airways ‘World Tail’ 767-300s. Some of the other early AV400 models, such as a BOAC 747-100, used previous unsold stock with minor changes.
A NEW 747

Above: 750 units were made of this Alia (AV4742002) as AV400's 2nd release on the new seamless 747 mould
Quickly Aviation400 released onto the market their own updated 747-100/200, which was basically a modified version of the original Big Bird 747 with the cradle fit wing mount replaced by a seamless slot in wings setup. The first four models AV4742001-2004 were released in 2007 and featured releases representing World Airways, Alia Royal Jordanian, Kuwait Airways and Nigeria Airways.
This mould is, in 2022, still probably the finest full length 747 in 400 scale but in comparison to the old Aeroclassics and Big Bird releases it has gotten very little usage, and when it has been used it has been so for often relatively obscure airlines. Accordingly, it is nowhere near as well known or celebrated as the Big Bird mould it was no doubt developed from.
Impressively AV400 would make multiple seamless mould variants for the 747 covering the 747-100/200/300/400 and 400F. 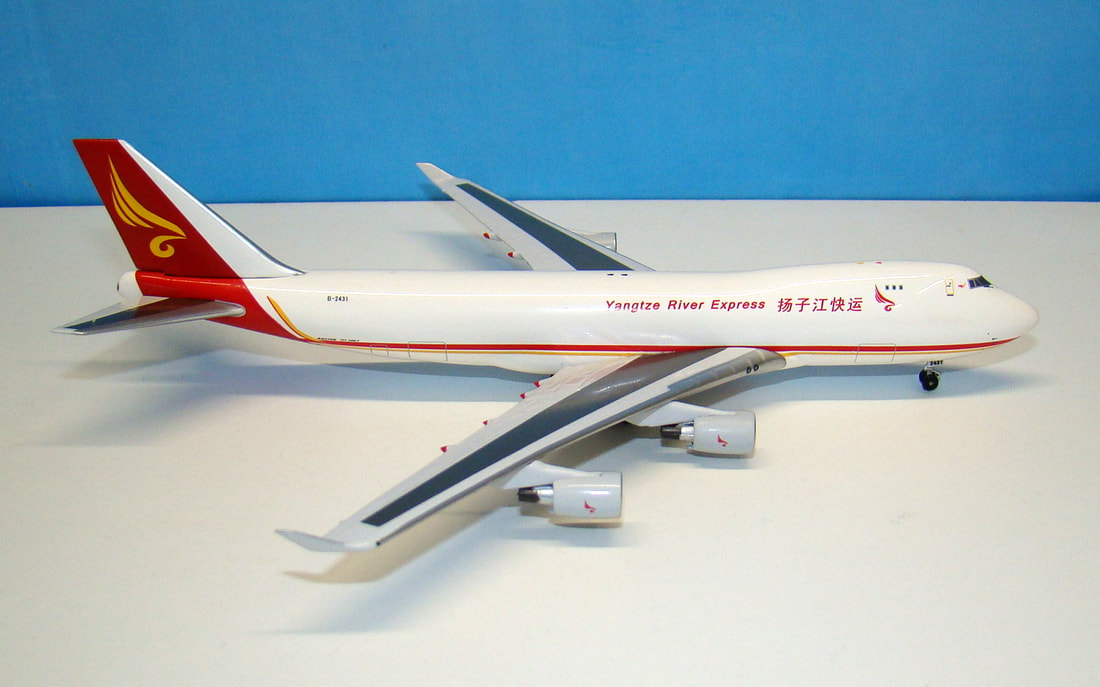 MOULD CLONING
If Witty could be praised for its 747s some of its other behaviour was much worse. At some point before or during the process of Aeroclassics leaving the Jinbo factory several Aeroclassics moulds were illegally cloned and recreated. These included the Boeing 707 mould, which was altered from a cradle mount to a slot in wings mould and passed off as an Aviation400 mould. 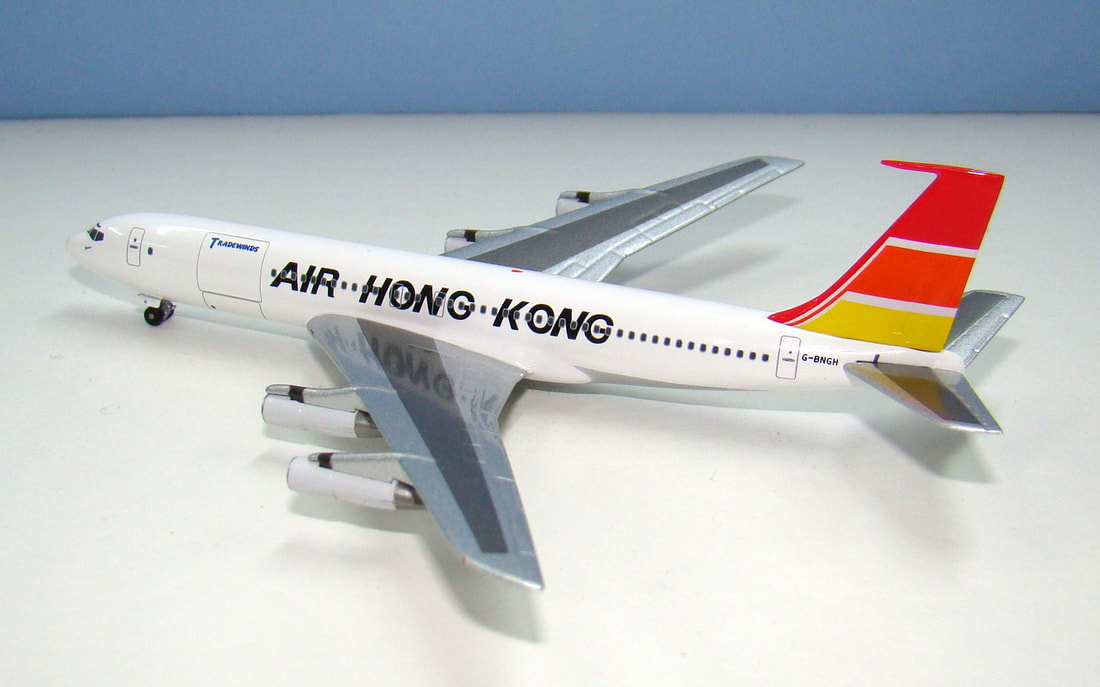 The cloned but very nice AV400 707. In this case a 2010 release (AV4707014)
Unsurprisingly Aeroclassics were less than pleased with this, as well as some perceived sabotage of their own moulds when they were returned to them, and took legal action against Witty. Other seemingly cloned moulds included the Convair 880 and 990, and Ilyushin IL-76 although these never appeared under the Aviation400 brand name. 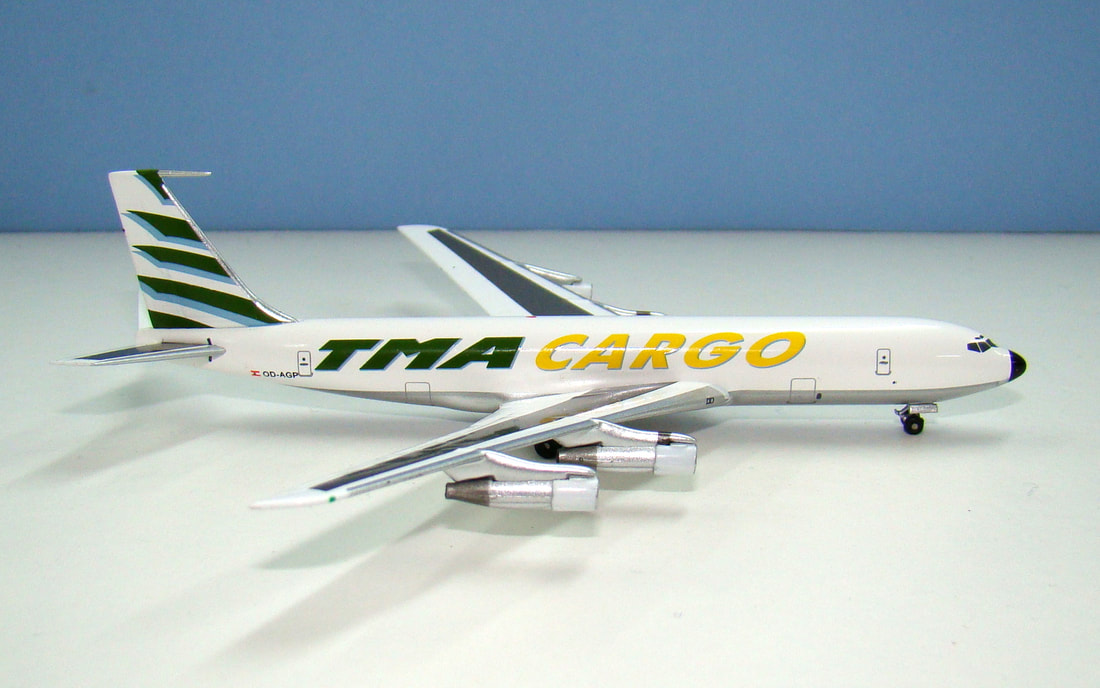 AV4707012
​Regardless of legal action these cloned moulds would continue in use to Aviation400’s successor brands – Witty Wings and Apollo Models. Aviation400 tended to focus on relatively obscure cargo 707s with its moulds and not classics passenger versions.

Aviation400 also sometimes created a standard box for 3 or 4 models creating something like a set, but with the models sold separately. They did this for 707s and other types like the 747s:
SCALED DOWN INFLIGHTS
A third source of moulds came from the Inflight stable where several moulds were downscaled from 200 to 400 scale. These included the Boeing 737-200, 700, 800 and 900 plus the McDonnell Douglas DC-10.

The 737 moulds were not particularly well thought of at release and time hasn’t improved opinions. The primary issues are due to the shape of the nosecone and huge nosegear door size (especially on the series 200s). Nonetheless the 737NG versions at least would get continued usage well into the 2010s.
Below: Even though the 737-200 isn't great some models like this house colours are highly prized still, as nobody else has made them.

​The DC-10 has a better reputation and was produced prior to Aeroclassics creating its own version of the aircraft. Aside from rather long undercarriage it is a decent representation and a good alternative to often hard to find Aeroclassics tens. Aeroclassics DC-10 came out soon afterwards and they made a point of producing many of the same schemes as AV400 - Iberia, SAS, Sabena, Ghana, VASP, Ecuatoriana etc. 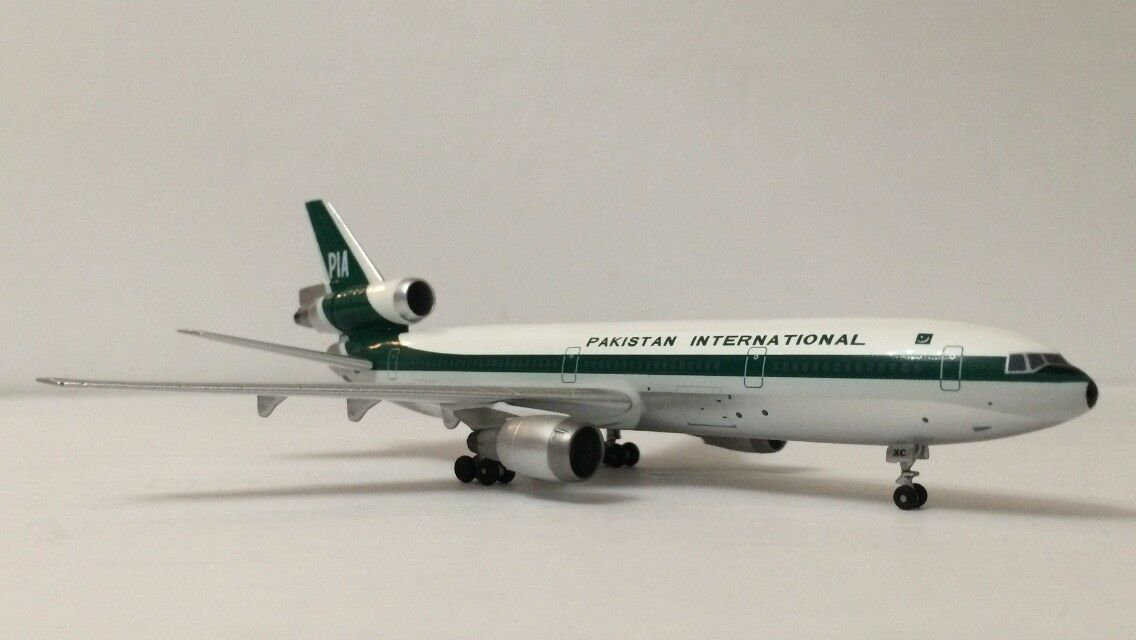 AWFUL AIRBUSES
An all-new mould set created for Aviation400 was the Airbus A319/20/21, but unfortunately all three of these moulds are very poor. Fortunately, they saw extremely limited usage with only 10 releases under the Aviation400 brand name and only 8 further models made for Witty/Apollo.

NEW TRIJETS
Other new production moulds made by the Jinbo factory were more successful and included Boeing 727-100/200s and Lockheed L-1011 Tristar. 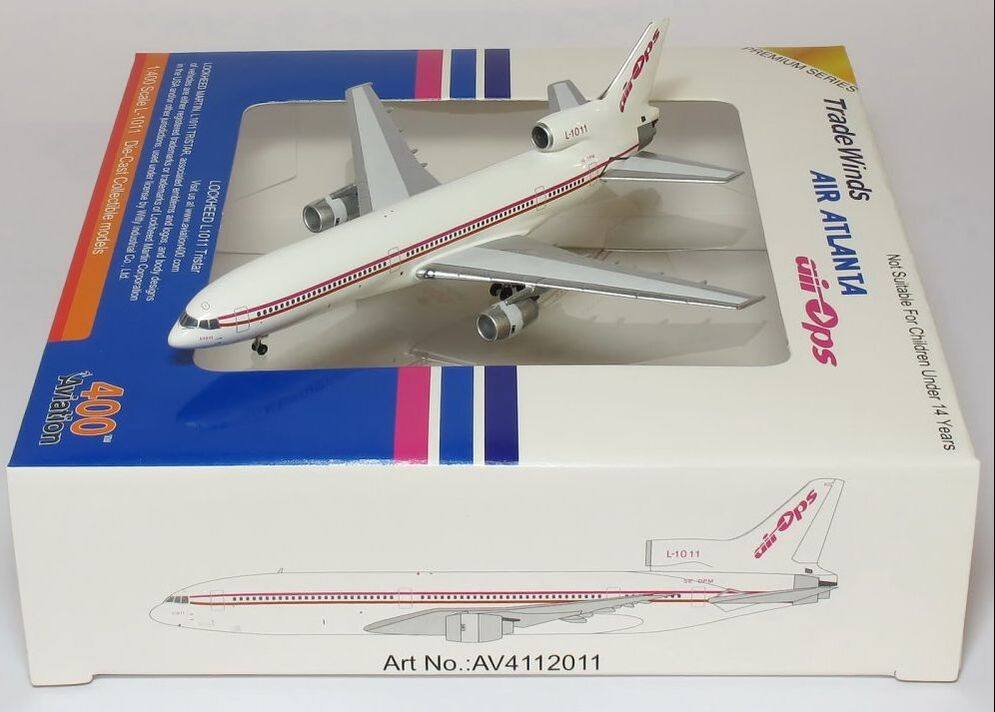 ​The L-1011 Tristar a particular triumph and until the arrival of the NG Models version was the best L-1011 in 400 scale. It certainly was much superior to the Blue Box mould and better also than the decent Dragon Wings and Gemini Jets versions. Sadly, as with several of the new moulds created by AV400 usage of the Tristar was erratic and the subject matter it was used for often rather esoteric. As with the 747 moulds it limited usage meant it never gained the plaudits it deserved. 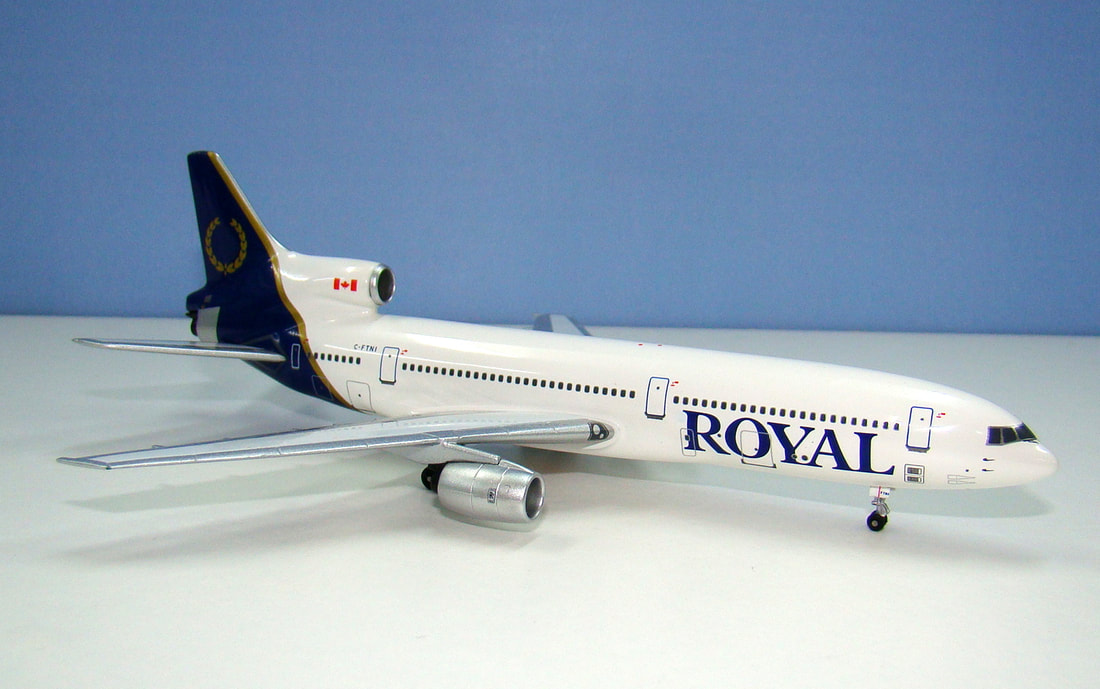 AV4112002 - a 2007 release
Likewise, the AV400 727s also have some very good characteristics and are seamless moulds but once again only got limited usage. The series 100 only ever got 6 models produced on it. Although the first represented the Boeing house colours prototype, and is a very sought-after model, 2 of the others were Northeastern Airlines and two more USAF examples. 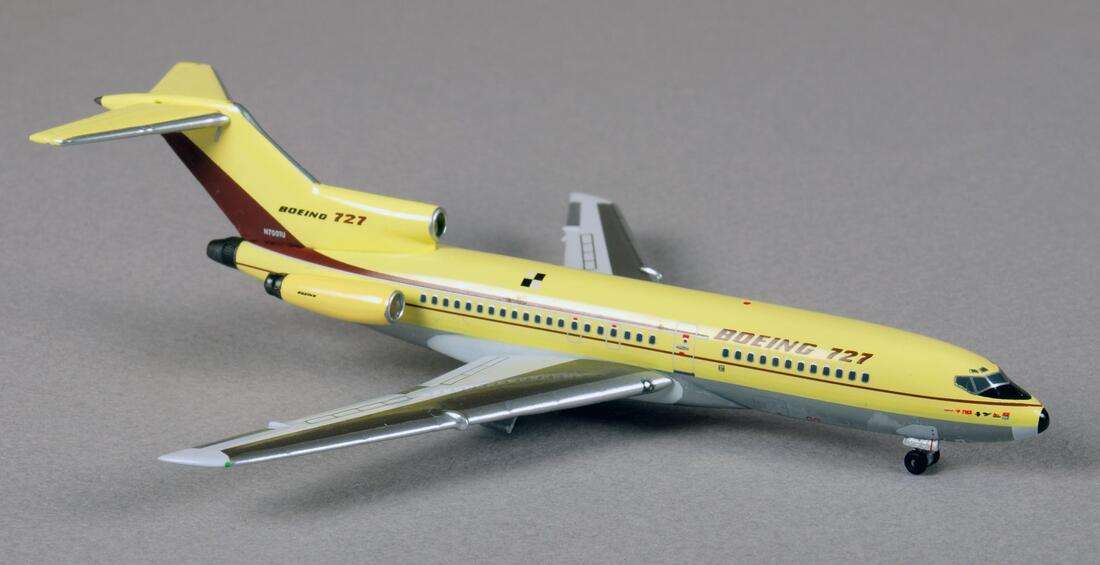 Above: This house colours model is hard to find and one I'd love to get. Photo courtesy of Doug Seeley.
​The 727-200 has received more releases but still has had a very limited run out. Both moulds are excellent except for being let down by having the incorrect tail chord. The rear margin of the 727 tail should not be at the same angle as the forward margin and on these moulds it is.
RISE & FALL
​Aviation400 production ramped up in 2008 and 2009 but tailed off significantly in 2010. This appears to be a symptom of the financial frailty of Witty Industrial. The Jinbo factory had been closed in late 2008 after failing to be able to fill the hole left by the Aeroclassics production departure.  This left all Witty production at the Weida factory and the AV400 brand name went out of use in 2010. 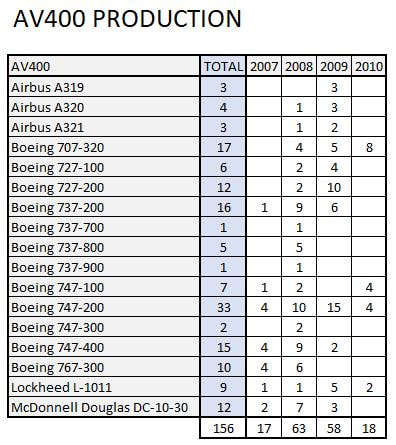 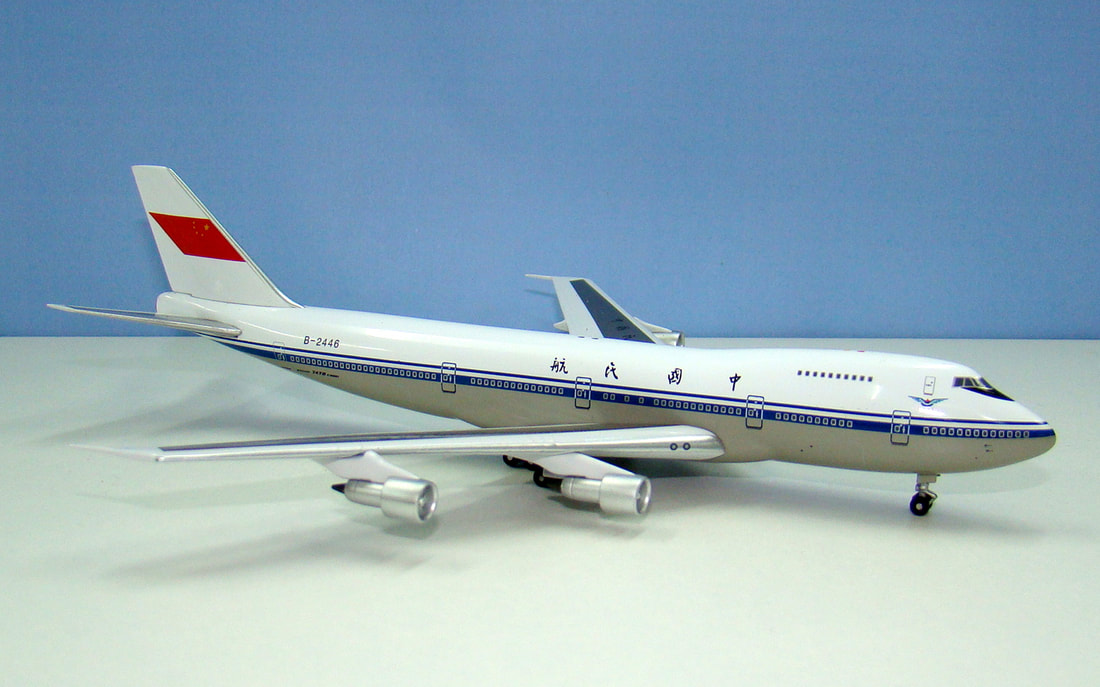 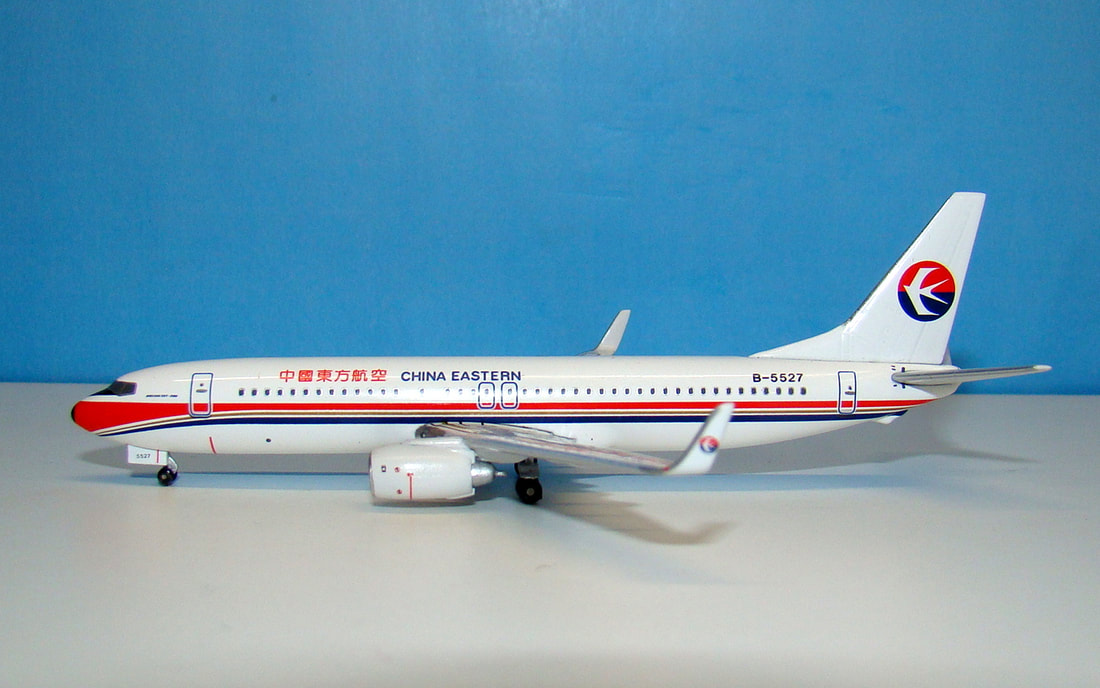