The A330 shows what is probably the heaviest competition among all 400 scale types with no less than 6 active moulds available since 2019. There have been a lot of releases as you can see from the below tables (figures correct as of September 2021) and some mould sharing (especially of the original 2003 Gemini mould):

NOTE: This review does not include the A330F, which has its own review here:
A330-200F Mould Review

Before we begin looking at the moulds here is the real thing with the different engine options (left series 200, right series 300):
Rolls-Royce Trent engines:

Dragon's moulds for modern aircraft types are rarely very good and their A330 is no exception to that. Obviously Dragon models come with all the usual provisos as regards plastic parts however that in itself isn't really a major problem. Considering its age it isn't a bad mould but in detail the shape of the nose, especially the underside isn't very good. In addition the chunky nosegear is always an issue. The mould has a small wing seam at front and rear. Early versions of the mould have a seam at the horizontal stabiliser too and the earliest have very simple maingear without gear doors.

In truth this mould has been obsolete for many years now but this hasn't stopped Dragon from producing quite a few models of both series 200s and 300s into 2012. Nowadays there is so much choice when it comes to A330s that rarely will you need to consider a Dragon Wings example although some, like Skyservice, still remain to be made on an updated mould.
Herpa / Hogan Mould (2003)

In classic Herpa style they have dabbled with the A330 in 1:400 and produced a mighty ten examples of the type, which can hardly be a useful recoup of the development costs? Anyway we shouldn't be sad about that because their mould is pretty poor. Interestingly the nose area suffers from some of the same issues as the Dragon, being too curvy at the bottom. It may even be the same basic mould but its hard to say for certain without having seen them in person. Quite often it appears the tail fits rather poorly into the fuselage too. The ten Herpa models are spread across four years until 2007 and cover all three engine options. The GE and PW engines appear ok but the Rolls Royce Trents on their Cathay Pacific and Premiair aircraft are far too small. Again this is a mould worth avoiding in my opinion. This Etihad is probably the best example they have made - it at least has decent cockpit printing which several of the others do not. Hogan don't seem to have any issues with the mould sadly as they have seen fit to use it four times since 2010. 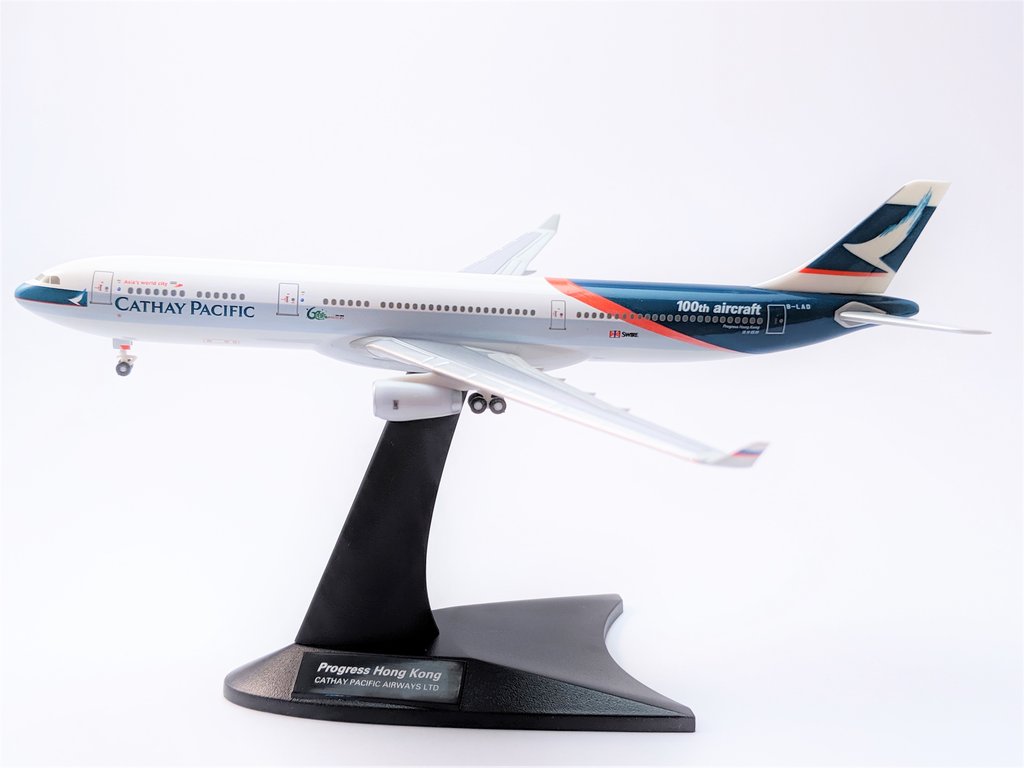 Gemini's early A330 appeared soon after the Dragon and Herpa versions and is an improvement on both of those though pales in comparison to the newer moulds. Possibly the only superior points of the other early moulds is that they are seamless which can't be said about this Gemini mould. There is a clear crescent shaped seam running in front of the wings, which is a bit distracting but roughly matches the natural fuselage contours so isn't heinous. At least this mould does a passable impression of an A330 nose though it appears there may have been some modifications to the early mould. Originally the nose wasn't very pointy but soon a much sharper nose appeared. This is almost too pointy I think but depending on the printing can look pretty decent. Gemini have worked to improve the mould adding rolling gears in 2012 and antennae in 2014. It was interesting that they stuck with a seamed mould (especially as JC has recently abandoned it) for so long, however in December 2015 their Delta release switched to using the new JC wings mould. Personally I avoid this mould but that's as much because not many aircraft that interest my collecting criteria have been made on it as because I have issue with it. It is ok but obsolescent nowadays and there are many better options.

The mould has been used quite prolifically as follows:

Phoenix broke away from the old Gemini A330 mould in 2010 with a real stunner. Their A330 is excellent - perhaps even better than the later Aeroclassics, though its a very close run thing. Personally I prefer the Phoenix cockpit windows and think that the overall shape reproduces the real thing very well. As with their other moulds (except Aeroclassics) they have added satnav humps and antennae in recent years. Although this is a very good mould it isn't perfect. The undercarriage is an inferior area. The nosegear doors are too large and the maingear is chunky and poorly detailed. The crease after the wing is also missing and the fuselage underside is poorly detailed. I think whether you prefer the Phoenix or Aeroclassics mould is a matter of quite subjective opinion but its hard to be harsh with either of them.
I have reviewed the mould in detail here:
Chengdu Universiade: Sichuan Airlines Airbus A330-343 B-5945 by Phoenix
One thing to be aware of are Phoenixes' recurring quality issues. With the A330 that can mean poorly fitted wings especially at the rear where they join the fuselage. Additionally the Phoenix A330-200 has incorrectly over-sized horizontal stabilisers. 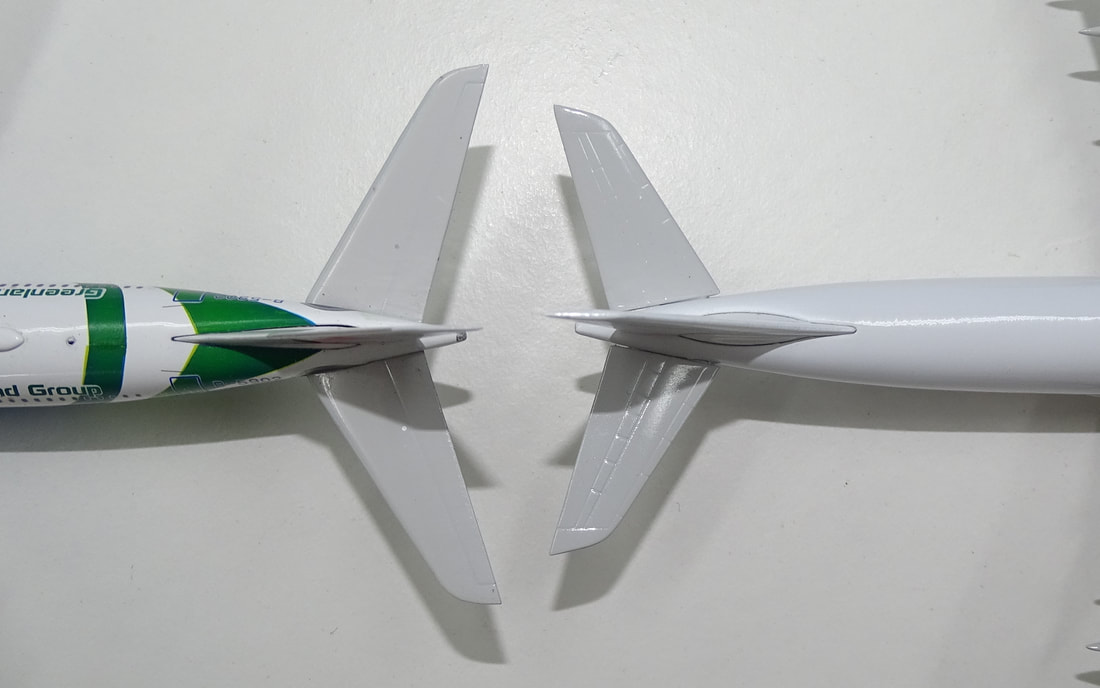 Aeroclassics followed up its BabyBus range with BigBus A330/340s in 2011 and they are superb. The mould is excellent being completely seamless and perfectly proportioned. The nose is perhaps not quite as well defined as the Phoenix and the detailing of the cockpit windows not as nice but these are minor points. For me the cockpit windows are just a bit too small and on some models they have a heavy outlining also. One of the moulds strongpoints is the undercarriage. Be aware that Aeroclassics doesn't believe in aerrials in 1/400 scale so if that is an issue for you buy elsewhere. Aeroclassics continues to release A330s and has also released a couple of American Airlines aircraft under the BlueBox brand.
I have reviewed the mould in detail here:
Eurowhite Shamrock: Aer Lingus A330-302 EI-EDY by Aeroclassics
JC Wings Mould 2 (2014)

JC Wings ditched the Gemini A330 in favour of their own mould a few years ago and finally in December 2015 Gemini released its first A330 using this mould too. Initially this looked like a great mould and overall it isn't bad compared to the competition, although in detail it is inferior in most ways. One of the issues is the undercarriage. The nosegear is a little misplaced and too short, whilst the maingear is too short and rather chunky.  At least in the first few years of usage there were major issues fitting the slot in wings correctly. The results can look bizarre - like this:
Then again it isn't always an issue and in recent years the problem seems to have largely gone away. As you can see the two China Eastern's below don't have this problem. So choose carefully. I have reviewed the mould in detail here:
Still Lucky: Lucky Air Airbus A330-343 B-1059 by JC Wings
Panda Models Mould (2016)
Panda models debuted a selection of new A330s towards the end of 2016: They also have an A330F mould, which I have reviewed in its own A330-200F review page. There is a suspicion (actually it’s rather blatant) that Panda Models has been cloning Aeroclassics moulds, enabled by past relations with Aeroclassics. That suspicion certainly carries over to the A330-200/300, however they aren’t exact copies of each other. There are differences and in detail the moulds are as different as any from each other.
This mould is very good, as good and sometimes better than the competing Phoenix and Aeroclassics moulds. I have reviewed it in detail here:
Birds of a Feather: China Eastern Airbus A330-300 B-6120 by Skywings
Growth Room: Airbus Industries A330-342 F-WWKA by Panda Models
Aviation400
With their interest in modern widebodies it was little surprise that an A330 was one of the first moulds that the new Aviation400 produced although it has not gained the same plaudits that their A350 has - partly because it has mainly been used for Chinese examples and partly because it isn't anywhere near as good. I have reviewed the mould a few times in detail and I find it is roughly on par with the JC Wings mould in being the weakest of the 6 available moulds. See reviews here:
People’s Propaganda: China Eastern Airlines Airbus A330-243 B-5931 by Aviation400
Wuliangye: Sichuan Airlines Airbus A330-343X B-5923 by Aviation400
One a more positive note AV400 were the first manufacturer to produce the A330MRTT (Gemini and NG have subsequently followed suit) with all the additional add-ons and did a very fine job of it.
NG Models (2019)
Given the strong interest in the type it should have come as no surprise that one of NG Models first moulds after their 757 was the A330-200/300, which I was lucky enough to be able to review samples of in April 2019. See here for my original reviews of the sample moulds:
NG Mainstream: A Sixth A330 in 1:400 Scale
The moulds are excellent and NG has used them quite heavily to date so that moulds have already been used as heavily as the Panda and Aviation400 moulds although they are both older. I have reviewed the NG Models A330 in detail here:
Etihad Airways | Airbus A330-243 | A6-EYH | NG Models

For a slightly dated comparison of the four active A330 moulds in 2017 (Aeroclassics, Panda, JC Wings and Phoenix) use the button below to take you to a detailed review:
Comparing A330s - 1/400 Scale Detailed Mould Review
For a more up to date video comparison of A330-200s including the Aviation400 and NG models moulds see here: