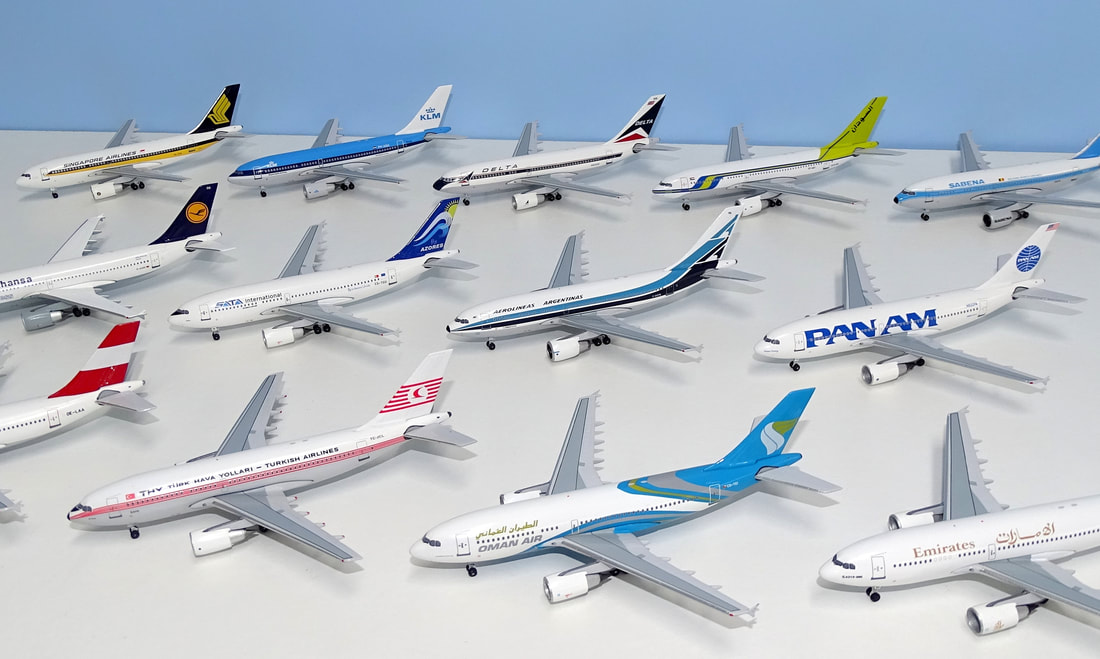 The A310, developed from its larger brother the A300, was Airbuses first diversification of its portfolio. Certainly in comparison to its rivals, the 757 and 767-200, it doesn't strike you as a looker, however in the right light it has a certain majesty about it. It was produced in two versions: the series 200 was a competitor for the 757 and 767-200 whilst the series 300 was a match for the longer 757 routes and the 767-200ER. So it is against the Boeing relatives that it be best judged. 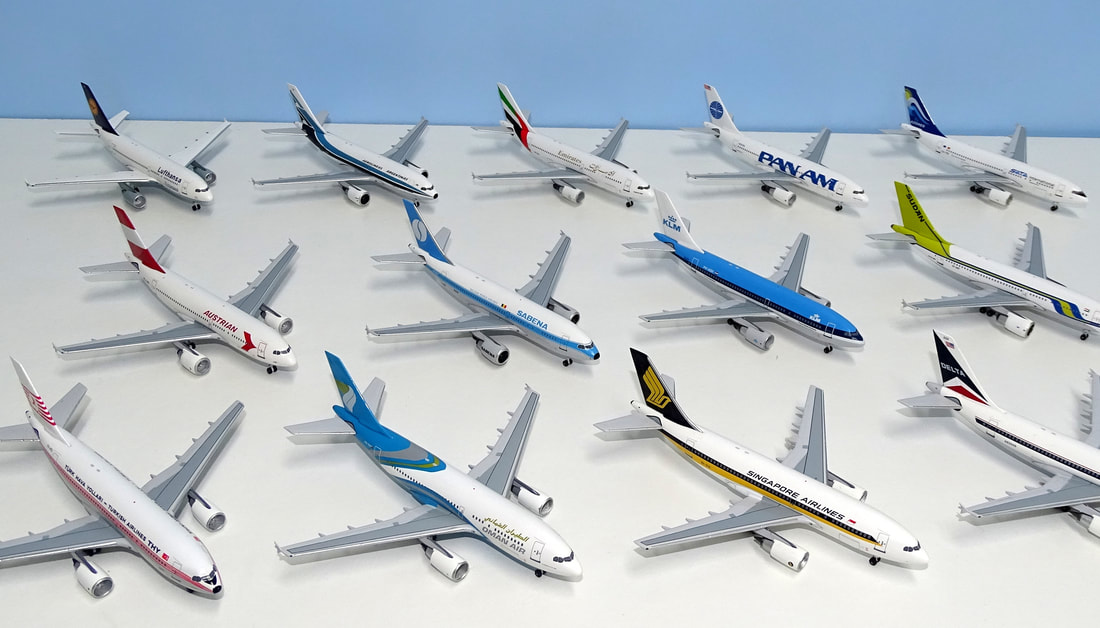 255 A310s were made between 1983 and 1998 - so not staggering numbers but decent enough given Airbuses relative position at the time, the low dev costs and the 767-200's 249 sales. It certainly held its own, winning the many orders from European majors and carving out an ETOPS niche across the Atlantic. It also proved a good type for several of the smaller European nationals wanting to fly long-haul ops (CSA, Austrian, TAP, Tarom for example) and a precursor for later sales of A330s/340s.

Below are shots of the A310-200 (Lufthansa) and A310-300 (Singapore) in 1:1 scale. The main difference between the two outwardly are the wingtip fences on the series 300. Note also that these two aircraft sport different engine choices. The Lufthansa has General Electric CF6s and the Singapore Pratt & Whitney PW4152s.

Dragon Wings (2003)
Dragon's A310, like their A300, is one of their better Airbuses, although I admit that is damning with feint praise. The 13 distinct models (a couple were rereleased with runway sections and/or other models) were made between 2003 and 2009 covering a range of the most common A310 operators like Pan Am Singapore, Emirates, FedEx, TAP etc. The biggest issues with the mould are things that many Dragon models have problems with - the cockpit windows, tail join and the undercarriage. The cockpit windows often look simple and either too large or poorly placed. The simple chunky undercarriage and wheels many Dragon models display are evident. Unusually for a Dragon mould it is a cradle mount so there is a small seam around the wing join. It also looks as though the engines are held too low and close to the ground. Even so, some models, as in the Singapore example below, look pretty good. 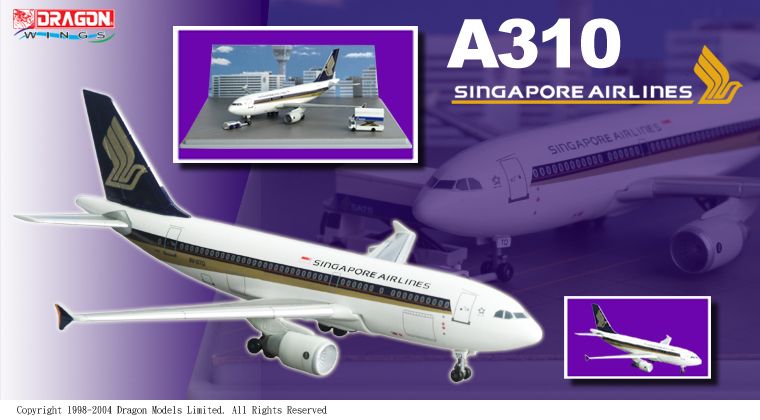 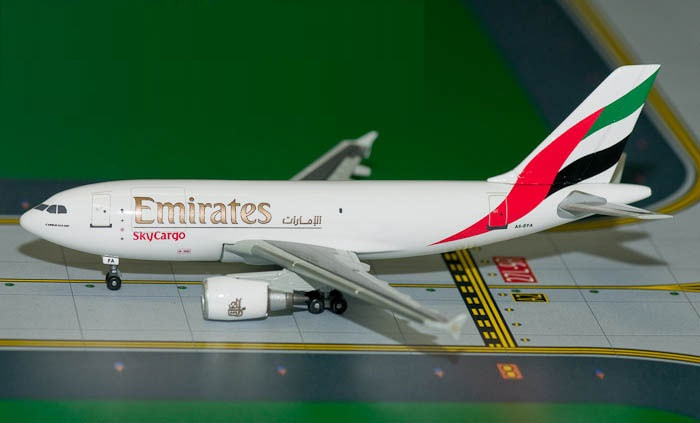 Herpa (2003)
Herpa seem to rather reluctantly dip into 1:400 from time to time producing an impressive number of moulds which they rarely use (only 5 times in this case). This isn't always a bad thing as some of the moulds are not great. Their A310 is actually better than I originally gave it credit for. The nose region is actually quite good, although the angle of the cockpit is a little too acute. The mould is seamless and has a decent wing join, although once again the engine pylons hang the engines too low. The rear fuselage is the weakest area as it seems too fat aft of the wing  with a tail that looks too small giving the model a slightly odd look. Regardless of the mould's quality it's very infrequent usage makes it rather unimportant.

Gemini Jets (2004)
Gemini's mould has also been used by both Phoenix and JC Wings. For many years it was the best A310 mould but then again the competition wasn't very strong.  The overall shape of the mould is pretty good and the small wing join seam forgivable. The biggest issues with the mould sit with the wings and pylons.

Firstly the wings are far to level even to the point that they sometimes seem to point downwards. They should have a slight upward sweep. I can forgive this but it doesn't help the biggest mould issue - that of the engine pylons. These are too large giving the engines very little ground clearance. As with the Dragon mould the nose is also quite blunt and the transition from the cockpit to radome not obvious enough. When Gemini print their cockpit windows properly this isn't too obvious however.
Gemini had improved the mould with rolling gears in its later versions like this Thai Airways but nothing had been released since 2008, until October 2015 anyway, when Gemini released a Pan Am A310 out of the blue. Curiously they reverted to the much inferior static gear but they did add aerials (as JC Wings has been doing to older Gemini moulds like this). The model looked good from distance but I was quite disappointed by mine when it arrived. The wing and pylon issues remain, whilst my example came with an inability for the nosegear to sit on the ground and an unstuck vertical stabiliser. Since 2015 there have been a few irregular releases by both Gemini and JC Wings.
Blue Box / Jet-X (2006)
Blue Box was the last manufacturer to produce an A310 prior to 2016 (although the majority of its usage was under the Jet-X brand) but sadly despite this it is probably the worst mould of the four. I have previously been very dismissive of the mould but some recent close-up shots provided to me by my friend James C. Kruggel of his Libyan example show it in a slightly better light than the database photos I had seen up till then. Still it has an odd shape around the nose, huge wing seam and the undercarriage looks too short giving it a very dumpy look. Some of the pictures I've seen make it look truly awful, check out this KLM example, but Jim's Libyan example appears better. I think if they lengthened the undercarriage then it would look a lot better and avoid the same too low engine appearance that the Gemini mould also suffers from (but for different reasons).
Aeroclassics (2016)
The new Aeroclassics A310 appeared in 2016, although the first 10 releases weren't branded as Aeroclassics for licensing reasons (these covered Pan Am, Singapore Airlines, Lufthansa and Delta). The mould is superb but does of course lack aerials and more complicated gear hubs. The only real criticism of the early releases was the engines. The shape of the nacelles is a little off and of the initial subjects Pan Am, Delta and Singapore aircraft should be wearing Pratt & Whitney engines and not the General Electric CF-6s the models came with. It wouldn't be until 2017 that Aeroclassics had a P&W engine option for their A310 mould.
In comparison to the nearest competitor, the Gemini mould, the Aeroclassics version is superior across the board. You can see that the nose and especially cockpit shape is more angular in the new AC mould and much more realistic. This improved shape also allows for better printing of the cockpit windows. The Aeroclassics nosegear is much more detailed, whereas the Gemini's is static and the bogies are an amorphous blob. The wing joint in the Aeroclassics almost perfectly models the real thing whereas the cradle fit in the Gemini is slab sided and ugly. Onto the wings and in the AC mould they are correctly angled slightly upwards, whilst the engines sit an accurate distance above the ground - quite the opposite of the Gemini. Another important point, which becomes much more obvious at the rear, is that the AC mould is correctly a bit nose high whereas the Gemini has a completely level back. I even prefer the tyre size on the AC mould.

From the rear the superiority of the Aeroclassics mould continues. The Gemini is much higher at the rear as it has failed to show the nose high attitude of the real thing, whilst the rear wing joint is much more realistic in the AC too. The vertical stabiliser - fuselage join on the Gemini is also a clunky affair. 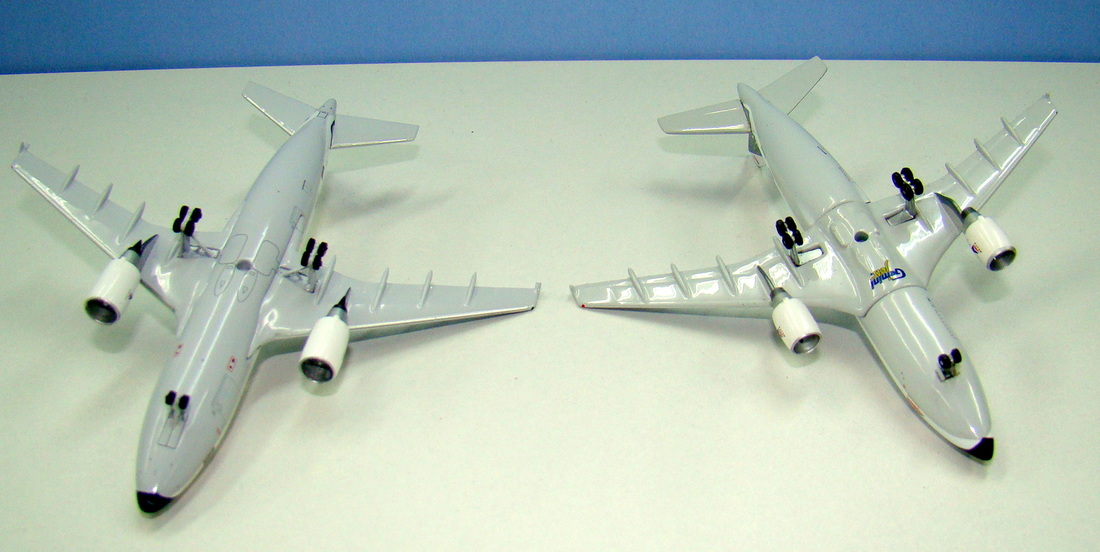 Underneath the seamless Aeroclassics mould looks better, though the Gemini does mould some features that are only outlined on the AC mould. ​From the front you can see the AC moulds superiority clearly. The wings are angled better, the engines much higher from the ground and overall detail everywhere better.
Aeroclassics has gone on to use their series 200 and 300 moulds well to produce a strong range of A310s and I have replaced all my older Gemini versions with the Aeroclassics versions.
JC Wings (2022?)
Stay tuned as JC Wings has confirmed that they are making a new A310 in 400 scale - see here for details:
Two New 400 Scale Moulds from JC Wings