Text and airport plan by James C. Kruggel (aka BWI-ROCman from DAC)
Primary Source: Airports of the World by John Stroud, www.departedflights.com, and the Albany International Airport Website 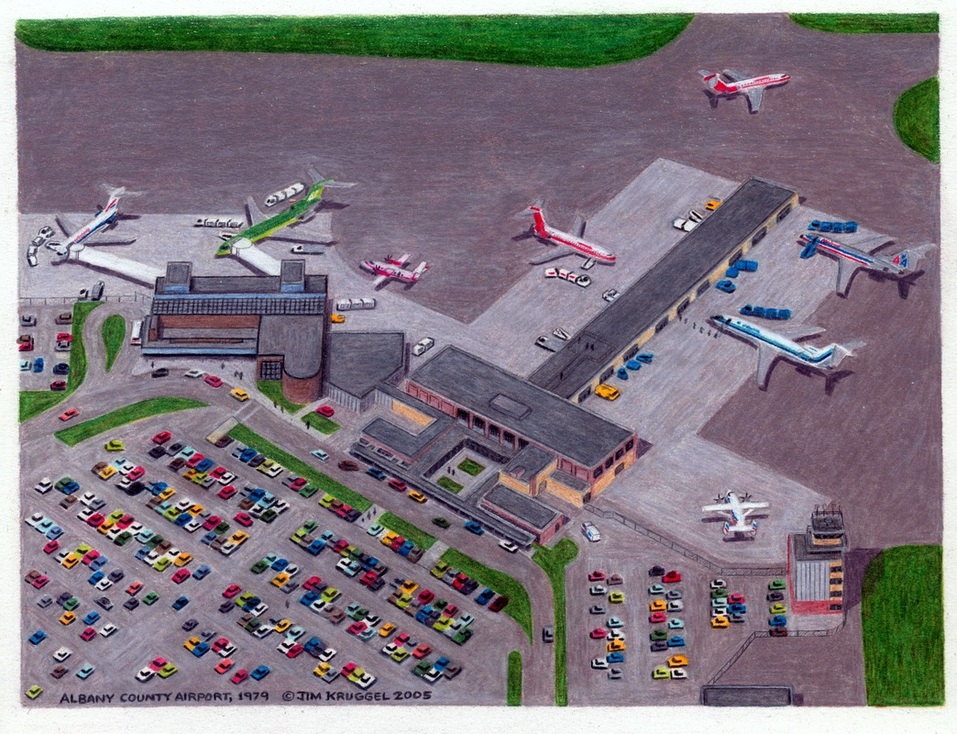 Albany, New York is the state capital and one of three small-medium cities that make up the “Capital District,” a metropolitan area of about 850,000 to 1.1 million people, depending upon which neighboring statistical areas are included, near the border with Massachusetts. Albany hosts the state capital and a major state university. Rensselaer hosts the Rensselaer Polytechnic Institute, and Schenectady was a manufacturing center. This diverse triangle of cities and their suburbs on the Hudson and Mohawk rivers, in the mountainous foothills of the Appalachians, is served by Albany International Airport (ALB).
ALB is a medium-size airport that handles about 2.5 million passengers per year. This is a drop from approximately 3.1 million passengers handled in 2005, a year of more competition and lower oil prices, before the anticompetitive consolidation of most large US carriers in 2008-2013.

The current airport was built in 1928 in the town of Colonie immediately to the northwest of Albany. Two brick hangars were built, along with a brick terminal and administration building. In those days of smaller propeller planes, runways of 2,200’, 2350’, and 2500’ were sufficient to handle traffic. The airport was served by various carriers with “milk-run” services by Colonial Western and Canadian Colonial, to cities such as Newark and Montreal. During the 1930’s and 1940’s, the runways were extended and more land purchased.  Various obstructions to safe operations surrounding the hilly site had to be removed to allow safe operations.

In the late 1950’s, the Civil Aeronautics Administration threatened to shut down air traffic control services because they considered the old wooden control tower to be a fire hazard.  A new control tower was opened in 1957. Services in the 1950’s included American, Mohawk, and Trans World Airlines.

In 1960, Albany County bought the airport from the City for $4.4 million and built a new terminal. The early-modern style terminal, with brick-and-metal-spandrel walls and curtain-wall windows that would be at home in Mad Men, opened in 1962. The terminal featured a two-story rectangular landside building with ticket counters, restaurant, and baggage claim, and a finger-concourse with a viewing deck on top.  American Airlines and Allegheny Airlines (fore-runner of US Airways which is about to be absorbed into American in October 2015) served the airport with propeller aircraft.

Below: Typical Albany visitors in the late 1960s and early 1970s
Air travel continued to grow through the 1960’s and 1970s. By the late 1970’s, Albany also was served by a panoply of small local-service carriers such as Command Airways, Mall Airways, Air North, and Empire Airlines. In 1979, a new brown-brick addition was built to the terminal’s northwest end for Allegheny. That same year, Albany became the first and only Upstate New York airport to be served by colorful Texas trunk carrier Braniff International, which expanded its network (too) rapidly after the US airline industry was deregulated, allowing airlines to freely set their own routes and fares.

In the 1980’s, Albany like many US airports saw an explosion of new service as airlines competed aggressively in the new deregulated environment. United, Piedmont, People Express, and other carriers were squeezed into the terminal. By the late 1980’s, the first post-deregulation wave of airline consolidation reduced considerably the number of carriers serving Albany.

Below: Typical Albany visitors in the late 1970s and 1980s
In the 1990’s, Albany like other medium-size airports endured high fares from consolidated ‘legacy’ carriers who strove to minimize competition and maximize returns. In 1998, Albany opened a new terminal, replacing the 1962 portions with a handsome blue-striped building with curtain walls, a ticketing area with colonial-looking circular windows, and a two-story concourse with gates on the first floor for regional aircraft, plus gates on the second floor for mainline aircraft.

During the quiet 1990’s, Texas-based low-fare carrier Southwest Airlines had quietly been growing into a national powerhouse by expanding slowly and staying out of the way of legacy carriers. They launched a campaign for the East Coast by entering Baltimore-Washington Airport in 1993. In 2000, the carrier granted Albany every US airport-manager’s dream by entering with hub flights to Baltimore, Phoenix, and Las Vegas, plus nonstops to Florida. Albany’s strategic location at the juncture of US interstates 90 and 87 gave the airport a wide catchment area reaching from Montreal in the north, to Syracuse in the east.
Albany enjoyed high enplanements and competition during the 2000’s, served by the six legacy carriers (American, Delta, United, Northwest, Continental, and US Airways) along with Southwest. One interesting feature was a small hub run by Continental using a regional subsidiary with 19-seat aircraft. Albany had the unique feature of being one of the few US airports with a few “double-door” jetbridges—“y-shaped” bridges that access a rear door. Southwest installed them as an experiment. Albany’s runways are now 8,500 (1-19) and 7,200 (10-28).
But late in that decade, the largest US carriers again determined that competition and reasonable air-fares were not the route they wanted to take to profitability. Between 2008-2013 they consolidated, and Albany today is served by American, US Airways, United, Delta, Southwest, Air Canada, and a New England regional carrier called Cape Air. Albany, like other Upstate New York cities, is not a major economic growth area. But the state government and universities provide major employers, and Albany International Airport should continue to have service levels representative of the new consolidated era.

Below: Typical Albany visitors of the 1990s