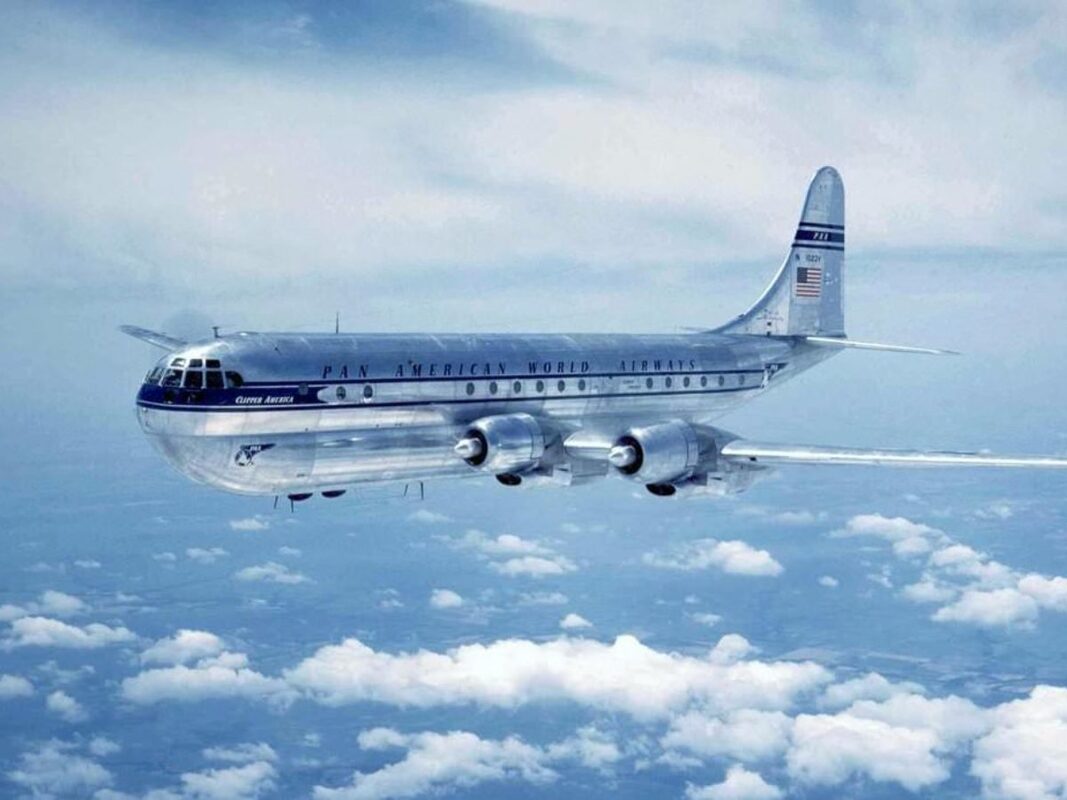 Around 1950 Pan Am adopted a white crown to the livery, which otherwise remained largely the same aside from a much larger PAA on the tail. This was the first scheme worn by the DC-6s and DC-7Cs.
1958-1970: JET AGE / GLOBE SCHEME
One unusual aircraft to wear this scheme was the sole DC-8-62 operated in Pan Am colours. It was actually a Braniff aircraft but was being flown on an interchange route.

1970-1973: GLOBE SCHEME SHORT TITLES
For the arrival of its first 747s Pan Am gave into the fact that nobody called it Pan American anymore and changed the titles to simply PAN AM. The titles were not enlarged for the 747s on which they looked tiny. The old style widely spaced PAN AM lettering remained in use.
1970-1973: HELVETICA FONT
When Najeeb Halaby became Chairman of Pan Am in 1970 he wanted to inject new life into the old and conservative airline. He commissioned Ivan Chermayeff for the job. Chermayeff, along with Tom Geisnar, ran one of New York's most influential design practices. They created a new font and logo for Pan Am, which was the frontispiece for a new promotional campaign of posters. The new Pan Am logo was in Helvetica Medium and the Globe was simplified.
1973-1976: UPDATED GLOBE TITLES
1976-1984: 747SP DELIVERY
The arrival of the first Boeing 747SPs signaled another update to the simple Globe livery, which had remained basically unchanged since 1958.  Yet again major change was avoided and instead the Globe scheme was simply modified to fit the 747s better.

Changes were limited to:
This scheme was worn by the new Boeing 747SPs and Lockheed Tristar 500s as well as the 707s, 727s, 737-200s, 747s and DC-10s, the latter inherited from National.
​
Many of the 727s and DC-10s inherited from National kept their white bellys:
1977: FLIGHT 50
Pan Am had already flown the 747SP N533PA 'Clipper Liberty Bell' around the world in May 1976 but in October 1977 she was rechristened as Clipper New Horizons and performed the famous Flight 50 route circumnavigating the globe from pole to pole. More details of the flight can be found here and here. For the flight the SP wore a special Flight 50 logo behind the main titles. The aircraft kept this logo after the completion of the record-breaking feat.

Subsequently when the billboard livery was rolled out the aircraft was repainted, gained a new Clipper name but kept a modified version of the Flight 50 logo, now moved behind the cockpit.
1982 EXPERIMENTAL 747 SCHEMES
Sometime in 1982 Pan Am started playing with its livery. Two different schemes were trialled from 1982 onwards both with substantially larger fuselage titles and a thicker cheatline. In the end neither were taken up and a more radical design adopted.