The Boeing 727-200 was without a doubt the aircraft of the 1970s offering, especially in its series 200 Advanced model, unrivalled efficiency and performance. It was a massive seller in the United States being used by all of the Trunk airlines several of which (Braniff and Continental in particular) standardised their fleets around it. Outside the USA the series 200 saw service with most European flag carriers and the big two Australian domestic airlines. Only in the UK did the type fail to make much headway, but that was as much due to political interference as the ability of the competing Trident.
Production numbers for the 727 were unheard of for a jet type until the late 1980s. Of the original stretch version 310 were built between December 1967 and 1972. The Advanced 200 received 935 orders and production continued until 1984. The last passenger 727-200 didn't leave service until January 13, 2019.

To date there have been nearly 280 727-200s made in 1:400 scale, however the only manufacturer releasing the type at all regularly nowadays is Aeroclassics. Having said that Gemini Jets have released two in the past year, but I wouldn't get my hopes up looking to them to fill the substantial backlog of unmade 727-200s in this scale. That's a shame as their 727-200 is probably the best of the five moulds that have been made. 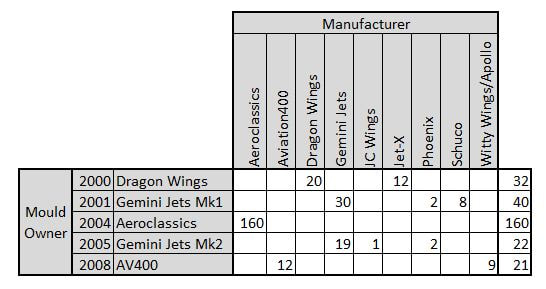 For some the Dragon Wings 727-200 remains the favourite rendition in 1:400 scale and it does have several redeeming features that newer moulds don't have! Even so I am generally not its biggest fan, although chuck new undercarriage on it and more modern printing and it'd rate much more highly. The shape of the fuselage, engines and tail is good and the fuselage mould, in keeping with all Dragon Wings efforts is splendidly seamless (except for on the underside). There is a seam to fit the horizontal stabilisers onto the tail top but the fit is tight. I'd like the nose to be sharper and on some releases the nosegear doesn't have a central hub which makes it look odd. The Dragon main gear annoys me a bit too as the gear doors are too long and its troublesome to position properly.
The mould was used relatively rarely, for Dragon Wings. Almost all the releases, aside from a few Ansetts, represent US trunk airlines - often with multiple variants. One interesting model that was made was the late 1990s Pan Am III 727 fitted with winglets and hushkits. For some of the older releases with the poor nosegear it may well be worth finding donor 727s and replacing the gear to one with hubs. This is easy to do with Dragon models since the gear is always detachable.
Gemini Jets v1 (2001-2005)

I have to say that the Gemini 727-200 is one of my favourite Gemini castings and of the 84 series 200s I own 28 use this mould (or its later incarnation). There would be more if Gemini used it more regularly. Between 2007 and 2013 none were released by Gemini (although Phoenix did release a couple when sharing the mould) and since then only four have been made (two in 2019). Technically the new ones are not exactly the same mould as the first examples so I'll split up discussion of them here, although they share the same fuselage and wings.

The shape of the fuselage and wings is very nice, although the mould does have two seams. The first is due to it being an old-style cradle mould, although the seam is very discrete. The second comes at the tail top where the horizontal stabilisers are one piece attachments. Neither of these are major issues for me.
Gemini Jets v2 (2005 - Still in Use)
Later Gemini Jets 727-200s use a slightly modified mould, which has a new tail. The new tail eliminates the seam and makes the horizontal stabilisers slot in components. The effect is good but I think the tail top is now too flat. There was a substantial gap in the use of this mould as between 2007 and 2013 no models made on it. Both the 2013/2014 Pan Am releases debuted new rolling gear. I actually liked the old Gemini static gears and the new rolling gears here are fine, but arguably inferior in terms of the shape of the maingear doors. Both of the later 2019 Geminis, plus the new JC Wings release have aerials fitted, however all earlier issues do not.
Aeroclassics (2004 - Still in use)

It is no real surprise that Aeroclassics have used their 727-200 mould prolifically. In fact they have now made almost 2/3 of all of the type made in 1:400. For some the mould is inferior to both its predecessors and whilst in some ways I agree overall it is more than good enough for me. Plus if you want any diversity of 727s in your fleet you'll have to suck it up as everyone else has made almost 100% US examples.

Once again the main fuselage and wings are good. The nose is a little sharper than the Dragon and Gemini and better for it. This is also a cradle mould but the seam follows the wing/fuselage fairing and gets away with it. The undercarriage is good whether you have an earlier example with static gear or a later one with rolling gear.

It is at the tail region that most of the criticism of the mould falls. The no 2 engine exhaust is too large and the tail top has a seam - much like the original Gemini mould does. Despite these failings older Aeroclassics 727s are often very hard to find and new additions are welcome in my collection.
The last issue I have with the mould is printing. In recent years Aeroclassics has often forgotten how to print their 727 cockpits and the result is often a rather angry looking aircraft. The United example below is a good example of this bad printing. The cockpit should be straight across the top not in a U shape. This defect appears to vary across releases (they have had similar issues with their DC-9s of late too).

The Witty factories were the last manufacturer to attempt a new 727-200 and a relatively small number of rather obscure releases were made between 2008 and the failure of Witty in 2014. The mould actually bears a striking resemblance to the Dragon Wings mould but is all metal. It is a seamless mould both at the wings and horizontal stabilisers. It compares well to all the other moulds aside for one major mistake - the front edge of the tail and the rear edge are parallel. Witty have forgotten to make the rear angle different and it meets the roofline too high up the fuselage. If this detail were fixed then this would probably be the best of the bunch.
Detailed Mould Review
For a detailed side-by-side comparison of all the available 727-200 moulds and the real thing see this post:
T-tail Trijet Heaven: A 727-200 Detailed Mould Review