Far from a successful attempt to enter the jetliner market the CV-880 was nonetheless a beauty, cruelly squeezed to death by the DC-8 and 707 (and especially Boeing's 720). The Convair 990 fared even worse, failing to meet its performance targets and being taken on only reluctantly by launch customer American. Despite this it was arguably even more attractive than the 880 with its iconic wing anti-shock bodies. The production numbers nonetheless speak for themselves with only 65 CV-880s built and an even less impressive 37 CV-990s. The type's small size and fuel thristy turbojets also meant its service life was brief with the fuel crisis of the early 70s doing for most of the aircraft.

Before we compare the moulds let's first take a look at the real thing:

I have to admit that this is one of my favourite moulds in 1/400. The mould is excellent and I haven't any major misgivings about it at all except that as with many slightly older moulds the wing/fuselage seam is a bit obvious because it is a cradle type. Aeroclassics released a decent range of airlines with the mould ending with the Convair home colours. Aeroclassics loaned it to (or produced models for) both Aurora models and Gemini. Interestingly all 3 manufacturers made an example in the Delta delivery colours and comparing all three is interesting. Gemini also made a Delta Widget and a pair of TWA 880s. Overall the moulds has seen 24 outings.
Herpa (2006-2007)

Why do Herpa bother in 1/400 scale when they use their moulds so rarely? I don't know but their moulds fall into the awesome category (AN-124, 747SP, 757, Concorde) and also the crap category. The CV-880 is firmly in the latter category but thankfully has only been used twice - once for a Cathay corporate order of a whopping 6000 models. The nose is fat and snoopyish, the nosegear too small, the engines poorly fitted and with a side seam and the tail and end of fuselage oversized and boxy. It's rubbish - avoid, specially when you can get the Aeroclassics mould.

Apollo / Witty surprisingly entered the 880 fray in 2013 and created a small number of what were effectively re-releases, however some of the older AC releases are hard to find so that wasn't necessarily as bad thing. Despite suggestions that they had stolen moulds in the past this CV-880 is NOT a direct copy of the Aeroclassics mould. Sadly Witty shutdown its entire 1:400 model production in late 2014, with JC Wings the apparent buyer of its mouldings. I doubt we'll ever see this one reappear, which is a shame because it is bloody nice.
I have no major issues with the mould. The wing seam is an improvement on the AC mould. As you'd expect with a newer mould the wings attach to the fuselage as separate pieces. There are other obvious differences between the AC and Witty moulds - mostly at the nose end. The Apollo / Witty nose is more pointed and slimmer (though I've noticed the Cathay livery accentuates this (check the real photo above)) and the Witty nosegear is clearly different too (larger gear door and different detailing).
Below we have VIASA/KLM Aeroclassics on the left and Apollo Cathay on the right. One minor bad point about the Witty is there appears to be a seamlike line running along the side of the engines - though to be fair it is very feint and hard to see. I'm not sure which I think is 'better' as both are very good in my opinion and I'm certainly glad to have been able to get the two Cathays for which the Aeroclassics versions are rare. 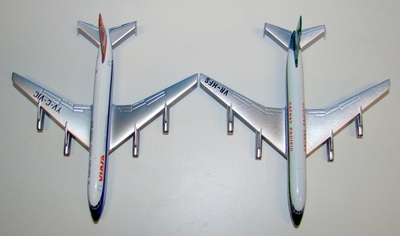 Before we compare the moulds let's first take a look at the real thing:

Aeroclassics Convair 990 is as nice as their 880 and interestingly Aeroclassics have used it more times for their own models than they havetheir 880 despite the disparity in production numbers of the aircraft itself. It shares a similar general structure to the 880 mould with the cradle wing construction but like its smaller brother it is excellent. Gemini borrowed the mould four times to make very nice Alaska Airlines, American, Modern Air and Garuda Indonesia examples. Coverage of operators has been good, even including the short lived Air France lease, but there are still a few more that could be squeezed out if the mould is still available for use.
Witty Wings / Apollo (2013-2014)

As with the CV-880 Witty also dabbled with a new CV-990 mould towards the twilight of their existance. As with the 880 it is also very nice but sadly only two examples were made - both previously made by Aeroclassics. As with the Witty 880 the mould is not a cradle type and so avoids the wing seam, which makes it arguably better than the already very nice Aeroclassics example.