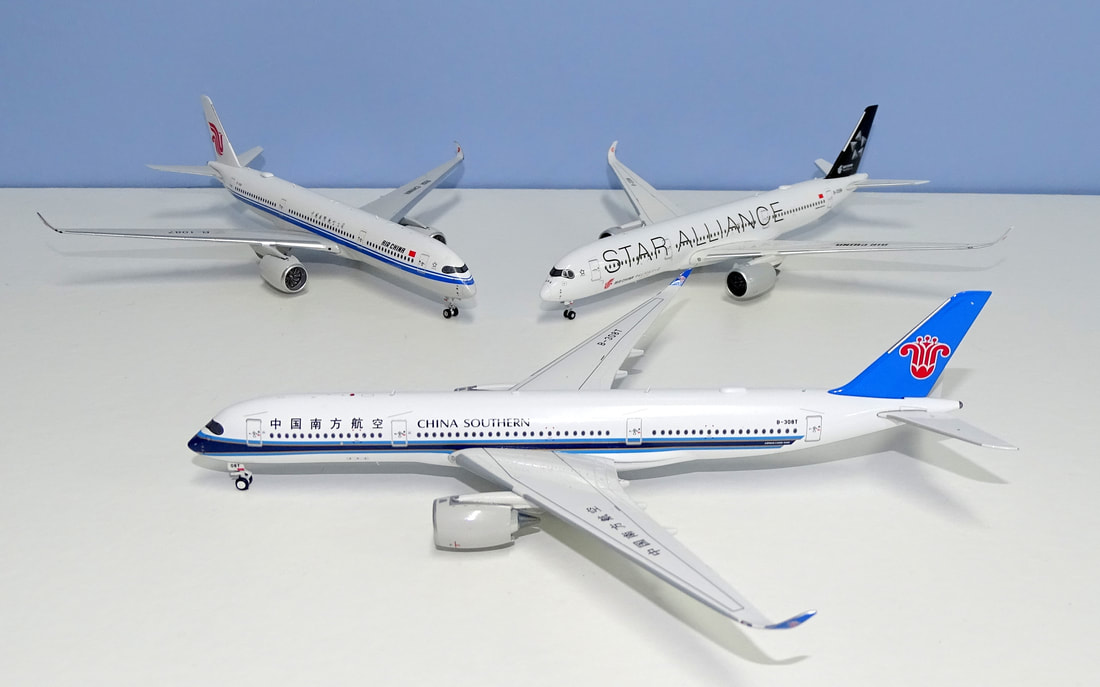 When I wrote my original detailed mould review for the Airbus A350, back in July 2018, the type was just beginning to make its mark in service. Now two years later there are over 350 in service. The current Covid crisis has seen the dumping of older less efficient types such as the 747-400, 777-200 and even 777-300ER, plus the huge A380s, leaving the 787 and A350 as the pre-eminent long haul widebodies.

In 1:400 scale much has changed as well since both the JC Wings / Gemini mould and the Aviation400 mould have seen improvements. It seems sensible to provide an update to the original comparison showing the state of play as it is in 2020 prior to the arrival of the NG Models A350.
The moulds to be compared in this detailed comparison will be the following:
​All models are from my collection.

AVIATION400
The review will take the form of a comparison of various areas of each mould to the real aircraft, with a score out of 5 alotted for each mould for each area. Adding the combined scores together gives you the winner. Since all 3 of these moulds are good this is going to be a tough competition.

​NOSE / NOSEGEAR
NOSE: The nose region is the most criticised area of A350 moulds and the area that has been improved on the updated JC Wings / Gemini casting. As you can see there ought to be a change in angle at the base of the cockpit. It is present in both the JC Wings and AV400 moulds, although arguably not as strongly as it ought to be. The older Phoenix mould has an incorrect transition and also I think has a nosecone that is too rounded. The updates JC has made are a distinct improvement on the original profile.
NOSEGEAR: The first thing to point out is that none of the manufacturers get the colour of the gear correct. JC Wings and Aviation400 go with a light grey whilst Phoenix goes with silver. They should all be aiming for a dark metallic grey. The JC Wings gear is too short, whilst the nosegear door on the AV400 is a little large. The front process on the AV400 mould is also a little long and the tyre a little large.

The nosegear door on the Phoenix is slightly too recessed into the fuselage and the detailing on the gear leg is too low making it look a little like it is on stilts. This is a tough one to score. If the JC gear were a little taller I think it would win. As it is they all are losing points for different issues.
ENGINES & PYLONS / MAINGEAR
ENGINES & PYLONS: The Phoenix mould has been criticised heavily for the lack of ground clearance provided, which is mainly a symptom of the nacelles not being held high enough off the ground by the poorly shaped pylons. It is better than it once was but the pylons are still wrong in front of the wing. The AV400 pylons are very nice except aft of the engine exhaust where there is too large a gap. The JC Wings mould has the best pylons of the three and even with short undercarriage ground clearance is good. Unfortunately the shape of the exhaust on this mould is the weakest as the second stage is too wide and the end cone too thick.
MAINGEAR: All three moulds have maingear bogies that move up and down around the central tyre, which is a nice feature.  All three look good but the AV400 tyrehubs are probably the weakest. AV400 has improved the size and shape of the maingear while the JC Wings mould has the widest and least accurate gear trucks. The AV400 maingear doors are a little too short, but are the right shape, and show off too much of the gear leg itself. The shape and angles of the maingear doors are not perfect on any of them but only the Phoenix misses the large rectangular notch at the top.
ENGINE INNERS​
ENGINE INNERS: All of these models have see through engines, however it seems the wish to have the see through element has meant the manufacturers have reduced the size of the blades so you can see through more. This is counter to the reality of the engine. JC Wings keeps it closest to the real thing with the blade thickness whilst the fanblades on the AV400 mould are way too thin. On the other side though both JC Wings and Phoenix have far too few fanblades (13 or so) whilst AV400 has a much more realistic 18 blades. A plus for the Phoenix version, if you care for this sort of thing, is that the fanblades can be rotated. It is really hard to do and requires you putting a pin or such inside to move them. It doesn't really add much to the model in my opinion.

TAIL & TAILCONE
TAIL & TAILCONE: Starting with the tailshape and all three are broadly accurate although the Phoenix is weakest in two places. Firstly the fin connection to the fuselage runs along the entire lower margin whereas the other two both have free rudders. Secondly the rear tip is not quite pointy enough. The AV400 tail is nice aside from the forward fuselage join, which is a little too bulky. The tailcones are all fine but the horizontal stabilisers on the Phoenix have quite a large gap along their upper margin.

Most A350s have 5 aerials (3 above and 2 below) plus often a significant Wi-Fi dome on the rear roof. JC Wings and Gemini often miss off the rear underside aerial whereas Phoenix and AV400 always have all of them. The AV400 of course has the added detailing of navigation beacons above and below, which are a really nice extra detail.

Once again although I admit it isn't a mould detail as you can see printing detail is lacklustre on the Phoenix model compared to the other two. There aren't even any maingear doors on this one! The Phoenix model also has a notably glossy finish - another trait of Phoenix models. 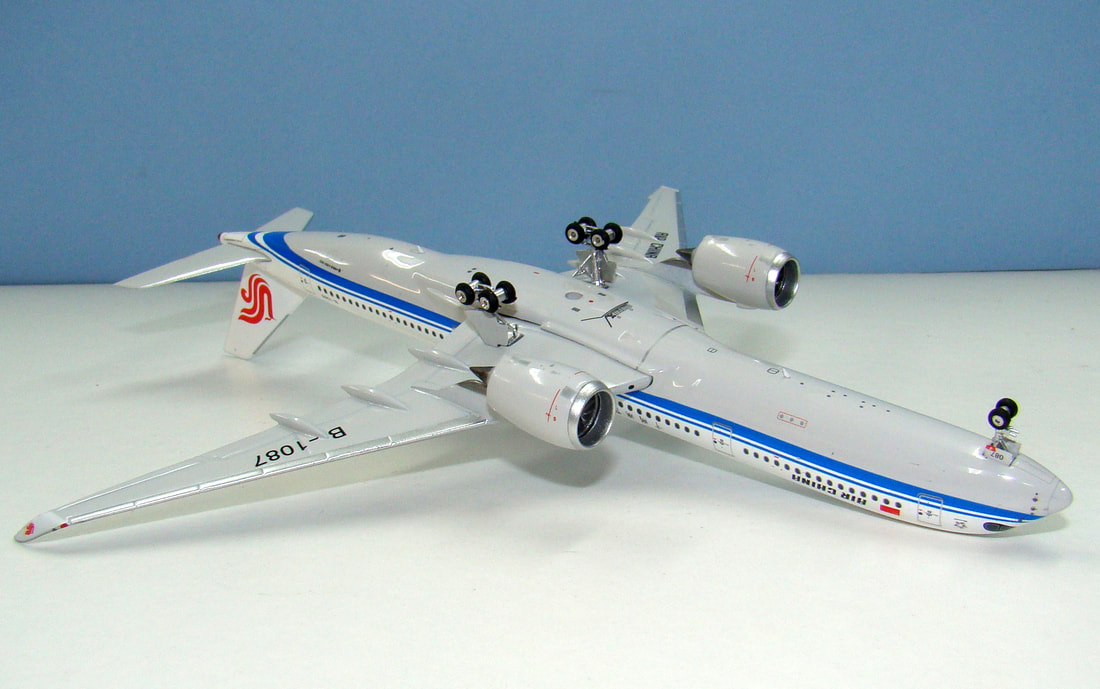 On the underside of the mould the notches between the wings are only printed on in the JC Wings version. They are rather ill defined but moulded in the Phoenix and moulded the best in the AV400. Above on the roofline, once again the JC Wings lacks the detail of the small bumps above the wing, which is present on both the other moulds. 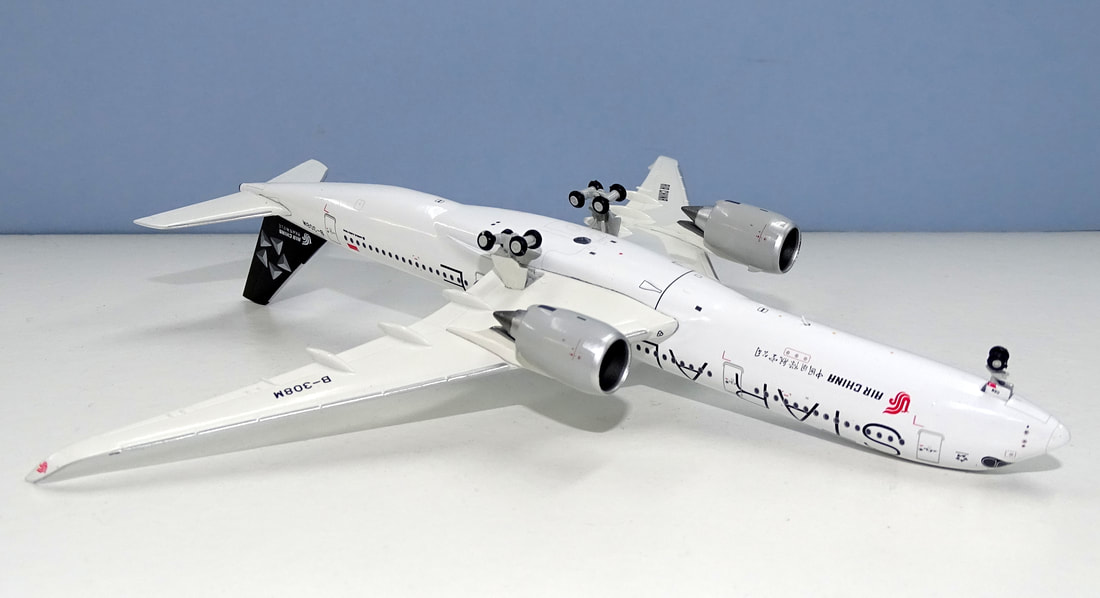 Nonetheless , although the JC Wings is a nice mould I think the Aviation400 version is the worthy winner. It has more detailing on the fuselage, better length undercarriage and also in general superior cockpit printing. In addition AV400 models come with both a pushback tug and a stand.