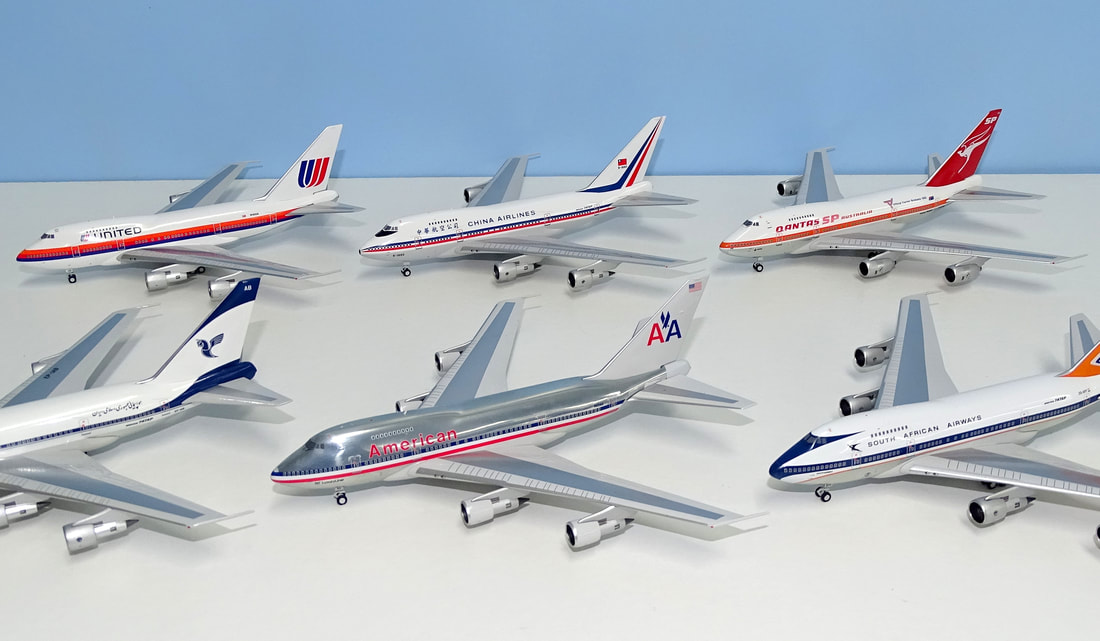 The 747SP was at the time the longest ranged airliner in the world designed to enable Pan Am and Iran Air to operate services from New York to the Middle East. As engines at the time simply didn't give the performance the easiest way to gain the range was to shorten the standard 747. Of course as engine improvements were created the ordinary 747-200B was able to match the SP's range and it is therefor eno surprise that production only reached 45 aircraft. The SP did however find a niche as the 'perfectly' sized private jet for Princes with too much money. The type's first flight was on July 4, 1975 and service entry with Pan Am was in 1976. Deliveries were over by the end of 1982 except for a single aircraft that was delivered as late as 1989. The type's commercial service ended in 2016, with Iran Air, but at the end of the year there were still 10 aircraft in service with government or private operators. One aircraft operates for NASA with a massive telescope fitted inside its rear fuselage.

Since only 45 747SPs were built it isn't surprising that there are not hundreds of different models floating about, however there are still a decent number of them in 1:400 and it is perhaps unsurprising to see Herpa fulfilling their chosen role in this scale i.e. to produce rare and unusual types in annoyingly small numbers. Unlike for the series 100 and 200 it is at least easy to explain the breakdown of models and moulds, although the Gemini mould has been constantly updated.

When I previously updated this review in August 2020 only 41 models had been made, however the advent of the new NG Models mould has seen that number jump to 68 - not just because of NG, but also because JC Wings has started releasing competing 747SPs on their inferior old ex-Gemini mould. In fact, NG Models 747SP release rate to date has been rather disappointing with only 16 models across 18 months. 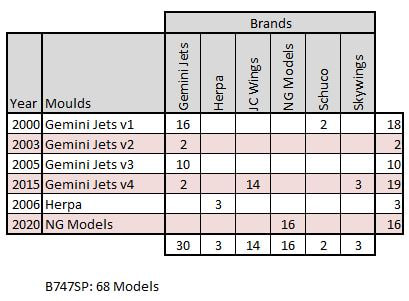 You'd have to be blind to not be able to tell a 747SP from a standard length 747 since the SP is much shorter and also has a noticeably taller vertical stabiliser. SPs were delivered with two engine options: either the Pratt & Whitney JT9D-7 or the Rolls Royce RB211-524.

Version 1 (2000-2003)
As with their 747-100/200 mould Gemini are still using their old SP mould today and just like that mould it is in modified form. The SP mould basically looks like they've literally chopped the old mould and put a new tail on it, therefore it shares the same features as the longer version mould. It captures the general shape of the 747 quite well but is very dated by modern standards. The undercarriage is very simple - not far away from just being stalks (a bit like early Dragon models). The nosegear doors are tiny especially on the United Saul Bass release which looks odd. The rear main gear legs move in their placements (a feature shared by many 747 moulds) and the wings completely lack the rearward pointing aerials that are such a feature of 747s at the wingtips, whilst the engine pylon / wing join is famously clumsy and ugly. As you'd expect from such an early mould it is a cradle fit but the seam line follows the wingtop line well so this is not a major issue. Lastly, as with many early Gemini moulds there is a secondseam line to enable fitment of the horizontal stabilisers. Since, at least at the moment, there isn't any other option for a lot of the SP models, if you want them you're going to have to live with this mould. Incidentally the two Schuco releases are just rebadged versions of existing Gemini Jets releases.
Version 2 (2003-2005)
​In exactly the same way as with the 747-100/200 Gemini have gone to some trouble to fix the issues it originally had and make it more suitable for today's market. The changes have been gradual. ​The first move was to the Gemini Jets II style with the rear seam removed for a one piece fuselage, albeit still with cradle mounted wings. Only a couple of models got this version prior to the next upgrade.
Version 3 (2005-2014)
In 2005 the SP wing was remoulded with added HF wingtip aerials, albeit slightly chunky ones. The undercarriage was improved quite early on and the latest releases have rolling gears too. Again as with the 100/200 what hasn't changed is the poor pylon join point, which remains the moulds achilles heal.
Version 4 (2015-Extant)
​The most recent Gemini releases from 2015 (Iraqi and Saudia) also have had aerials added to them. The mould is now part of the JC Wings back catalogue and Skywings in 2017 worked with JC Wings to get an Air China and a pair of CAAC 747SP examples made. Oddly the JC Wings examples were missing the black anti-glare, although the Skywings versions were sent back to get it added on.

I should note that I have had issues with the HF aerials. They are thick enough on the models but both of mine have been broken so I'm blaming the box!

The arrival of the new NG Models mould (see below) spurred JC Wings into action and from no models since 2017 (and barely any before that) all of a sudden JC have made 6 releases since 2020. This can only be seen as a rather cynical spoiler to damage NG's profitability with the mould. The reality is that the mould is markedly inferior in every way to the NG offering.
Herpa (2006-2011) - used 3 times

Onto Herpa who, in typical Herpa form, have made a tiny number of models on their 747SP mould, which compares well enough to the Gemini version but has a variety of its own issues. It has slot in wings and so is seamless and the overall fuselage shape is good. Less good is the nosegear leg, which as often the case with Herpa, is a little simple and plasticky. The separate tail also has a rather obvious seam line with the fuselage. The worst aspect of the mould are the engine pylons. They hang the engines too low and the outer ones are a mirror of the inner ones. This is incorrect as the shape of the outer pylons should be quite different. The mould was only used three times and it is highly unlikely ever to resurface. Once again it is markedly inferior to the NG Models offering.
NG Models (2020)

It was common knowledge for some time that NG Models were making a 747SP, which given JC Wings intervention has perhaps been a disadvantage. NG Models sent me sample moulds equipped with both engine types and I have reviewed them in detail here:
NG Models Boeing 747SP Mould Samples
I also have undertaken a detailed comparison of the 3 available 747SP moulds discussing their good and bad points in detail here: