There's no denying the VC10 is a wonderful plane and a real looker too. Its typically British tortuous development and sales period is well known but suffice to say, as with the Trident, the national carrier (BOAC in this case) created a set of specifications and Vickers dutifully met those only for BOAC to change its mind and leave Vickers with an aircraft that couldn't compete with the Americans due to BOAC's own demands!

In a nutshell BOAC wanted an aircraft suited to hot and high conditions that could use shorter strips. Unsurprisingly this meant its trip costs weren't quite as good as the 707s and by the time production began the hot and high requirements were less of BOAC's focus and most airports had had their runways lengthened. What followed was BOAC bad mouthing the aircraft and effectively sabotaging its sales potential in the face of competition from the very strong 707.

Of the original standard length VC10-1101s only 18 were built - 12 to BOAC and the rest to airlines in hot and high locations. The VC10-1150 (Super VC10) was an attempt to appease BOAC by making the standard VC10 longer thus giving it better economics. Alas BOAC was not easily pleased and still did its best to kill the entire VC10 programme. Eventually however 17 stretched VC10s were delivered to BOAC between 1965-69 whilst 5 also went to East African.

Ironically the Super was an extremely popular type in BOAC's fleet with passengers and crew, and apparently they achieved higher load factors with the VC10s than they did with 707s further going to rubbish the initial claims of BOAC (which were dodgy to begin with). The Supers continued to serve with BA into 1981 when they were retired, finally done in by their high fuel costs and noisiness. Most ended up with the RAF.

Aeroclassics kicked off 1:400 VC10 production in 1999 with a very early mould which had decals applied rather than TAMPO printing. The mould isn't awful but the nose isn't ideal and there is a massive seam along the rear fuselage. These early Aeroclassics are very rare and should be seen almost as testbeds for Aeroclassics later production. They shouldn't be expected to stand up to later 1:400 moulds. Aeroclassics made 10 models (only one of which was TAMPO printed) but they did produce an example in Nigeria Airways first VC10 colours which is still unique in 1:400.
Gemini Jets Standard VC10 Mould (2007)

The Gemini Standard VC10 is a fine mould. A feature of the mould is that the horizontal stabiliser is moveable, though in my experience this means it actually falls off a lot! Gemini have used the mould 10 times for civil versions and 5 times for an interesting array of RAF versions, 4 of which have inflight refueling probes and 3 hose and drogue fuel dispensing underwing pods. The civil versions appear quite readily available and cheap on the seconds market but that is no reflection on their quality. I can highly recommend this mould.
Jet-X Standard VC10 Mould (2007)

You wait eight years for another VC10 mould and two come along at once with both Gemini and Jet-X producing new versions in 2007. I've never seen the Jet-X VC10 mould in the hand but it seems pretty good although the nose appears a bit too pointy and the wing seam joint is quite large and obvious. The proportions of the mould sometimes seem more Super VC10 than Standard. Jet-X have made an impressive 22 models but the majority are RAF examples and for some reason they also made 4 Ghana Airways examples.
Interestingly when Gemini Jets decided to make an RAF example in 2015 it was this mould (nowadays part of the JC Wings inventory) that they used rather than their own previous mould. This suggests that the original gemini mould is now defunct.

The pool of Super VC10 operators was even smaller than that of standard VC10 customers. There have been to date 23 models made from two manufacturers. Let's take a look at the beautiful Super VC10:

Photo by Steve Fitzgerald from Wikipedia

Before Gemini tackled the standard VC10 they released their Super mould. It shares all the characters of the later short version and is very nice. They have used it only 3 times for civil versions however and once for an RAF example so I have standardised on the Aeroclassics mould.
Aeroclassic Super VC10 Mould (2006)

Much like with the Trident it seems Aeroclassics and Gemini were in intense mould competition at this time and like with the Trident they have produced quite unique moulds both of which are great. Aeroclassics certainly used their Super mould a lot more than Gemini with 20 airline releases covering the majority of available liveries. Aeroclassics most recent (2013) use of their mould however didn't go down well as it appeared to be a quick attempt at a Meatcleaver livery version which was very inaccurate.

Comparing the two moulds I think the Aeroclassics is better. The nose on the Gemini seems a bit large whilst the Gemini tail appears rather undersized. The Gemini mould also doesn't capture the slightly nose down angle of the real thing and its wings seem a bit large and chunky.

Thanks to Paul Mills and Gavin Miller for the details about the engines and thrust reversers and Paul for the photo below. 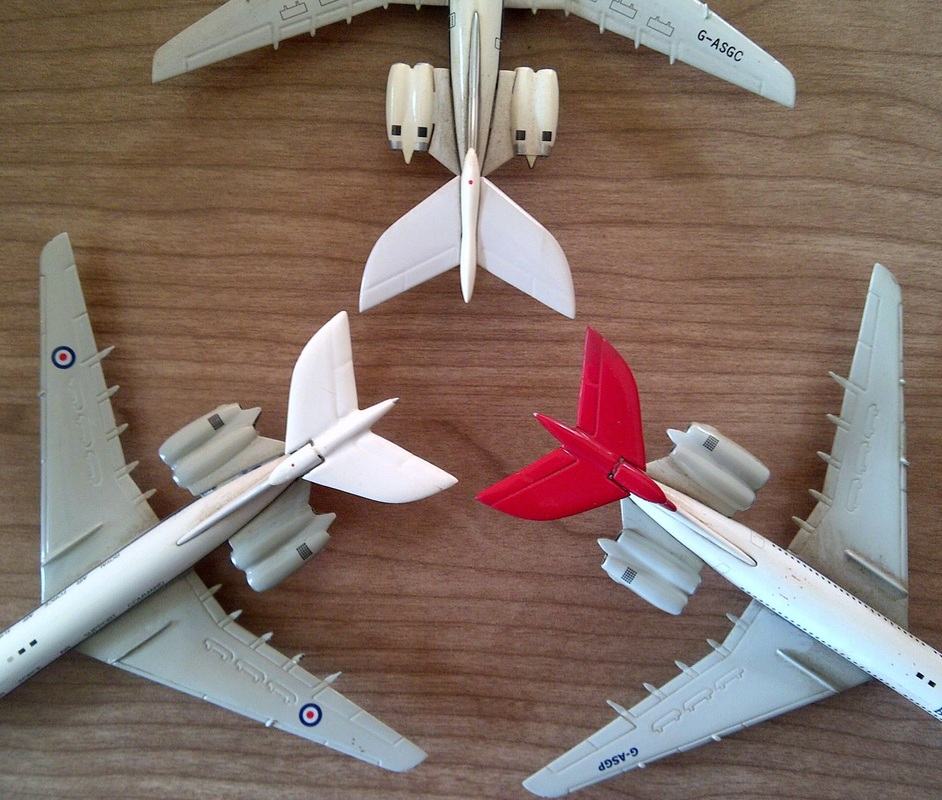