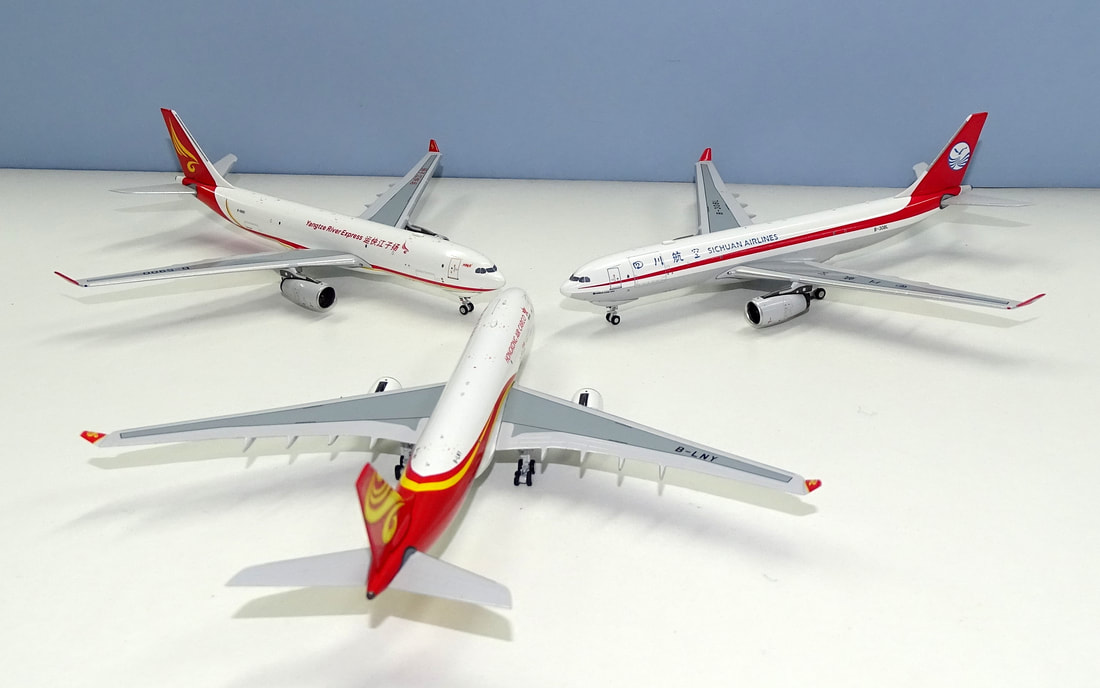 Panda A330-243Fs
The A330-200 Freighter had a long development period spanning a decade. Production of the A300-600F ceased in 2007 but Airbus first declared a freighter variant of the A330 in 2001. This was killed by the needs of the resource intensive and much delayed A380 programme and the A330F didn't resurface until 2006. It was finally launched in January 2007 but further delays meant the maiden flight wasn't until November 2009. Deliveries began in July 2010 to Etihad Cargo though it is fair to say sales haven't met Airbuses expectations! By the end of 2016 only 36 aircraft have been delivered and there are only 6 remaining orders unfulfilled. Perhaps it is just too much plane for its market being rather uncomfortably placed between Boeing's 767-300F and 777-200F. For more on the A330F's development see:  A330 Freighter: The Right Aircraft Right Now?

Anyway from a design perspective the obvious difference between the 200F and the 200 passenger variants is the blister under the front fuselage. This was the chosen method of dealing with the A330's standard nose-down angle. The standard A330 gear is used but it is attached lower requiring the blister for successful undercarriage retraction. The French call the blister "La boufiolle' in reference to a chemist's apothecary jar, which its shape resembles. Otherwise externally the A330-200F resembles a standard A330-200. Obviously this feature is problematic to the 1/400 manufacturers, however in 2017 two manufacturers stepped up with new A330F moulds so the type now has good coverage. 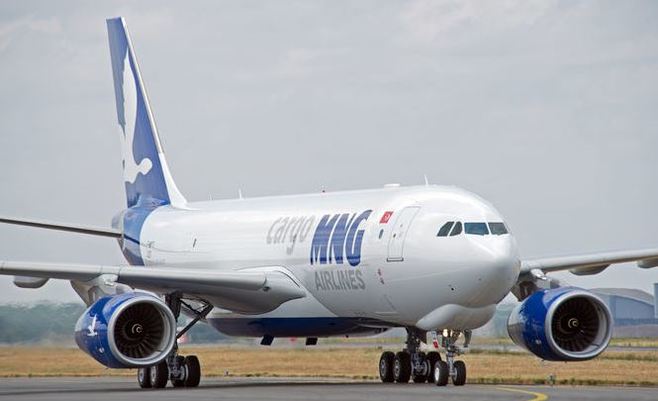 In 1:400 scale there have now been 24 A330F releases (if you include the Aeroclassics non freighter freighter) with the vast majority of those coming since Panda and JC Wings joined the fray with new moulds. Here is a rundown of the moulds that have been made to date. It appears the new NG Models version is a reuse of the Panda mould: 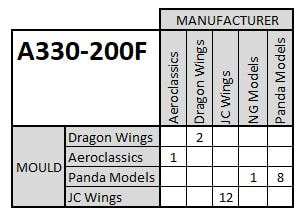 The only civil models Dragon have made since the mid-2000s are Airbuses - usually for Airbus themselves it seems. This is a shame because Dragon had potential and their Airbus moulds were easily their worst! Their A330 is not impressive. As I say in my A330 review:

"For me with the A330 it is the fuselage ahead of the wing, especially the nose, and the forward undercarriage which ruins the model. The A330 has the typical attractive rather symmetrically curved nose however the Dragon model has a much stronger curve to the underside of the nose than the cockpit downward curve giving the whole aircraft a quite odd look. In addition the chunky nosegear appears too short and the whole plance has a rather dumpy appearance not befitting the real thing."

The oddness of the moulds means their freighter version (only two models made both in Airbus house colours but with different engines) successfully fails to solve the problem the blister was added for. The model still has a nose down attitude. On the plus side the blister is part of the fuselage moulding meaning no unsightly joint lines. The wing / fuselage join however is just plain wrong and let's face it the mould is just damn ugly.

Given the small number of series 200Fs built it is surprising that the mould has got any attention in this scale. Having said that with such an obvious difference to a standard series 200 it is down right cheeky to make an A330-200F using the same mould as the passenger. That didn't stop Aeroclassics though, in 2012 they made a single Turkish Cargo example. I guess at the time it was a case of 'better than nothing' for some although there was plenty of justifiable criticism too. AC does fairly often blur the boundaries between aircraft variants by reusing moulds across them (DC-6s, Convairliners, Comets, Caravelles for example). Mostly this seems reasonably justified however in this case I don't think it was, especially as both Panda and JC Wings have found the funds to do the type justice subsequently.

Panda Models 1:400 Scale Model A330Fs
Panda have shown a willingness to produce obscure moulds and to surprise the market with them. Thus it was so with their A330F, which appeared with almost no warning in early January 2017. Panda had only just announced they were even making A330s at that time so the freighter was unexpected. Panda's A330s are excellent and so it is hard to fault the general A330 areas of the mould.

Looking at this version specifically it appears Panda have taken the understandable route of using their A330 passenger mould and adding the gear blister to it. This avoids the expensive task of creating a bespoke moulding but does come with the issue of the attachment of the blister. As you can see below it is ok but not perfect. The shape is fine but the attachment especially at the front is a little poor, meaning there is a small gap when seen nose on. Overall it would obviously have been better to take the Dragon Wings route with the blister part of the fuselage, however I understand why they have not done that. Despite this issue in my opinion it is still the best A330F on the market.

I have reviewed a Panda A330F in detail at Diecast Flier:
Lone Newbie: Yangtze River Express Airbus A330-243F B-5900 by Panda Models 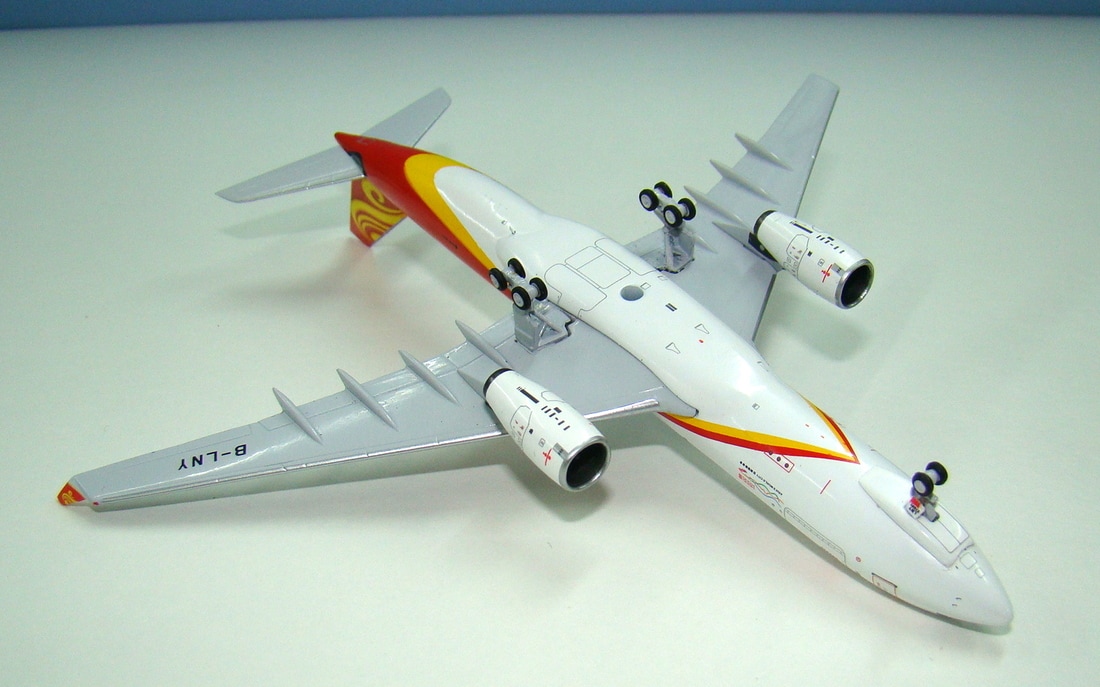 Hong Kong Airlines Airbus A330-200F B-LNY Panda Models 1:400 Scale Model Airliner
In the nearly two years that Panda had this mould active they produced 8 models - all representing Rolls-Royce powered A330-243Fs. That isn't a bad effort but at the same time the mould hasn't got heavy usage, with more than half a year between releases at times. It also appears that Panda lost usage of the mould sometime in 2019.

JC Wings (2017-Present) - 12 models
JC Wings announced their own A330F not long after Panda did but of course their first actual model didn't hit the stores for many months after that. They had had horrible problems with their A330 mould's wings pointing skywards but this was fixed prior to any A330Fs arriving. The JC Wings A330 is the worst, or should I say the least good, of the existing A330 moulds and the biggest detractor is the undercarriage. The nosegear is placed slightly too far back and the maingear is too short, giving the aircraft a tail-down attitude. Ironically the reason the A330F needed the nosegear blister is because the actual aircraft naturally has quite the opposite appearance!

Despite the nosegear being too heavily embedded into the blister the JC Wings A330F still has issues with a level back. As these photos from JC Wings themselves show the tail still sits low and the back isn't level. The maingear is still too short, and in my opinion the nosegear probably is also too short, plus a little too far back. ​

On the plus side, unlike the Panda mould, the nosegear blister is part of the fuselage casting, which means that it is very nicely fitted with no join lines. Also it is worth mentioning that JC Wings are the only manufacturer to have produced an A330-223F with the Pratt & Whitney engines.
In terms of coverage JC Wings have also so far made (or announced anyway) 12 models. There is quite a bit of overlap with Panda Models A330Fs but JC Wings has made MASKargo and a second Hong Kong Airlines.

NG MODELS (2022)
NG announced this mould with little fanfare and that is possibly because it is a reuse of the old Panda mould. I have discussed this possibility in the following blogpost:
NG A330F: Another Panda Mould Reappears With NG Models?
As of mid-2022 only a single model has been produced.
Summary
Both the Panda Models and JC Wings A330s are pretty good and certainly more than worthy of being added to any collection. Personally I prefer the Panda Models version as I think it catches the high undercarriage of the A330 better, however if you are bothered by the blister seam line on the Panda version then the JC Wings mould is probably for you.
A330-200F Wishlist