Thanks to Andrew Klein for his assistance in writing this article.
Aeroclassics is the brainchild of its founder Andrew Klein and was formed in 1998. As its name suggests it has specialised in producing classic aircraft models. They have gone on to become the most prolific and one of the most important manufacturers in 1:400 scale. Over the years their centre of production has moved multiple times and they have consistently produced the highest quality models, but the initial runs of models were very different to those that followed. These first models are collectively known as Generation One.
Unlike almost all 1:400 scale models the first Aeroclassics were spun cast, not die-cast, and typically featured a two-part mould with a substantial seamline on the lower fuselage. The two mould sections are held together by a screw in the underside. Rather than Tampo printing the initial models used decals, but the workmanship was substantially higher than other decal using model lines such as Schabak.
The initial production was undertaken in the United Kingdom's West Country at the factory of Western Models. The models were sold direct to enthusiasts, either at collectors shows or through Aeroclassics retail store in Kent, WA, USA. As the hobby grew other retail stores like Aviation Retail Direct (ARD), in London, and BuchairUSA, in New York, began to sell Aeroclassics releases.
The first set of releases were made in November 1999 and featured the Vickers VC10-1101 and Douglas DC-6. The VC10s received 400 piece production runs and the DC-6s 100-125 units. The very first Aeroclassics model i.e. ACBOA001 was a BOAC VC10 in the Speedbird scheme.
Above: Generation One VC10s. Photos by Aviaction
The next set of releases in December 1999 featured a new mould, the BAC One-Eleven 200/300, and consisted of four models. After this there was a pause until April 2000 when a fourth new mould, the Vickers Vanguard, received two models. Thereafter releases became steady and featured further VC10s, DC-6s and One-Elevens. 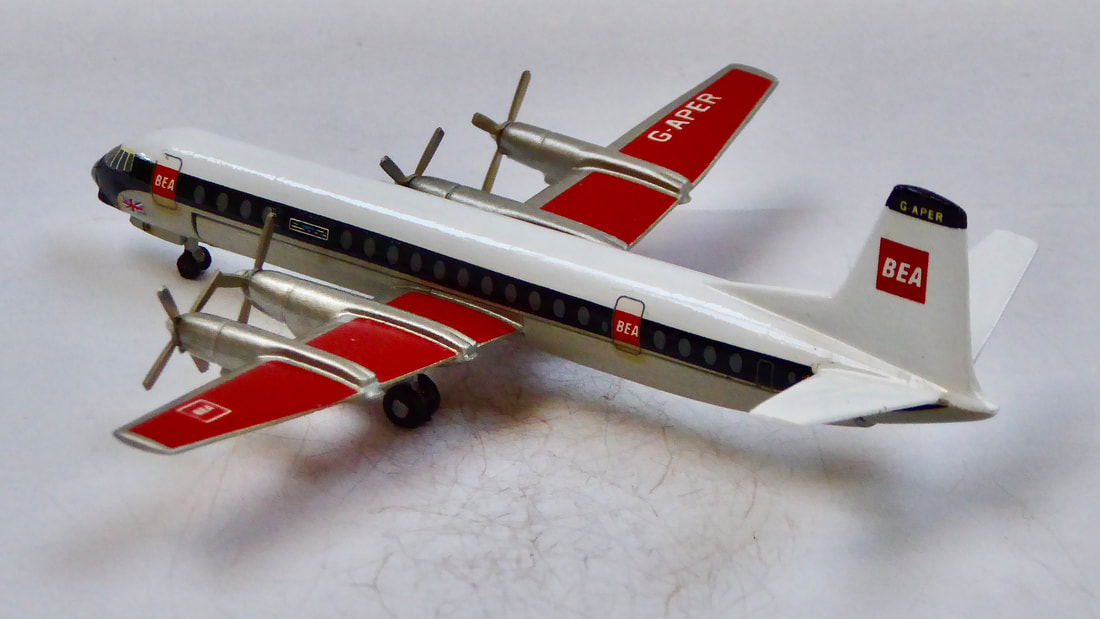 Above: Generation One Vickers Vanguard, BAC One-Eleven (Photos by David Fidler) and Lockheed L-188 Electra (Photo by Bob Sloan)
During 2000 production moved from the UK to the Jinbo factory in Donguan, Guangdong. This was a joint manufacturing site that also produced BigBird models. Later a second factory would be opened and accommodate Inflight and SMA models. Further new moulds joined the Aeroclassics line-up with a Lockheed L-188 Electra in December 2000 and a Vickers Viscount 700 in January 2001. Releases were typically around the 100 pieces mark.

BEA Vickers Viscount 700 G-AMAV (ACBEA049). Photo by Aviaction
There was an attempt made at a Lockheed L-1049 Super Constellation in 2000 but of the two models produced that year neither appear in the official Aeroclassics production list and the numbers built were very small (10 for a Pakistan International and 60 for an Air India). A single production Super Connie was released in June 2001 but the Lufthansa release only had 100 pieces.
​
Generation One Lockheed L-1049 Photo Gallery 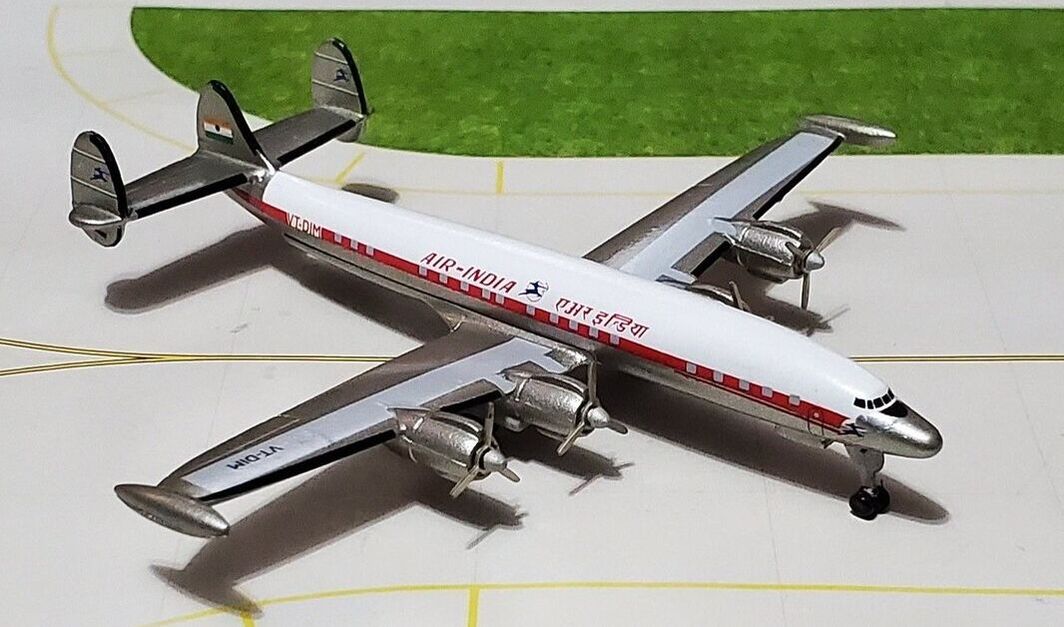 VT-DIM Air India Connie Photo by Paresh
A similar pattern occurred with the new Fairchild Hiller FH-227 mould. There were three varieties (Ozark, Northeast and Nordair), which received tiny runs of 2-5 models. Only one FH-227, a 100 piece Air New England model, was ever officially released, in February 2001. The under-use of the FH-227 and Super Connie was apparently due to the upheaval of moving factories.
​
Generation One Fairchild FH-227 Photo Gallery
Below: Incredibly rare FH-227s from the collection of David Fidler
Interestingly Andrew tells me that there were actually 3 further spin-cast moulds made in the UK - for the Boeing 707-420, Convair 880 and Convair 990. The brass masters were taken to China and formed the basis for the later excellent injection moulds.
The first model made in the Chinese factory was actually not 1:400 scale but instead a 1:500 scale Hughes Kaiser Corporation HK-1 Spruce Goose. This model (part number ACXXXHK1) got a 1,500 piece run in 2000 and a much smaller 50 piece run to coincide with the release of the Aviator movie in 2004. 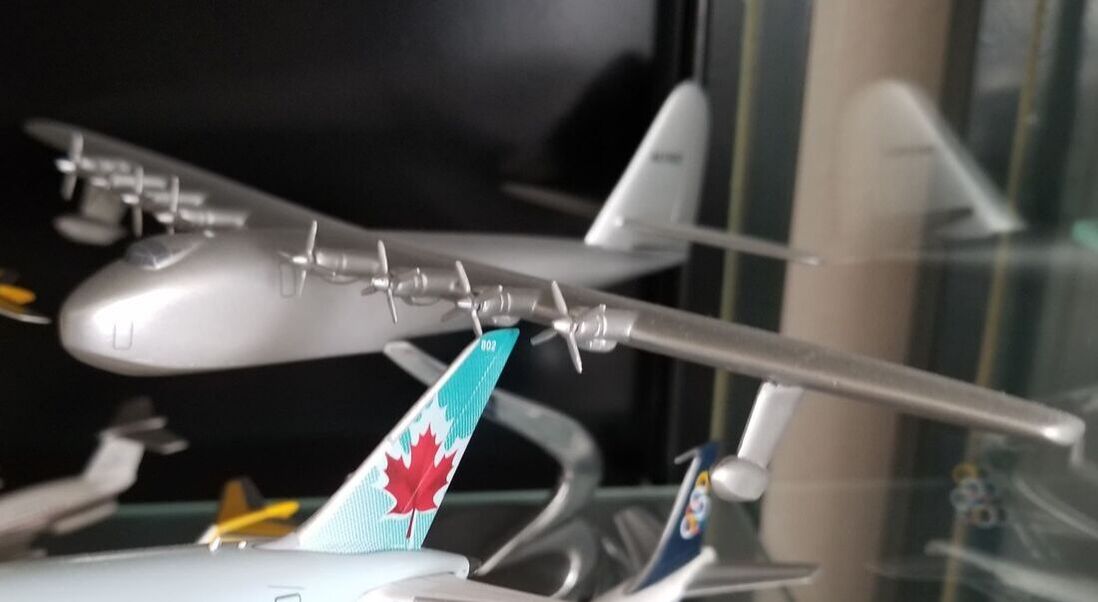 The 1:500 scale HK-1 Spruce Goose. Photo courtesy of Andrew Klein
A major change was instituted in January 2001 on the new DC-9-10 mould, which was the first to feature Tampo printing. Up to this point there had been about 50 decaled releases made. The new printed models had larger production runs of 240-480 units but the only Gen 1 moulds that saw Tampo Printing were the One-Elevens and DC-9-10s. The latter was the last screw bottom mould created but also the most heavily used. There would be 30 DC-9-10 releases running up to September 2002.
Generation One Douglas DC-9-10s

A Tampo Printed Aer Lingus BAC One-Eleven. Photo courtesy of Big Al
By mid-2002 the future of Aeroclassics lay in pure die-cast tampo printed models and the first new moulds featured the Boeing 707-420 and Sud Aviation Caravelle III. These new moulds would lead Aeroclassics into a new era where it would consolidate its position as a market leader of top-quality 1:400 aircraft. The old generation one moulds look crude by today's standards but have a real character and illustrate beautifully the beginnings of classic aircraft in 1:400 scale.
​In total I count 103 generation one Aeroclassics models plus a single PSA Electra made for Jet-X.
Below are screenshots of the production run of the original Aeroclassics releases from the original Aeroclassics website (thanks to Aviaction for the images): 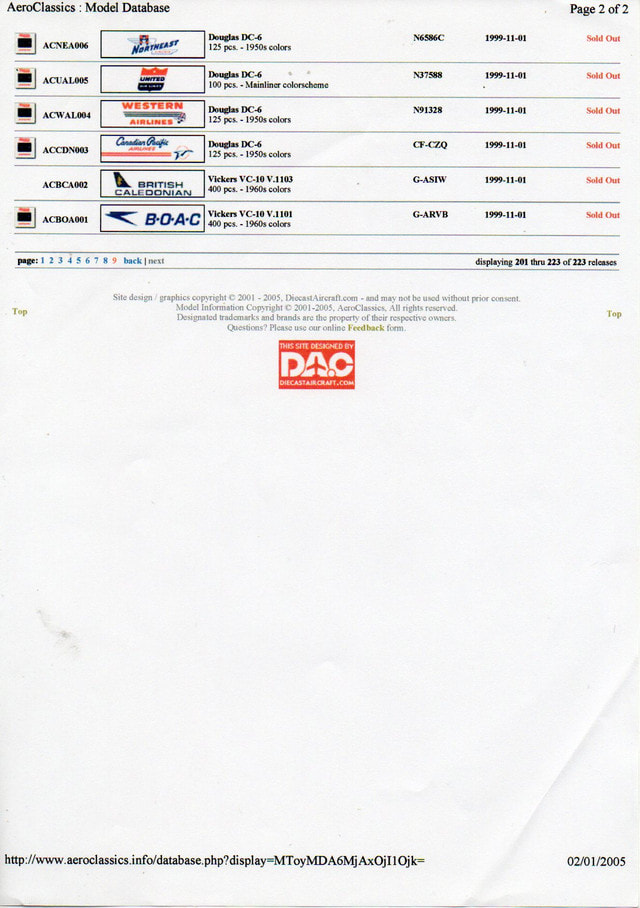 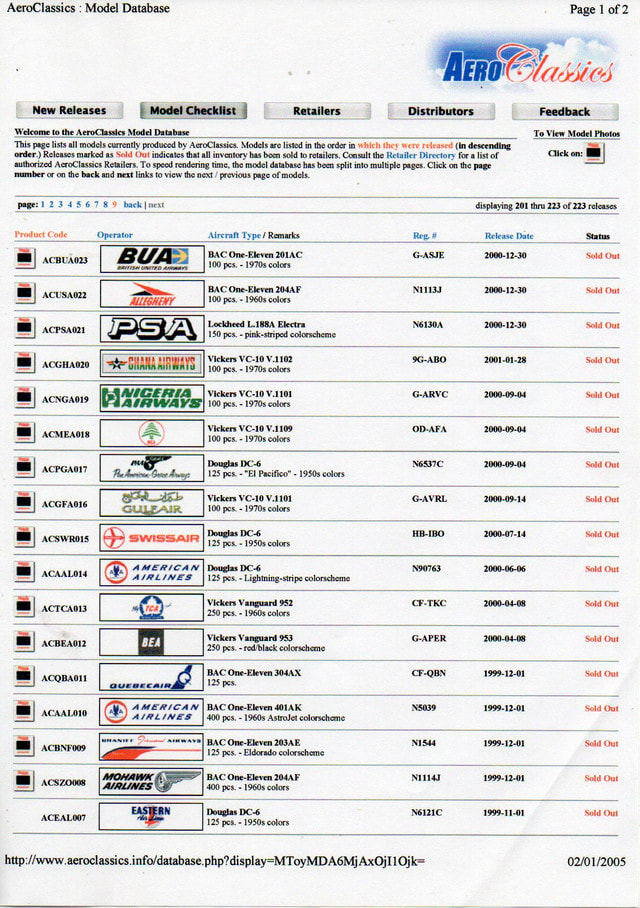 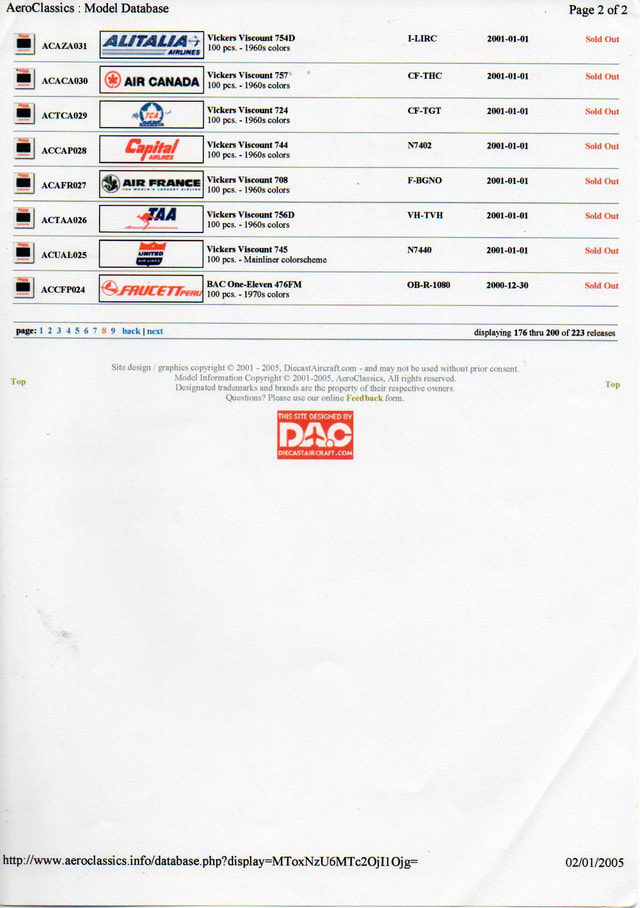 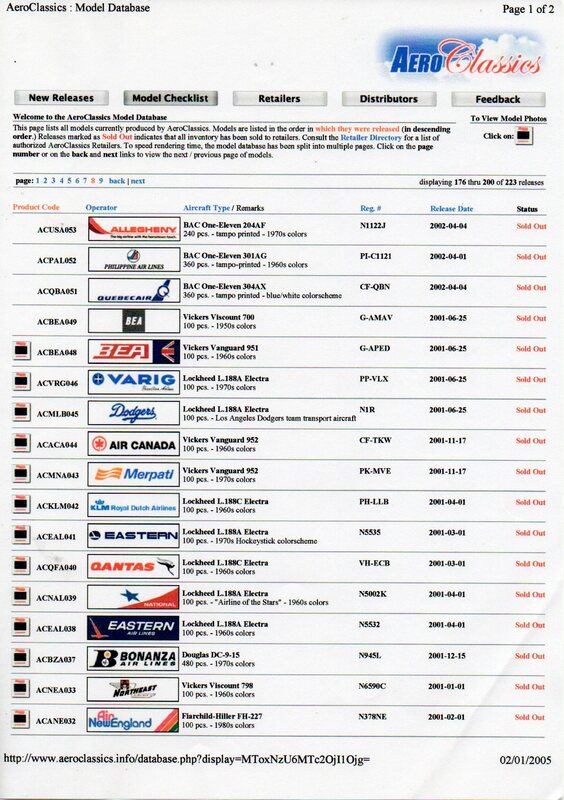 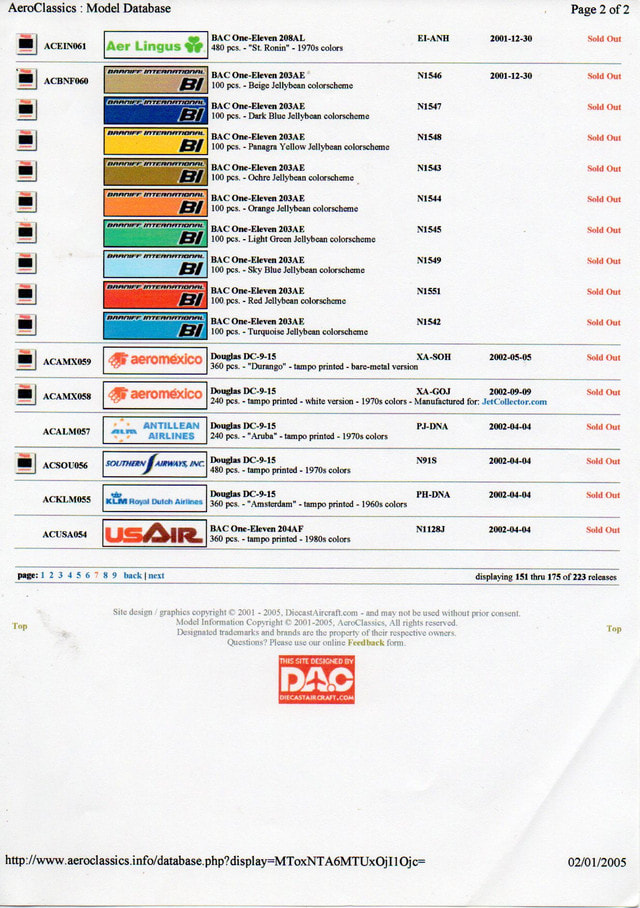 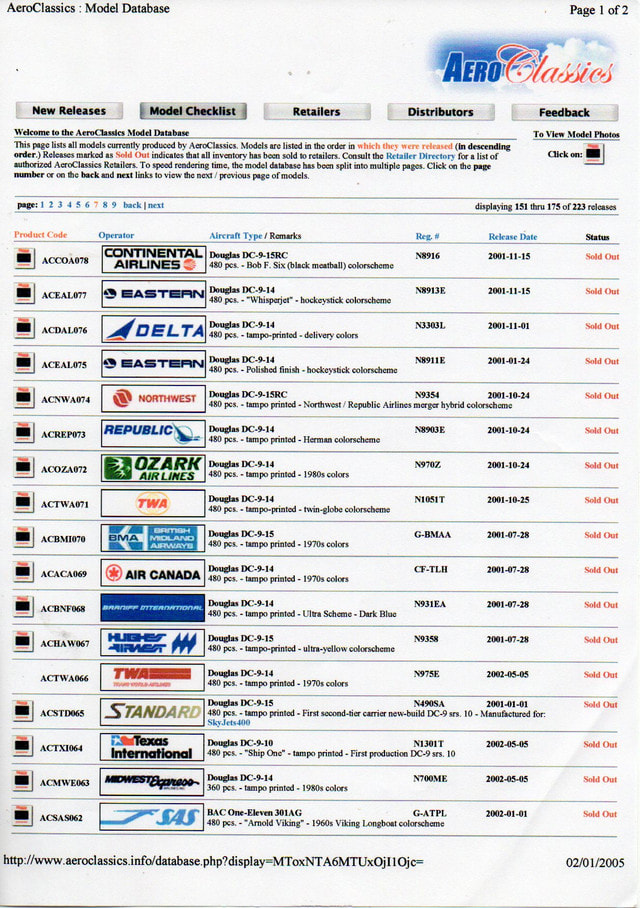 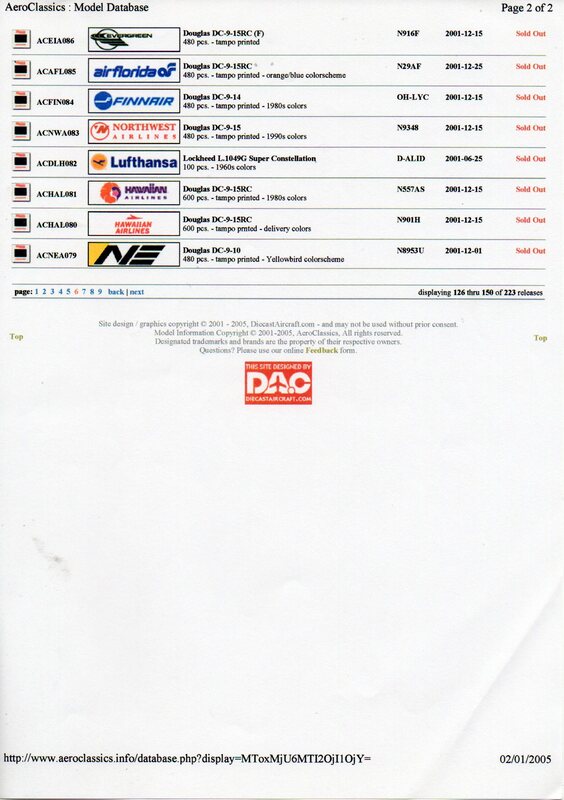 A Snapshot of Andrew's Personal Gen 1 Collection
In addition Andrew Klein has provided me with some photos of his own collection of generation one Aeroclassics, which also features some unique models made either exclusively for him or in very small numbers. In the below photos the Merpati L-188 Electra is one of about 20 pieces made while the Eastern and National DC-6s are unique one-offs