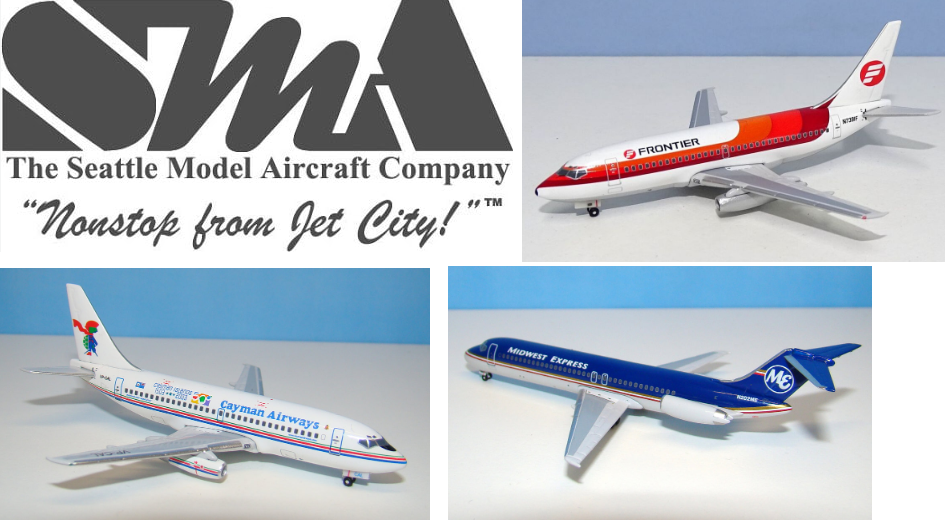 Thanks to Gordon Werner, for his invaluable assistance in answering my questions, and also to Andrew Klein
Seattle Model Aircraft Company (SMA) was both a brand and developer of its own 1:400 scale moulds between 2002 and 2005. Although it lasted for only a short period its reputation was, and remains, excellent. Briefly SMA competed strongly in the 1:400 market, but within a short period it fell foul of the actions of its competitors and was forced out of business.
​Seattle Model Aircraft Company (SMA) was initially formed in 2002 by Gordon Werner and the owner of Aeroclassics Andrew Klein. Werner was a major figure in the early years of 1:400 scale. He had already been the founder of the Diecast Aircraft Forum (DAC) website in Mid-1998. DAC remains, in my opinion, the hub of diecast aircraft knowledge and still ranks many of the original group of collectors among its membership. Werner gave up control of DAC to wings900 in July 2004 and it has been on-sold again since.
The 737Club

Each model got 744 pieces and all three remain excellent and colourful models (I own all three purchased second-hand). When I asked Gordon about the start of the 737Club his response was:
"The genesis of this all was the Gemini 732 mould … which they just wouldn’t utilize and personally a desire to make the PLUNA Sun god plane (which I did eventually get made). We figured that we could release a bunch of cool, interesting, limited releases that true collectors would really like — but that might not have the broad appeal that the normal Gemini Jets line would require. Making it a subscription club was the way to not have to deal with unsold inventory while still creating collectible models. Would have worked quite well had we been able to continue with our plan — but Gemini scuttled that quickly."
Unfortunately the 737Club was not a success . The club did not outlast the first year and Werner's association with Gemini Jets also ended at this time. This was because:
"Gemini Jets quickly reneged on the agreed upon plan, ignoring the list of models that we requested to have made and instead began ‘feeding us’ models that while interesting, were not part of our production plan."
Gemini had already made a sample model of the Air Nauru 737 so the history of releases backs this up.
Seattle Models Co (SMA)
Werner's experience with the 737Club led him to start his own company. This he did in association with Aeroclassics' Andrew Klein. The initial idea was for Aeroclassics to focus on classics and SMA to focus on more modern releases, with some cross-pollination between the two. When SMA was formed it was as not just a brand but an actual manufacturer.  ​SMA’s models were made in the same original Jinbo factory as Aeroclassics and BigBird were, but the moulds were owned by SMA. About the startup Gordon had this to say:
"All you need is a factory and some seed capital … the business becomes pretty self-sustaining after that (provided you have the right product). We had the capital and Klein had a factory. The trick is funding the mould development ($10-30,000US) and the first release or two.  If you do the work right, then things become self-sustaining pretty quickly. The first release or two funds the next two, and so on and so forth. Pretty soon you have enough capital to make a second mould (or 2nd/3rd/4th with the DC-9s). "
SMA’s first mould was a 737-200 and as far as I can tell the first release was a USAir example in October 2002 (if I’m correctly reading the part number which as SMA021001 suggests they have the format SMAYYMM##). In relation to why he began with a 737 Gordon says:
"Well the 732 is one of the most well used airliners and one that while classic was recent enough for most people to have seen or flown on one. So the potential for release material was unlimited. The DC-9s just made sense as we could make the 30/40/50 at the same time and because like the 732 it wore a lot of suits that people would be interested in. Also initially the idea was to continue the 737 club with our own mould but we then realized that we didn’t need to restrict ourselves in the marketplace since we had a good product."
The mould and printing are both excellent for the time and certainly it is a superior 737 to the old Gemini moulding (still being used at times today). Releases continued rather sporadically into 2003 and SMA was able to use Aeroclassics 727-100 casting a few times also.

SMA030601 AirWest 727-193 N898PC (Aeroclassics mould)
​In 2003 SMA announced and delivered a series of new castings for the DC-9-30, DC-9-40, DC-9-50 and 737-100. The 737 remains excellent and at the time the DC-9s were the best available (they have been eclipsed since by the Aeroclassics version). See my DC-9 and 737-200 mould reviews for more details.
​By this time ownership of SMA was with Gordon Werner and his friend Sam Otis, whom Andrew had sold his share to. Later a third co-owner was added called Tom Harris. Unfortunately the positive word-of-mouth that SMA's products were garnering on forums, and the high quality products, was ruffling the feathers of Gemini Jets. This was exacerbated when collectors began to compare Gemini models to those of SMA, and was no doubt inflamed by Werner's ownership of DAC.
In October 2003 Gemini took the unusual stance of publishing a bizarre letter on their website warning of slanderous comments against Gemini, a renegade website (i.e. DAC) and 'recruited' collectors. Gemini never seem to learn that this kind of thing back fires as they tried it again against different parties in 2019!
There was also a notorious 'parking garage incident'. Apparently a group were on the parking garage next to In 'n Out burger - the famous spotting spot near to the runway at LAX. This included the SMA leads. The arrival of one or more Gemini principles created an argument, which included threats to get SMA thrown out of their factory.
Both Gemini and SMA had announced AirTran DC-9s at roughly the same time but as pointed out on DAC (and in my DC-9 review) the Gemini mould is distinctly inferior.

SMA040401 North Central DC-9-51 N772NC
It seems that relations between SMA and Aeroclassics were also souring. In April 2004 SMA released their first and only widebody a United ‘battleship’ Boeing 747-123 using the BigBird mould. The success of this model caused more trouble for SMA and future uses of the BigBird moulds did not eventuate, although some were planned.
"We never hyped our product … we just released cool things … even with all the work we put into it, errors still occurred but nobody really complained because we never trumpeted that they were the best thing ever like some of the other manufacturers … and we didn’t buy into the hero-worship angle of the hobby … so we were having fun, making money and being successful that that scares certain kinds of people. We were fine until we were a threat (or seemed to be)."
Apparently the Jinbo factory by that time was owned by Witty and they had a deal in the works with Gemini, who were themselves looking for an alternative factory. One of the pre-requisites of the deal was that SMA had to go and so Witty threw them out of the factory. SMA did not owe the factory any money but the factory broke the contract they had with SMA and as Gordon says: 'without a factory you have no business".
It seems that Aeroclassics did not intervene to stop this train of events and the SMA owners saw it as a conspiracy against them to the extent that they launched legal proceedings in the USA against Andrew. These were eventually settled but it sounds like it was expensive for all concerned.
It was a sad end for a company that showed a lot of promise and the end result was certainly not in the service of collectors or the hobby in general. SMA had a selection of unrealised future plans:

"We were about to transition to 1:200 scale which I think scared everyone … first moulds were going to be an excellent, accurate 731/732 and DHC7 in 1:200 based on CAD data from Boeing and Bombardier. The ultimate plan was that we’d unveil a new mould at a collectible show with house-color samples for sale (so as not to compete with dealers at the shows). Dealers would also be able to order them for their customers who were unable to attend said show(s) before releasing the mould in airline liveries … stuff like that."