I admit I was surprised by NG Models' reveal of their new Boeing 777 moulds as I had been expecting 747 Classics (don't worry I'm told they are still coming) but considering NG's strategy so far the Triple Seven fits nicely into their lineup and does offer some impressive potential for excellent new models. That is especially true of the 777-200/200ER, the original variants that were a popular subject for early 400 scale releases but that have been somewhat ignored in the past decade.
EXISTING MOULDS 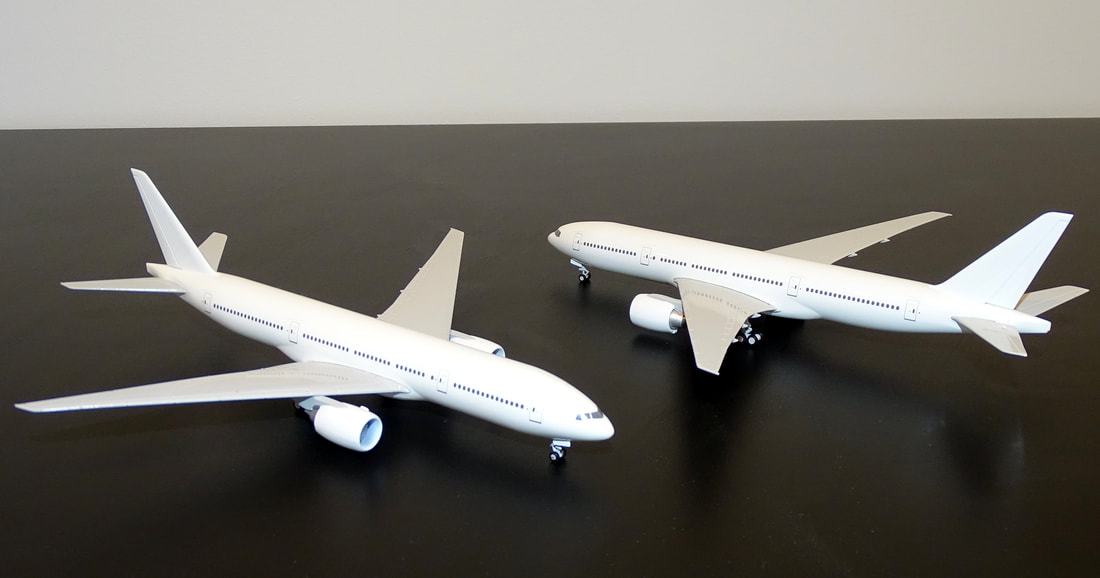 Certainly the creation of new 777s is another major challenge to existing 400 scale brands, especially Gemini Jets and Phoenix. I have reviewed the existing moulds for the 777-200 already at the site:
Boeing 777-200 Mould Review
There have been 8 previous series 200 moulds - three of which (Herpa, Dragon Wings and Gemini Jets) date from 1999-2001 with even the Phoenix version originally debuting in 2004. These four moulds account for nearly 400 of the 477 or so 777-200s made in 400 scale and although both the Gemini and Phoenix moulds have been updated across the years, with new rolling gear, aerials and engine fanblades, fundamentally they are all first generation moulds.

The Gemini Jets mould suffers especially from an old fashioned cradle mount with seam and all have a rather generic set of engine options. Of the 112 777-200s Gemini has made only the last four have finally switched over to the 2018 JC Wings mould and this is possibly only to take advantage of the flaps down offering. The new JC Wings mould was, until now, the first new 777-200 since the 2012 Witty/Apollo mould and is by my estimation an excellent offering so it will be interesting to see how this new NG Models version compares.
THE MARKET

In terms of production and the challenge to existing manufacturers I see it as follows:

Gemini Jets: Probably more than any other type Gemini has had something of a stranglehold on 777-200 production since their partner JC Wings actively avoids making competing models and Phoenix rarely make non-Asian aircraft (aside from KLM and a few others). That means there is a significant number of old Gemini 777s desperate to be remade, especially targeting the US market Gemini is so protective of, and, given the weakness of even the updated Gemini mould, plenty of fairly recent Gemini 777s that a new mould would easily improve upon.
Phoenix: Phoenix have recently been using their updated 777 mould quite a bit, especially for some classic 777s, but there is no doubting that NG makes a superior product overall, despite the Phoenix 777 being well liked. Considering the sheer number of 777s Phoenix produce NG must be a real threat.

JC Wings: They are in the best shape to weather a new 777-200 from NG as given their agreement with Gemini they produce only a small number of 777-200s anyway. Typically when they do their release to market is incredibly long.

Used correctly the new NG 777-200 could offer a steady stream of very nice replacements for older 400 scale models as well as some modern freighters and a few never before made airlines. I'll take a look at a 777-200 wishlist in the coming days.

NG Models have provided me with two Boeing 777-200 mould samples each with a different engine option. It is clear from these that NG are targeting mould accuracy above everything else and this has led to some interesting decisions out of step with other manufacturers. It'll be interesting to see how this is recieved by collectors. Also obvious to the eye is that unlike previous mould samples provided by NG these come complete with printed cockpits and windowlines. That makes it a lot easier to tell what the finished article will look like.

777-200 with PW4000s
NOSE, COCKPIT & NOSEGEAR
At the nose there is a lot to unpack. The shape of the nosecone and change of angle upwards to the cockpit is very good. I am a little less impressed by the curve upwards from the cockpit to the fuselage roofline. It seems a little too straight and the curve where it meets the straight rooftop is a little harsh.
The cockpit printing is also good but not perfect. The windows are mainly well sized and shaped but the upper margin does appear to droop ever so slightly towards the outer windows when it should be a straight line. It only impacts the outermost window and is minor but the shape of that outermost window could do with some modification at both its upper and lower margins.
The nosegear leg is fine but sturdy and shows some nice detailing. The nosegear door is positioned and angled well but not large enough to my eye. I think it should be deeper by a small amount.
WINGROOT & MAINGEAR
I am really liking the shape of the wingroot and its join with the wing itself. The fit of the wing is extremely tight, with no obvious join and the fairing shape is very good both fore and aft. The shape of the maingear doors is equally impressive. They are the right size and shape and have a lot of detail - even the small lip on the forward lower margin. The maingear legs have a lot of detailing and in search of accuracy NG does NOT provide the pivoting maingear commonly found on other 777 moulds. Considering the models are almost always displayed on the ground I don't think this is an issue if it means extra-realism.

One issue (noticed by Tcaeyx) is that the 777-200 should not have the hydraulic actuator on the maingear leg (the forward metal pole connecting to the gear trucks) as this is only on the 777-300ER. Interestingly one of the 77W samples they sent has the correct gear for a 777-200 so maybe it is just a fitting mistake? 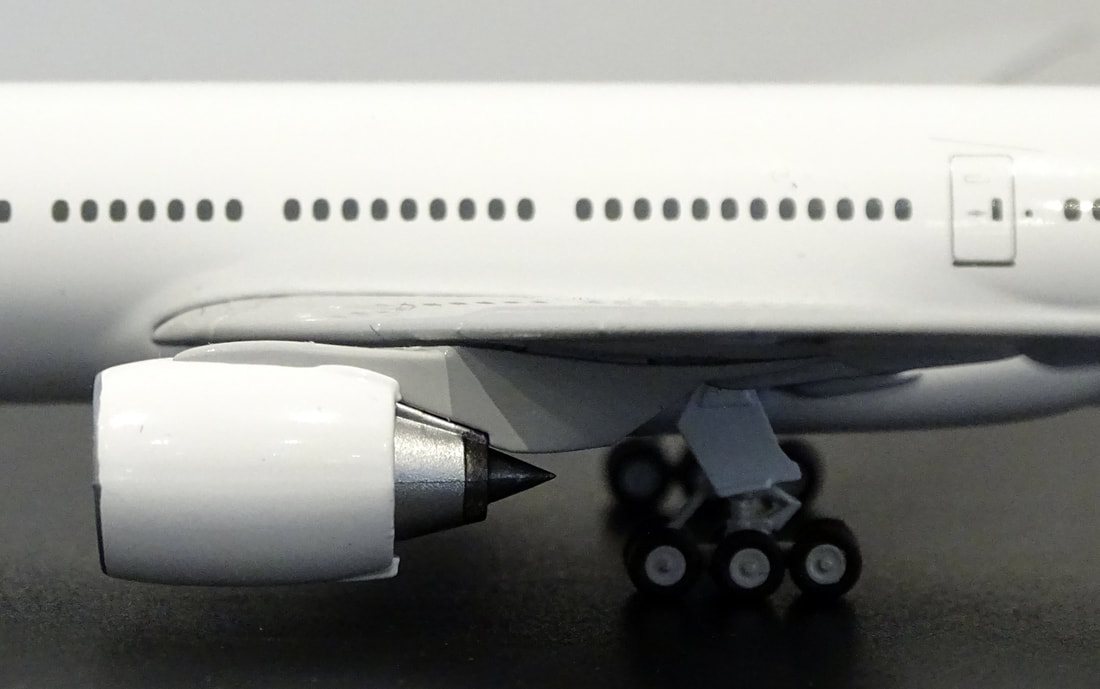 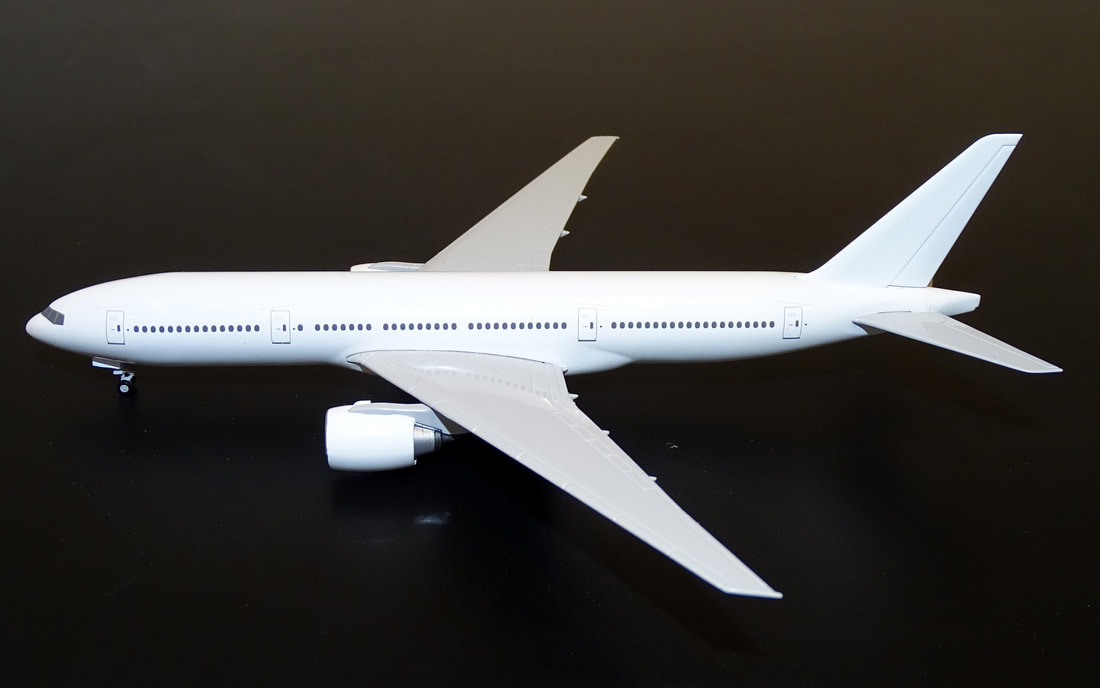 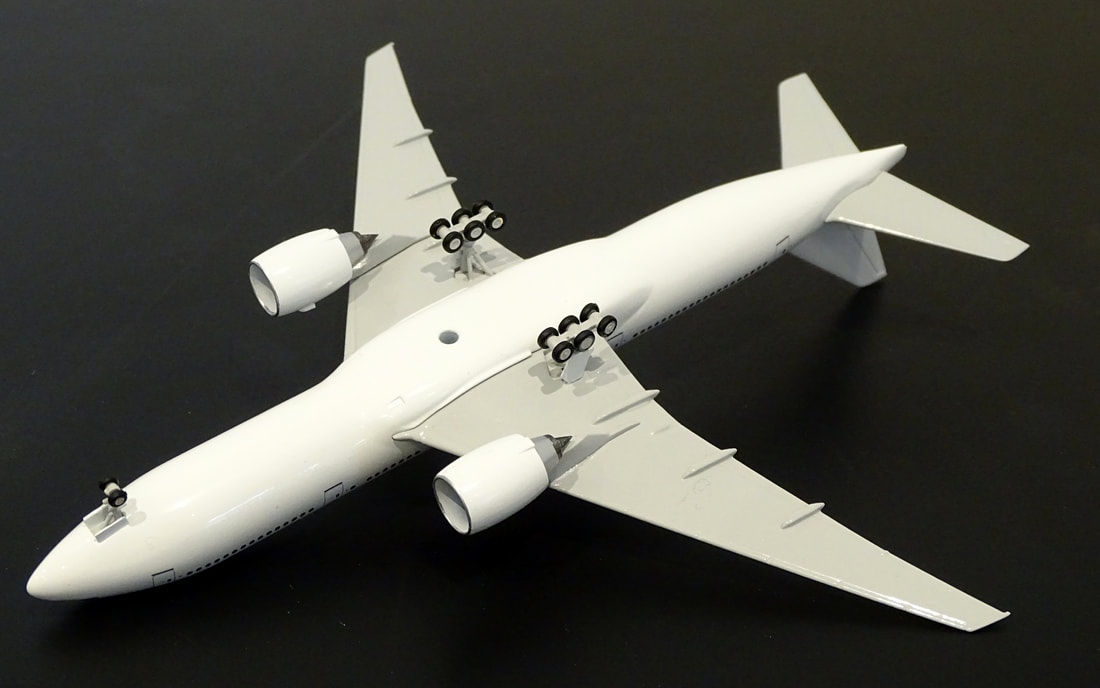 777-200 with GE90-94Bs
WINGS
The wing dihedral is accurate and the overall shape of the control surface fine too. I am however less satisfied by the flap track fairings or at least the innermost one anyway. This fairing is different to the others in that it has more of a bulge on its lower margin and I do not think that the NG sample shows this. Instead the sample inner flap track has the same thin profile as the outer ones.
TAIL & REAR FUSELAGE
The shape of the vertical stabiliser is good and likewise the shape, fit and dihedral of the horizontal stabilisers is nice. I am a little surprised by the tailcone. Although it has the essential screwdriver shape of the 777 it lacks any attempt to show the small protrusions at the top and bottom. There is always a risk that they might be too large (see the AV400 77W) but JC Wings has shown that they can be modelled in well on their 777s.

Additionally (as noticed by airlinestrategist) the rudder detailing is incorrect. The rudder should go to the top of the tail and have a rectangular hinge box. Also the rudder on the 777 has a separate section in it slower half in case of a main rudder jam and that detail should be visible on the mould too.

Lastly the printed windowline on these samples appears a little too high at the rear in comparison to the neutral position of the horizontal stabilisers.
ENGINES & PYLONS
Probably the biggest differentiators for the new NG Models 777s are that NG have gone to the trouble to create separate mouldings for the different engine options, including pylons, rather than creating a generic engine version. This is why I have two versions of the 777-200 sample - one fitted with General Electric GE90-94Bs and one with Pratt & Whitney PW4000s. The 777-300 samples also have different engines (GE90-115Bs and Rolls-Royce Trents) and I'll look at those in the next review, but all four engines gives a complete set of 777 engine options.

777-200 with GE90-94Bs
Aside from having these separate versions NG Models' drive for accuracy means they have decided NOT to go with see through fanblades or spinning fanblades. Both of these features do impede accuracy and so instead NG have used traditional solid score engines to try and represent the most accurate shape.
General Electric GE90-94B
The earlier GE90-94Bs have straighter fanblades than the later GE90-110B series (see upcoming 777-300 review) and also have blades of a slightly narrower diameter too. Sizewise I can report the engines are definitely slightly smaller with the GE90-94Bs and the number of blades is represented well, much better than it could be with see through blades. The shape of the engine rear and pylon, behind the nacelle, look good to me. Are the fanblades a little too curved - maybe slightly yes.
Pratt & Whitney PW4000
The PW4000 series engines appear slightly smaller in diameter compared to the GE90s and the engine pylon attachment to the nacelle above the engine is very different. The rear portion of the engine is also different and has a wider attachment at the rear pylon. The shape of the engines is good, although with the silver it is a little hard to make out the engine fanblade detailing. They certainly look very different to the GEs.

NG Models attention to detail with their new 777s is commendable and I for one am happy to pass up features like see through engines and spinning blades if it means more attention to detail (and less parts to have QC issues). I have been tempted by several of the recent Phoenix classic 777-200s but not enough to actually buy them and now I am glad I haven't. This new NG 777-200 offers an excellent mould with great engine options tailored to the actual aircraft rather than genericised.
Even so, there is room for improvement in quite a few areas. I would like to see mods to the following areas:
As it stands this is still a good 777 and has the drop on the current best series 200 by JC Wings in terms of the fuselage/wing join and engine styles.