During the 1950s it was far from clear that the pure jet was the future and many airline's and industry observers thought there would be an extended period of turboprops. This resulted in such great aircraft as the Viscount, Britannia, Vanguard, IL-18 and the Lockheed L-188 Electra II. Only the Viscount and IL-18 can be considered real successes, however initially the Electra sold well, with American Airlines the launch customer for 35 in June 1955. By the time the first aircraft flew in late 1957 Lockheed had accumulated orders for 129 aircraft with initial deliveries, to Eastern, beginning in October 1958. The type could seat 66-98 passengers and had excellent short field performance however initial aircraft suffered from noise and vibration in the forward cabin. This wasn't the only issue as between February 1959 and March 1960 three aircraft flew themselves apart in mid-air as a result of resonance vibrations from the engines. A costly modification programme fixed the aircraft, which were often renamed Electra II's (technically they were anyway as Lockheed's L-10 was already the Electra). Needless to say the bad press killed the type's sales and cost Lockheed a small fortune. In the end production ceased at 170 aircraft though most went on to give long service, especially as freighters. The type sold especially well in Australasia and South America however even without its well publicised issues it's hard to see how it could have competed against real short-haul jets like the Caravelle, One-Eleven and DC-9.
As of July 2017 in 1:400 there have been the following 122 releases (including 9 P-3 Orions which I won't be reviewing here):
Aeroclassics Mould 1 (2000)

Between 2004 and 2015 Aeroclassics have made 66 releases on their updated Electra mould whilst Jet-X used the mould once in 2004 for a PSA release and Gemini once in 2005 for an American Airlines release. The mould has caught some flak ever since it was released and with some justification. The Aeroclassics release has been called tubby however I don't think that is actually the case. It is more that it is too short ahead of the wing. Looking at the photo comparison below this is quite clear to see. There are other issues too as detailed way back in 2006 by Gavin Miller: 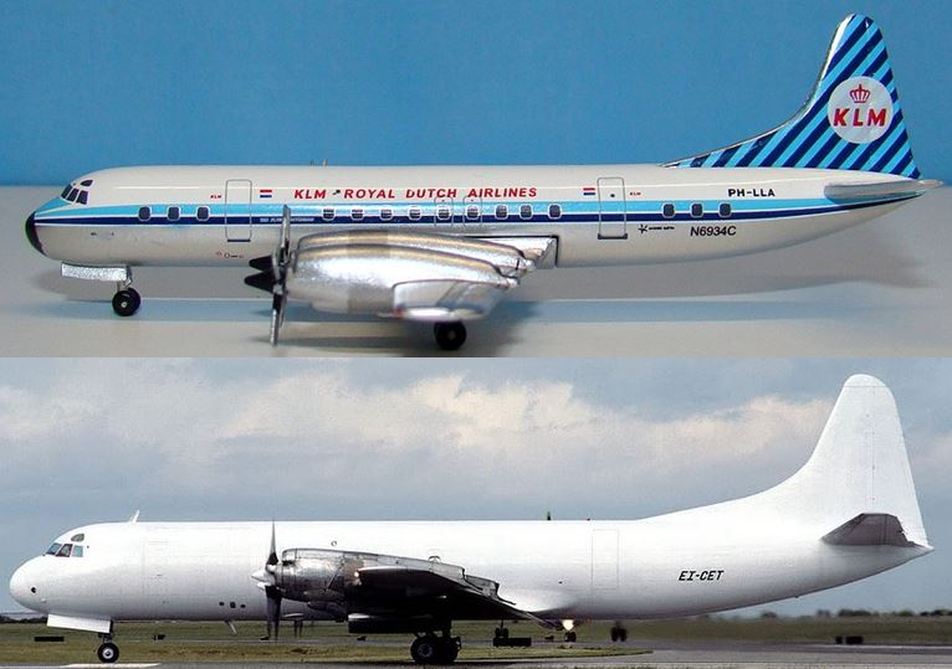 Aeroclassics L-188 Mould Comparison
There is obviously also a fairly obvious fuselage seam and the nose shape though close isn't perfect either. Despite all these failings I have to say that I like the mould and own a lot of Aeroclassics Electras. I still think the spirit of the Electra is captured well even if these problems are present, but in reality the failings are plentiful. Aeroclassics has shown no interest in recreating the mould (they have updated it with rolling gears (see the KLM above)) and soo many Electra's have been released now I can't see anyone else stepping in with lots more so I have chosen to standardise my Electra fleet around this mould even with the failings.
Dragon Wings Mould (2004) 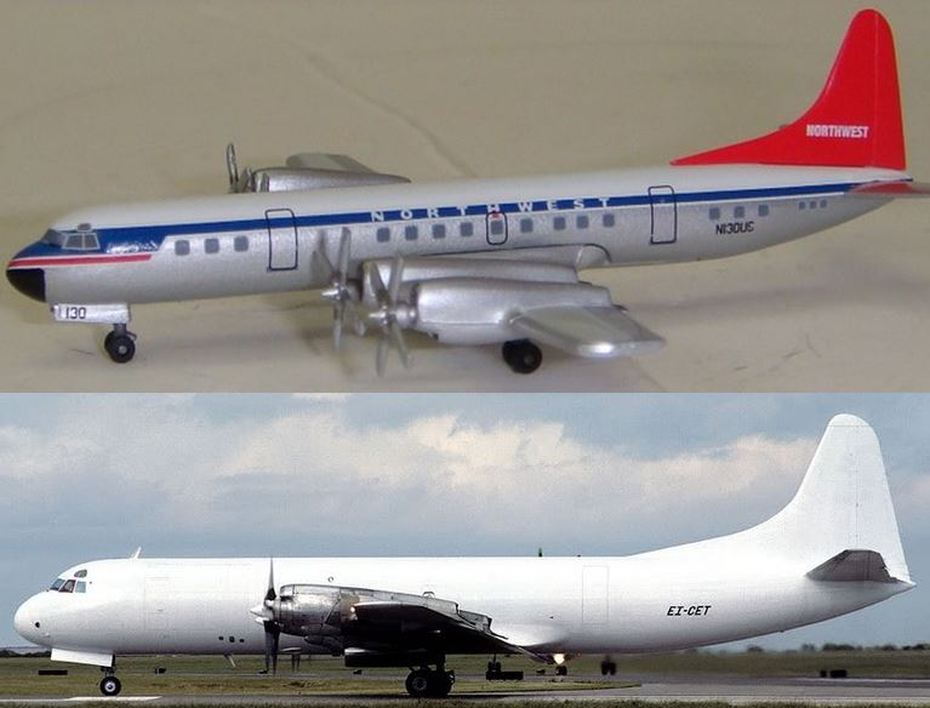 If people think the Aeroclassics mould looks bad then they must think the Herpa mould looks appalling. It's incredibly bloated so that it looks too heavy for it gears. In addition the shape of the tail and engines is all over the place. Fortunately being Herpa the mould in 1:400 has only been used 3 times. In my opinion this is the worst of the moulds out there.

The new Jet-X split from Dragon and began to use moulds from the Witty and JC stable. In 2008 a new Electra appeared and this has been used 13 times by Jet-X and 6 times by JC-Wings. This is probably the best of the Electra moulds, though I have always thought that its fuselage was a bit too slim and long. The cockpit windows aren't printed as flat panels however the shape of the upper engines is correct as is the tail. The wing seam is also small and relatively discrete. I'm less impressed by the contouring of the engines sides which appear a bit slab-sided and the nosegear bay doors are too large and don't angle upwards. Additionally on some models Jet-X have done what they regularly did and printed the cockpit windows incorrectly. They certainly don't know what colour Ochre is - see the Braniff example below! However when they got it right this mould looks pretty good and I think I may track down some of the releases if I can. 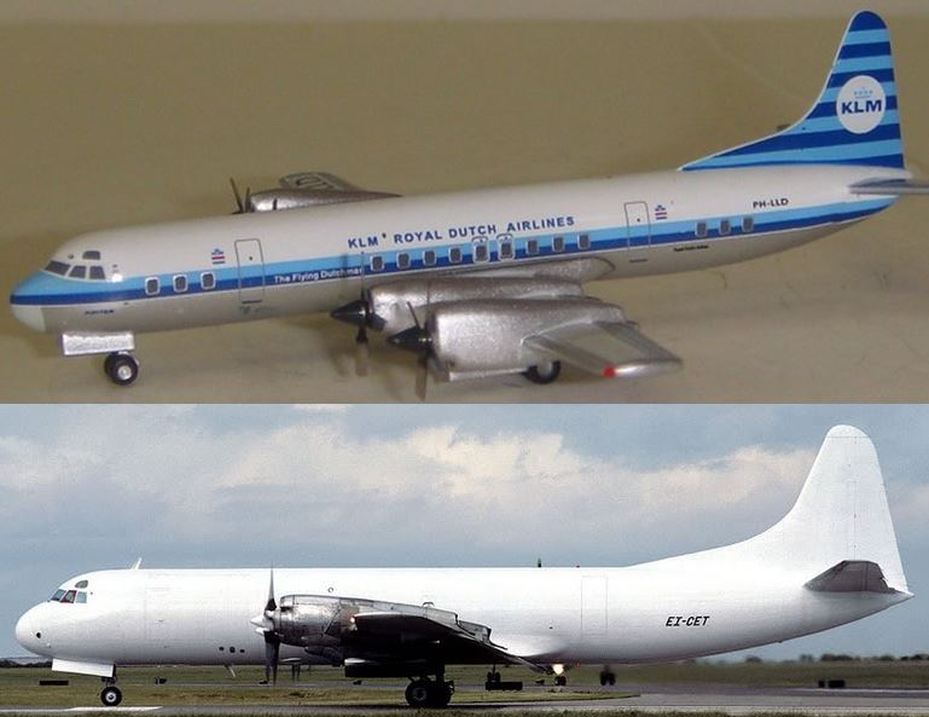 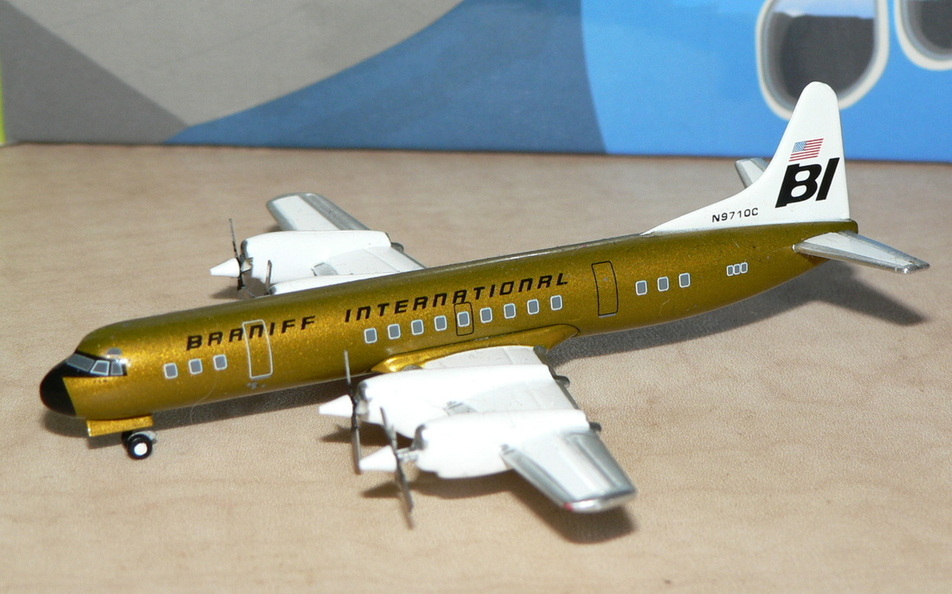 Jet-X L-188 Electra Mould. Allegedly this is Ochre but in reality it is nothing like it