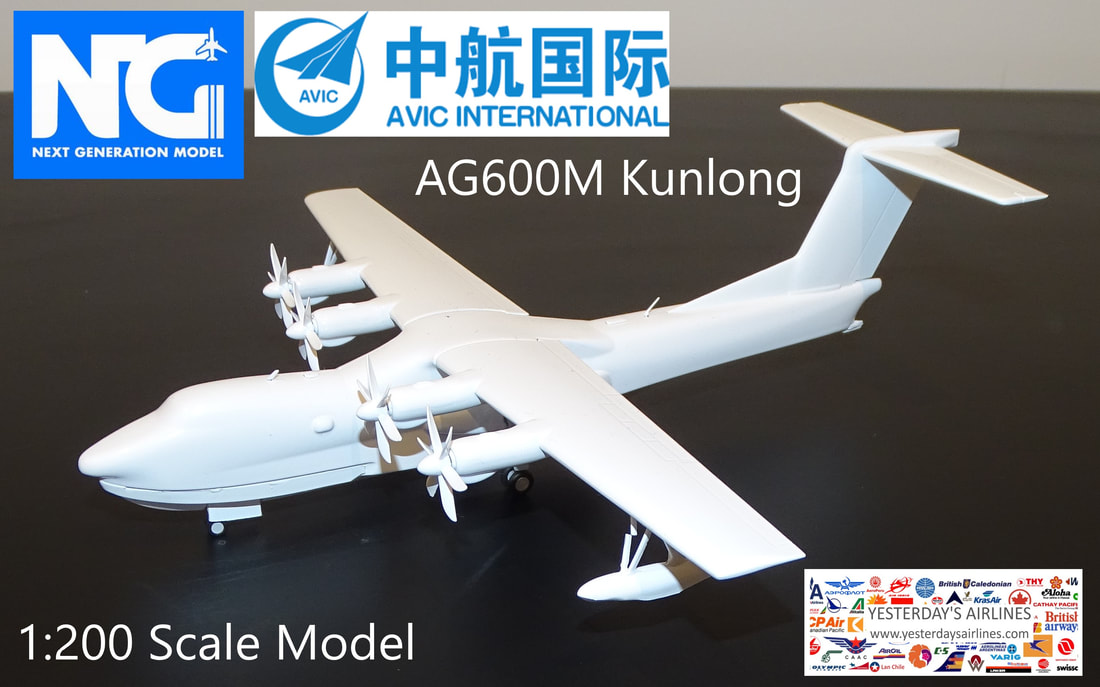 200 Scale has not been a strong focus for NG Models so far but that still means it has access to 5 moulds (CRJ, ARJ-21, C919, Falcon 7X and Gulfstream G550) and has released 82 models in the scale. The types selected so far are a little idiosyncratic but focus on smaller types less viable in 400 scale. It is also no surprise given its Chinese heritage that it has shown great pride in the strides China has taken with indigenously produced aircraft. Given both of these points the AVIC AG600M is a clear and obvious gap in their mould catalogue although I have to admit it took me by surprise nonetheless! 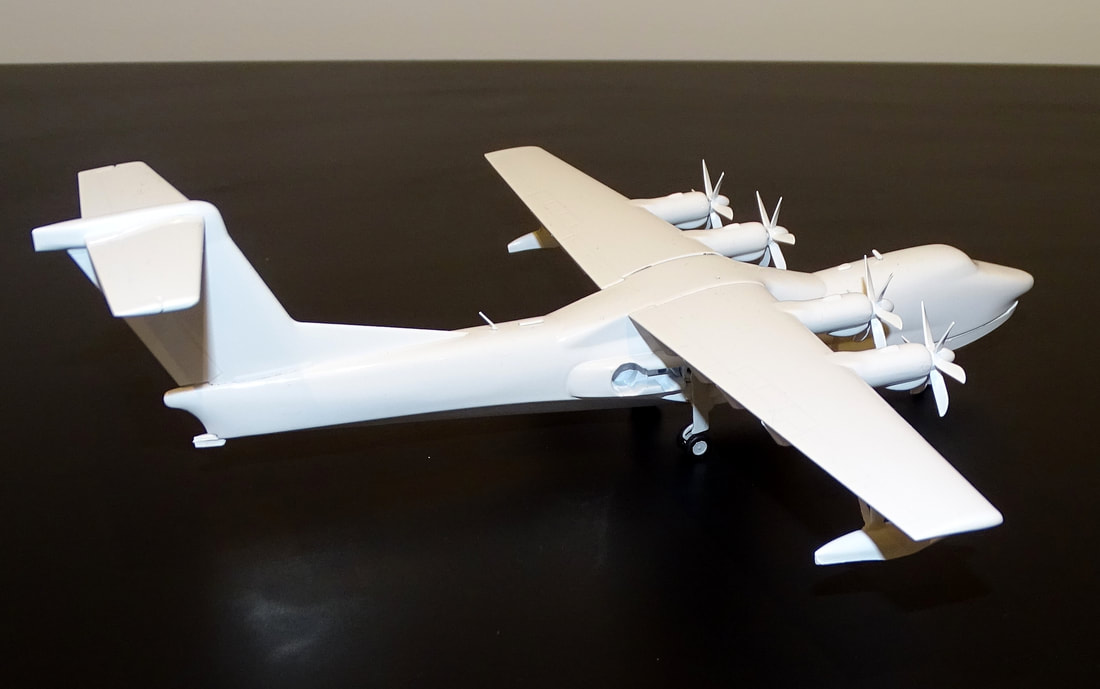 For those who are unaware of this aircraft it represents the third of China's key large aircraft projects (the other pair being the Y-20 transport and the C919 airliner) and is obviously very much a special-mission aircraft. What that mission is has been a little controversial. The most recent examples have been styled as firefighting aircraft, however since it is a large amphibian it could well also provide very useful service with the military. 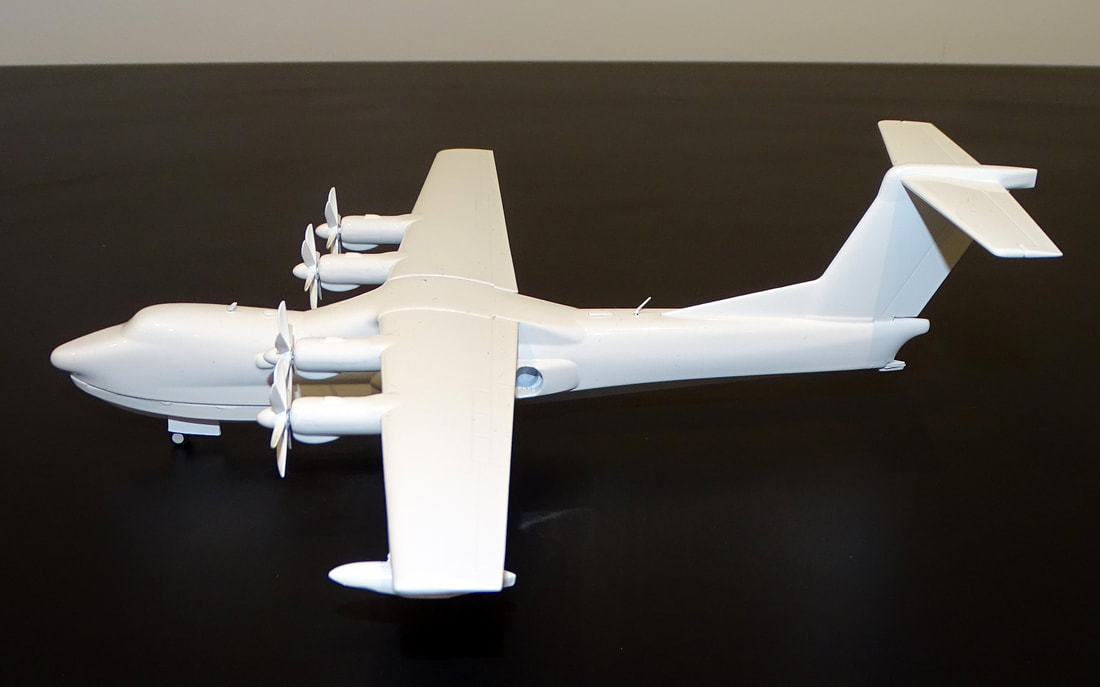 China has in the past decade been building up a series of militarised island outposts in the South China Sea as part of a ring of defensive installations, both creating a defensive barrier through which any attacking force would need to transit and also bullying its neighbours with its territorial claims. Some of these artificially enlarged islands are large enough to have airbases on them but others need to be supplied by ship. A seaplane with large transport capacity would be extremely useful for supplying these bases much faster than can be done by ship, or even for transporting troops between them - see this article from overtdefense.com. 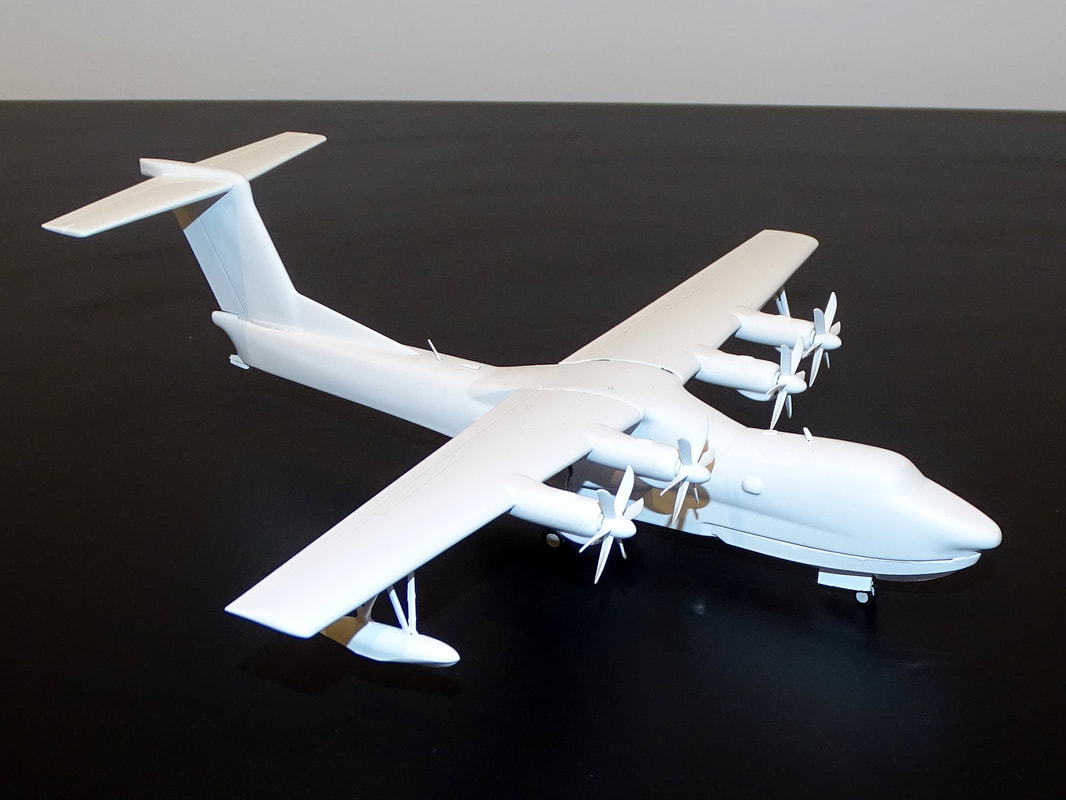 Regardless, at present it appears that 'natural disaster prevention' is the primary focus. The AG600 is named 'Kunlong' (Kun Dragon in English) and contains 100% domestic independent production and has incorporated a large number of new technologies. Not least among these is a hullform capable of withstanding high waves and suitable for sea voyages. As expected development has been protracted. 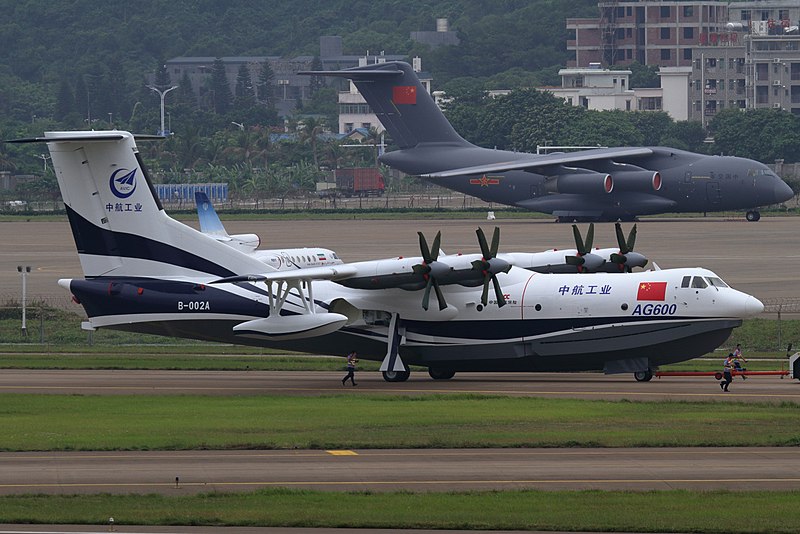 Alert5, CC BY-SA 4.0
Above: The original configuration of the AG600 had the cockpit further forward giving a very different look plus significant differences in the maingear and tail regions.
The original AG600 version of the aircraft first flew on December 24, 2017 - more than a year after rollout and about three years later than originally intended. On October 20, 2018 the first water take-off was achieved and on July 26, 2020 the first ocean take-off was successful. This has seemingly been still seen as the engineering phase of the project though and not the full production phase. 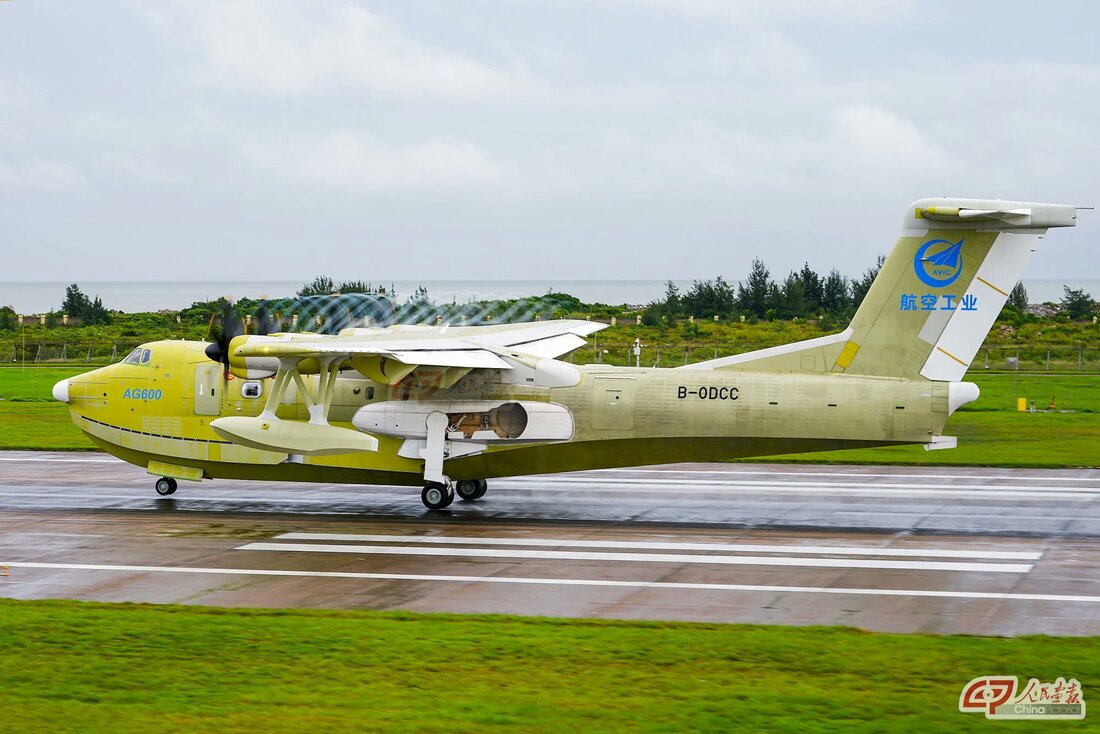 The design was obviously not finalised as the most recent version, the AG600M, has a new configuration with the cockpit moved back giving it a more traditional look. This new version of the aircraft made its first flight from Zhuhai on May 31, 2022. According to China's Global times:

"​The new firefighter variant of the AG600 that made first flight this time has a maximum take-off weight of 60 tons and a maximum water holding capacity of 12 tons. It fills the blank of domestic large firefighter aircraft. With a pressurized cabin, fly-by-wire control, integrated avionics and comprehensive task system, the aircraft is safer, can transport more water, has longer range, and has better potential for serialized development than the original demonstrator aircraft." 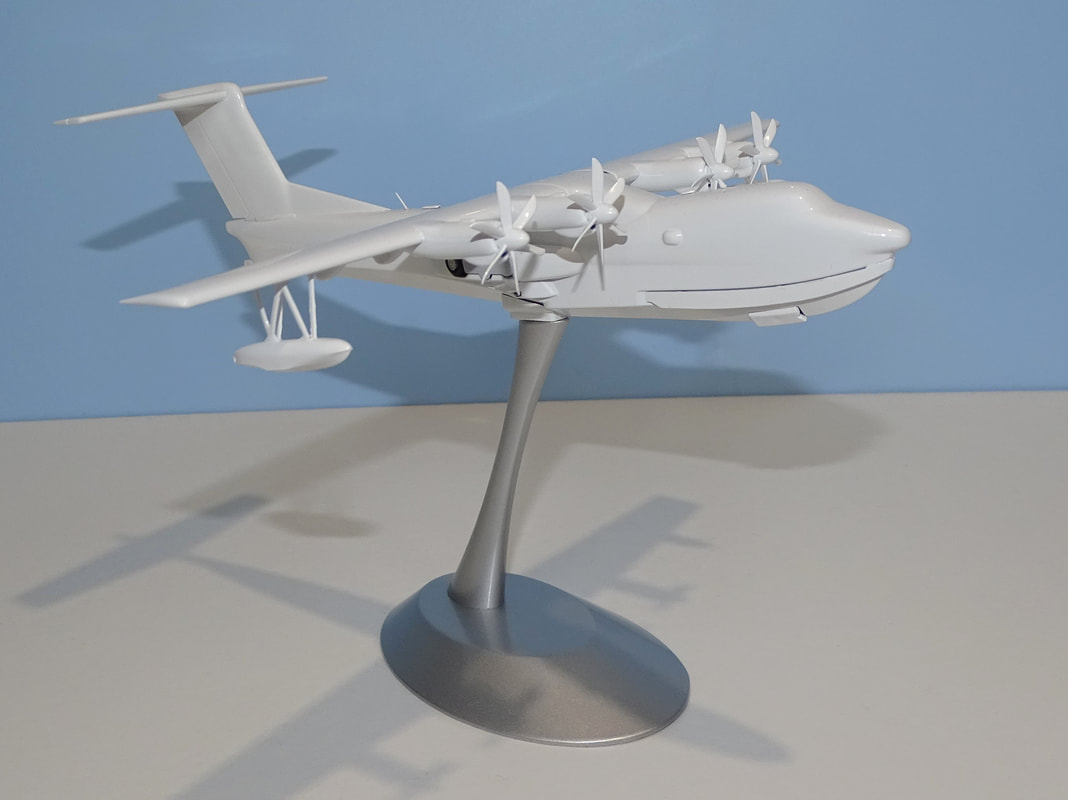 Testing continues, including the firefighting version collecting and dropping water, with service entry of that version expected in 2024, followed by the 'rescue' variant in 2025. 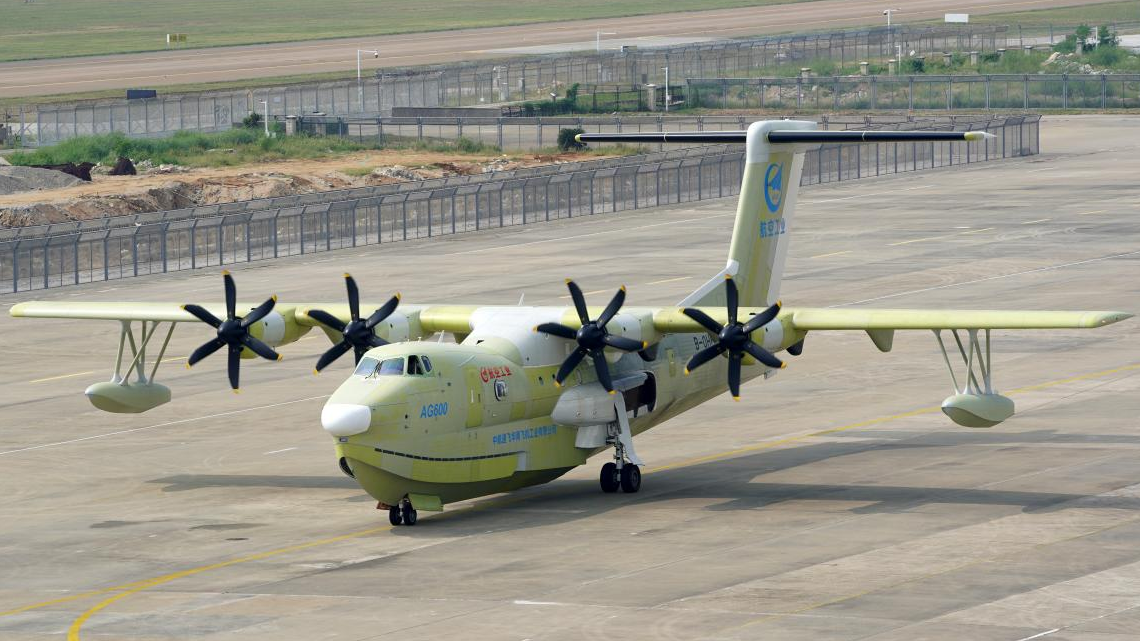 The AG600 amphibious aircraft has a single body flying boat fuselage, cantilevered high wings, four WJ-6 turboprops and tricycle retractable landing gear.​ ​It is developed for aerial firefighting, collecting 12 t (26,000 lb) of water in 20 seconds and transporting up to 370 t (820,000 lb) of water on a single tank of fuel (31 rotations), and search and rescue, retrieving up to 50 people at sea. 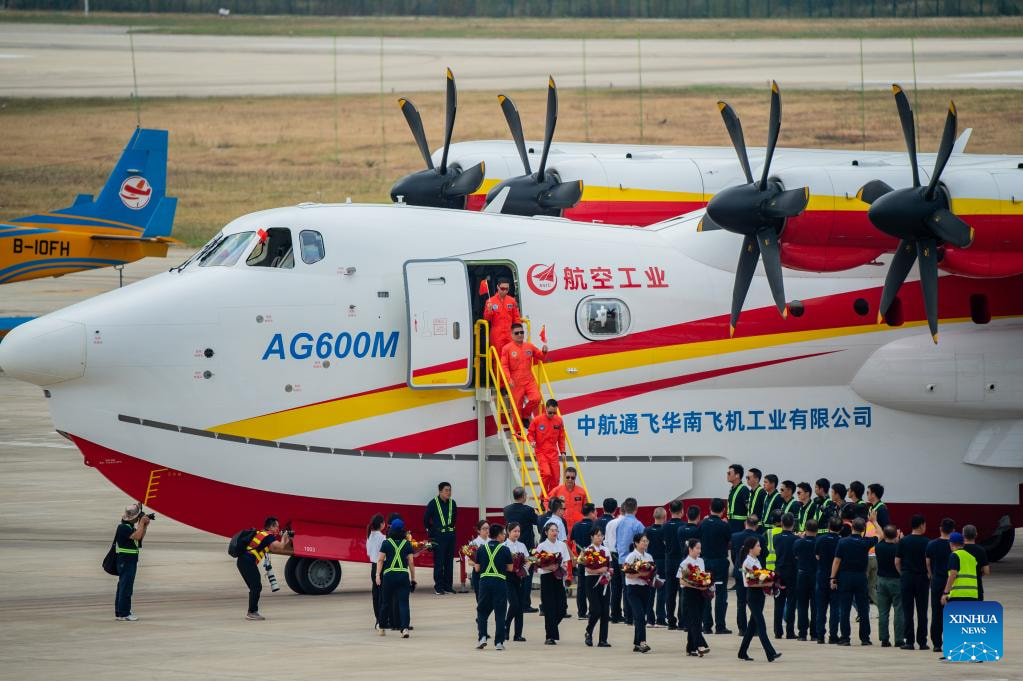 It is the largest amphibian that is likely to go into production (Russia's Beriev A-40 was substantially larger but only one prototype was made) but is dwarfed by previous seaplanes (most of which admittedly barely got into production too). 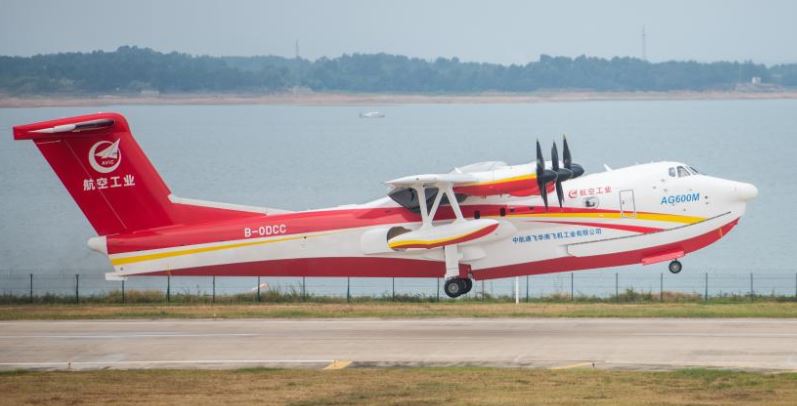 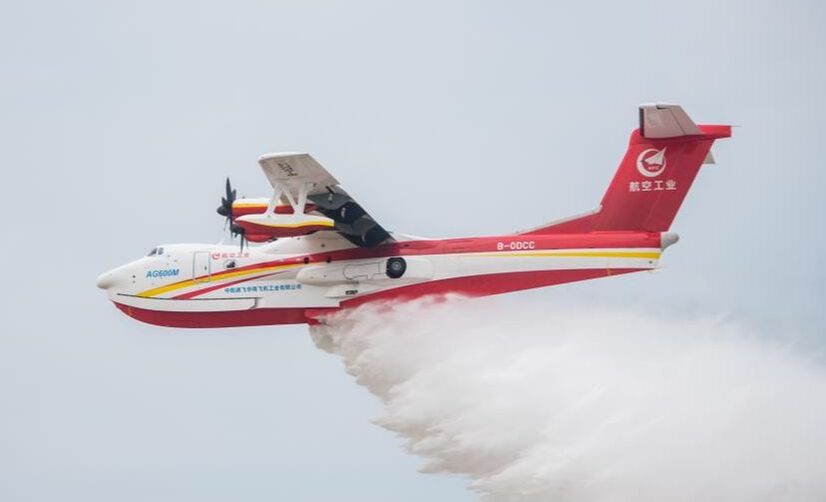 The overall shape of the mould is very impressive and to my eye matches the unusual shape of the real aircraft well. A lot of the detailing is very fine, which does open the mould up to easy damage and you can see with this sample one of the four float struts on the left wing has broken. 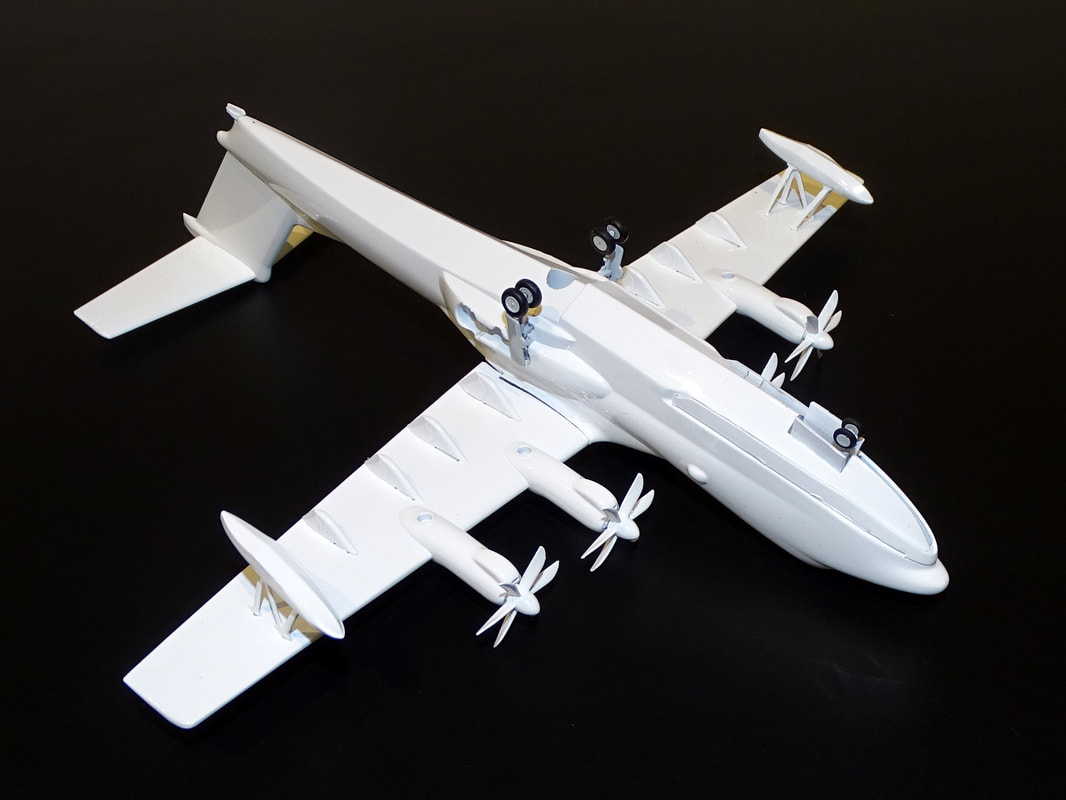 As you'd expect from a 200 scale mould the undercarriage is detachable but due to the configuration only the nosegear has magnets. The maingear attaches via pegs. The nosegear fitted very well but it was almost impossible to get the gear-up doors in place - I think perhaps the polarity of the magnets was opposing rather than attracting. They fitted in snugly by hand but I couldn't get it to stay properly. 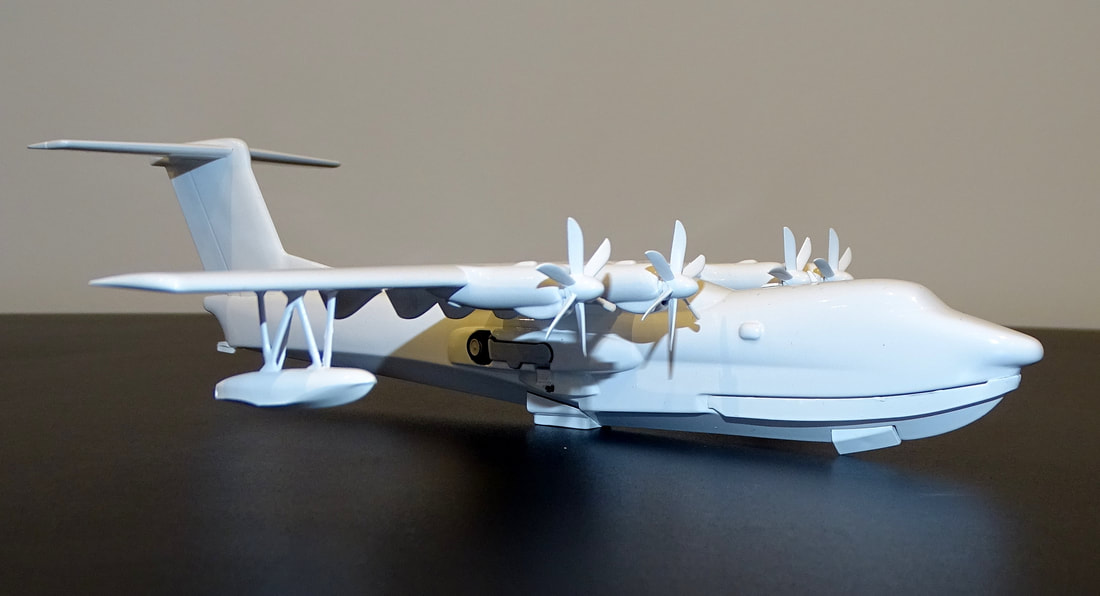 In gear-up mode the mould comes with an additional attachment that fits under the main fuselage so that the model will sit flat despite the keel. It is also useful when attaching to the stand: 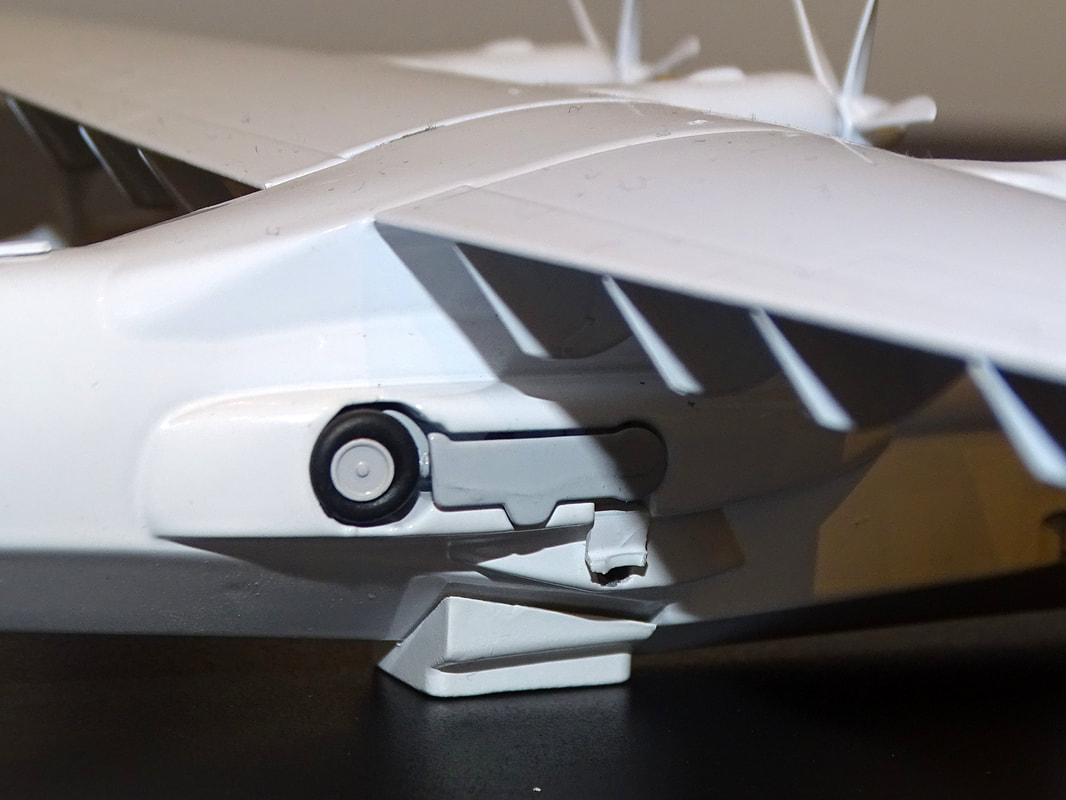 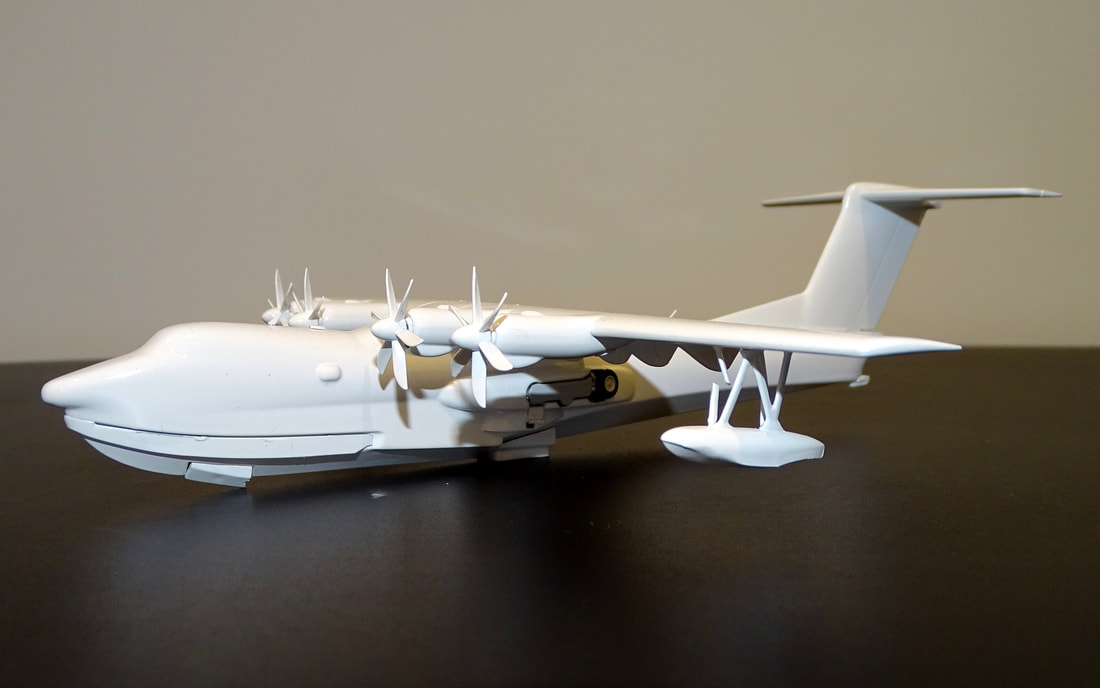 SUMMARY
Although something of a curiosity to Western aviation fans it is hardly surprising that NG are interested in highlighting the local Chinese aviation scene to its home audience and this is certainly an unusual and interesting aircraft. The mould looks superb and has a lot of nice detailing. If this could be down-sized to 400 scale I'd certainly be interested in it for my collection.