At the end of the 1970s Boeing was looking to meet the competition, provided by the then DC-9-80 of McDonnell Douglas, and improve its 737-200 Advanced model with a larger airframe which nonetheless shared cmmonality with its earlier 737s. The result was the 737-300 series which was ordered, in March 1981, by both USAir and Southwest Airlines. The most obvious external change was the replacement of the JT9Ds of the series 200s with new CFM56 engines which required a new engine pod with its characteristic flattenned bottom due to the low ground clearance of the 737 design. The series 300 first flew on January 17 1984 with first deliveries in November. The series 300 could seat a maximum of 149 passengers in a fuselage with a length of 33.4m. It was joined later by the smaller series 500 and longer series 400 - handled in other reviews.
The classic series 737s were good sellers for Boeing meeting the challenge faced by the MD-80 series. They were generally inferior to the later A320 and this eventually resulted in the Next Generation 737 series in the late 90s. The last aircraft was delivered to Air New Zealand in December 1999 after 1,988 had been built.

Within 1:400 scale the 737 Classic series had until recently been rather ignored, which is surprising given the number produced and the type's longevity. That has changed more recently with both Panda and Gemini / JC Wings using their moulds a little but there still remain many 737 Classics that deserve to be made in 1:400.

As of September 2021 in 1:400 scale there have been 208 B737-300s released. Although Aeroclassics came to the type late they have, as is often the case, been prolific however they lost access to the mould in the Panda bruhaha. Panda have continued to use the mould fairly regularly, often for retailer exclusives. Gemini Jets and JC Wings have also returned to using the 737-300 in recent years. 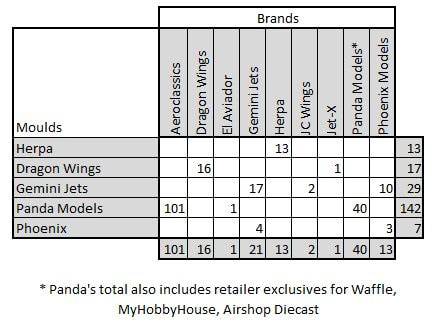 There are huge numbers of 737-300s that haven't been made or have only been made poorly. I have written the following wishlists so far: 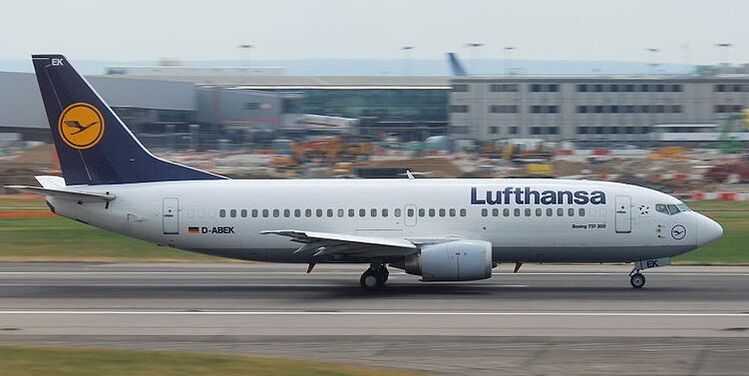 Herpa struck first with the 737-300 releasing a single model in 2000. As is typical for Herpa they have since released only 12 models between 2000 and 2009, plus one in 2016! I don't own any of their series 300 models however the earliest of their examples are ruined by very high and unrealistically long nosegear legs. The nose also appears a little pointy. Later models seem to be much improved with new nosegear legs and look like decent efforts. They share the usual issues with Herpa moulds - poor engine pylons and stabiliser fit.

You might think this mould can be totally ignored but Herpa have actually made some interesting models with it that nobody else has such as KD Avia, British World and even a Virgin Express example with winglets. You can see below the variability of the landing gear.
Dragon Wings / Jet-X (2000)

In 2000 Jet-X made a single AirCal 737-300 and this was followed by 16 Dragon Wings releases. The earliest Dragon releases suffered from an ugly elongated nosegear which you can see below on the New York Air example. This is made worse by the tiny nosegear tyre. Then again some suffer the opposite and have very large nosegear wheels like the Shuttle by United example below. About half however don't have the same level of nosegear problems and aren't bad attempts at a 737-300. The nose isn't quite pointy enough and the wheels are always too large but overall the later Frontier (see below photos), Ansett and KLM examples are good models. Releases tailed off in 2003.
The difference new landing gear and better cockpit printing make is evident between these two Dragon Frontier 737s. The early example on the left is vastly inferior to the later one on the right:

Gemini Jets (2004)
Gemini produced their first 737-300 (a Deltaflot example) in 2004 and then dribbled out releases at a disappointingly slow rate of 14 in 10 years! Phoenix, who were production partners for Gemini at the time, also used this mould 9 times between 2004 and 2009 for 3 Air Asia, 3 PIA, 2 Ansett and 1 Varig releases. Following the 2014 Lufthansa release Gemini switched to the Phoenix mould (see later), which had a winglet equipped version, for four releases up to 2016. They have recently returned to using this mould in 2019 (as has their production partner JC Wings) and a further five models have been released.
I'm not sure why Gemini used the mould so infrequently as it was perfectly presentable for the 2000s, though not perfect. Gemini always struggle to get their 737 noses correct and the series 300 shares some of the faults of their series 200 in that the nose is a little bit too long and duck-shaped. The wing seam join is also clunky and obvious compared to the Dragon Wings example.

For the moulds reappearance in 2019 it was equipped with aerials, which as is often the case with JC Wings modified moulds are too large. The most recent releases have been ok but the mould does have a tendency to sit taildown rather and combined with bad cockpit printing the United Saul Bass large titles version was a mess. I reviewed this model here:
Tulip Trouble: United Airlines Boeing 737-322 N327UA by Gemini Jets

Aeroclassics / Panda Models  (2013)
Despite the type's popularity in the real world it took until 2013 for someone to get serious about the 737-300 and that someone appeared to be Aeroclassics (some models are released under the Blue Box brand). In actuality Aeroclassics was not the owner of the mould. It is actually owned by Kang Kai - the people behind Panda Models. Unsurprisingly when Aeroclassics and the Panda owners fell out in 2015 this mould was a casualty. Aeroclassics continued to release models on it for a while (into 2017) but eventually ran out of blanks and the mould is nowadays only used by Panda Models. For some background on this unsavoury affair see:
Panda Models Pt1: The Story So Far May 2016
Aeroclassics used the mould an impressive 101 times for a wide variety of excellent 737-300s. Below is a selection of the Aeroclassics releases:
The mould is excellent and the only criticism I can make is that perhaps the nosegear is a tiny bit long. I have reviewed models using it a few times:
Yorkshire LCC: Jet2 Boeing 737-377 G-CELS by Panda Models
Enter the Classic: Boeing House Colours 737-3B7 N73700 by Panda Models
Panda Models first began to use the mould mainly for Chinese 737-300s, often made for their partner at the time Skywings. In 2017 they upgraded the mould with aerials and in 2021 they have also upgraded the landing gear with proper gearhubs. The mould has been used by several of Pandas partner retailers for exclusives including El Aviador, Waffle Collectibles, Airshop Diecast and MyHobbyHouse. I have reviewed a recent example here:
Aviateca | Boeing 737-3Q8 | TG-AMA | El Aviador
Below are some of the latest editions with upgraded landing gear:
Phoenix / Gemini Jets 2 (2014)
Sadly we have to save the worst till last as Phoenix produced a new 737-300 mould which is truly awful. I'm really not sure what they are thinking. Most of the problems stem from ahead of the wing. The nose is way too long, cockpit angle incorrect and I'm not sure what's going on with the position of the nosegear. It of course doesn't help that Phoenix can't print 737 cockpits level.  Gemini Jets also began to use this mould, probably because a version of it comes with winglets, but have thankfully reverted back to their original. In my opinion this is a poorer mould than the old Gemini version. At least Phoenix barely use it. 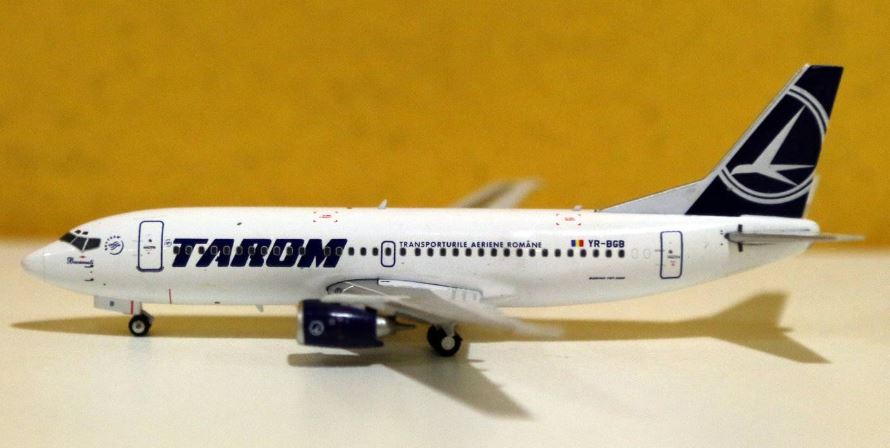