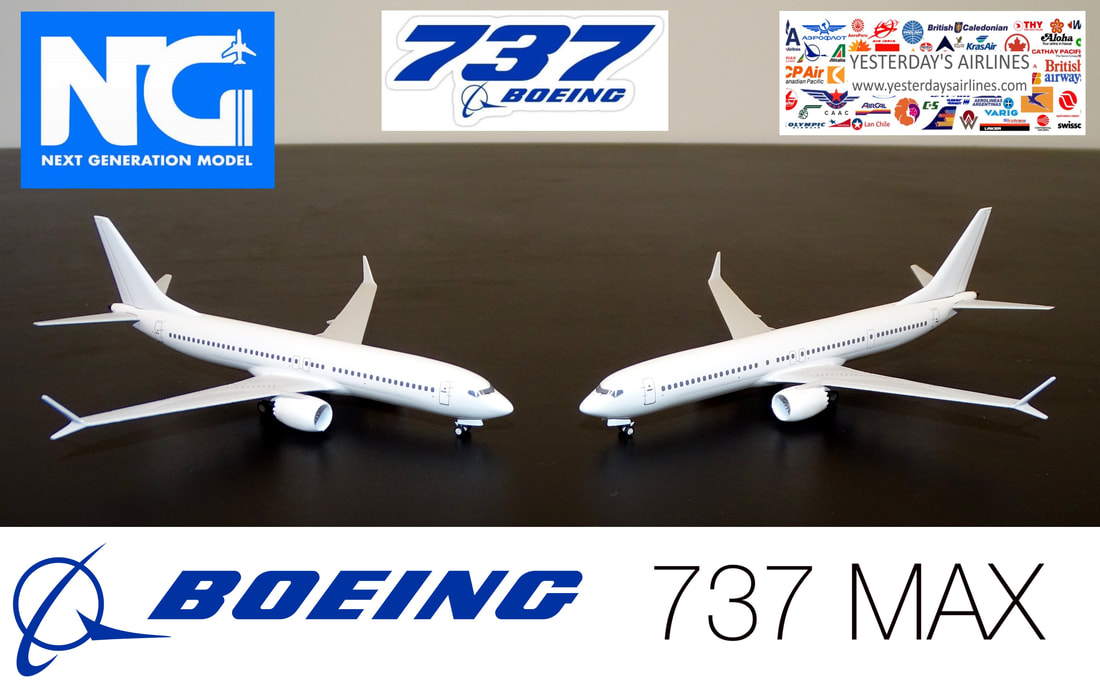 The MAX has had a service entry to rival the original De Havilland Comet and the McDonnell Douglas DC-10, however Boeing appears to gradually get back on track now. It is clearing the huge backlog of finished aircraft undelivered since the type's grounding and picking up new orders as well. It still isn't all plain sailing though, with certification of the MAX-7 and MAX-10 variants heavily delayed and the type being used as a political chess piece by Chinese auhtorities. Indeed, with much of the undelivered built backlog being for Chinese customers Boeing is having to begin to repurpose the aircraft for non-Chinese airlines. 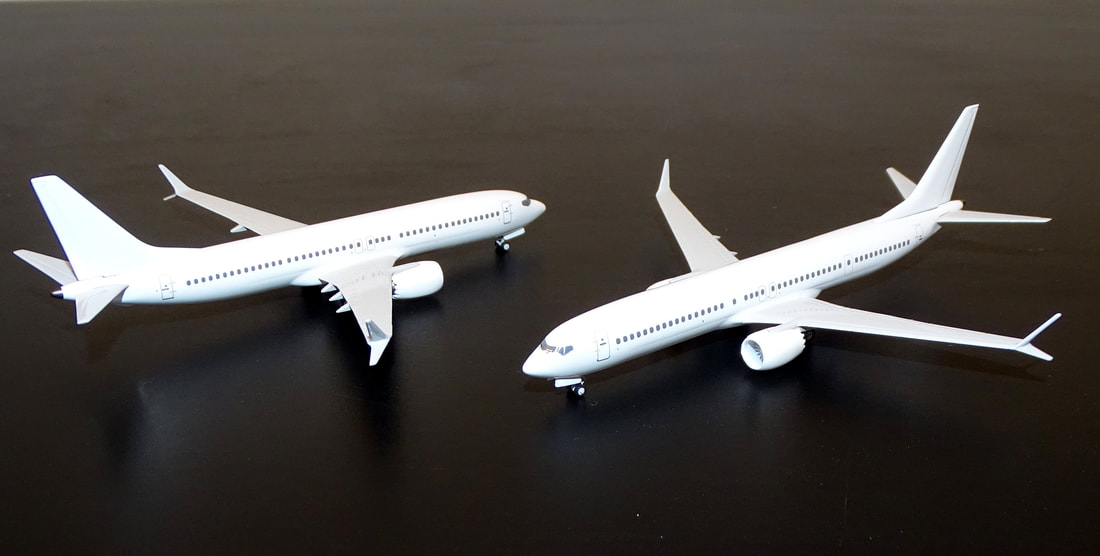 So, while the MAX family may not be totally out of the woods it appears certain that in the next few decades it will be almost impossible to avoid flying on one of the type, especially if you are in the USA. This alone is more than enough of a reason to warrant the creation of yet another MAX mould in 400 scale to join the four existing versions.

NG Models actually announced the MAX series back in May but it hasn't been until December that completed samples have been sent to me at Yesterday's Airlines. With these NG Models effectively completes the in service 737 and A320 families with only the pre-NG versions and A320-100 yet to see the light of day. That also means that NG now has an impressive slate of modern airliners with which to go head to head with Phoenix, Gemini and JC Wings. Only the 747-8, 777-8/9 and A330-800/900 are now missing, with at least the former scheduled to surely debut in 2023. Despite my classics leanings it is hard to disagree with this strategy.

I have recently discussed the MAX in 400 scale in some detail in my recent mould review so check that out for the details:
Boeing 737 MAX Mould Review
Broadly there are 4 existing moulds. The Panda mould, although excellent, is no longer available for use, which leaves mediocre versions, from Phoenix and Aeroclassics, and one good mould, from JC Wings / Gemini Jets. 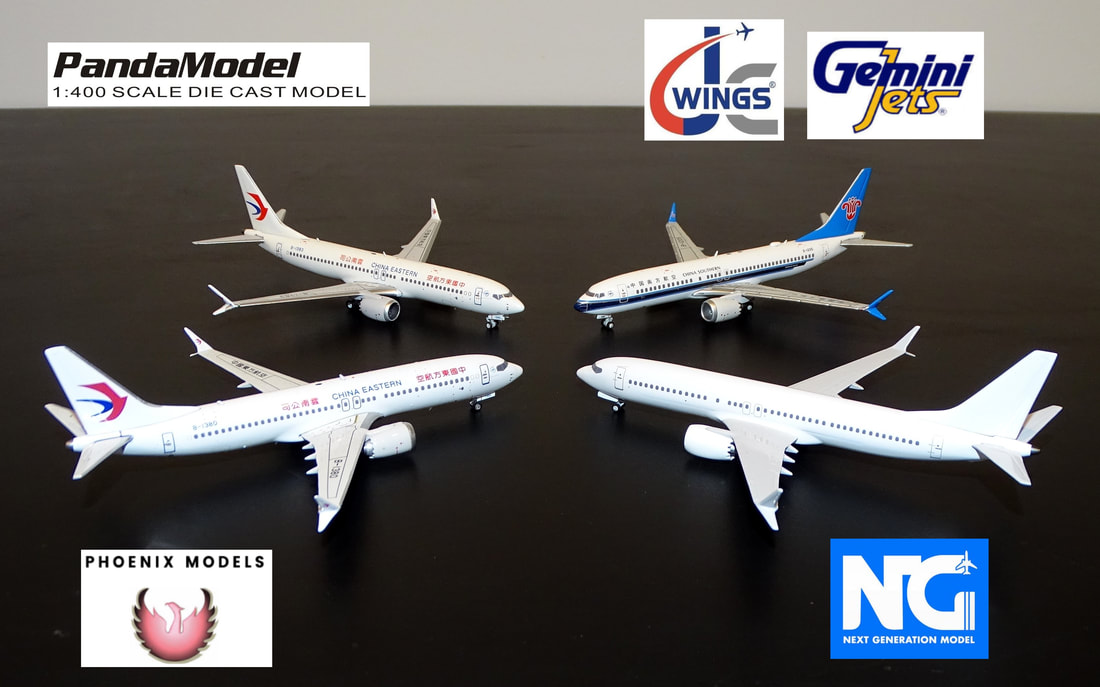 Despite massive cancellations for the type in 2019 and 2020 of well over 600 aircraft the MAX continues to sell relatively well with nearly 900 new orders in 2021/22. That leaves over 5,300 aircraft on order with just over 950 delivered. This admittedly pales in comparison to the A320neo family with over 8,600 aircraft ordered but that is partly due to the special capabilities of the latest A321 versions.

The result is that any 400 scale manufacturer can be confident they will have almost endless livery release options for the next twenty years or so, especially given the prevalence of special colour schemes in service nowadays. The MAX-8 has by far the lion's share of defined orders (well over 2,000) with the MAX-9 trailing way behind at only around 260. This doesn't however take into account over 1,500 orders where the variant has not been yet decided.

The only wrinkle, as mentioned earlier, is whether the MAX will eventually be recertified in China where deliveries have come to a standstill and aircraft delivered to Air China, China Eastern, China Southern, Hainan Airlines, Shandong Airlines, Shenzhen Airlines and Xiamen Air remain grounded. Surely they can't do without the MAX in the future?

NG have delivered to me sample moulds for both the MAX-8 and MAX-9, which should be basically identical aside from their lengths. They aren't quite, which is a little annoying.

NOSE & NOSEGEAR
The difference between them is the height of the nosegear. The MAX has the slightly lengthened nosegear leg to give sufficient engine ground clearance and it really is rather noticeable when you see the aircraft compared to the NG versions. Below is the first MAX I ever saw in person at Guangzhou in December 2018. The gear height really stood out to me: 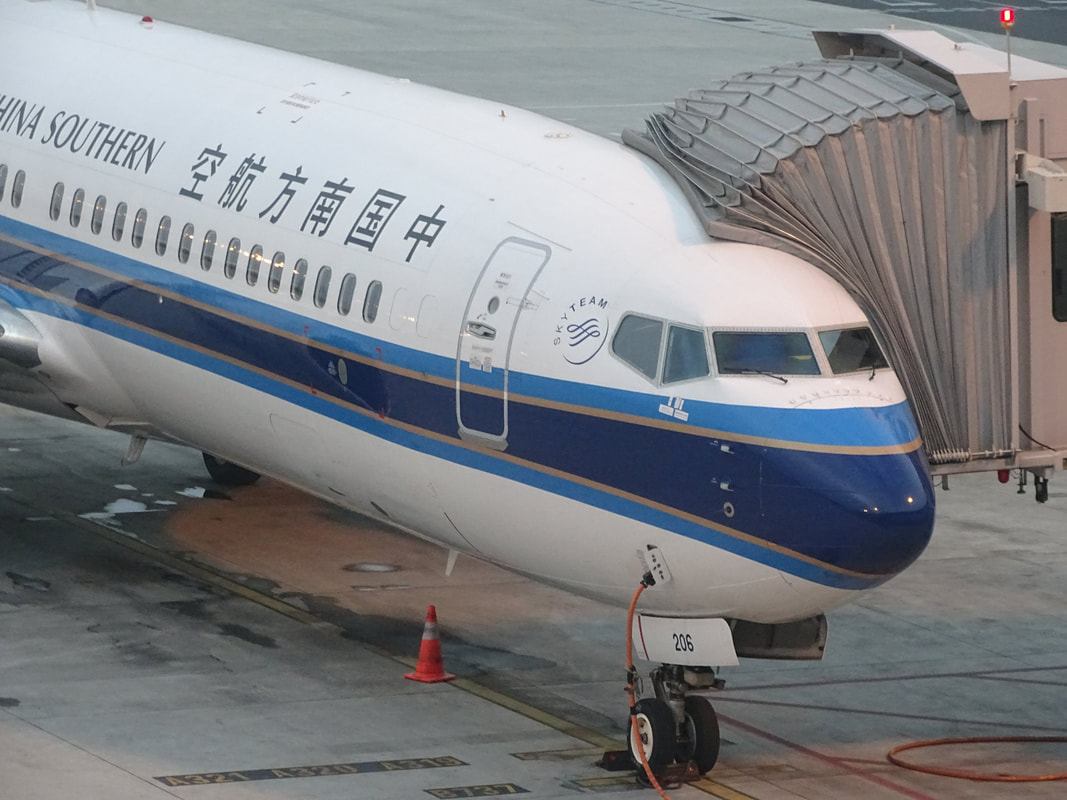 Nosegear height on 737s has been a recurring issue with 400 scale versions for years. Some 737NG moulds have way too big nosegear doors and others get the gear leg all wrong anyway. NG themselves had had some issues with the nosegear height. The mould for their 737-800 was modified to fix this issue but at times QC problems have meant that the height of the nosegear has been quite variable and looked rather MAX-like.

The rest of the nose region matches the already excellent 737NG and so there is nothing to say about it other than it is near perfect.
ENGINES & PYLONS 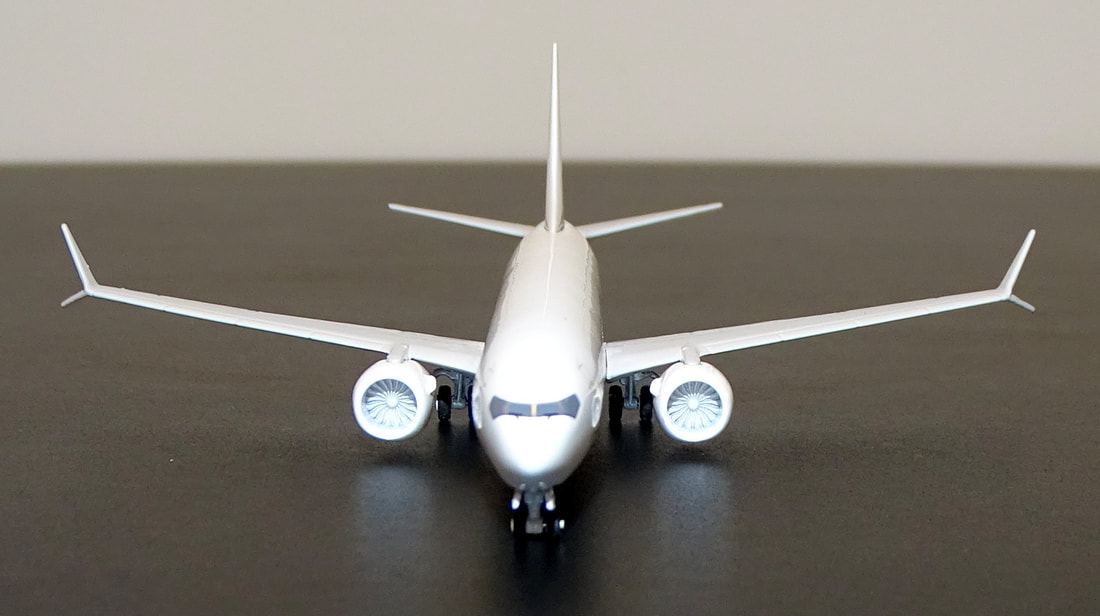 There's plenty to like amidships on the samples. The engine pylons are great and the engines accurately significantly chunkier than on the NG versions. The only criticism is that the nacelle chevrons are a little squared off and poorly finished in places. The maingear reuses that of the NG version.
In keeping with recent decisions from NG Models around the fanblades of their larger moulds like the 777 the engines are solid core. Phoenix have hollow core engines but I personally prefer the solid versions detailing and on such a small engines hollow core seems rather pointless. 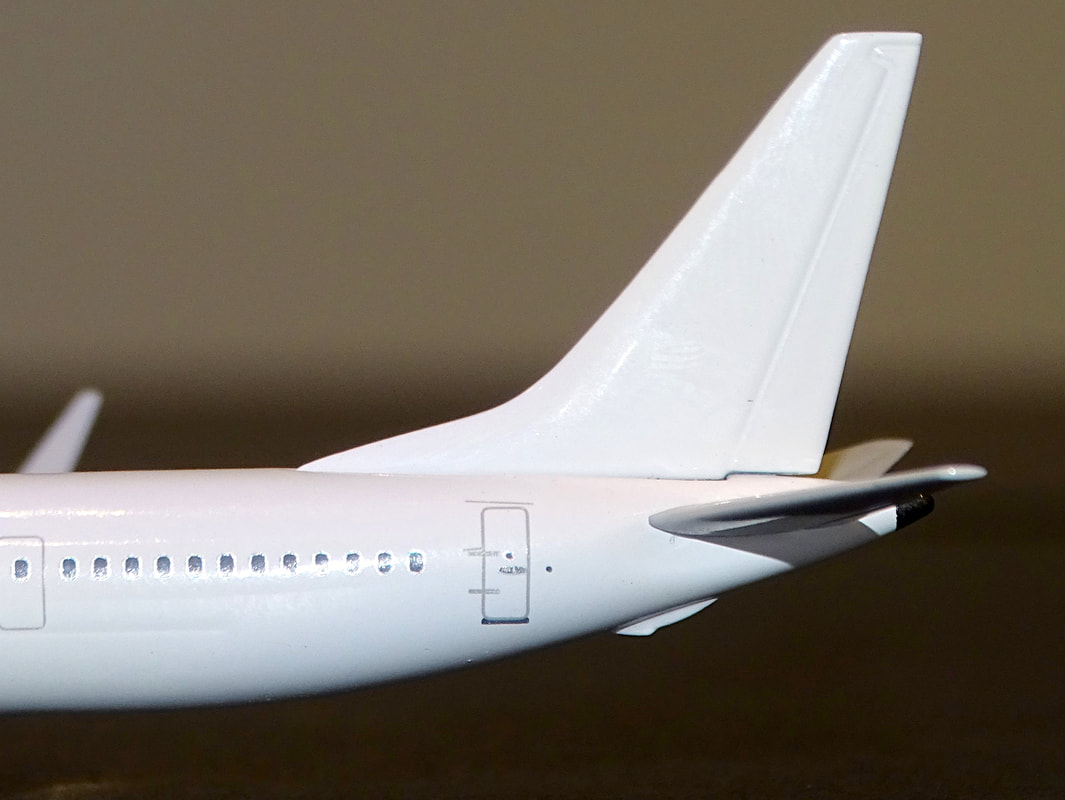 The recontoured tailcone of the MAX is longer and pointier than the NG tailcone. It is another area I dislike on the Phoenix MAX mould, where it is chunky and short, but the other moulds all get it right. NG don't have any issues with it either. The vertical stabiliser is once again a reuse of that from the 737NG moulds.
UNDERSIDE
One aspect the MAX moulds have in common with their 737NG brothers, which is perhaps not ideal is the lack of a standhole. I'm not sure why that is as the A320s have standholes. It doesn't bother me as I don't mount such small aircraft on stands, however it is a curious omission. 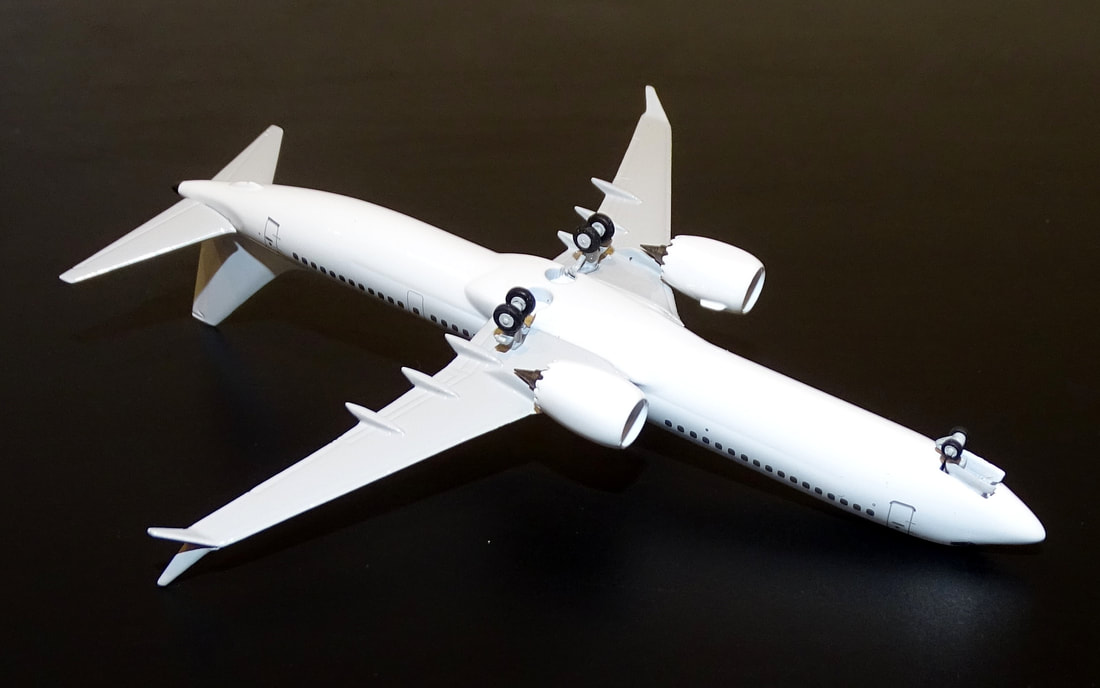 Considering the quality of the NG Models 737 Next Generation moulds you would surely expect excellence from these MAX versions. They don't disappoint except in the length of the nosegear leg. It is definitely shorter than the legs on both the Panda and JC Wings / Gemini Jets versions and looks too short against the real thing. Aside from that these are once again fabulous moulds and as I understand it they will be in production early in the new year. 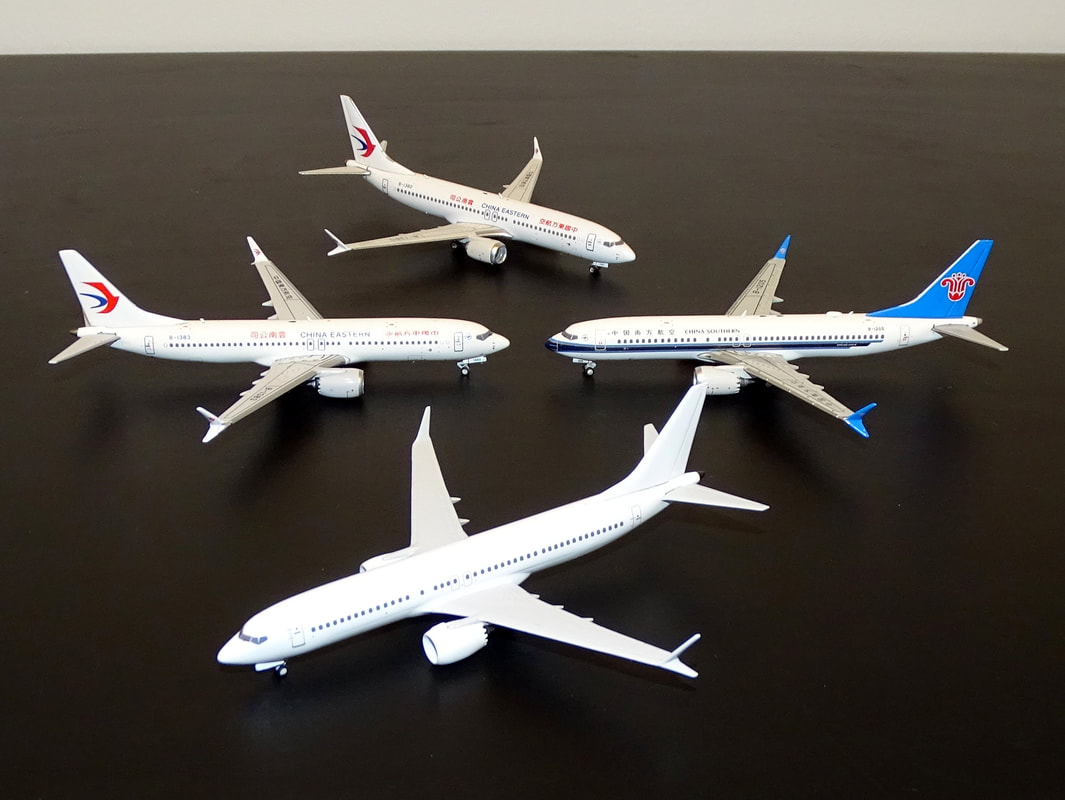