One of the fringe benefits of manufacturing aircraft is that if you need a special plane then you can just build it. This is exactly what Airbus did with their original Airbus Beluga (based on the A300) and has now done again with the new Beluga XL (based on the larger A330). The original Belugas are not only reaching the end of their service lives but are proving too small for Airbus' ramped up production of A320, A330 and A350s.

Being based on the A330 the Beluga XL has 30% more capacity than the original Beluga. It is in fact a hybrid of the three major ceo variants of the A330 with the rear of an A330-300, front of an A330-200 and reinforced floor and structure from the A330-200F. Obviously the structural and design changes between this and a standard A330 are massive to enable the huge unpressurised cargo hold that sits atop the lower fuselage.

Five aircraft are scheduled to be built with the first flying for the first time on July 19, 2018. 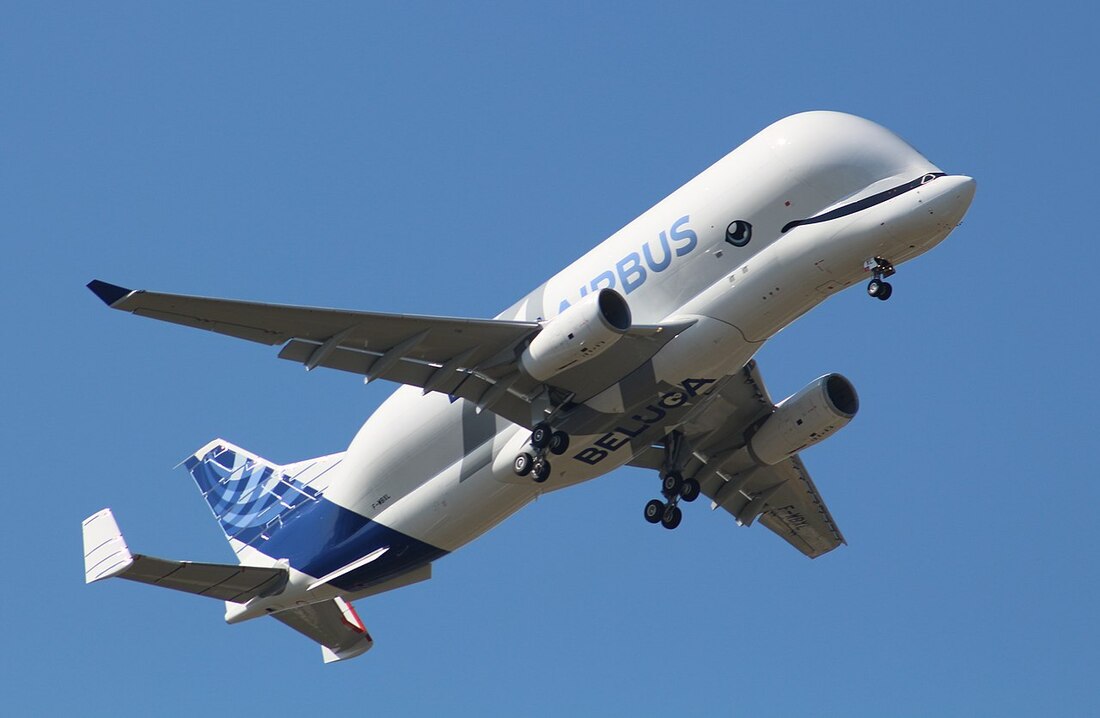 In 1:400 scale these sort of one-off Airbus models have traditionally been made by Dragon Wings, who had a contract with Airbus for many years for house colours models. Depending on your viewpoint it is unfortunate or fortunate that Dragon has seemingly given up entirely with civil airliners nowadays so although they did make a decent enough A300 Beluga it is unlikely that they will be making a Beluga XL.
It doesn't really matter as two other manufacturers have stepped up to the mark for this niche type - NG Models and JC Wings. The appearance of two let alone one mould was something of a surprise but both manufacturers appear keen to get their money's worth out of it and sales appear to have been pretty decent.
Three aircraft are in service now and both manufacturers are in the process of producing the third after making the first pair, albeit not always with the same registrations. JC Wings has gone one further and also produced the prototype in its primer colours.

The Beluga XL Moulds In Detail

For a standard A330 the NG Models mould beats the JC Wings version without too much trouble but the Beluga XL is so different that this isn't necessarily the case with here. As per usual I will score each section out of 5 and then tally the scores up at the end to see which gets the highest.

In the review below the blank models are the NG and the one in primer green is the JC Wings.

JC Wings A330 Beluga XL
NOSE / NOSEGEAR
What is impressive is how accurate both moulds get the bizarre low slung cockpit region and the shape of the huge cargo doors above it. Holding both up against photos of the real aircraft shows that they are almost exactly the same as each other and the 1:1 version.

​This is not the same when it comes to the nosegear. The JC Wings A330 has had positional and height issues with its nosegear and just as these carried across to the A330 Freighter version it is the same here. The nosegear on the JC Wings edition is nearly 2mm further back than on the NG edition. The difference is not drastic but comparing its relative position to the cargo door the NG is more correct. In addition, the JC nosegear is shorter with almost no distance between the gear door and tyre. The NG nosegear is better in both regards.

Unusually for a modern mould the JC Wings engines are solid core while the NG Models are not. The solid engines are ok but the NG version are a definite step up. It is also reasonably clear from above that the dihedral on the JC mould is greater than that on the NG version.

MAINGEAR
Each manufacturer has taken a different route with the maingear. The general shape of both sets is good, however JC Wings have opted for moveable gear trucks, which necessitates less detail, and NG Models have gone for static trucks allowing for a lot more gear leg detailing. The NG looks better but the JC has more 'play value'.

REAR FUSELAGE & STABILISERS
Both moulds have the rear fuselage essentially correct in its general shape and form but this is also the area of the moulds that, aside from the undercarriage, differs the most. The differences are centred around two areas - the tailcone and the uprights attached to the end of the horizontal stabilisers.
The tailcone of the NG mould is flat to the wedge shaped fin that sits atop it whereas on the JC Wings model the tailcone protrudes some distance beyond the wedge fin. Interestingly I don't think either is correct. The NG is too short and not quite distinctive enough from the wedge fin. The JC Wings is too long. 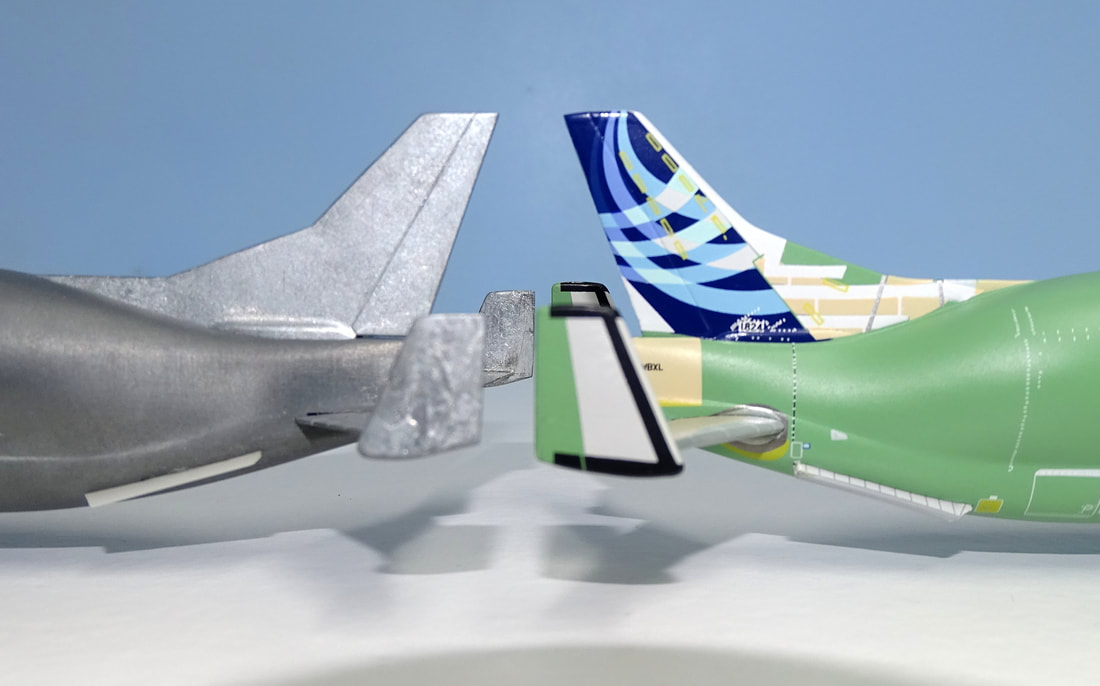 The difference in size of the extra stabilisers is quite large
The extra stabilisers attached to the horizontal stabiliser are an area of even greater disparity. They are 1.2mm tall on the NG and 1.4mm tall on the JC Wings. The latter's do not angle upwards as much as the former's on their lower side either so are actually quite a bit larger. I believe it is the NG Models mould that has the correct size and shape here.
MAIN CARGO DOOR
The shape of both moulds main cargo door is excellent and it has a tight fit to the separate main fuselage. Of course the greatest difference between the moulds is that the cargo door on the NG version is static and closed whereas the JC Wings version has both closed and open options. I am surprised that NG didn't also take this opportunity when making the model as their cargo door is a separate attached piece, but it is a big win for the JC Wings variant and a wonderful feature. 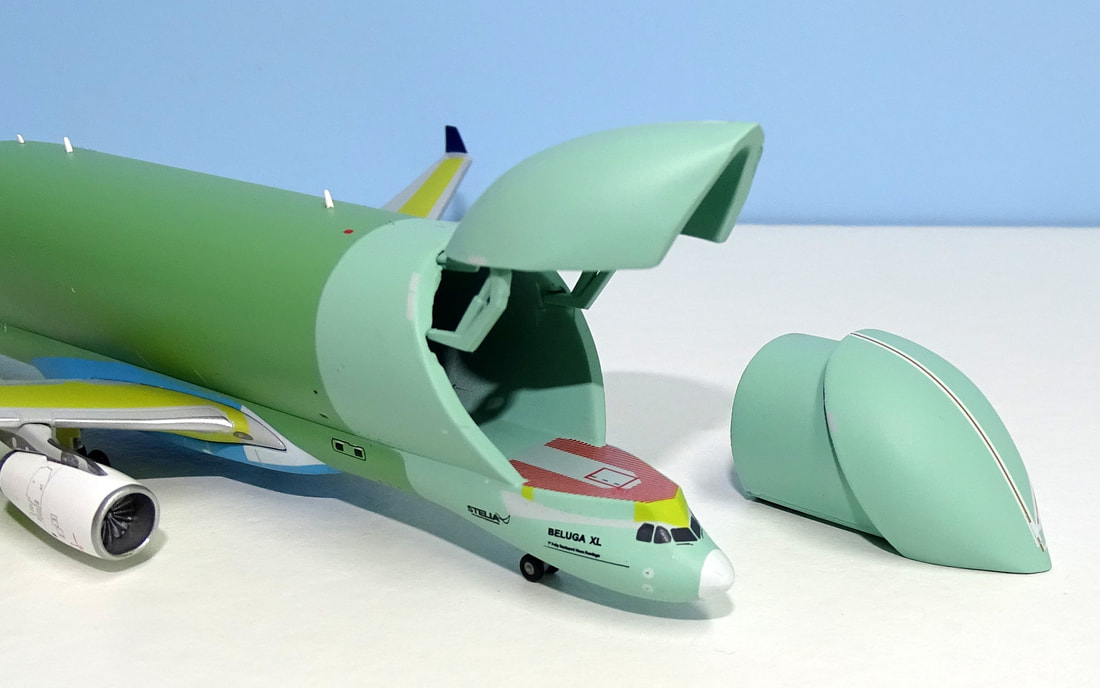 The closed version of the JC door is die-cast metal while the open version is plastic. There is excellent printing detail on the exposed fuselage and the plastic open door attaches nicely in four places replicating the actual hinges of the real thing. It is a triumph of modern 400 scale and another example of how a few of the manufacturers are really pushing the envelope as to what can be done at this scale.