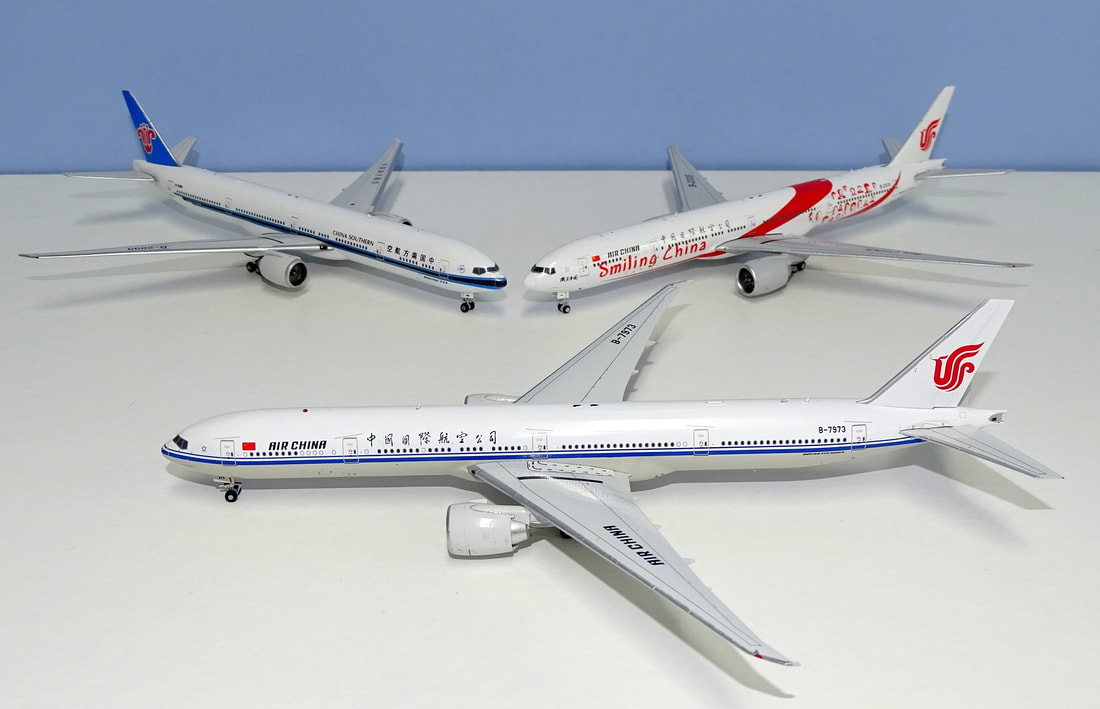 Even though the aircraft itself is approaching the final third of its service life the Boeing 777-300ER remains one of the most important types in 1:400 scale for the major manufacturers. Competition is still strong, especially as Aviation400 recently produced a new 77W mould in late 2019. That brings to four the number of moulds still in regular use in 2020, although frankly the cradle mount Gemini Jets mould is so far behind the other three as to be easily discounted. Accordingly I won't include it in this detailed review of the type.
The moulds to be compared in this detailed comparison will be the following:
​All models are from my collection.

AVIATION400
The review will take the form of a comparison of various areas of each mould to the real aircraft, with a score out of 5 alotted for each mould for each area. Adding the combined scores together gives you the winner. Since all 3 of these moulds are good this is going to be a tough competition.

​NOSE / NOSEGEAR
NOSE: All three of these moulds have good forward fuselage shapes and are very convincing 777s. The Phoenix mould looks the weakest of the three but it is hard to say how much this is due to the cockpit window printing. This is a better Phoenix cockpit than many but still is much inferior to the other two models. The shape of the JC Wings and AV400 nose and cockpit regions are near perfect.
NOSEGEAR: I hadn't realised how tall the nosegear on a 777 was but presumably the Philippines example above is lightly loaded too. The Phoenix landing gear is a little too short and not as nicely detailed as the other two. The JC Wings gear has an accurate height but is not as detailed as that of the AV400 mould. This is most obvious with the two forward prongs. On the AV400 example they have the extra detail of the triangular box that sits atop them, which is missing on the JC mould. The Phoenix has better wheelhubs than the JC but the AV400 has the best hubs too. Lastly colourwise the Phoenix is too silvery, the JC too grey and the AV400 the best, if still inaccurate, colouring.
ENGINES & PYLONS / MAINGEAR
ENGINES & PYLONS: The Phoenix mould has been criticised for the smaller size of its engines and they are distinctly smaller than on the other two moulds. I spent some time holding the models up against a photo of the real thing and I do think the Phoenix engines are a little too small, but not massively so. All three have decent engine exhausts. The shape of the engine pylons is best on the JC mould. On the Phoenix they are not deep enough under the wing and on the AV400 they are too deep and close to the engine exhaust. Both the Phoenix and JC Wings pylons hold the engines correctly a bit higher than the AV400 also.
MAINGEAR: All three moulds have maingear bogies that move up and down around the central tyre, which is a nice feature.  All three look good but the Phoenix tyrehubs are probably the best looking. The shape of the Phoenix gear doors is however inaccurate along its rear margin, which is essentially straight when it ought to have a notch at the lower end. This is present on the  JC Wings mould although the light grey is a little offputting. The AV400 maingear doors are a little too short, but are the right shape, and show off too much of the gear leg itself. From the front (see below) the JC maingear correctly angle ever so slightly inwards as well.
ENGINE INNERS​
ENGINE INNERS: The Phoenix mould was made well before see through engines were introduced in 400 scale and so has solid inners. The detailing of this area is not great. The JC Wings has see through engines, with quite thick fanblades. The AV400 mould has very thin blades, which successfully trick the eye into thinking the black areas are blades and not empty space. It also has better detailing on the fanhub. It is arguable which look is more accurate, thicker blades or thinner ones, and even arguable whether see through engines are worth it. In this case I think AV400 edges it.
TAIL & TAILCONE
TAIL & TAILCONE: One of, if not the most, recognisable parts of a 777 is the tailcone with APU exhaust on the left. The older Phoenix mould goes for a simple wedge shape with none of the finer detail. JC Wings has a very nice shape with an actual hole for the exhaust. Everything is well proportioned. The AV400 mould has tried to produce a detailed APU also but hasn't got the shape quite right and has noticeably larger upper and lower lips than on the JC. They are too large. The tailshape of all three is good but the Phoenix has a large attachment point the whole width of the tail. Both JC and AV400 attach the tail forward of the rudder only giving the look of a moveable rudder surface not attached to the fuselage.

FUSELAGE DETAILING
The aerials on the Phoenix mould are all rather square and don't taper correctly as they should and do on the other two moulds. The Phoenix mould does however mould in the rear fuselage roof bump, which is only printed on the JC Wings mould. The AV400 mould goes all out and moulds in all 3 bumps on the roofline and adds navigation beacons above and below. 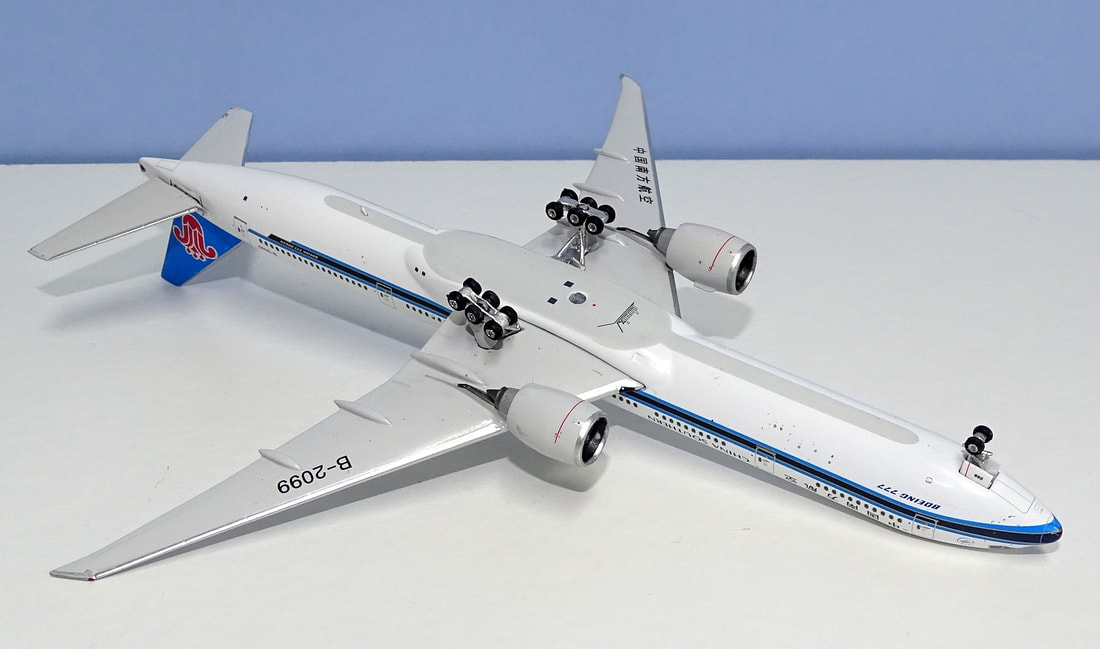 Although I admit it isn't a mould detail as you can see printing detail is lacklustre on the Phoenix model compared to the other two. The JC Wings has slightly stronger and more detailed printing than the AV400. This matches my general experience of the brands. Phoenix always has weaker printing detail whilst JC Wings and NG Models are the market leaders in this aspect. Note that the AV400 mould rear underside aerial has lovely striping detail also. 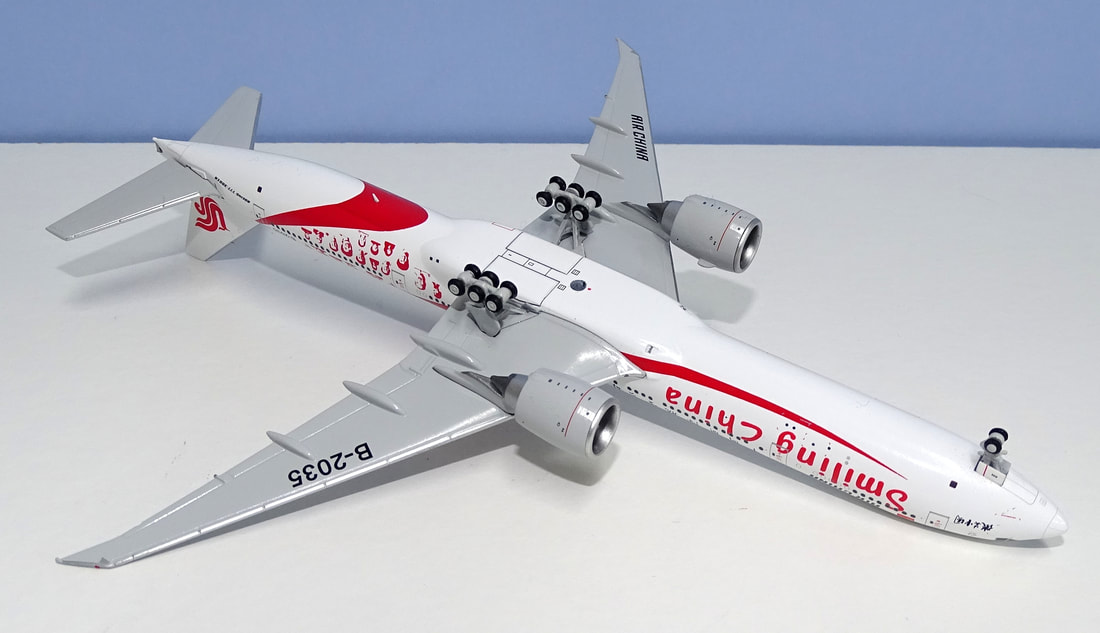 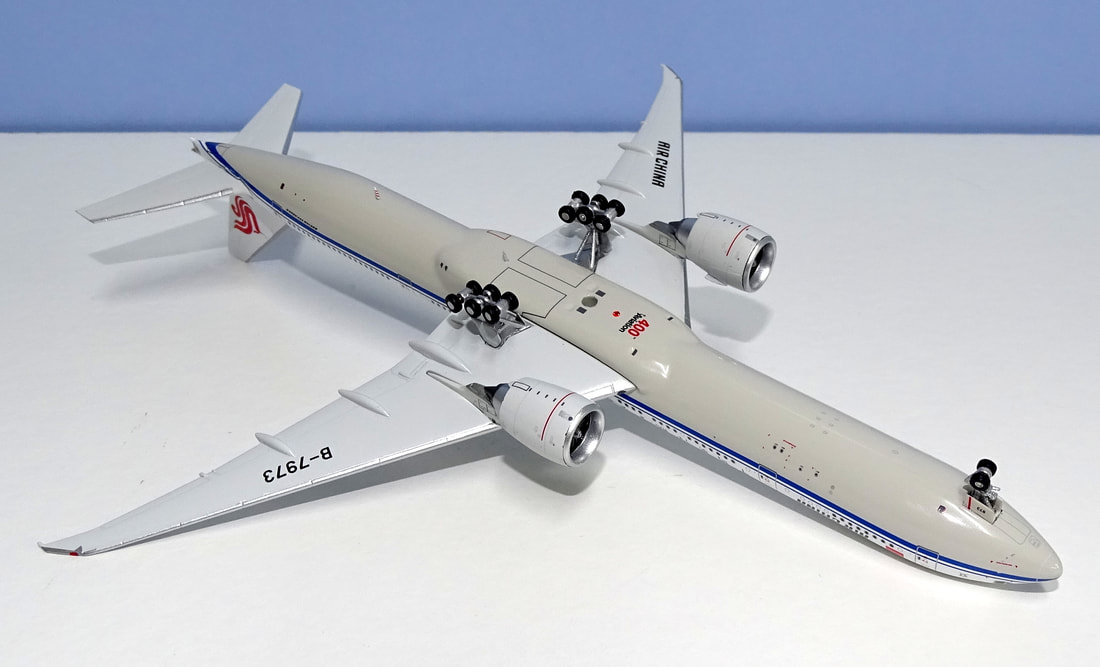 In summary I think I can say that while the Phoenix 777 is still a good mould, in comparison to the new competition it lags someway behind.