Of the third generation widebodies (assuming the 2nd generation included the 767 and A310) the 777 was the last to appear but has proven the most successful compared to the McDonnell Douglas MD-11 and the Airbus A340. It is hard to believe that it first flew as long ago as June 1994. In several ways it was a groundbreaking design since it was the first truly long range twin engined widebody of its size, plus was the first commercial airliner to be designed entirely on computers. It was also famously designed in direct consultation with 8 major airlines - all of whom, except Qantas, would go on to become major customers. The 777's distinguishing features include the largest-diameter turbofan engines of any aircraft, long raked wings, six wheels on each main landing gear, fully circular fuselage cross-section, and a blade-shaped tail cone.

Widebody airliners sell well so it is no surprise that the 777 has featured widely in 1:400 scale and continues to see a steady stream of releases even though the series 300 has taken over as the major production variant. Having said that there has not been the same evolution of moulds recently that the 777-300 has had. Nowadays three of the moulds below are in regular use (the Phoenix, Gemini Jets 2 and JC Wings 2 versions). There have been about 418 releases to date. 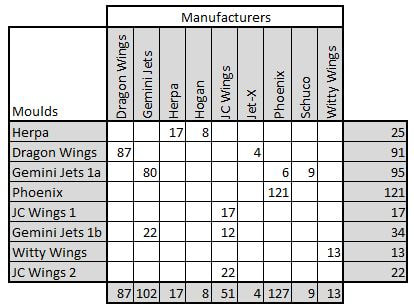 United Airlines became the launch customer on May 15, 1995 and although only 88 777-200s were built a further 354 777-200ERs, outwardly similar but with significantly enhanced range, were also produced. The base 200ER was further enhanced into the 777-200LR and 777-200F (both with extended wingtips) of which a further 59 and 163 respectively have been ordered or built. Nowadays only the 200F remains in production but the vast majority of aircraft built are still in service. With the advent of more 787s and A350s it is likely that in the near future the number of active passenger variants will decrease quickly.
Here's a British Airways 777-200 (non-ER), in this case with General Electric GE-90 engines:

Photo by Lasse Fuss from Wikipedia

The first 777 mould made in 1:400 appears to have come from Herpa, although as is typical for them in 1:400 they failed to follow up their advantage and the mould has only seen sporadic use since by them and Hogan. This is no great shame as despite it being a seamless mould it isn't impressing me much. The mould overall looks not ok, even if the cockpit to radome transition doesn't look correct, however the undercarriage is awful. It looks like 1:500 scale gear stuck onto a 1:400 scale mould. I'll be honest and say I have never seen one of these in the flesh so maybe I am wrong. Frankly they are so insignificant in this scale that the mould is unlikely to feature in your collection.

Gemini's 777 is one of those classic rock solid moulds that used to typify Gemini - in a good way. It has an excellent body shape, superior to the Dragon Wings at both the nose and tail. It also has much better undercarriage, although obviously given its age it is not rolling gear compatible. The gear is also perhaps a tad on the short side. Nonetheless the mould has aged reasonably well as long as the fuselage seam, caused by the cradle mount mould, isn't a problem for you. For secondhand models it shouldn't be but for new releases when there is a competitor it should. Gemini have subsequently modified the landing gear and still use this mould (see the 1b version below) and in competition with the modern Phoenix it doesn't fare well. Interestingly the first few Phoenix 777s used this mould as did a small selection of Schuco rebadges.
Phoenix (2004-present) - used 121 times

There was a time when Phoenix did great things and for a long time there were few moulds in 1:400 as well liked as their 777s. Given this mould dates all the way back to 2004 that is impressive, however it has recently lost the mantle of best 777 mould to the new JC Wings edition. The fuselage and vertical stabiliser are near perfect as are the wings (slot ins not a cradle) and horizontal stabs. The mould has been updated with aerials and satnav domes and they also look good. All four aerials are usually present whilst the small bump just after the wing is in good relief.

​One of the nicest features about the mould is the undercarriage. Phoenix usually have great gear legs and wheel hubs but on the 777 maingear it also has the nice feature that the triple wheel bogey can be moved up and down to simulate take-off and landing attitudes. The mould exists in 777-200/ER and LR/LRF versions. Note in the photos below the extended wingtips of the cargo haulers.
About the only criticism I can put the mould’s way is that the engine pylons aren’t deep enough under the wings. Perhaps the engines are a little small also but if so these are minor points and at least avoid that perennial issue with so many 1:400 moulds where the engines are far too close to the ground. Or at least they would if Phoenix could be bothered to put the models together properly.

I reviewed this Boeing house colours model in early 2019 and it exhibits this all too common problem with Phoenix 777s. The port side engine is not attached properly to the pylon and yet fully glued in to place. In addition Phoenix has seemingly forgotten how to print cockpit windows for its 777s as well so it is firmly buyer beware with new Phoenix 777s in my opinion:

Back before JC Wings tookover production of Gemini Jets and gained access to their moulds they created their own 777-200. It is pretty decent although it never really got a lot of use and struggled against the much loved Phoenix version with which it usually competed. The shape overall is good, however JC seemed to sometimes struggle to print the cockpit well and I'm not sure if this is a mould or just a print issue. It does have nice rolling gear and a slot in wings seamless mid-section, but the maingear seems to sit too low and the engines are quite close to the ground. For some reason JC Wings stopped using this and switched over to the inferior Gemini Jets mould. The decision doesn't really make a lot of sense to me.
Gemini Jets 1b (2015-present) - used 34 times

The old Gemini Jets mould had static landing gear. Following the move of Gemini production over to JC Wings several of their older moulds have been updated and in 2015 it was the turn of the 777. Unfortunately they merely replaced the landing gear and added antennae leaving the rest of the mould alone. The new gear rolls but to my eye appears to make the aircraft too tall. This isn't the end of the world but buying a modern widebody mould with such a major seam on it in 2018 seems wrong, especially when the competition has had a seamless mould since 2004. JC Wings also switched over to this mould and it took a few years for them to create a new 777-200 mould to replace it. The mould isn't a disaster but it is just outdated even with the updated landing gear and aerials. If you collect US airlines you are rather stuck with it since Phoenix just don't compete often in that space and JC Wings don't produce US airlines except on very rare occasions. For some reason Gemini has not been able to yet acquire use of the infinitely superior new JC Wings tooling.

Towards the end of their existence Witty Wings were beginning to show signs of good innovation. This 777 mould must have been one of their last new moulds but was a decent effort and featured see through engines - something rarely if ever seen before in 1:400. The mould is seamless and has rolling gears. The engines do seem a little close to the ground but overall it was a good mould that saw far too little usage before Witty and their sub-brand Apollo folded.
JC Wings (2018 - Present) - Used 22 times

By February 2018 JC Wings had announced 6 777-200s, two of which were flaps down versions. At the time they didn't have a mould to use, although they had recently released their first 777-300ERs on an all new mould at the end of 2017. Considering one of these won my model of the year in 2017 the hopes for the series 200 were high. Collectors would have to wait until July/August 2018 to finally see the new mould and they weren't to be disappointed as it clearly was a series 200 incarnation of the excellent series 300.

There is absolutely nothing wrong with the fuselage. The shape is perfect and there is plenty of detailing like the scoop inlets on the underside forward of the wings and the complicated asymmetrical APU tailcone. All the major aerials are represented on the mould and are nicely to scale. The forward satnav dome is nicely shaped and fitted, although the smaller rear dome is only printed on and not in relief. The landing gear is intricately made and accurate, aside from the JC Wings standard light grey gearlegs and wheelhubs. As with the series 300 on the underside the maingear bay doors are not just printed but also indented as part of the mould. The engines and engine pylons are excellent and the see-through cores with separate fanblades are very good. JC have not gone down the rotating fanblades line as they have with the 787 and, frankly, the mould is probably better for it as the blades are more realistic and there is no extra engine assembly (and thus seam lines) required.

Since it is clearly based on the 777-300 mould it is not surprising that the 777-200 does repeat the only thing that could really be called a fault with that mould – the attachment point of the wings to the fuselage. The fit isn’t as tight as I’d like and there is a noticeable gap. Regardless it is a lovely casting and the best 777-200 in 1:400 scale - plus it comes in the excellent flaps down variant.
I have reviewed two releases in detail at Diecast Flier - Cathay Pacific and Ukraine International.