The intention of this page is to describe and show all the Northwest Airlines liveries from 1946 to their merger with Delta in 2010. Schemes prior to World War Two are not covered.
1945-1948: NWA ROUNDEL
Immediately postwar Northwest adopted a new roundel with a winged NWA at its centre and Northwest Airlines around the outside. There was a thin lightning bolt running along the fuselage and a dark area covering some of the rudder. Titles were simply NORTHWEST. The new roundel logo was carried at the nose and on the tail of the new DC-4s. The livery was carried by DC-3s, DC-4s and the first Martin 202s.
1948-1957: RED TAIL (BLUE REAR FUSELAGE)
1957-1960: RED TAIL (COMPASS AT NOSE)
The DC-7Cs were delivered in a modified version of the first red tail in which the fuselage stripe did not widen at the rear and the red stripe at the nose was combined with the blue (albeit separated by a white outline). The compass logo was moved forward to behind the cockpit windows.

​Later during the early 60s the compass logo was dropped at the nose.
1959-1962: ELECTRA DELIVERY
The first L-188 Electras introduced a new 'Regal Eagle' logo to highlight the 'Regal Imperial Service' being provided. The golden eagle logo would only appear on the Electras and would last until 1962. The first Electra was delivered without the red nose stripe, as seen below, but subsequent aircraft all gained it. After 1962 the Electras would lose the eagle but remain in this livery.
1960: DC-8 DELIVERY
The first Douglas DC-8 received by Northwest arrived in a slightly modified version of the DC-7C scheme with the blue line narrowed a little. It didn't work well on the DC-8 and only N801US and N802US would wear this scheme.
1960-1969: JET RED TAIL
Sometime around 1967 this scheme was modified slightly. The US flag was moved from the tail to the lower rear fuselage and the red stripe at the nose was turned into a tapered wedge that ended before the nosecone. You can see the difference on these two Boeing 720s:

The modified version was worn by all the Boeing jets including the first 727-200s.
1969-1985: NORTHWEST ORIENT / THERMOMETER
1986 REPUBLIC HYBRIDS
The acquisition of Republic Airlines in 1986 created a mass of unusual hybrids (partly because Republic itself had several liveries on the go). These were worn by Republic's fleet of Convair 580s, Boeing 727s, 757s and Douglas DC-9s until they were fully repainted into the standard Northwest thermometer colours.
1985-1989: NORTHWEST (NO ORIENT)
With the impending merger with Republic on the horizon Northwest dropped the Orient from its titles as it was less relevant than it had been. The rest of the livery remained the same. This scheme was the first worn by the ex-Republic DC-9s and 757s plus the first worn by the new 747-400s and A320s. The latter had a light grey version (as did some DC-9s) rather than natural metal.
After the Bowling Shoe scheme was introduced some aircraft in the old scheme gained the new tail logo even though they kept the old fuselage colours. They also acquired the Northwest / KLM alliance roundel after the titles:
1989-2003: BOWLING SHOE
1994/1995: SIMPLIFIED BOWLING SHOE VARIANTS
During late 1994/early 1995 Northwest painted three of its fleet in simplified variants of the Bowling Shoe scheme with the aim of producing a cheaper and lighter livery. The aircraft that wore the new scheme variants were the DC-9-51s N761NC and N787NC plus the 757 N534US. For full details of the 4 versions see my blog post here:
Northwest Airlines 1994/95 Experimentals

1997-2000: N237NW ALLIANCE SPIRIT
In December 1997 Northwest painted a 'new' DC-10-30 in a unique livery celebrating its alliance with KLM. N237NW gained a wrap around livery showing both airline's schemes. The aircraft was repainted between March and June 2000 into standard bowling shoe colours.
2003-2010: NWA 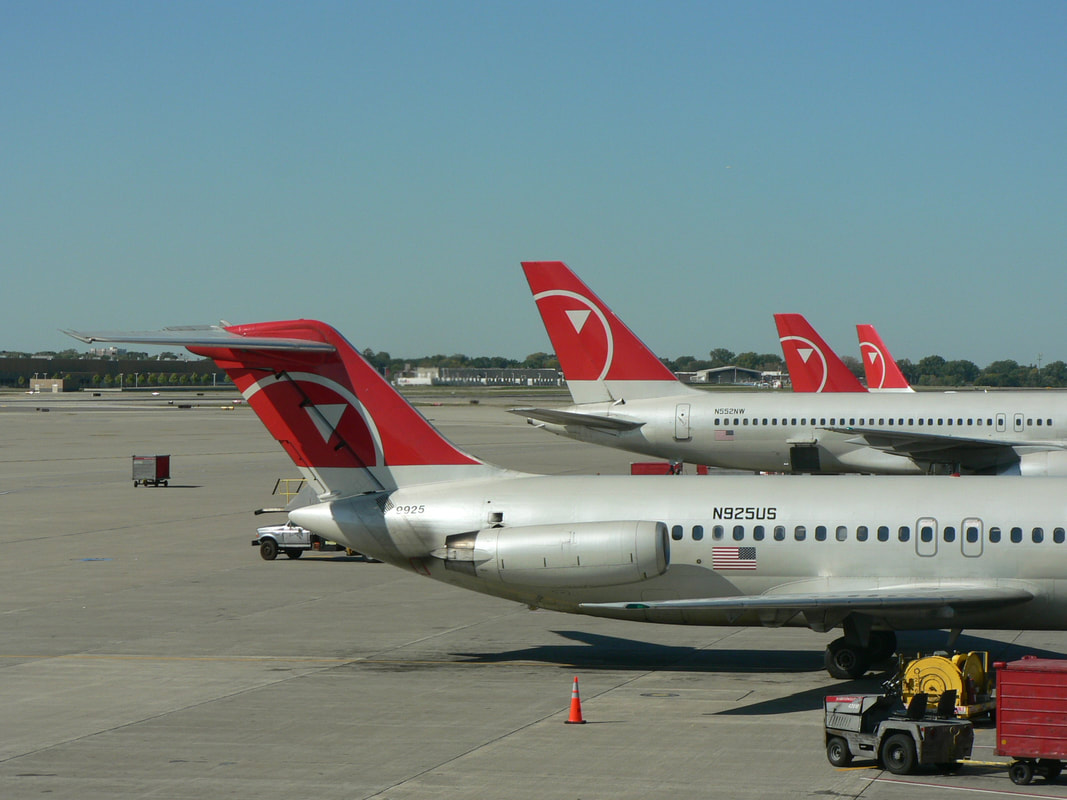