This review will cover the 737-700 / 800 / 900. The 737-600 will be covered separately here:
Boeing 737-600 Mould Review
In 400 scale the 737NG series has now had nine separate moulds made for it, however the majority of them are underwhelming or just ok. Only recently have better castings been introduced and the majority of releases are still on the inferior offerings from Phoenix, Gemini Jets and JC Wings. The breakdown of models by brand in 1:400 is as follows. As you can see there has been a significant amount of brands sharing usage of various moulds at different times: 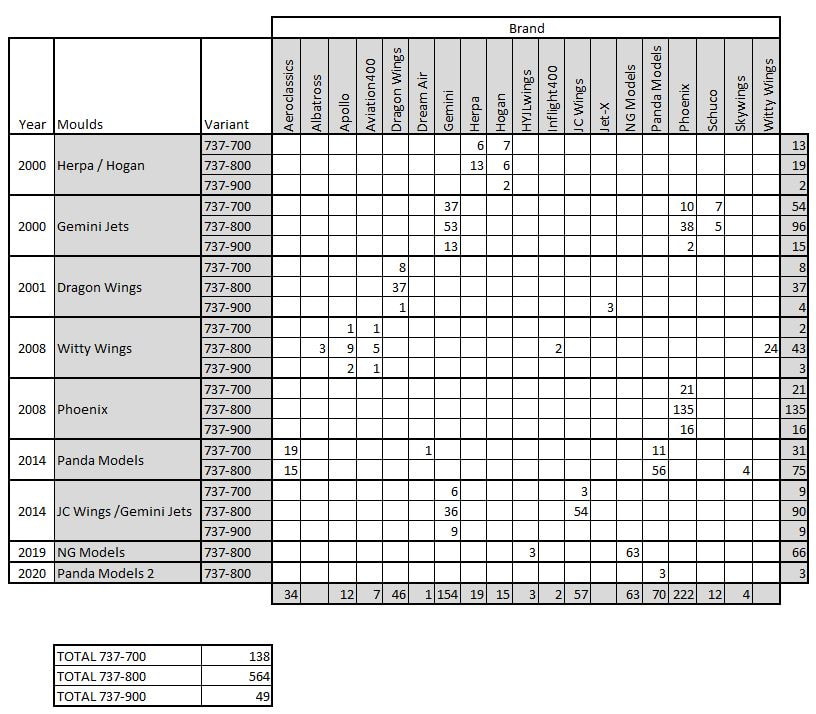 Figures correct as of October 2020

Gemini Jets / Phoenix Mould 1 (2000-2014, 2020)
The mould itself isn't bad and could be argued in some ways to be superior to both its successor moulds. Nonetheless the nose appears too long but at the same time too blunt. This does seems worse on some models than others and isn't a deal breaker for me. There is also a seam where the wings join the fuselage however it is quite discrete. Lastly as with Gemini's 737 classic mould the nose gear doors rather eat into the fuselage. On the plus side the rear undercarriage is well angled and the rest of the mould a good representation of the aircraft. Regardless of your thoughts on the mould it is hard to avoid having several of these in your collection.
Dragon Wings (2001-2012)
In keeping with most Dragon models the undercarriage is very simplistic but it does at least give adequate ground clearance. Other issues with the mould are typical Dragon ones i.e. loose fitting of the plastic elements like the engines and vertical stabiliser. Then again as with most Dragon moulds the wings join seamlessly to the fuselage. The mould continued in use fitfully into 2012. This mould doesn't compare too well to modern 737NG moulds but as a fallback if no alternatives are available it is not dreadful.
Witty Wings / Aviation 400 (2008)
Phoenix (2011 - Present)
The big issue with this mould isn't the mould itself but Phoenixes' inability to print the cockpit windows properly. On far too many of the releases the windows droop downwards at the back and do not have a straight upper line, ruining the aircraft's appearance. The problem is usually much more obvious on the left hand side of the model. This is often a deal breaker for me on the releases concerned - to see what I mean compare this poor Malev to this much better China Eastern. Several of the models below show this error to varying degrees (Ruili, CUA and Xiamen). Additionally, even when printed straight, the cockpit windows are often too thin.
Sometime in 2016 Phoenix modified the nosegear of this mould making it both longer and chunkier. It looks awful. The model no longer sits correctly and the gear is both too high and not aligned properly. It ruined the mould as the releases looked like old style Matchbox toys. The below photo shows the difference between a newer Jeju Air example and an older Hainan Airlines example. The Jeju also has shocking cockpit window printing. This nosegear change was reverted in 2017 but be aware some Phoenix 737s have this awful problem.

In 2015 Phoenix also released a 737 version with the new split scimitar winglets however the Phoenix wing was a complete disaster. See Jon Champs review of one of the two releases for a complete rundown. Suffice to say that the wing had bizarre deep lines on it, whilst the winglets themselves were rather chunky. Given it has only been used twice it is probably fair to say Phoenix themselves noticed the problem too.
Panda Models / Aeroclassics Mould (2014-2019)
The angular lines around the cockpit have been criticised but the nose itself was probably the best 737NG one available until the new NG Models mould. The only other issue is the rear undercarriage legs, which as with the newer Phoenix mould appear too straight. Lastly several of the early models (mainly the 73Gs) had engines that nearly touched the ground. This has been fixed in later releases and aerials have been added. In 2019 Panda announced that they would stop production of this mould and replace it with a new version.
I have reviewed the mould in detail for a specific release at Model Airliner.com:
World Expo 2019: Air China Boeing 737-89L B-5497 by Panda Models
JC Wings / Gemini Mould 2 (2014 - Present)
Early examples, like the 9 Air one below, had a nosecone that was way too pointy and an incorrect angle between the cockpit and cone also. As with JC Wings A330s often the wings had an upward flex in them bringing the winglets not far away from level with the fuselage roof! Later versions, like the China Eastern Enshi model below, have a much better nose area and wings at a sensible level.

Compare the difference in nose shape and wing height between an early 9Air model and a later China Eastern one.

The landing gear - especially the nosegear, is still not perfect. The gear legs are too short, the tyres too large and the nosegear doors wrongly angled. The same issues exist with the maingear but are less of a problem.
I have reviewed the mould in detail several times for specific releases at Model Airliner.com:
Transit Enabler: Ukraine International Boeing 737-86N UR-PSN by Gemini Jets
Lake Dream: Kunming Airlines Boeing 737-87L(WL) B-1507 by JC Wings
NG Models (2019 - Present)
NG Models New 737-800: A Detailed Review
The only criticism of any weight that can be levelled against this mould is that sometimes the nosegear is fitted poorly and so is too high. This is more a QC issue than a mould problem.
I have reviewed the mould in detail several times for specific releases at Model Airliner.com also:
Yananyi Dreaming: Qantas Boeing 737-838 VH-VXB by NG Models
Guizhou Business Card: China Southern Airlines Boeing 737-81B B-6068 by NG Models
In keeping with their general philosophy NG have slightly modified this mould over the course of its use. As you can see from the December 2020 Aeromexico release the nosegear door size has been increased and the curve down from the cockpit to the nosecone changed. The gear doors are better but I'm not sure about the nosecone modification.
Panda Models (2020 - Present)
Panda's new 737-800 mould made an appearance in mid-2020 but has so far only been used for a trio of P-8 Poseidons. Regardless of the failings of the models as P-8s the underlying 737-800 looks very nice and has the potential to become a competitor to the NG Models mould. For my full review of the initial P-8s see:
Panda Models P-8 Poseidon Review