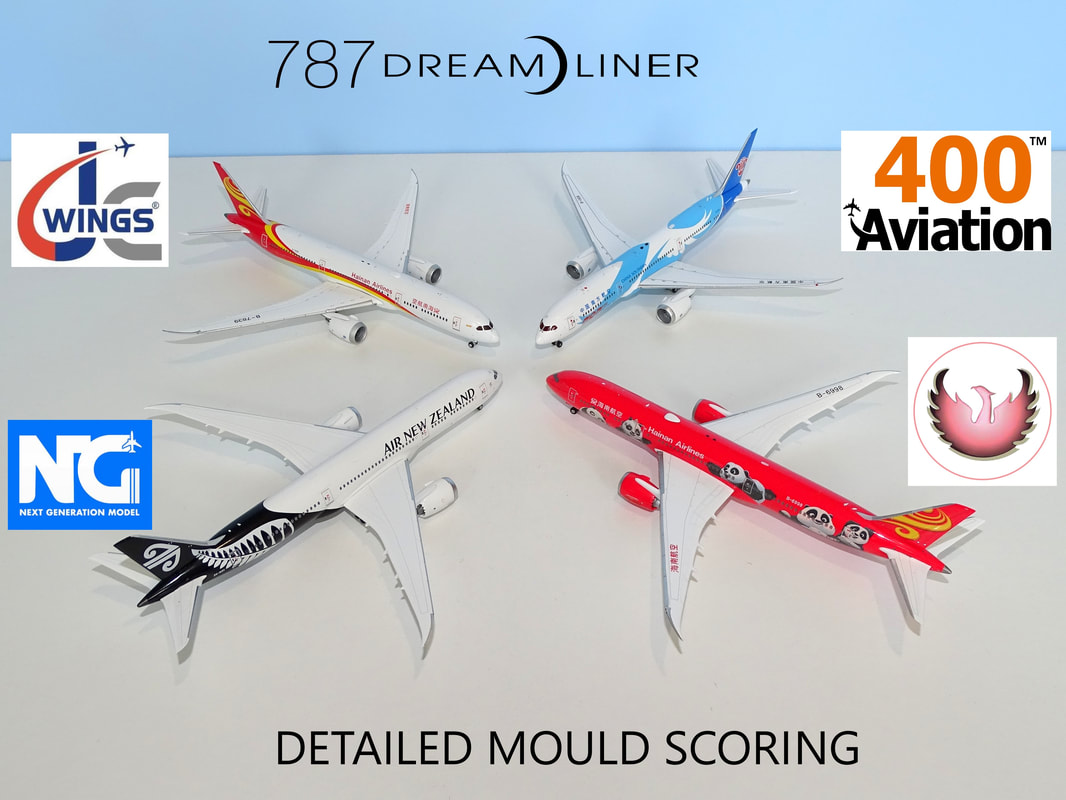 When I wrote my original detailed mould review for the Boeing 787-9 back in November 2018 there had only been 142 models made and the NG Models mould was new on the scene. Nearly four years later and there have been nearly 350 made and competition is more intense than ever. 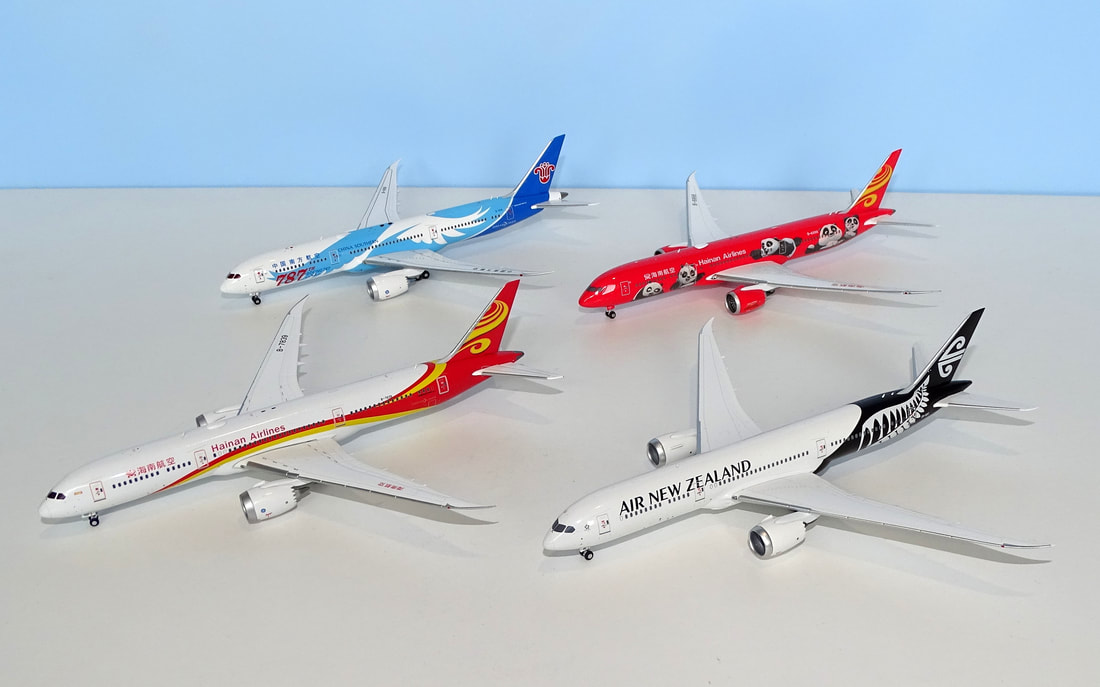 For my original review see here:
2018 Boeing 787-9 Detailed Review
Since then the old cradle mount Gemini mould has almost disappeared. I say almost because the recent LATAM release made only a month or two ago was still using it. They mainly use the JC Wings mould now and there surely can't be many more of these old models sitting in the legendary Gemini warehouse awaiting their release? I certainly hope not because obviously it is miles behind the more modern moulds being talked about here. 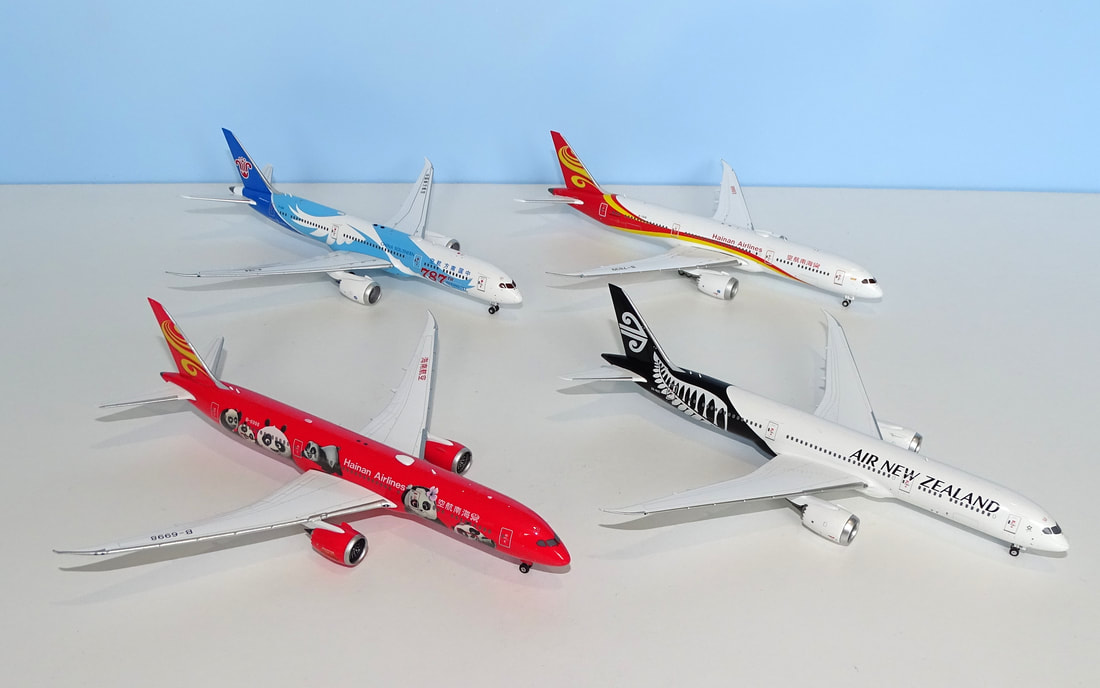 Since the original review NG Models has also updated their mould a few times, altering and improving details such as the nose and undercarriage. Lastly Aviation400 have just released their own new mould, which is the primary stimulus for this review.

I should also point out that JetHut have also released a 787-9 recently, which I have reviewed before, but is clearly not going to compete here as it is aimed at a different market. I won't therefore review it here, however if you want to see how it fares against the old Gemini and Phoenix see:
Jet Hut / DeAgostini Boeing 787 Review 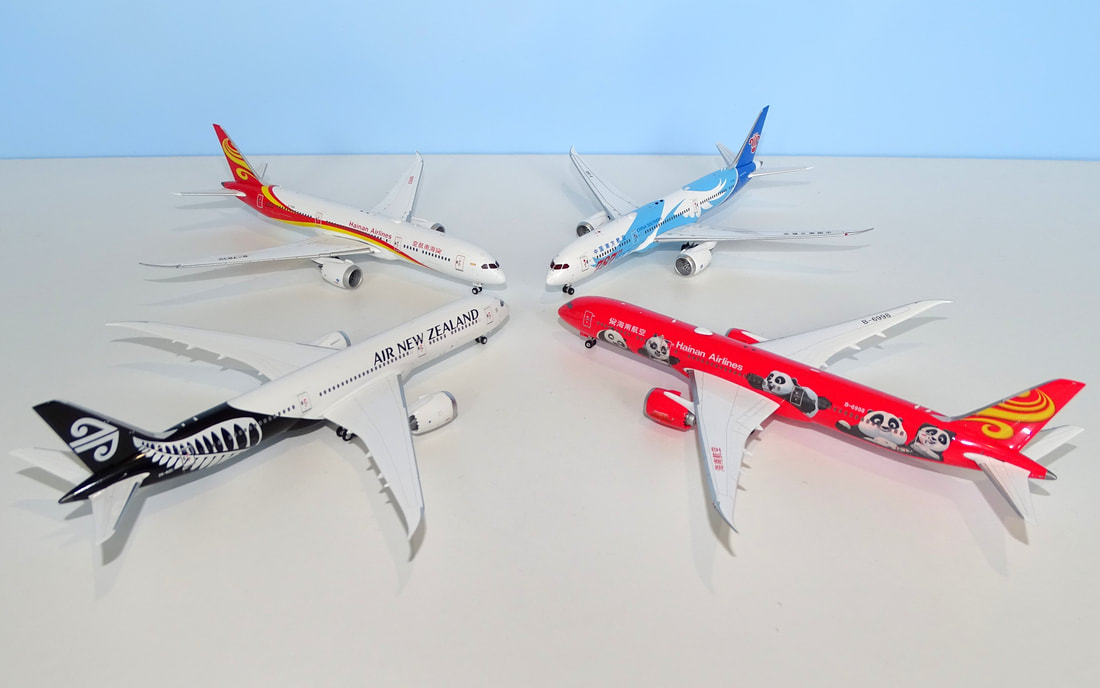 The moulds to be compared in this detailed comparison will be the following:
​All models are from my collection.
As per usual the review will take the form of a comparison of various areas of each mould to the real aircraft, with a score out of 5 alotted for each mould for each area. Adding the combined scores together gives you the winner. I am expecting this review will illustrate that there is a strong selection of 787 options in 400 scale nowadays.

​NOSE / NOSEGEAR
ENGINES & PYLONS
ENGINE SIDE PROFILE: The Phoenix mould incorrectly has the thinnest engine rims. The chevron sawtooth pattern at the rear of the engine nacelle is best replicated on the JC Wings mould as it is the spikiest of the four, although all of them are decent. The final stage exhaust is correctly pointiest on the Phoenix and NG engines. On both the JC Wings and AV400 the point is rather rounded.

MAINGEAR
EDIT: Since I wrote this it has been brought to my attention that the maingear trucks on the NG Models 787 are too narrow when viewed from the front (see the photos below). I had never noticed this before. The Aviation400 and JC Wings examples have wider maingear, which is more accurate. It is a relatively minor point but I have docked the NG Models mould a point now due to this.

ENGINE INNERS: The advent of hollow core engines is something that actually made Phoenix update their 787 mould in 2018, although clearly they should have revisited other mould elements too. Anyway hollow core fans are a mixed blessing a lot of the time (and NG has recently ditched them on their 777s). The Phoenix examples are thick and there aren't anywhere near enough of them. Alternatively for JC Wings there are more blades but they are very thin. The Aviation400 blades are both a good thickness and well numbered but perhaps slightly lacking the right fan curvature. It is however NG that have this feature represented best as they aren't trying to show the hollowness off and also it helps that they paint the fans darkly. Their blades are well shaped and curved. 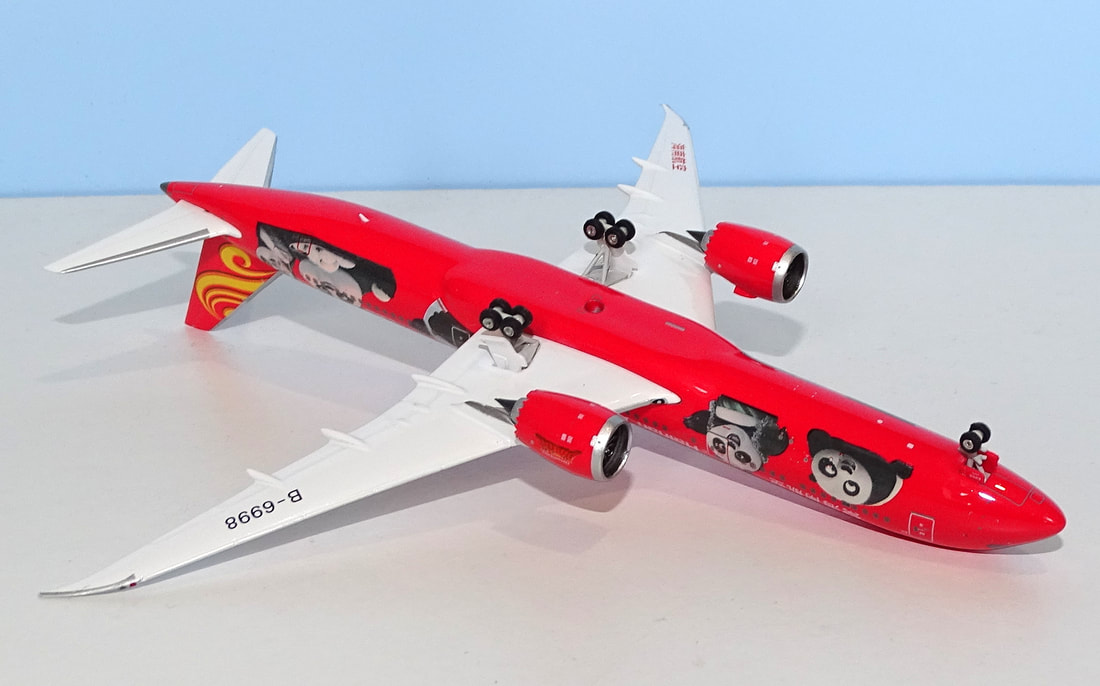 Talk about Vanilla. The Phoenix mould above is a clean slate underneath. The diagnostic central bar along the belly (so obvious on the JC version below) is absent as are the chunky intakes at the fore wingroot belly. The wing join to the fuselage is a straight line with no finesse and also note the missing wing tube I mentioned earlier.

The JC Wings version below is far superior and JC even include the little inside gear doors - the only brand to do so. My only criticism of the JC effort is that the wing join isn't as tight as it could be. 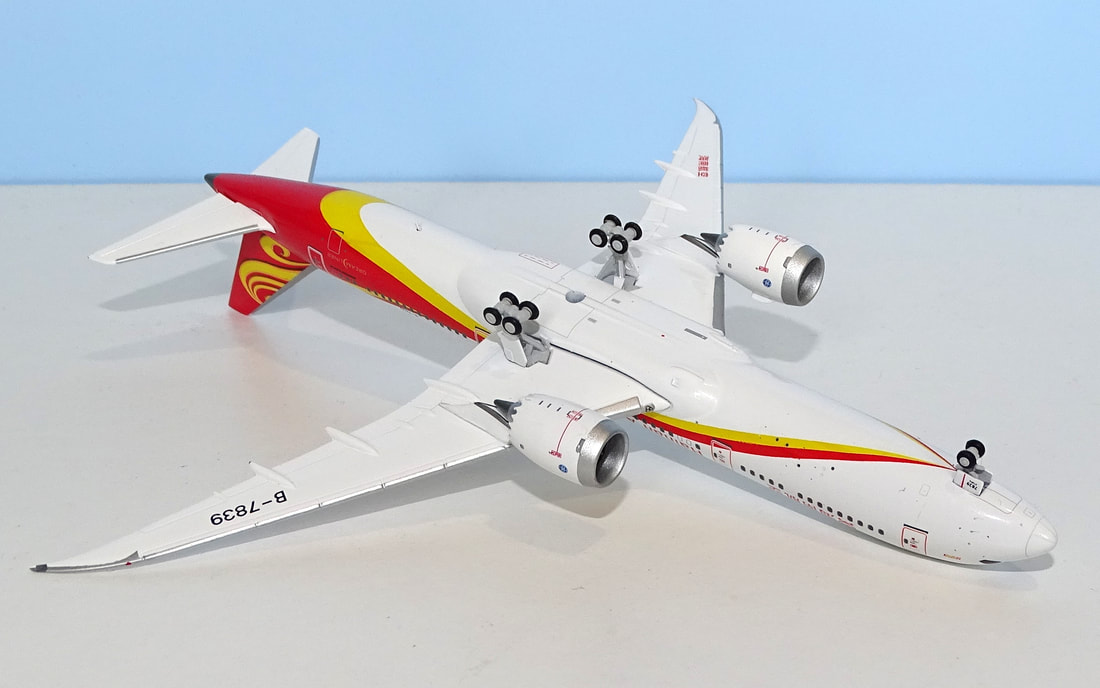 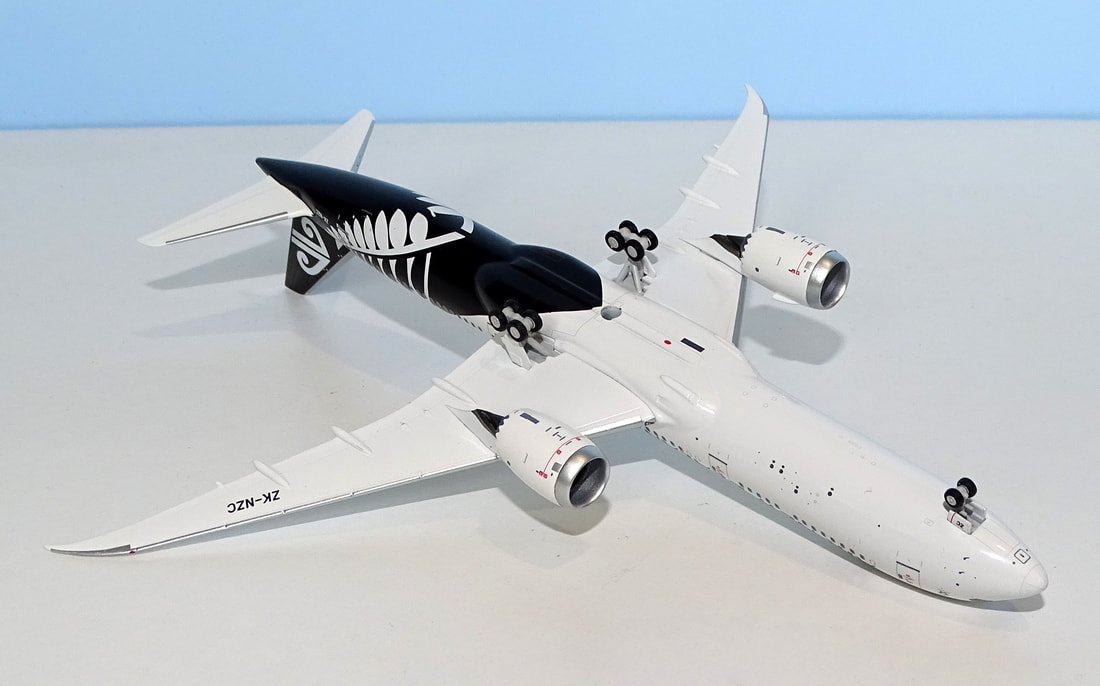 The NG Models version (above) and Aviation400 version (below) have all the good points of the JC Wings version but with a tighter wing join. This also has a better shape at the front where it joins the fuselage. The Aviation400 example obviously also has the additional beacon light (which I'll score in a separate category). 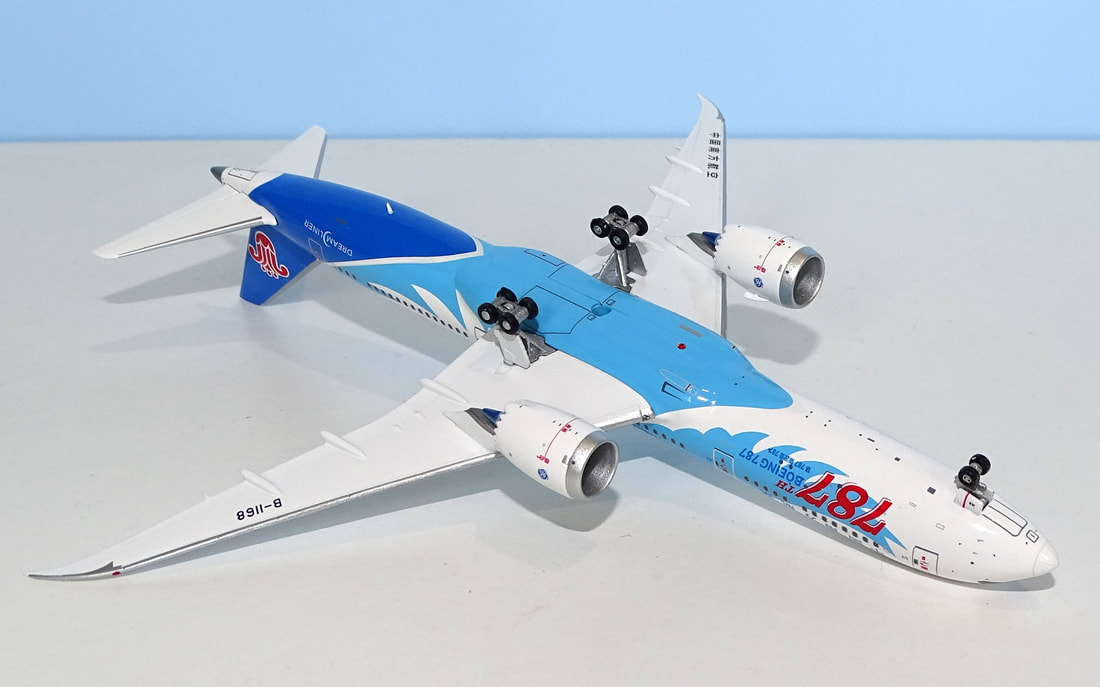 The Phoenix mould has all four aerials, which are well sized, if not always well shaped. It also has both the large Wi-Fi dome and the smaller roofline dome aft of the wing - the latter moulded in and the former an insert. The JC Wings mould below has only 3 aerials (although later releases have all four). The aerials are a little oversized. Only the large Wi-Fi dome is present.

The NG Models version, above, has the best sized and shaped aerials. This model doesn't have the Wi-Fi dome but others do when needed. That is the only roofline dome moulded in.

The Aviation400 mould, below, has all aerials but as with the JC Wings version they are a little large. What is does have are both the major domes present (with the rear one moulded into the fuselage) plus the two small mid-fuselage roof bumps. I'm not sure what these are and they are barely visible on the real aircraft so whether you think they are great or oversized is up to you. It also has very nice jewel light nav beacons - one on the roof and one on the belly.