TWA received its first L-049 Constellation on October 1 1945 and began transatlantic services with the type in February 1946; so beginning the great arms race between Douglas and Lockheed, which continued right up till the first 707s and Comet 4s entered service. This rivalry was initially fueled by Lockheed's agreement with TWA which tied up early production aircraft and forced United and American to look elsewhere.

The initial L-049 variant was really a civilianised C-69 military transport. 87 were built and delivered to TWA, Pan Am, AOA, BOAC and Air France. The Pan Am aircraft were upgraded to L-149s with extra fuel tanks. The L-049 gave time for Lockheed to produce an improved design it called the L-649. This had a wide range of improvements, including new engines, but outwardly it looked the same aside from the availability of a Speedpak belly pod. Only 22 L-649s were built as most airlines chose a yet more improved version called the L-749. This again had the same outward appearance, but extra fuel tanks allowed it to regularly be able to cross the Atlantic non-stop. Air France received the first of these in April 1947. Production ran until the new L-1049 Super Constellation was ready in 1951, by which time 119 L-749s had been built.

Photo by Bill Larkins from Wikipedia

At Heathrow in 1954 with SpeedPak. Photo by RuthAS from Wikipedia
Dragon Wings Mould (2004)

Dragon has produced four releases (though the AOA aircraft has been re-released twice in various sets). I own three of them and have to say it is a good representation of the type. Issues are the standard ones for a Dragon mould, namely chunky thick simple undercarriage and deeply engraved wing lines. The outer tail surfaces do have a tendency to leave the stabilisers and as you can see the mould is so unstable that Dragon has been forced to put chocks on the main gears. Even with them the models tail sit very easily.
Aeroclassics Mould (2005)

One year after the Dragon mould Aeroclassics released their version on which they have made a reputable 15 aircraft. The mould also captures the shape of the type well and has much superior undercarriage legs to the Dragon. Unfortunately the mould is spoiled rather by the very obvious seam line - a common complaint point on earlier Aeroclassics prop moulds (see the L-1049 and Viscount). This mould does however have no obvious join lines on the wing roots or engine cowlings which afflict the Dragon mould. It also is much more stable than the Dragon version. Despite the seam it is one of my favourite prop moulds.
Sadly it appears both of these moulds are out of use - with the last being produced in 2006. This is despite there being quite a few possibilities for the mould still left undone (like Air France, TWA 'silver top' and Chicago & Southern). Also nobody attempted to make a version with a speedpak - which would have been really nice.

Lastly it is worth mentioning that as with the L-1049s Aeroclassics has played a bit fast and loose with radar equipment. For example they released a TWA L-749 in the Twin Globes scheme but with the short non-radar nose when all Connies that got to this livery would have had radar, which drastically altered their appearance. Here's the real thing radar-equipped and the model: 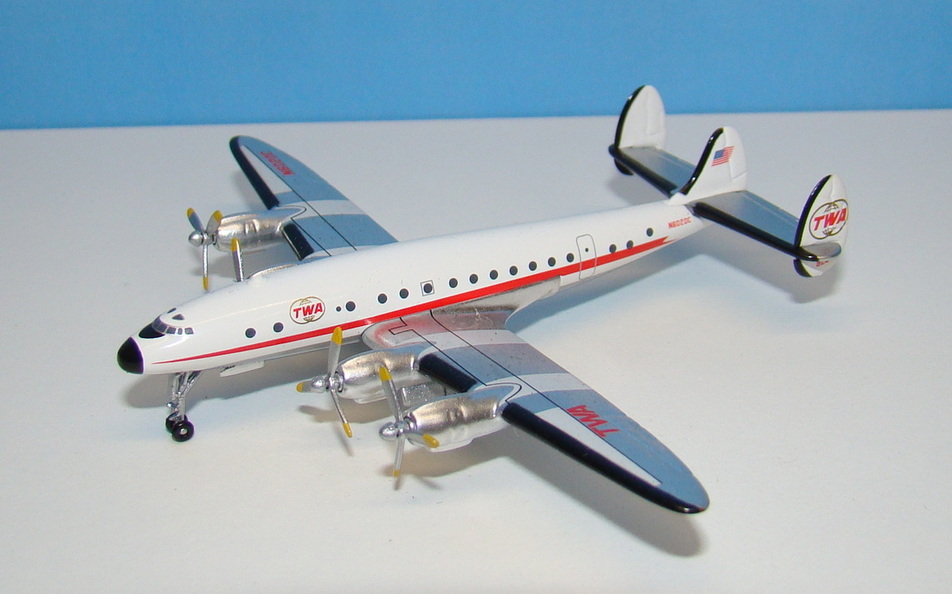