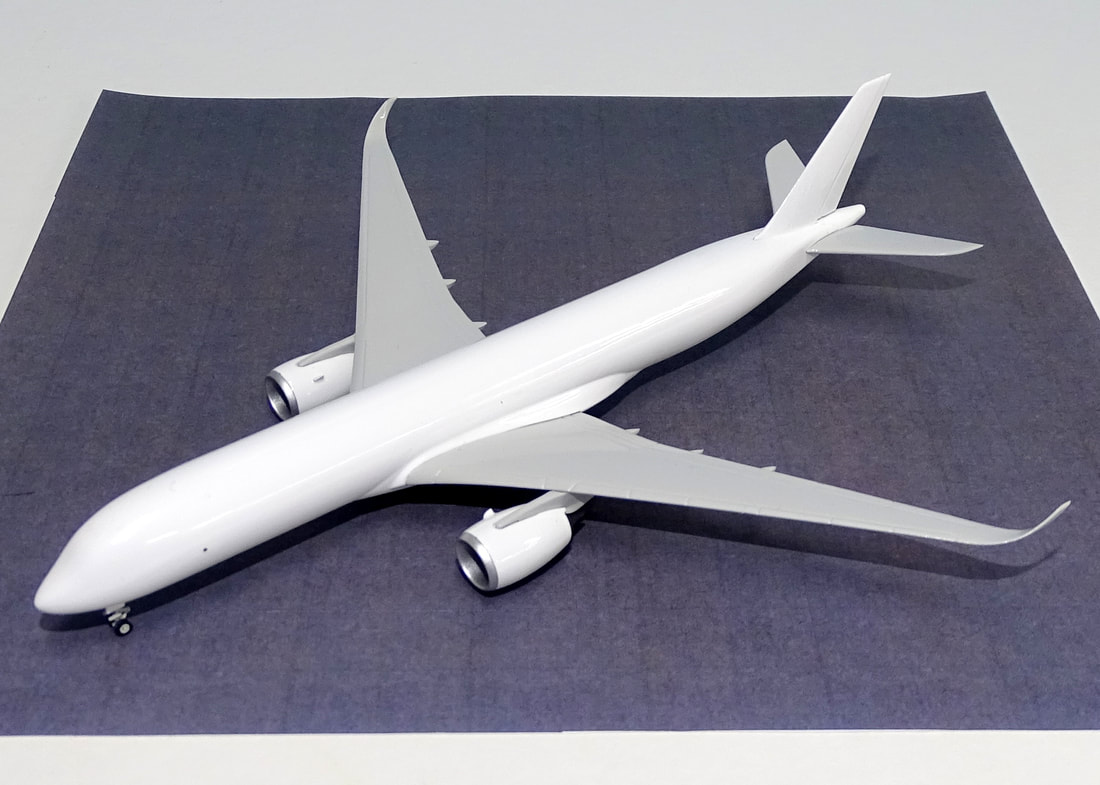 It was last January that I reviewed the first sample of NG Models' Airbus A350, which at the time only existed as a resin model and not diecast. With all the Covid mess that seems like an age ago now, but NG Models have been quietly working on the new mould and at the end of July I received the latest sample - this time a fully complete die-cast version. For my review of the first sample see:
NG Models New A350-900: A First Look

Pedro Aragão / CC BY-SA 3.0 GFDL
Obviously there is a lot of competition in 400 scale for the Airbus A350 with three moulds currently battling it out for supremacy so it'll be interesting to see how the impact of a 4th mould changes the current dynamic. Will this be the mould that pushes Phoenix to the brink - since their A350 is clearly the weakest of the existing moulds. For my recent detailed review of the A350 comparing the three current moulds see:
A350-900 Detailed Mould Review Comparison
Only time will tell but in this review I'll take a deeper look at the new NG A350 and score it in comparison with the winner of the detailed A350 mould comparison, which was the Aviation400 A350.
The New A350 Side on vs the 1:1
Below are side by side shots of the A350 compared to the new mould. Note that the lower Air China aircraft has the new updated Sharklets:

First impressions of the new mould are that it very closely resembles the real thing. 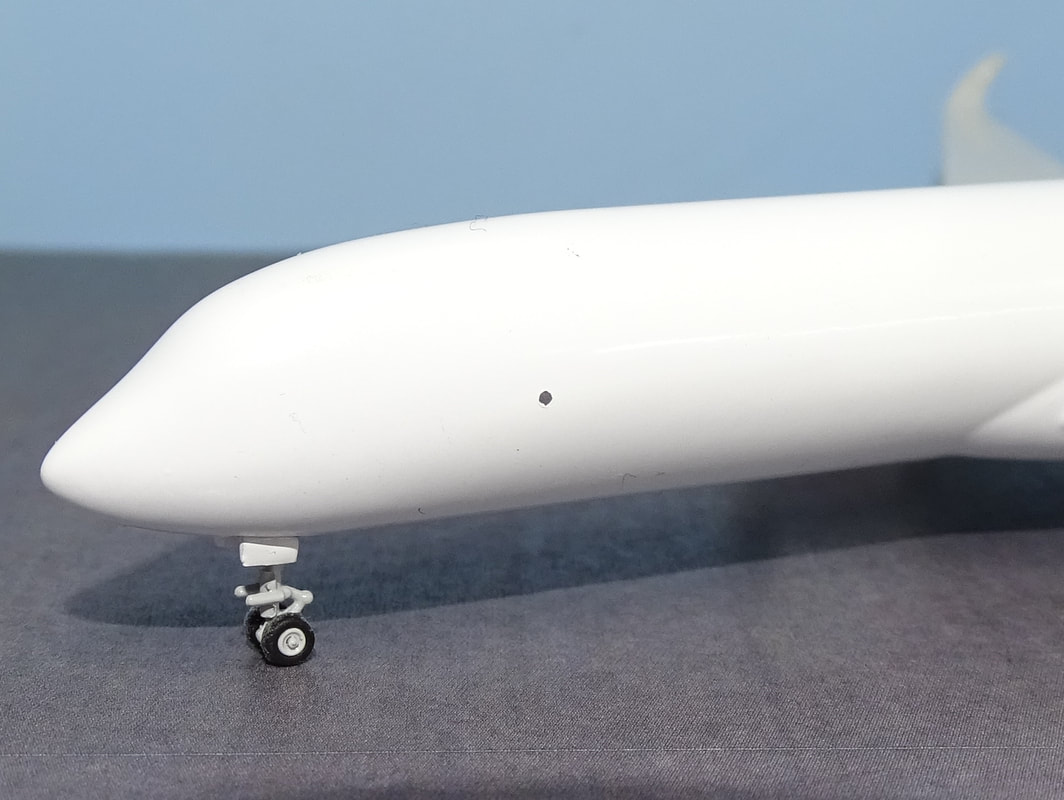 The forward fuselage has always been the most contentious area of any of the 400 scale A350s as there is a double profile change between which sits the cockpit. Both the AV400 and modified JC Wings moulds exhibit good noses but neither has a strong enough change beneath the cockpit windows. The new NG mould has easily the strongest angle change here and probably the best profile of the three, although you could argue it's nose angles a little too much and is slightly too long.

​The original resin sample displayed a slight hump after the cockpit along the roofline and although this has lessened it does still seem to be present to a small degree. You can see it in the profile shots above. It is slight but I think it is there.
The nosegear is the best across all the moulds. It is thin and delicate with a better strut and detailing. Also it has a better nosegear door than the AV400 and Phoenix mould and better nosegear tyre size than both as well. It also holds the aircraft slightly higher and is a better height than the JC Wings gear leg. 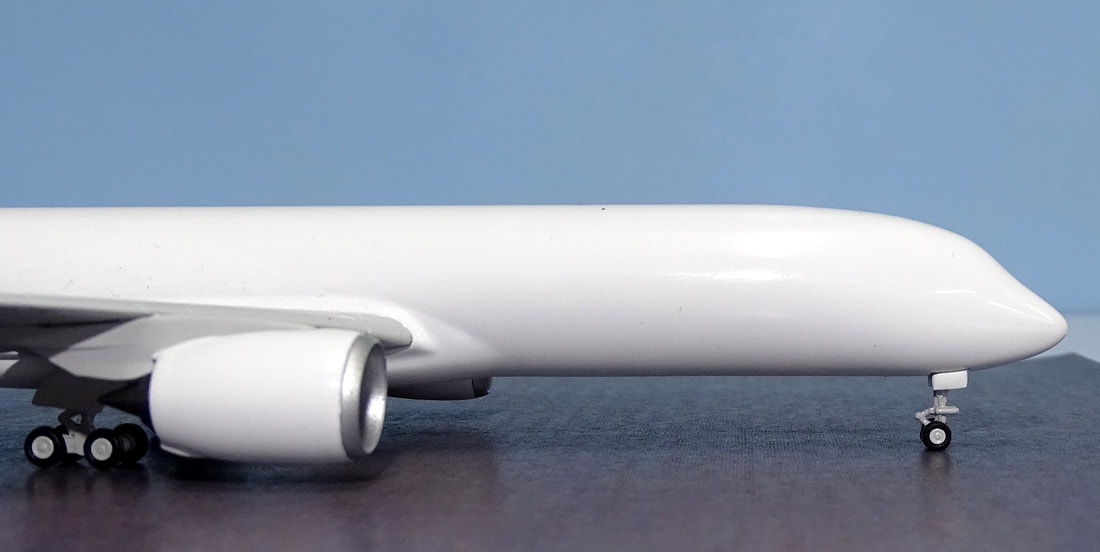 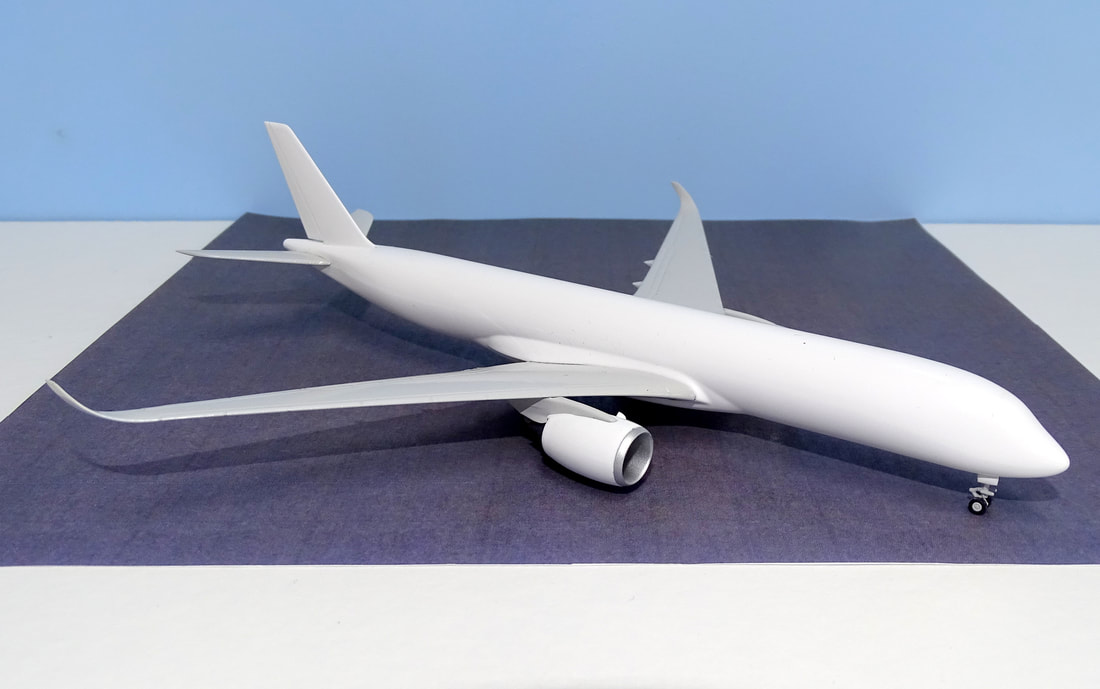 The shape and detail of the NG Models A350 engines and pylons is near perfect. The AV400 version is excellent in this area aside from the engine pylon shape at the engine rear. This is not an issue with the NG mould, which has the complex curve and join correct. The engine pylons hang the engines with plenty of ground clearance and the shape and size of the exhaust portions is good. 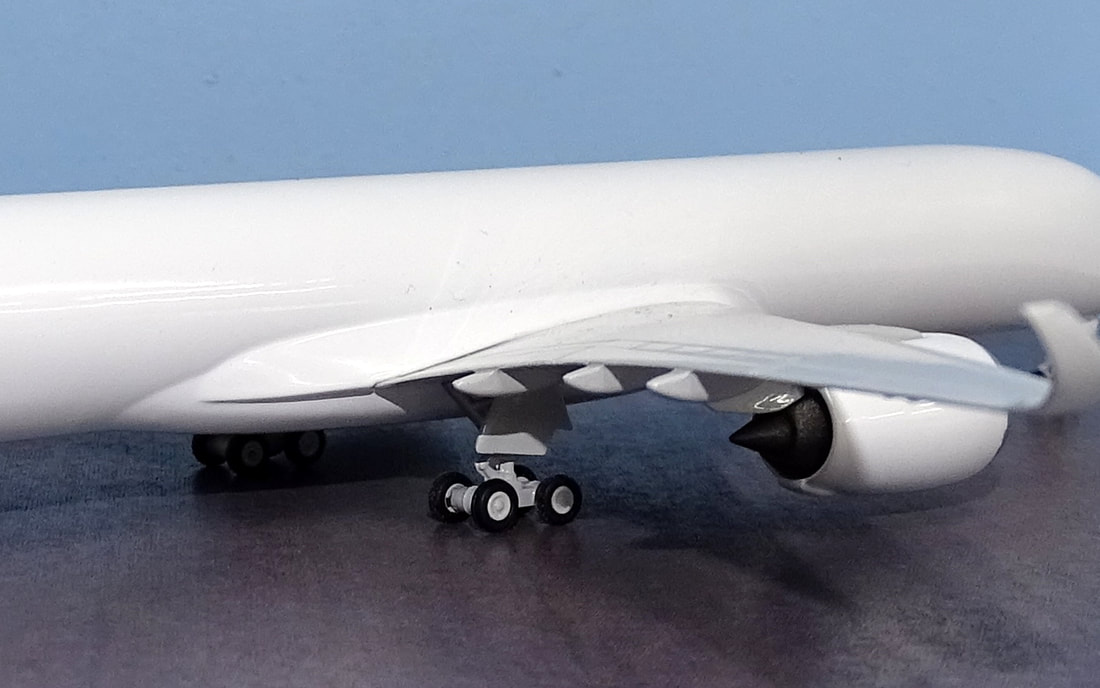 The maingear bogies, unlike all three competing moulds, are static but this does allow for greater realism around the bogie itself. The shape of the maingear doors is accurate with the complex rear curve well defined and the forward line sharp. The doors sit a good height up the gear legs and the notch at the top is present also.
ENGINE INNERS

The rear portion of the fuselage is a near perfect match for the AV400 mould. The tail shape, squared off tailcone and horizontal stabs are all very good. The join of the tail front to the fuselage roof is slightly better than the AV400 and on par with the JC Wings, which is perfect in this region also.
FUSELAGE DETAILING
Obviously this mould lacks aerials, domes and printing. Something else it lacks, as does the new 747SP, are the scallop inlets on the underside of the fuselage between the wings. Presumably these will be printed on, although they are present in relief on all three other moulds. 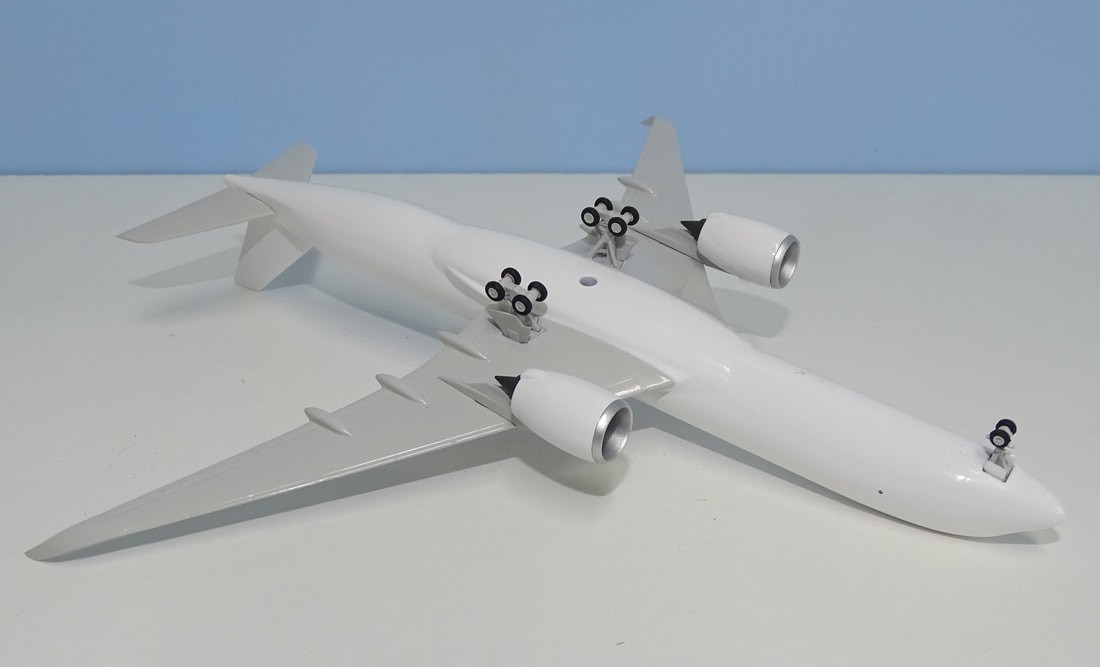 Coming relatively late to the market a plus for the NG Models A350 is that it can be moulded to take into account the new style A350 winglets introduced in 2018. See Leeham's article on the new Sharklets here. The new Sharklets are taller and more angular than the Sharklets present on the other three moulds.

Incidentally when I reviewed the earlier resin mould I had reason to complain about the wingspan. This has been resolved and the wings are now of the correct span. This is a hard area to score but I'm going to hedge my bets a bit, especially as the AV400 mould comes with beacon lights. 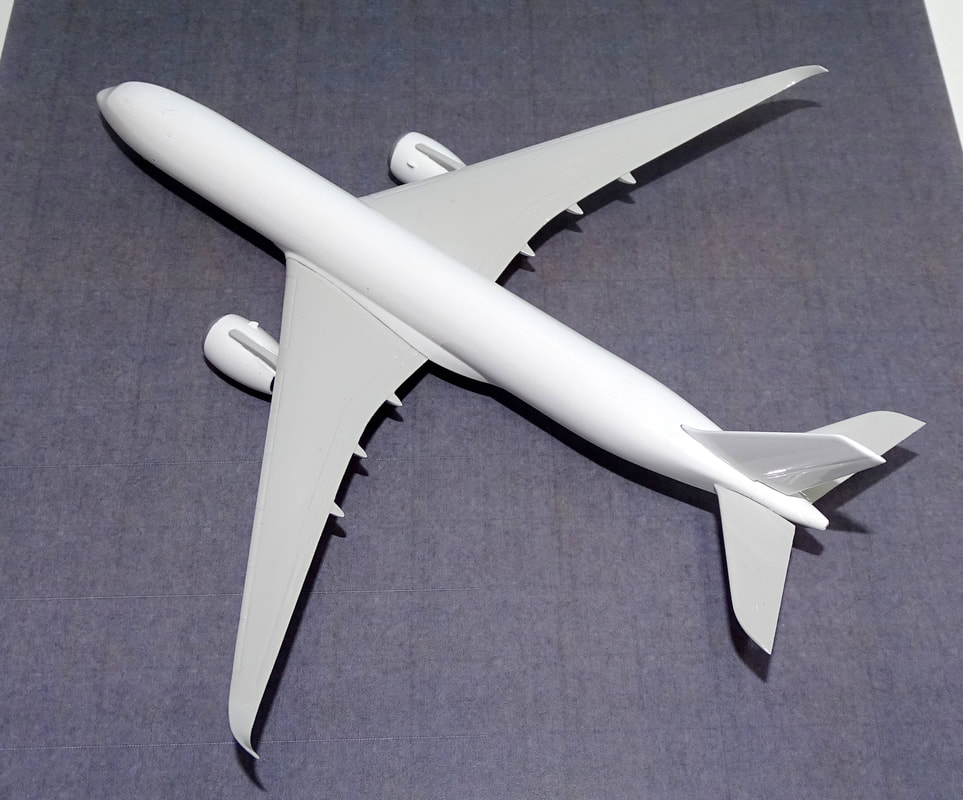