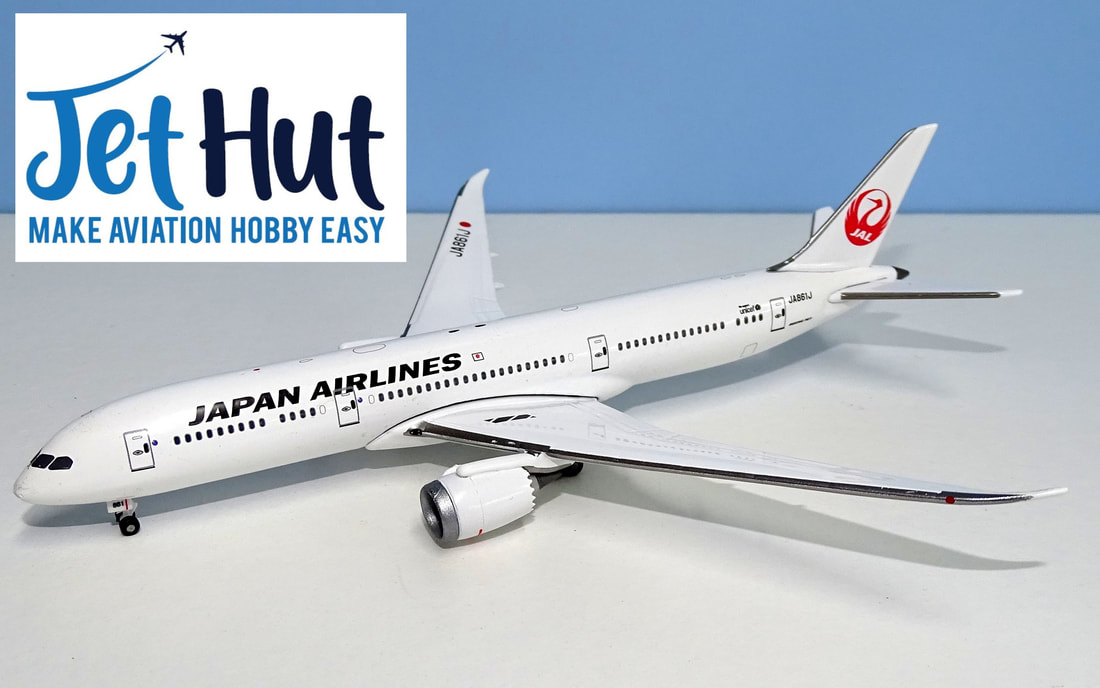 Jet Hut: The De Agostini Connection?
Even though this 787-9 is never going to be up to the standard of the majority of 400 scale brands it is still worth comparing it to them so in this review I will look at it in comparison to both the real thing and the Gemini Jets, NG Models and Phoenix moulds.

NOTE: At all times it is important to understand the audience this model is aimed at and the huge price differential (around 1/3rd the cost of an NG 787).

​I also get the feeling that this example is probably reject stock from the JAL Connection line given its printing and build issues, which are not apparent on other images of it I've seen.
The Mould vs 1:1 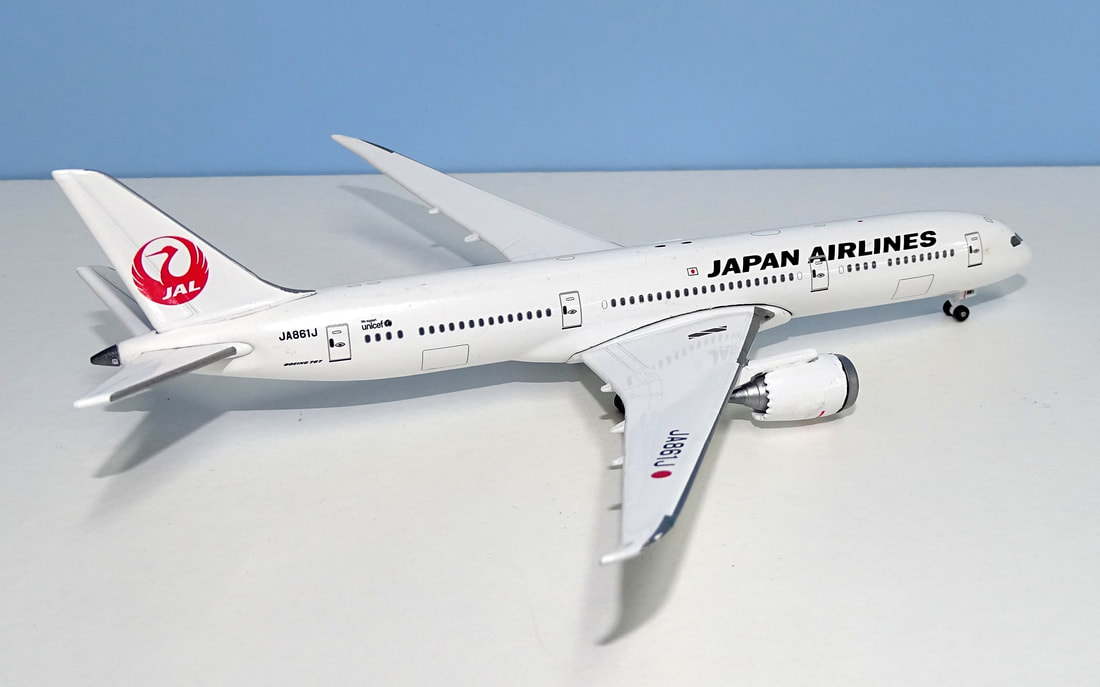 The general quality of the mould is obvious from the photo below. There are clearly printing issues but I will ignore those for now. What is interesting is actually how passable the base mould actually is. In many ways initially it resembles a 400 scale model from about 2008 and shares several of a 2008 era product's characteristics. That means it is missing many features a modern 400 scale 787 has and dispenses with 'oversized gimmicks' as some call them (ha ha). ​

​This means:
Nonetheless, the basic shape of the fuselage is broadly accurate. Additionally the undercarriage is quite detailed and has nice doors (although all is in a light plastic grey colour).

This screenshot shows the same model with a much tighter cradle fit
The tail shape and fit is ok. The top could obviously do with being more angular at the rear tip but overall the shape is ok. Another interesting point of the mould is that the APU / tailcone is an added on part, rather than the rear mould being painted as in other brands. 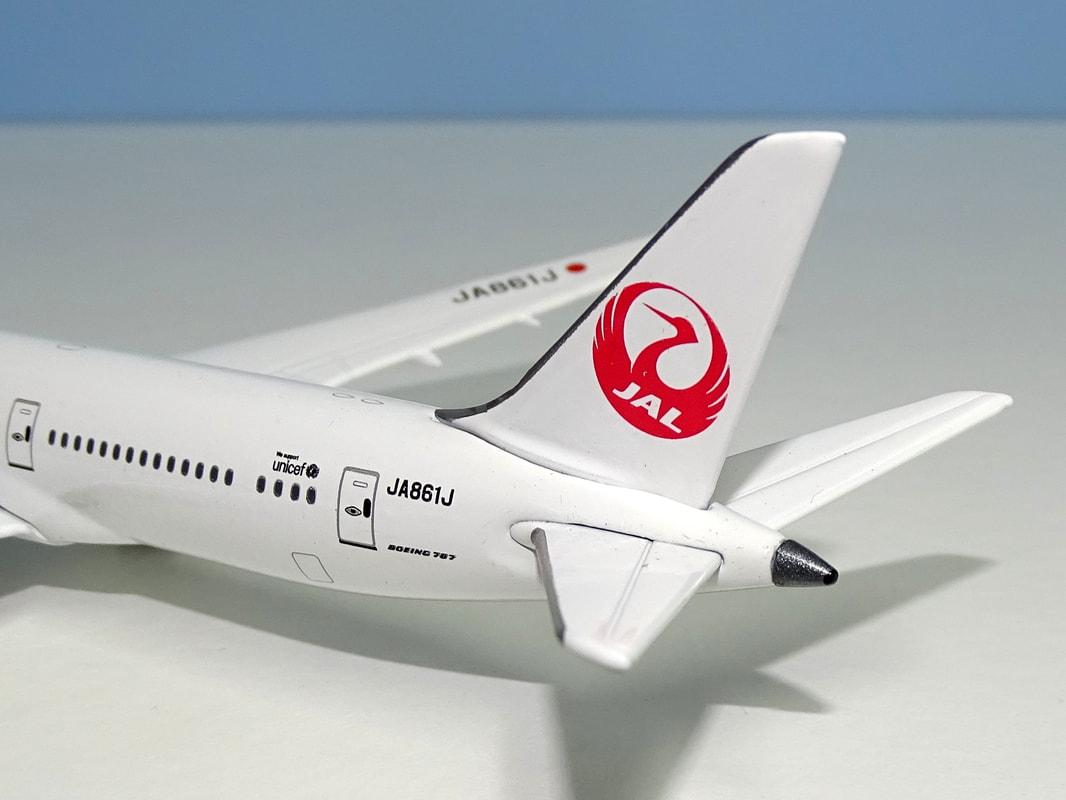 The wings clearly curve more than they should for an on ground configuration and they are quite thick, especially beyond the engines. The underside of the mould is very vanilla and lacks the small intakes or the large central structural bar between the wings running front to back. Note it also lacks a stand hole. 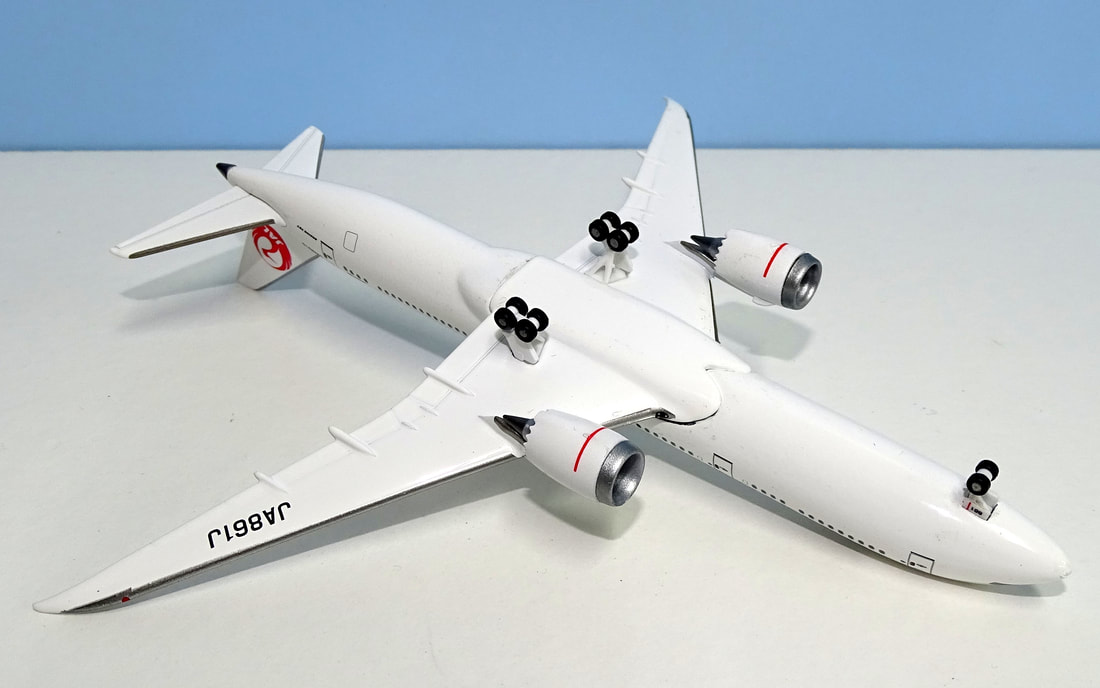 In general the model looks like a 787 and has most of the features broadly correct. Obviously to keep costs low the finer details have been overlooked and where fine modelling is required cheaper shortcuts have been taken. If I was scoring this as a standard 787 in 400 scale it would probably only be getting a 5 out of 10, but remember the price point. How much worse is it than some of the existing competition? I'll take a look in a later section.
Printing
This is another area where costs have obviously been cut. The model lacks a lot of the sort of detailed printing you'd expect from Gemini Jets or NG Models (nosecone rings, engine details, underside detailing etc, undercarriage bay doors etc), however it isn't in some ways dramatically below the sort of printing you get from Aeroclassics and Phoenix. I'd say it was at the sort of level Dragon Wings were doing in the 2000s. Clearly the straightness of the tail logo, especially on the left side is awful, however what printing there is is actually surprisingly nicely done. The font of the JAL titles for example is accurate and smaller parts like the unicef logo are present. Once again model photos from JAL Collection promos do not have the poor tail printing alignment this example has, which leads me to think it is rejected stock. 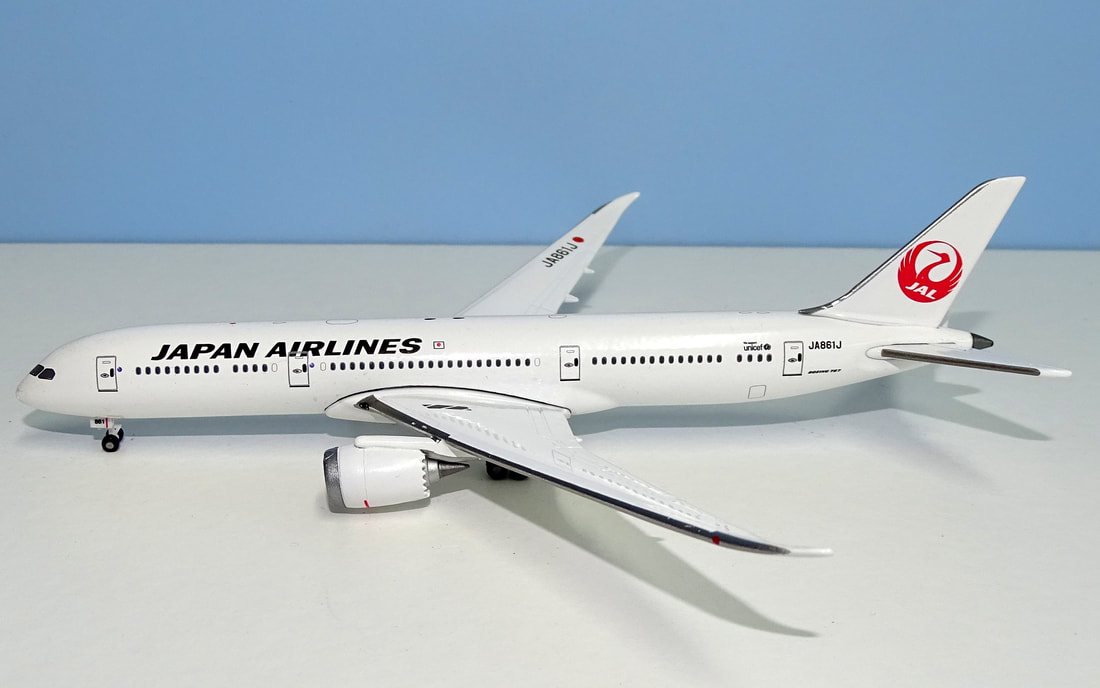 Sadly the decent printing is rather undone by positioning problems. The windowline is too high and the cockpit is slightly too low as you can see when comparing to an NG Models 787 (in this case a China eastern one):

Printing detail is quite rudimentary but does include quite a bit of detailing along the roofline. If I had to score the printing here I'd say it was another 5 out of 10 but with the tail logo fixed it would be closer to a 7. 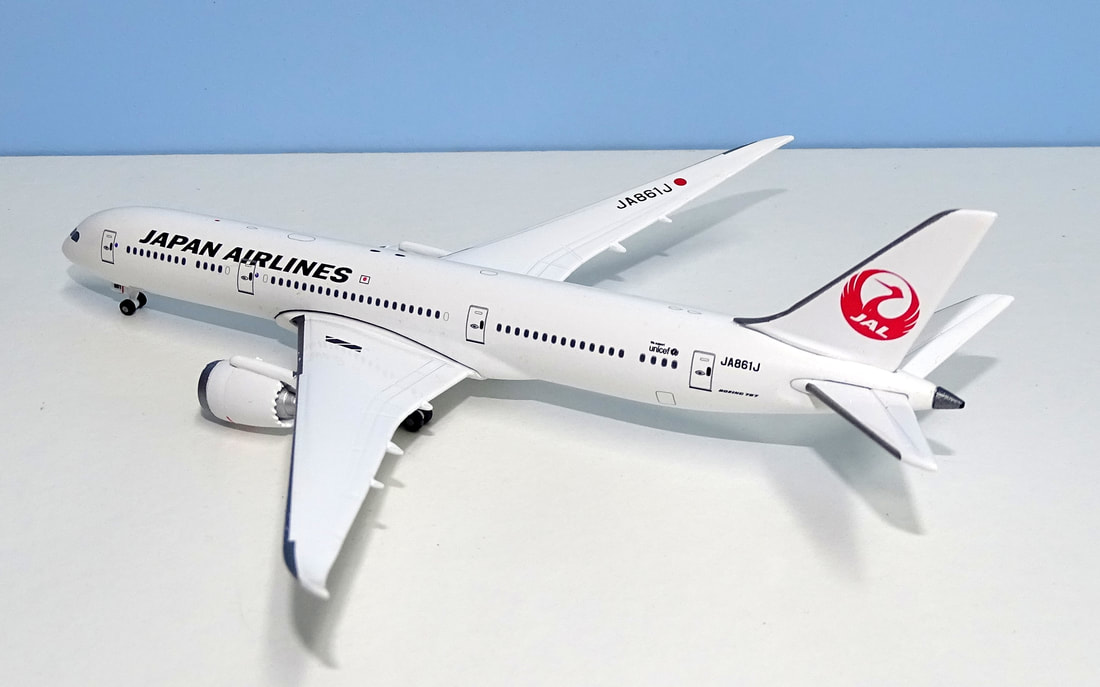 Quality Control
This last category is an area of some concern, although as I say this example is almost certainly rejected old stock and so probably isn't representative of what the finished product is usually like in that regard. As already mentioned the wing cradle fit is not great. In addition the nose has a rather large chip on it that has been painted over:

On the right side of the model the engine has been poorly put together and mounted too. It's another 5 out of 10. 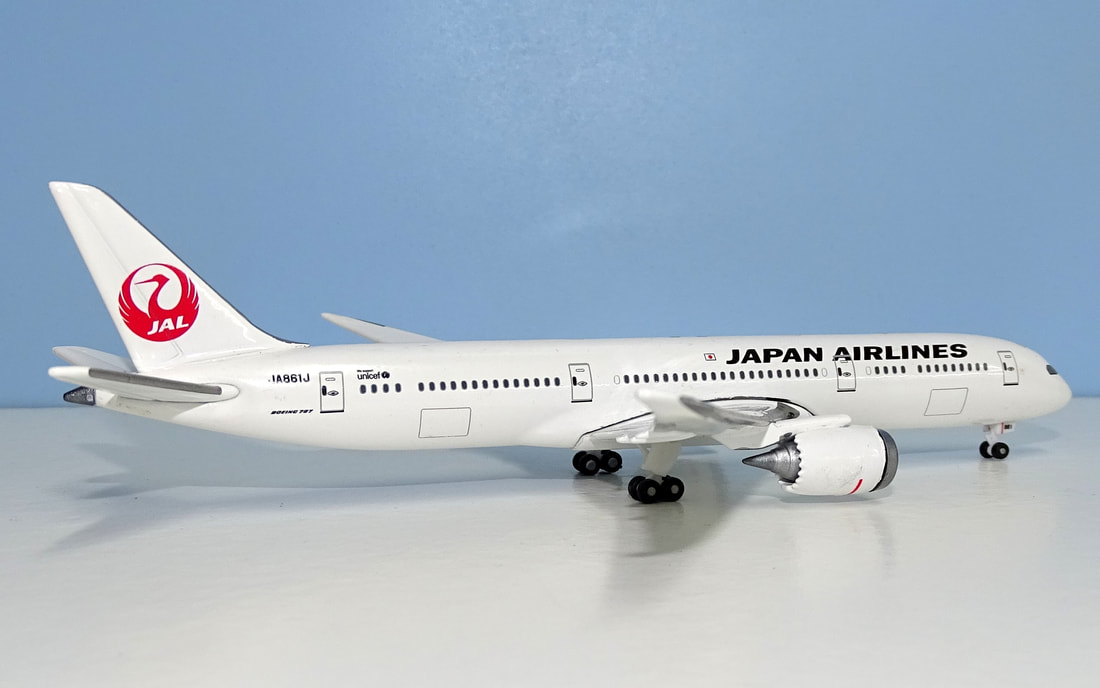 Summary
A score of 15 out of 30 would usually be a real pasting and for a standard 400 scale this would be the sort of thing that should never get sold, no doubt about it (although I've seen issues as bad in sold models many times). But if this costs you $15 and you give it to your 9 year old child would you be unhappy with it? It looks like a 787-9 and has much better printing and fuselage detailing than other die-cast models in this price range I've seen.

Indeed if we assume that this is rejected stock and I was scoring the versions of this same model I see on the JAL Collection site then it would be getting a respectable 21-22. I'd probably recommend this quite strongly for those that want a fairly accurate but inexpensive representation of an aircraft in this scale. In my opinion there is plenty of potential here.
Below: This image from the JAL Collection site shows an example of how the model looks without the printing and QC errors: 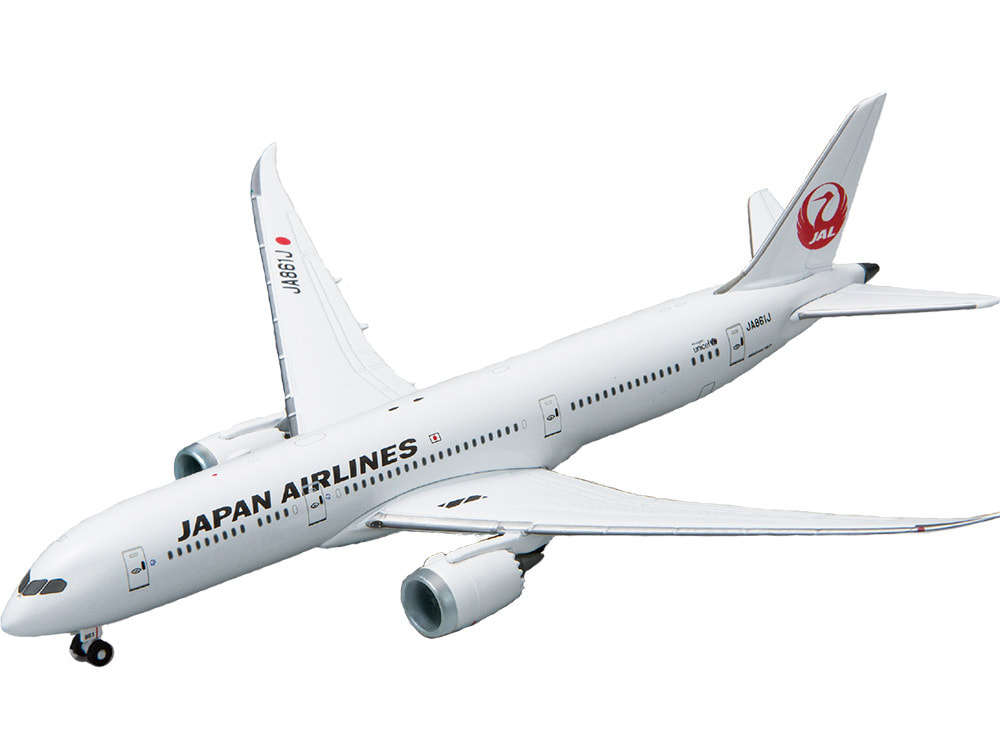 Comparing this model to other available 787s in 400 scale is clearly unfair but I'll do it anyway, as much to illustrate that it isn't as far away from them in some respects as you may think!
Comparison to Other 400 Scale 787s
Here is the Jet Hut model compared to the Gemini (Air France) and NG Models (China Eastern). The mould is obviously significantly inferior to the NG version but surprisingly competitive with the Gemini, which is also a cradle fit and has some odd wing levels of its own. It is the printing detail, engine pylon, simple gearhubs and lack of aerials which make the Gemini better. I should point out this Gemini version is not very old - dates from 2018 I think, whereas the NG is one of their earliest 787s too.

NG Models 787-9
Although the Jet Hut has very little detail on the underside it is hardly different to the old Gemini mould in that respect. The primary difference once again is the printing detail, although amazingly Gemini didn't print maingear doors on this model!
Gemini are hardly alone when it comes to being lazy on the underside printing. Look at this Phoenix example (Phoenix are notorious for leaving off maingear doors) compared to the Jet Hut. Which is the budget brand again?

Phoenix (left) : Jet Hut (right)
Conclusion
I don't think I'm being especially mean to the Gemini and Phoenix 787s when I say that they are no further away from the Jet Hut 787 than they are from the NG models and JC Wings 787s. It shows what can be done nowadays if you want to given that Jet Hut have made this mould on a shoestring and will not be aiming it at the standard collectors market. Yes, 400 scale hardly needs another 787, but it does need new young collectors joining the hobby, especially in developing nations, and this Jet Hut 787 looks like a good way to get them involved. Given they seemingly have around 30 moulds available good to go there is lots of room for this kind of model in the scale if they use their moulds correctly.