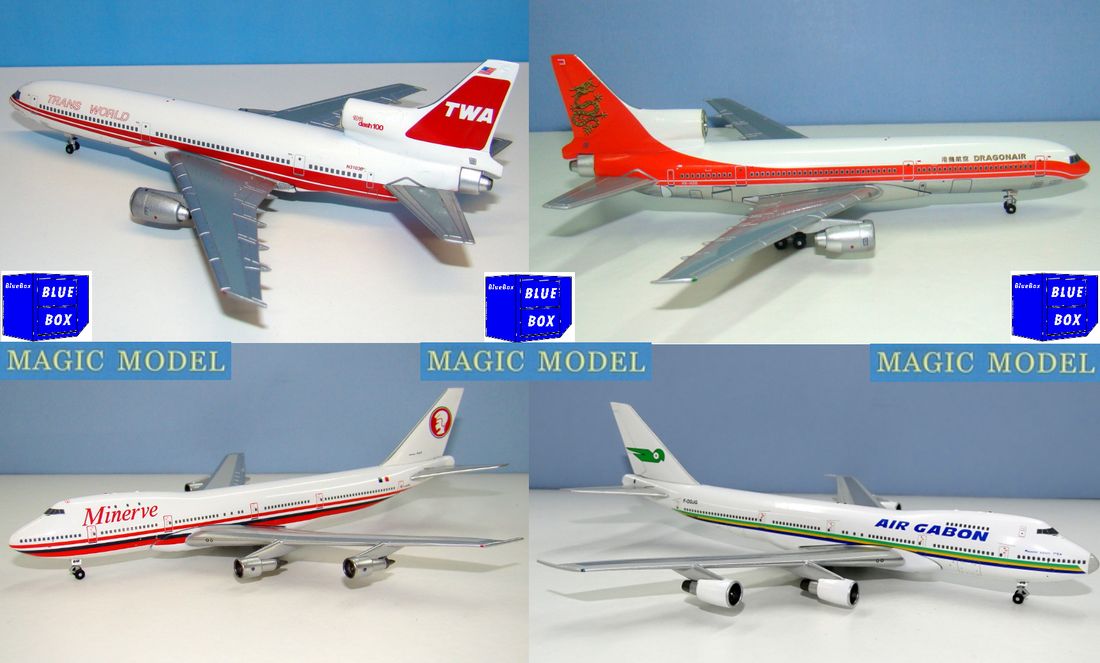 The early 2000s saw the appearance of a selection of new 1:400 scale brands that unlike the majority of the existing companies did not have any interest in connecting with the Western collector. Whereas Gemini Jets, Dragon Wings, Aeroclassics, SMA, Jet-X and Herpa all had to some degree known key people or active websites the new brands appeared to go out of their way to hide their true identity.

Blue Box British Airways Lockheed Tristar 1 G-BBAE - a 2006 release of 220 pieces
No doubt this was partly for legal purposes. Most of the major brands at times had dallied with sub-brands to get around licensing concerns, but the new brands and manufacturers took this approach to the logical conclusion. They did not communicate with collectors via the forums and websites. Instead the models were announced by retailers.​ 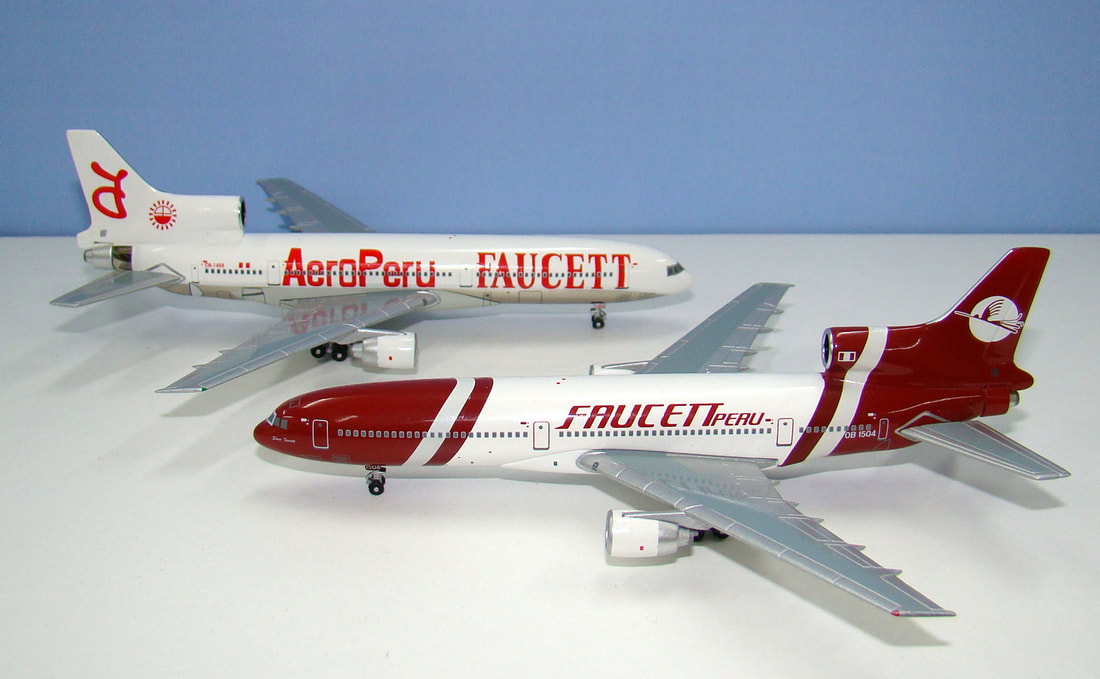 The lack of information at the time of release has meant constructing a real history of these brands is very challenging. Nonetheless it does seem that two figures were prevalent in the back story of many of these brands – Jimmy Wu and Johan Chan. Nowadays Johan Chan is behind JC Wings and is one of the largest manufacturers of diecast aircraft in the world (they make the models for Gemini Jets for example).
Of these brands the most well known was called Blue Box models – a suitably generic name. Blue Box first hit the market in 2005 with new moulds for the Lockheed Tristar and Boeing 747-100/200/300. The Tristars became especially well known and sought after, and in some ways notorious.
Below: This rare Magic Model Egyptair 747-300 is an absolute beauty (photo by plane737) 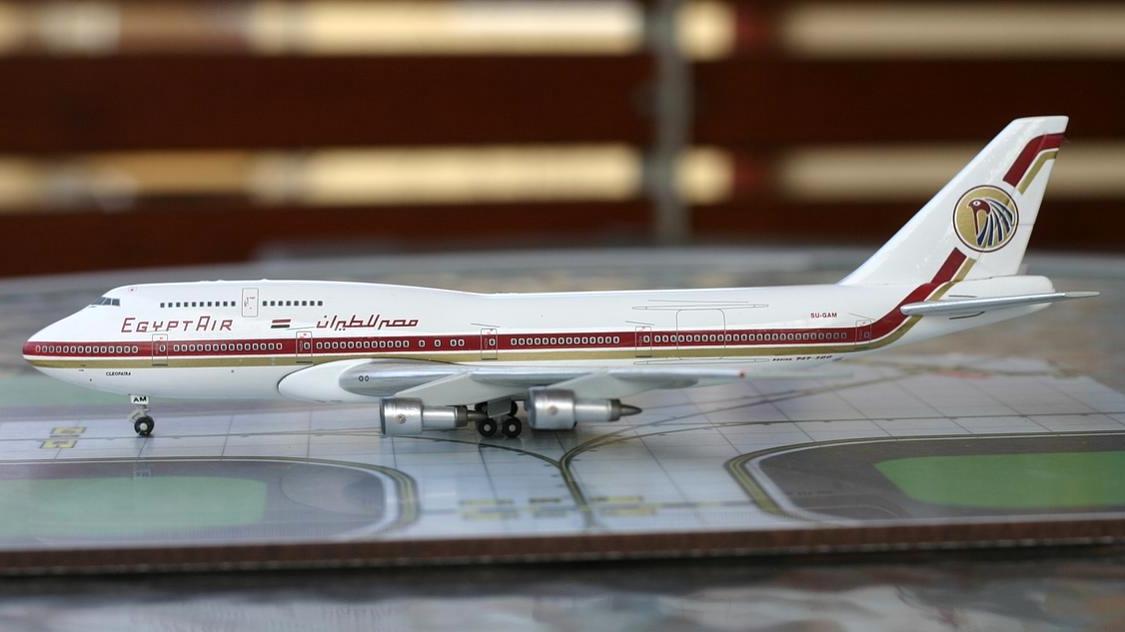 The Blue Box Tristar
Up to 2005 the L-1011 had been poorly served in 1:400 scale. Both Gemini and Dragon had moulds for the type but neither had made many models. Aeroclassics was making noises about producing its own L-1011 but the appearance of this new Blue Box mould seemingly ended their interest. It also appears to be the main reason why Gemini never re-engineered their Tristar moulds to make then Gemini Jets II style moulds without the rear seam. In effect the Blue Box Tristars effectively killed the prospect of more Tristars from others.

The Blue Box Tristar and Tristar 500 were not dreadful but likewise were not improvements on the existing moulds either. In fact, the moulds are inferior. At the nose the cone is too short and blunt. At the rear the #2 engine is slab-sided. The moulds best features were the well detailed undercarriage and the tailcone region.
The Blue Box Tristars typically came in boxes with a flip-top lid, like Geminis, and often there was an apron section under the model in the box. The models themselves also come with detachable engine covers – a feature never seen before or since.
Blue Box would go on to produce an impressive range of Tristars including many obscure and unusual examples such as Air Afrique, Chile Inter and Star Air. Production runs of the standard models ranged from 120-400, with 240 seeming to be a common volume. 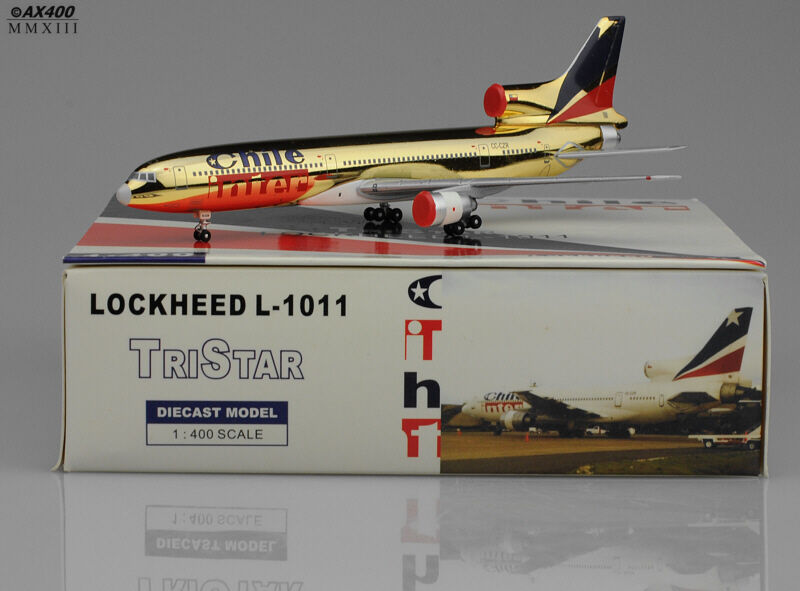 Odd Golden releases were a feature of Blue Box
There was also the odd fantasy model, such as a Continental Tristar, and many strange gold skinned releases. The latter were often made in very small numbers and look quite weird. I’m not sure why people would want them personally.
Tristar production under the Blue Box name ran from 2005-2008, although many models were not branded as Blue Box at all and even where they were the branding was subtle.
Boeing 747s & MAGIC 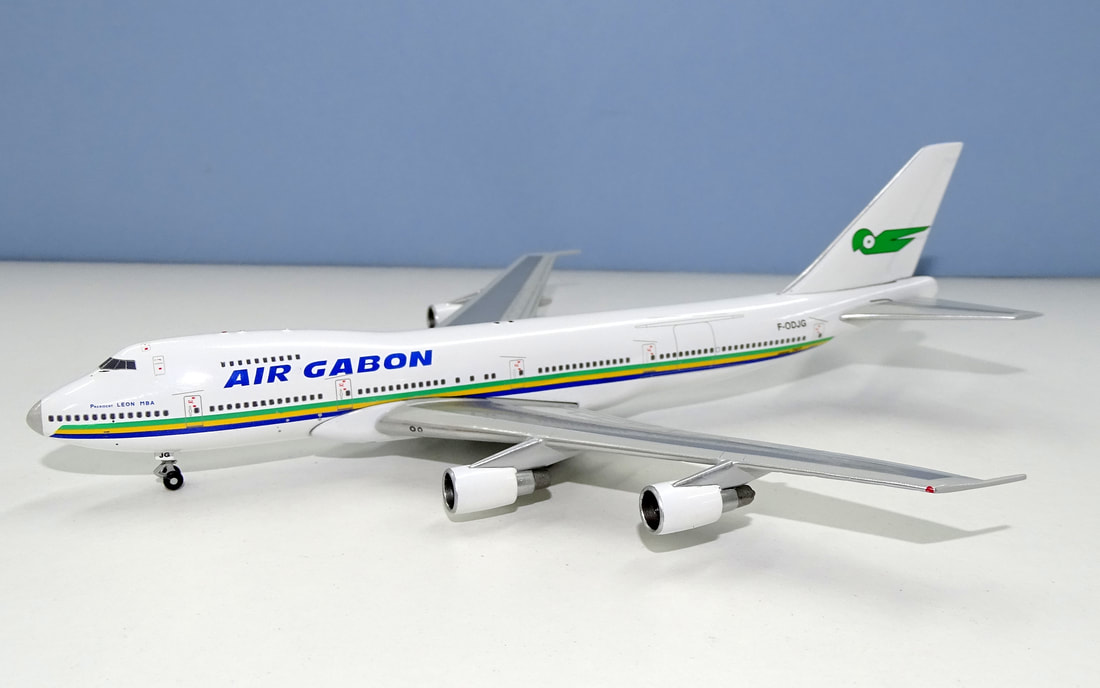 Above: Magic did release some impressive and unusual models. This Air Gabon 747 is a highlight of my collection
Blue Box also had a range of 747 moulds available. The 747 classic mould was not a direct copy of any existing 747 casting and had significant differences that made it readily identifiable. Although broadly the fuselage, wing and wing join region was similar to several other moulds the Blue Box casting is easily identifiable by several small bumps on the roofline of the hump and an obvious notch at the rear tail giving the rudder clearance from the fuselage. In detail the wing seams position with the wing itself is slightly different also.​
Below: Note the obvious bumps on the hump roofline that easily indicate the Blue Box / Magic 747 Classic 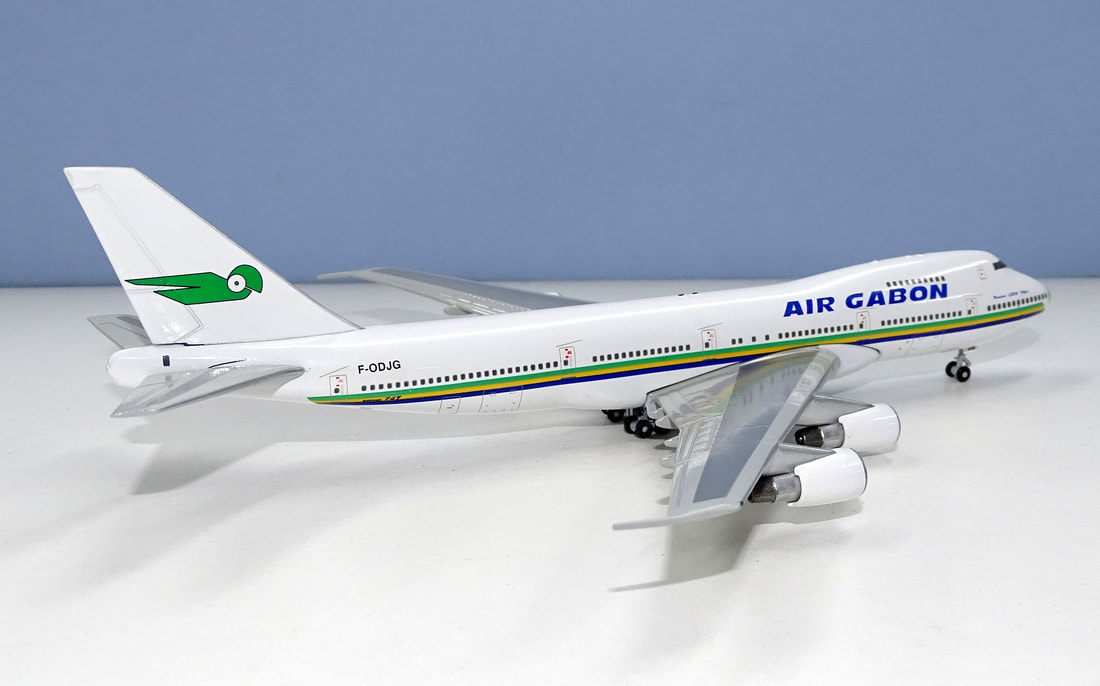 Blue Box started using the 747s in 2005, and made many in 2006 before usage under its own name ceased. The mould was also used by another brand known as Magic Models. They produced only Boeing 747s and Airbus A380s between 2005 and 2011. The Blue Box 747 mould appeared to last longer with Magic than with Blue Box proper. Magic Models also came with a unique large white plastic stand with a large M base.​

Even after Blue Box had morphed into Jet-X and was no longer using this 747 mould Magic continued to release models on it. 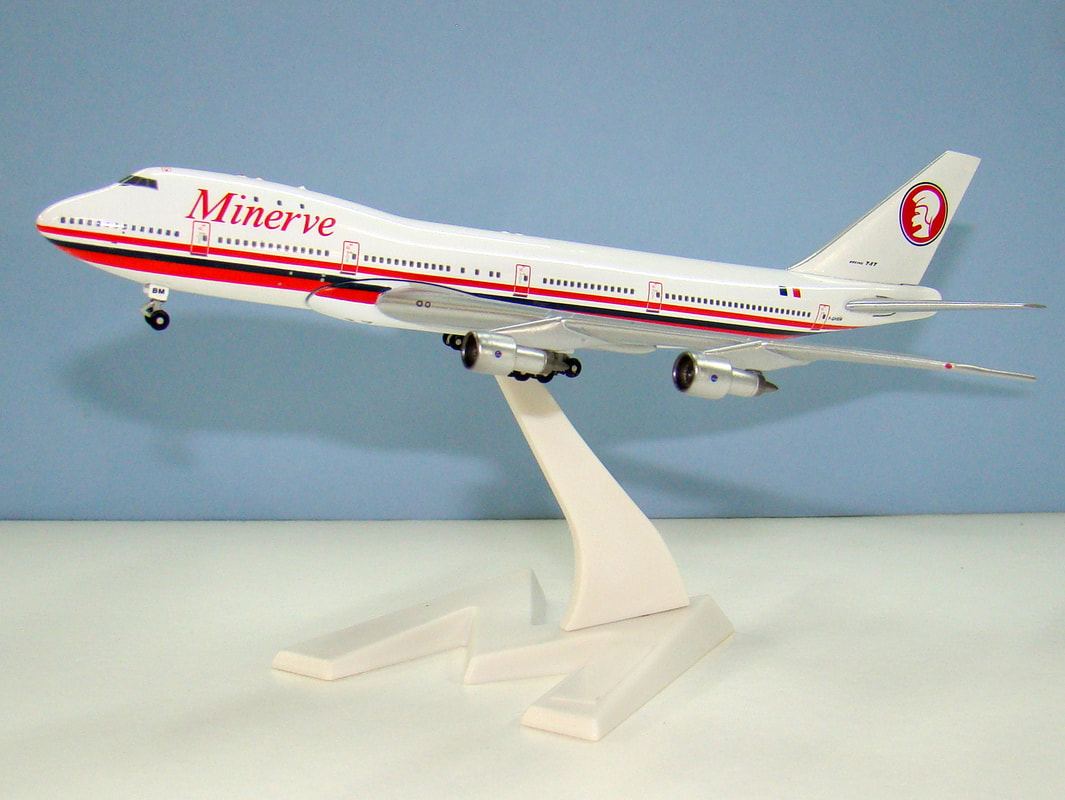 Bubbling
Above: Bubbling on a Blue Box Air Canada Tristar 500
Both Blue Box and Magic Models releases, especially the latter, are known for suffering from bubbling issues. Although not related directly to zinc rot the bubbling effect is widespread on both fuselage and wings of many models and has a similar effect of reducing their value and presentation. The bubbling is caused as I understand by poor preparation and cheap paint being used.
Below: Bubbling on a Magic 747
It is quite rare to find Magic Models especially that don’t have bubbling. Overall, most Magic and Blue Box releases are hard to find, partly because of the low volume releases and partly I suspect because many haven’t survived the test of time.
In my collection of over 2000 models I only have 2 Magic Models 747s and have at the most owned 5 or 6 Blue Box Tristars.​
A300s and A310s
Blue Box also produced new Airbus A300 and A310 moulds in 2006 but under the Blue Box name these were not widely used. The mould is pretty terrible and these models are not well known or sought after. The overall shape of the mould is poor, the nose is too pointy and the undercarriage too short. On some releases the engines appear to almost touch the ground.
Despite the mould's general poor form it would get continued use under the successor Jet-X brand. It appears that some releases came with a piece of GSE using the Dragon Wings style bus and truck.
Boeing 7E7
The other mould used in decent numbers by Blue Box is a Boeing 7E7 based upon the initial pointy nose and shark-tail look for what eventually became the 787. The models are a weird anachronism nowadays and I can’t really comment on them. They look like they didn’t come with undercarriage but did include a metal stand. Only 14 releases were made.
Other Moulds
The only other models produced under the Blue Box identity are a single Fokker 70 and Fokker 100. These are clearly the JC Wings mould and show that Johan Chan did have influence with Blue Box. They would only be used once but would reappear under the JC Wings line in time. 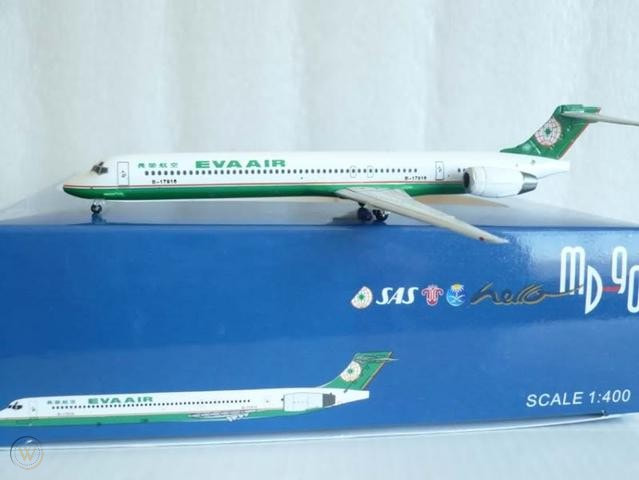 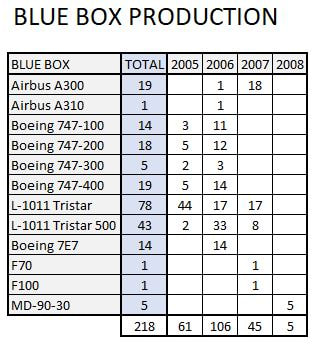 Note: From time to time in later years other brands (mainly Aeroclassics) have released models branded as BlueBox or such but they have no association with this version of Blue Box and are purely a licensing dodge.
The End of Blue Box
In 2005 Jimmy Wu had met Brian Wiklem of Jet-X and, after collaborating together on a new BAE-146 mould, in late 2006/early 2007 Brian sold his well respected brand to Wu. This signalled the end of the usage of the Blue Box brand as Wu's releases were quickly rebranded as Jet-X in 2008. From that point onwards Jet-X would be the surviving brand name, although with the appearance of a distinct JC Wings brand name in 2008 even the new Jet-X would not survive for more than four more years.
Blue Box and Magic are really just a footnote in 400 scale as most of their models were made on weaker moulds and have issues that stop them being in collections in 2020. Nonetheless they did produce some excellent and unusual releases, which mean if you have a large diverse collection you've probably got room for quite a few of them.

Blue Box are most famous for the Tristars, which served to kill any new Tristar moulds until 2019. Even with the appearance of the exceptional NG Models L-1011 I think it'll be sometime before all the Blue Box versions can be retired.