Many thanks to Brian Wiklem for answering my questions
In terms of combined individual model versions only four other brands have produced as many models as Jet-X and so it remains one of the most important brands in the scale. Albeit Jet-X is a company that has two distinct phases to its production. Initially Jet-X used other manufacturer's moulds to make its models but later it expanded to use its own and latterly under new ownership became part of the 'mystery meat' group of brands. In part 1 I look at the first phase.
Starting Out
​Jet-X was started by Brian Wiklem and his partner Vince Malta. As Brian relates:

"We decided that 1/400 was a hot new market we enjoyed collecting for, and we wanted to see about putting out a very limited, highly collectible product that would meet our requirements, and be well received by collectors.  Vince and I tended to be more classic airline collectors vs. the new liveries and airlines at the time.  So at the St. Louis International Airliners Show in 1999, “WingsUSA” was formed (tentative name) with plans for limited and ‘collectible’ aircraft." 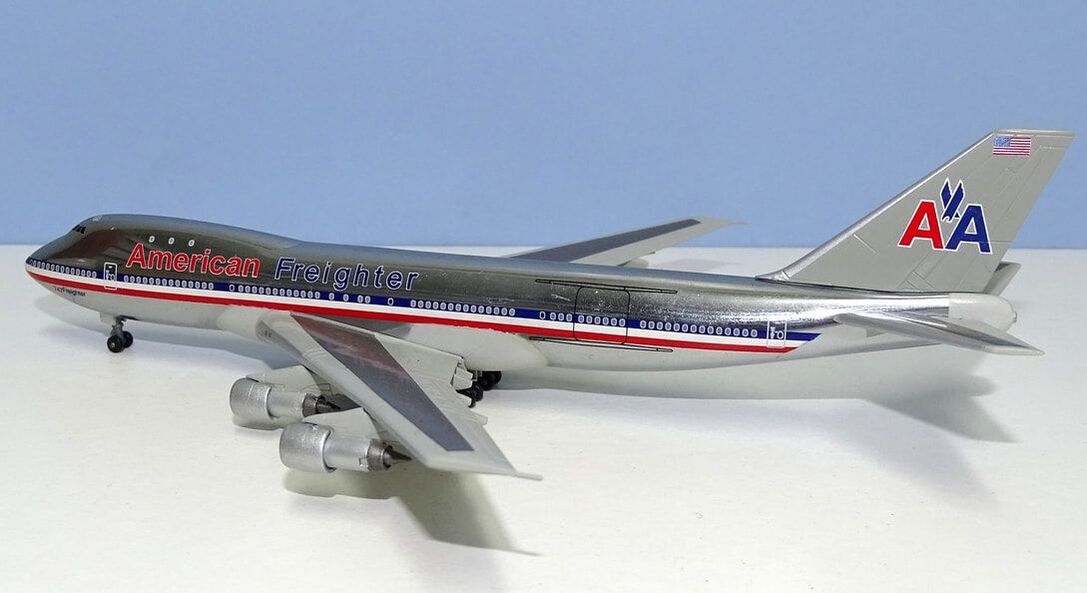 The Chrome version of the very first Jet-X release: JX001B
​Brian and Vince looked around for a manufacturer to partner with:

​"When we first started the business, we approached Herpa, Gemini and Dragon.  WingsUSA became Jet-X (for ‘jet-model experiment’, because what we were doing was an experiment), and our plan was to work with all the manufacturers.  All of them gave us quotes for proposed airlines, aircraft, and liveries.  Dragon saw my posts on the DAC forum,, and thought I was very objective and professional, and agreed to work with us.  Herpa gave us a quote as well, and Gemini the relationship was contentious because of Dragon (whom they just became embroiled in a lawsuit over the Pan Am trademark).  Gemini also originally gave us a quote for doing 7,000 models as our first release (Braniff 707 Jellybeans, 1,000 per color), but the cost was higher than wholesale to dealers.  Needless to say we ended up working with Dragon."

Jet-X used Dragon's MD-80 mould a lot for twinpacks
"WinAir was the first airline license we received, and that was one of the early planned releases.  But in the end, our first release was a ‘piggyback’ off of Dragon’s AA 747 release (we did the freighter version).  Moving forward, we piggybacked wherever possible because it would speed up releases, and allow us to reduce manufactured quantities.

Dragon was great with us all around, it was a wonderful relationship."

Above: Jet-X piggybacked off of Dragon release often such as this Continental Micronesia DC-10, which just required adding Micronesia to the titles of the Dragon release. This was JX003 - the third release from 2000.
A Couple of Electras
Jet-X would only make a single model in 2000 with Aeroclassics - a generation one PSA Lockheed L-188 Electra. The box calls it a 'Dealer Appreciation Model' so it may be it was never sold publicly. A second PSA L-188 was made for them by Aeroclassics in 2004 using Aeroclassic's second mould, but these were the only pair of Aeroclassics' made releases produced.
Dragon Production
Unlike that with Aeroclassics the relationship with Dragon blossomed. ​The focus was over 90% towards US based airlines using classic Dragon moulds like their Airbus A300, A320, A380, Boeing 707, 727-100/200, 737s, 747s, 777s, McDonnell Douglas DC-10, MD-11, MD-80 and Lockheed L-188 Electra. Some of the early boxes distinctly show the Dragon logo on them with only small placement of the Jet-X brand. 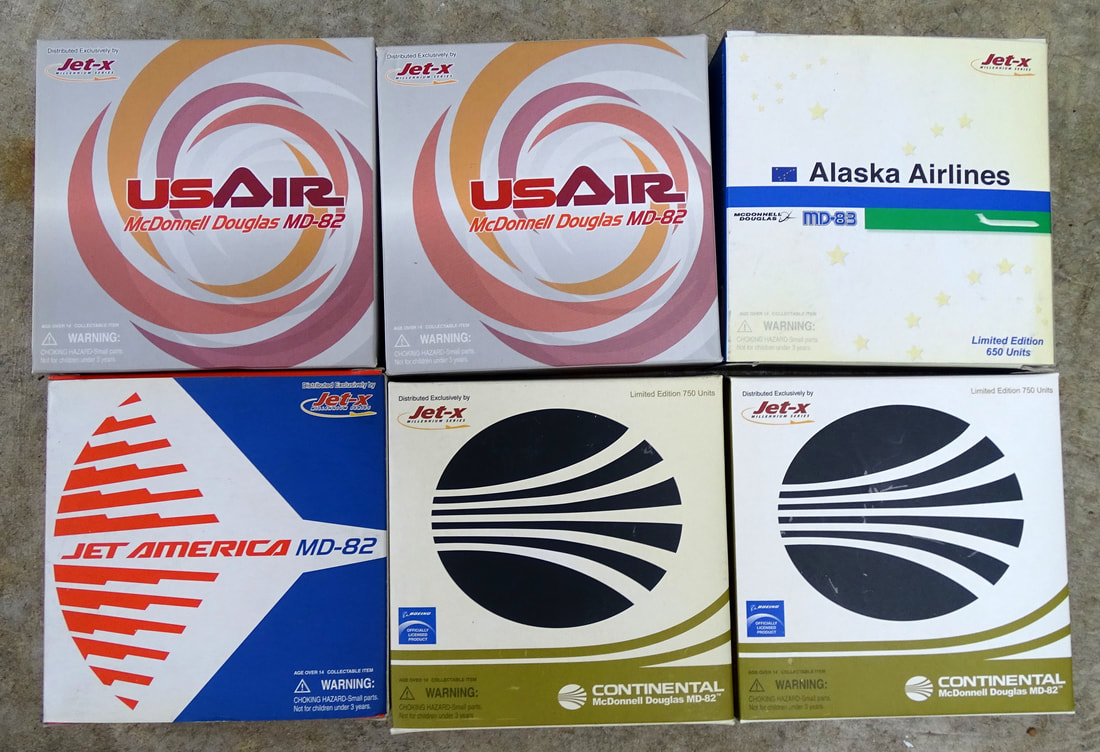 Outside the USA - Aeromexico, Eva Air, Laker, Lufthansa, Mexicana, Saudia and Varig featured. Of these Eva, Saudia and Mexicana were the most popular.
​There were often sequences of models made with minor livery variations, for example 7 Piedmont/USAir 767s, and some models were exclusively made for the Jet-X Club. with smaller production runs.
​Braniff Love
One peculiarity of Jet-X was its penchance for fantasy Braniff models. In 2002 a series of Jellybean Airbus A380s was produced. These were followed in 2004 by Jellybean Concordes and 747s. I asked Brian about this and he said:
"When Dragon announced the A380, Vince and I said “wouldn’t it be great if we did one” and I threw out “imagine if Braniff were still around and they bought the A380?”  So I came up with the A380s and the colors, and thought “will collectors really pay anything for super limited models even if they were fantasy?”  That’s where the black and chrome A380s came in.  We were universally criticized both by collectors and retailers, all of which claimed “we’ll never buy them.”  What happened?  When we offered them for sale, all 2200 models sold out in 6 hours.  It was our fastest selling model ever in Jet-X history (and you could only get 1 black and 1 silver based on ordering all the other colors).  Of course retailers and collectors complained about the limited black/silver, but the irony is they only wanted those colors because they were limited, not because they were desirable. "​
"After the A380s, we decided Dragon’s BI 747 was terrible, and the Gemini one with the tail seam and the engine pylons didn’t look right, so we’d do the same thing with the 747 as the A380.  Unfortunately, the 747s essentially bombed, terrible seller.  The Concordes actually did very well.  The L-1011s were released after I sold Jet-X to Jimmy Wu and I don’t have sales figures on that aircraft."
The Jet-X Club
"We set up a club to do even more exclusive versions, and to generate some extra revenue for Jet-X.  In honesty we were using the club as a revenue generator.  Jet-X was at best slightly profitable, but originally it was set up to break even (and models Vince and I kept in our collections, eventually selling later on, that’s where we planned to profit)." 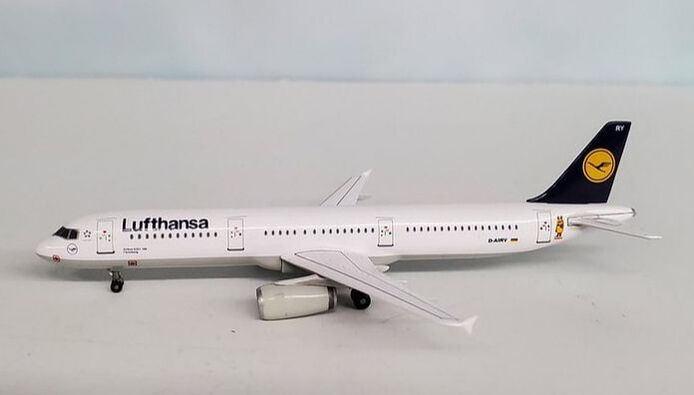 'Die Maus' JXM119. Photo from the collection of Denny Payne
"We often used it to sell aircraft that were subtly different than a Jet-X (or Dragon) release.  Like the Lufthansa A321 Dragon was going to release, we found the one with the special livery mouse near the rear door (Die Maus), and produced like 200 for the club because it was a piggyback on the Dragon release.  Any model that was a piggyback that we weren’t confident we could sell more than 200-250 units became a club model. I don’t remember the number of club members off hand, but it was enough to sustain the club releases."
Mould Usage During the Dragon Era
As Jet-X used Dragon’s moulds and factory the models matched those of Dragon in terms of quality. Some of the moulds were very good (727s, 747s, MD-80s, DC-10s) and still stand up to modern scrutiny whilst some, especially the Airbuses and 737s, do not. Nonetheless the print quality was good, albeit of the time. Obviously as with Dragon the undercarriage could be removed and the wings and fins were plastic not metal. Below are a selection of my favourite Jet-X models:
​Brian famously made a Youtube video in 2006 critiquing what he saw as the anal retentive-ness of collectors. It was meant in jest!

Chrome finish American Airlines Boeing 727-23 from the collection of Doug Seeley
Sometimes Jet-X would release both Chrome and Real metal finish version of the same model - as with the two pairs of American 727-23s (JX-009A/B and JX-010A/B). Many of the 727s and MD-80s were completed as twin-packs. The Braniff 707-138B Jet-X Club release even got a quad-pack. 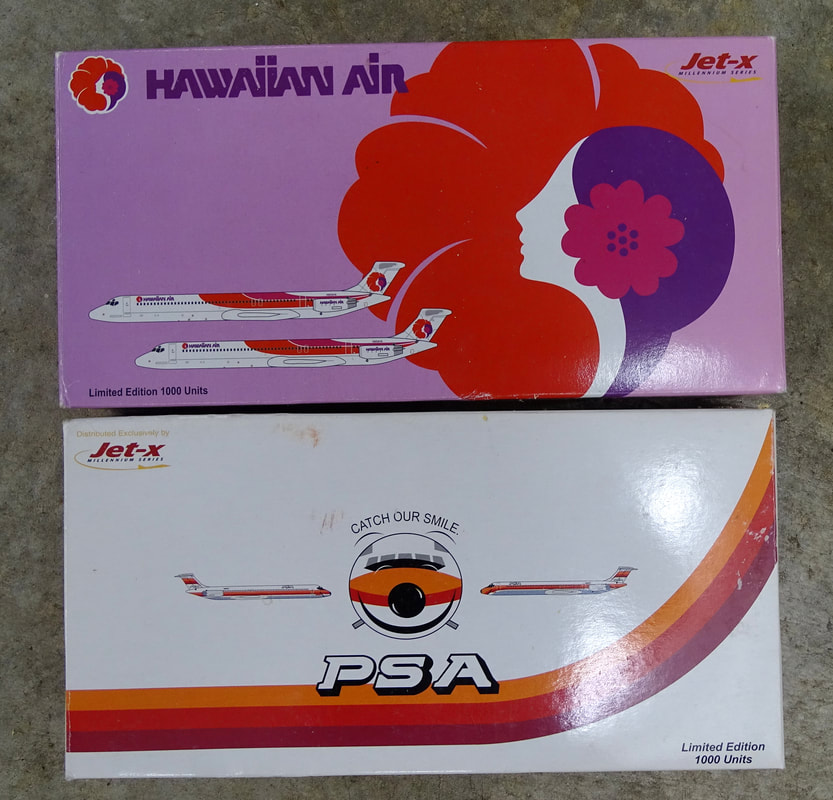 The releases that are probably the most sought after nowadays are the fine Dragon mould 747s, DC-10s and MD-80s. The Hawaii Express DC-10s in particular have not been made by anyone else and still sell for decent $. It was these three moulds, plus the 727s, that saw the most usage. 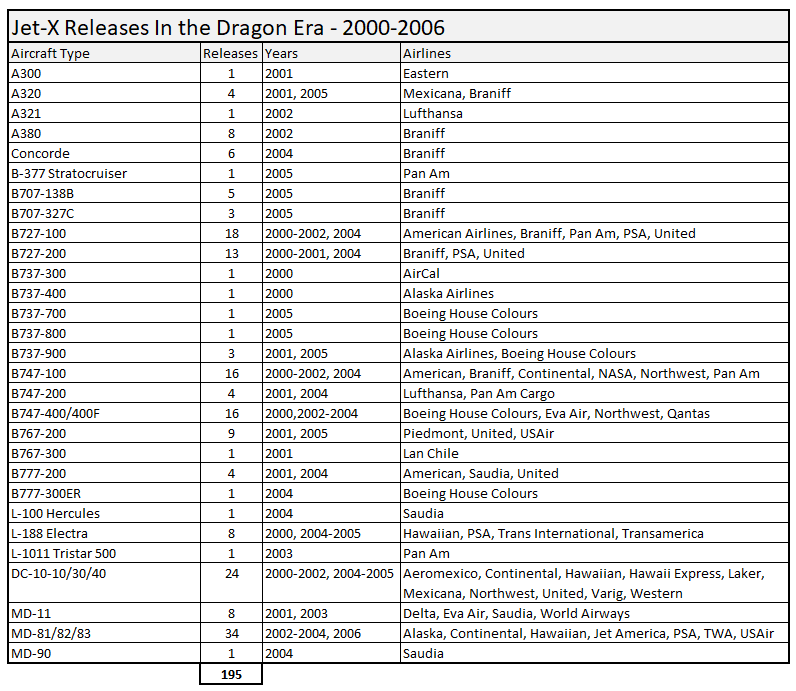 Boeing House Colours
During 2004 Jet-X made a particularly fine line of Boeing House Colours models - 8 747s and a single 777-300. The 747s are very nice examples. The below photos are from the collection of jumbee3!. The equally nice NASA 747 dates from 2002:
Break with Dragon
Dragon releases continued in 2005 but in 2006 only a few models using Dragon moulds (all MD-80s) were released and Jet-X took a new direction. Partly this was because as Brian puts it: "Dragon began to pull back on aircraft releases and the hobby was becoming flooded with all the companies making 1/400 models.". Additionally Brian had met one of the principles of Blue Box Models - Jimmy Wu. Together they would develop their own new moulds at first, and then Jimmy Wu would take Jet-X off in its own direction. This will be explored in part 2 of the history of Jet-X.
References