Following on from my look at the new NG Models Boeing 777-200 mould sample I now turn my attention to the series 300/300ER, which completes what I assume will, in time, become known as the 777 Classic lineup. Whereas the series 200 is an area where the number of modern moulds is low the series 300ER, at least, has multiple modern moulds available and competition is intense. Even with the type leaving production in the real world it is still a major fleet component for world airlines and if you are trying to become the largest manufacturer in 400 scale, as it appears NG Models are, it is a type you simply can't leave out, as much as classic collectors would like to disagree.
EXISTING MOULDS 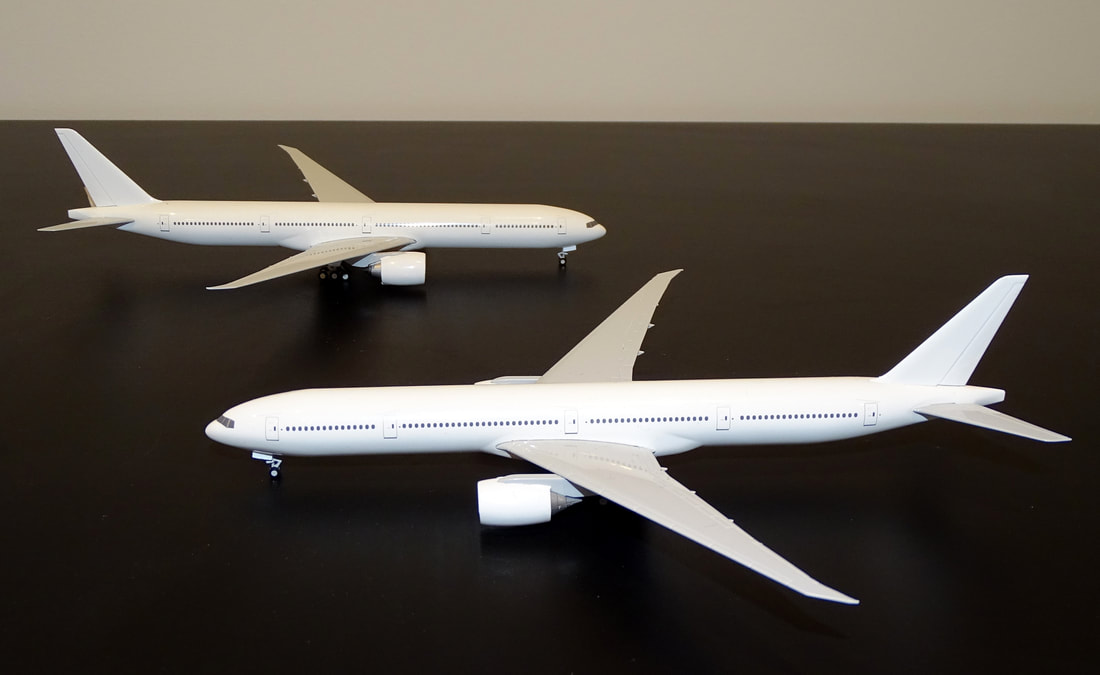 Once again the creation of a new 777-300 is a real statement of intent to compete head-on with existing manufacturers, and due to the number of moulds available, on a wider front. I have looked at the series of 777-300/300ER moulds previously in my mould review:
Boeing 777-300 Mould Review 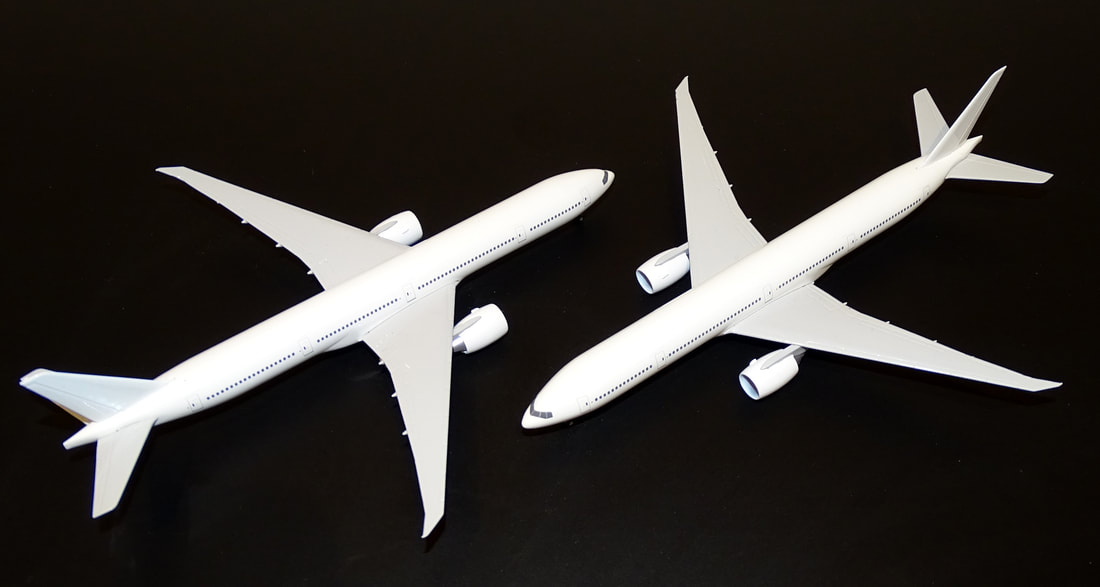 Of moulds no longer in production the Witty Wings / Apollo mould is easily the best but accounted for only 18 models. The older Dragon Wings, Herpa, original Gemini version and first JC Wings mould account for around 100 models so the bulk of releases have been made in the past decade on newer moulds from Phoenix, Gemini, JC Wings and Aviation400.

​I have covered the newer existing moulds in a lot more detail in my detailed scoring comparison, which saw the new JC Wings mould triumph over the new Aviation400 mould by a small margin:
Boeing 777-300ER Detailed Mould Scoring Comparison

It is the Phoenix, JC Wings and Aviation400 moulds that this NG Models version will be judged against in the market and considering that the last two of those date from 2016 and 2019 the competition is strong.
THE MARKET 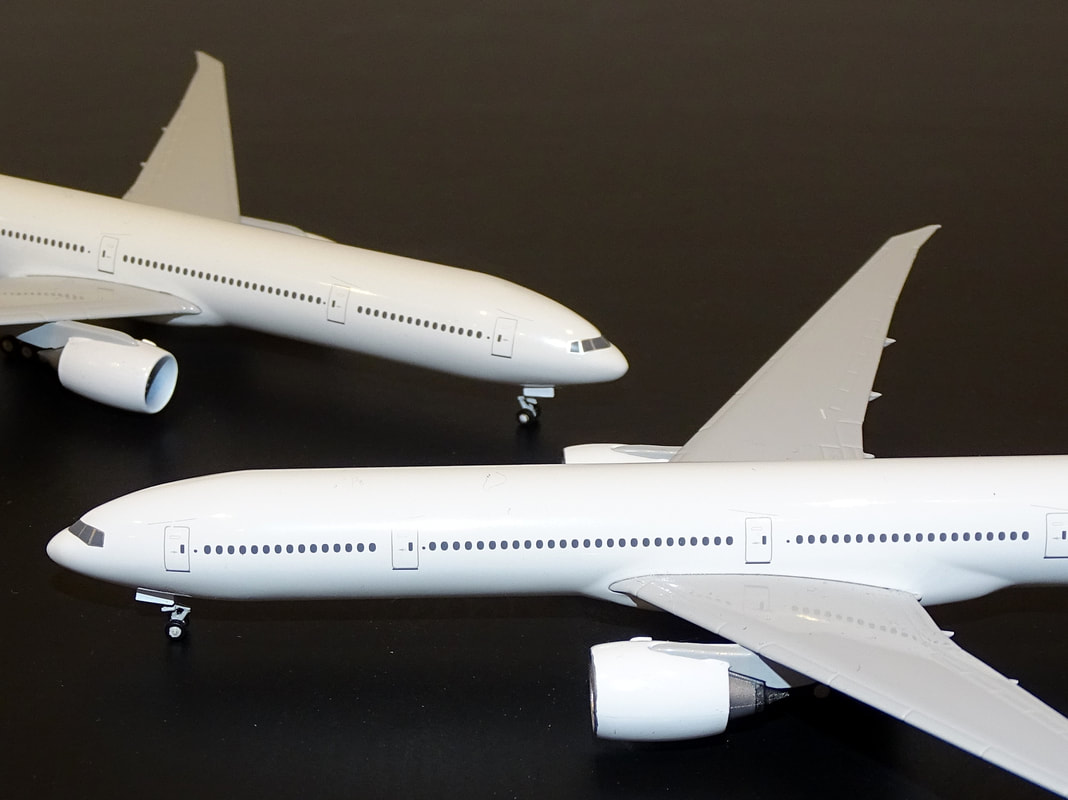 Gemini Jets still sometimes uses its old cradle-mounted 77W mould but has also utilised the new JC Wings mould recently, however Gemini actually produces a relatively small number of long body 777s since they make up such a small portion of the North American fleet. It is instead JC Wings itself that produces more 77Ws to cater for its favourite Asian carriers. Likewise Phoenix is prolific with its long body 777s, while Aviation400 has been producing a steady stream of very nice 777-300s itself. Both JC Wings and Aviation400 suffer from delivery delays regularly while Phoenix in reality just isn't producing models up to the standards of the others.

Even so, that means there are a lot of modern 777-300/300ER models that have been made recently featuring modern additions such as rolling gear, aerials and hollow engines. Aviation400 alone has made 33 in the past two and a half years and those of course also feature the jewel light nav beacons. 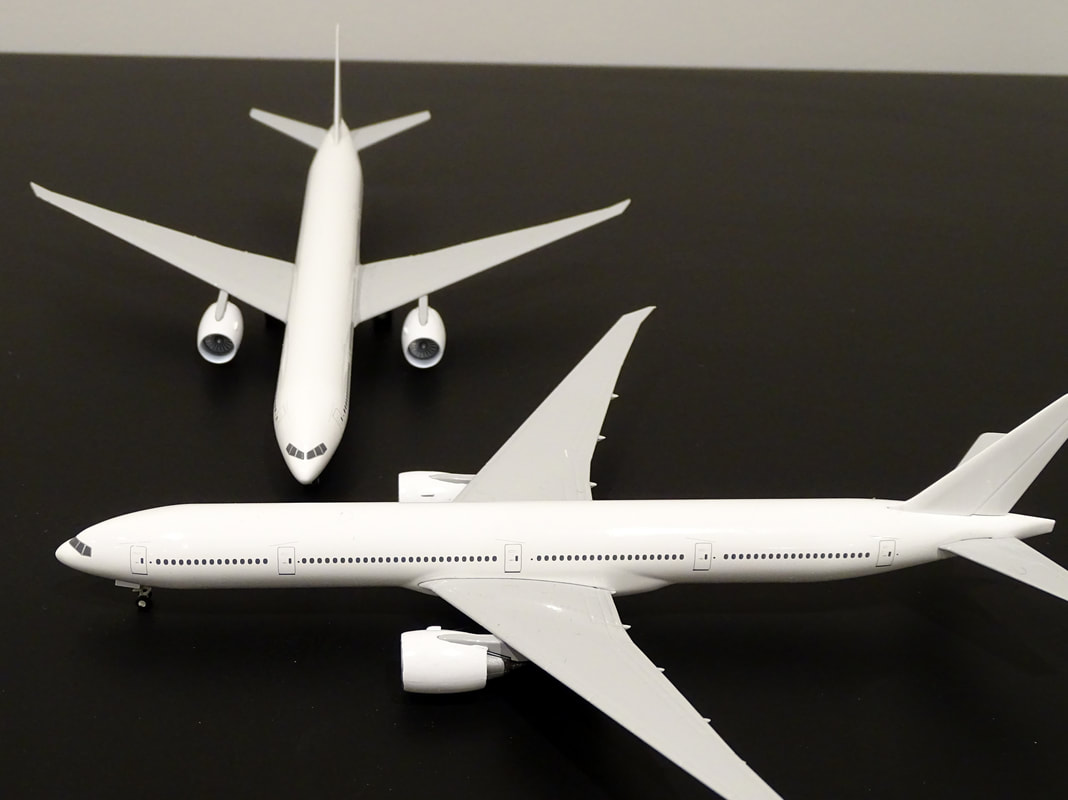 I suspect that the vast majority of 777-300/300ERs have been made and a cursory check of the DiMA database shows me 25 Singapore Airlines examples, 14 Garuda Indonesian examples and 18 KLM examples (admittedly these aren't all in the same liveries). Anyway I'm sure there are some obscure examples still to be made and if NG can bring the sort of quality they have to date then they may be able to tempt people to replace older versions.

The pair of 777-300ER sample moulds I have been gifted by NG have the longer wings of the series 300ER and wear different engine options to the series 200 samples (in this case the GE90-115B and the Rolls Royce Trents). This of course means that taking the various wing and engine combos it should be possible for NG Models to make any 777 'classic' combo from the original A model 777-200 through the 777-200LR and freighter to the 777-300ER via the original 777-300 itself.

Boeing 777-300ER with GE90-115B Engines
Broadly as you'd expect the 777-300 samples largely mirror the series 200s in many details, which means they have the same positives and negatives as discussed in the 777-200 series sample review. Aside from the stretch in fuselage length the fuselage is the same so although having a good nose shape and excellent central region the area above the cockpit, vertical stabiliser and tailcone need more work. Likewise the nosegear has the same pluses and minuses.
Looking at the maingear and the version with the GE engines has the same gear as the series 200s, albeit it is the correct gear now for a series 300ER. The sample with the Trents however has the gear that looks like it should have been attached to the series 200s and lacks the hydraulic actuator attaching to the forward part of the bogey. From what I can see this is also the correct gear for a non-ER series 300 too. 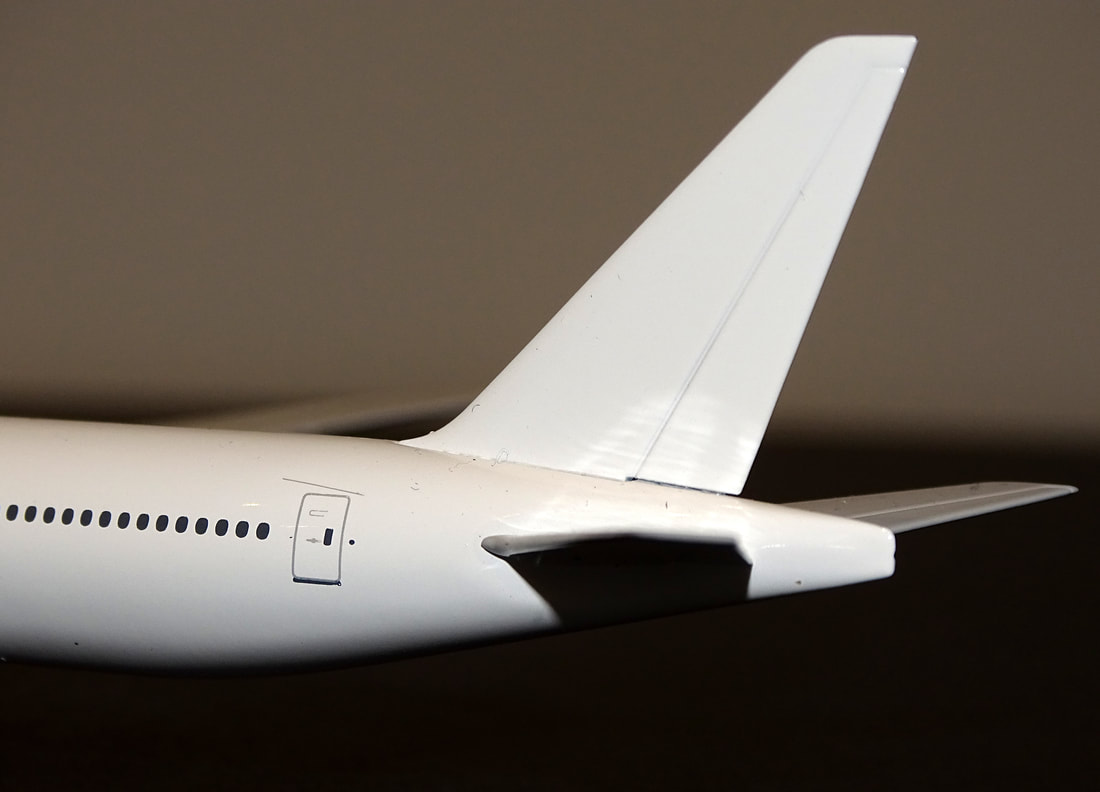 A note of interest with the series 300 samples is that they lack the tail skid under the rear fuselage. This was a feature of all 777-300s, and those 300ERs built up to around 2014 or so. Afterwards it was eliminated when software improvements rendered it unnecessary. As later series 300ERs don't have it technically it is not an error however its absence does stop NG from modelling all series 300s and earlier 300ERs 100% correctly.  I would love to see a version of the mould with it added in but understand why that might not happen. 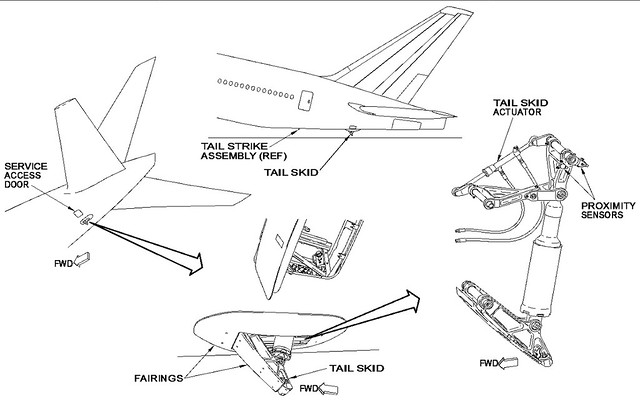 Below: Upgrades to the 777 deleted the tailskid and introduced a divergent trailing edge at the wingtips, whatever that means? See below for wingtip discussion. 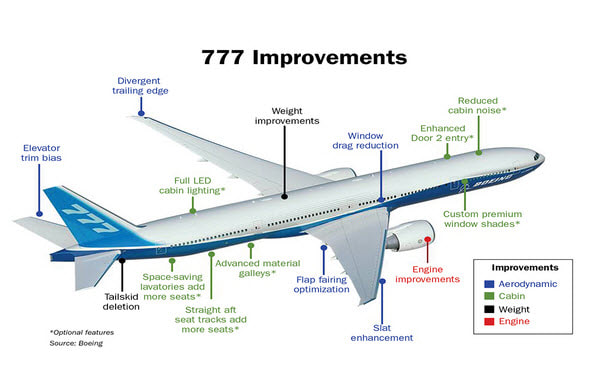 Looking at the wings and both the samples feature the modified wing of the 777-200LR/200LRF and 300ER with the raked wingtips. At distance it looks like the wingtips come to a point (see right photo) but in close up you can see that the end of the raked tips is horizontal to the fuselage line (see left photo). NG's version shows that detail well and they have very fine, and to my eye, accurate lines. I should point out here though that improvements to the 300ER around 2015 introduced a 'divergent trailing edge at the wingtip'. I'm not sure what that means but it might be possible there are two forms of the wingtips. Can anyone provide me with more details here? 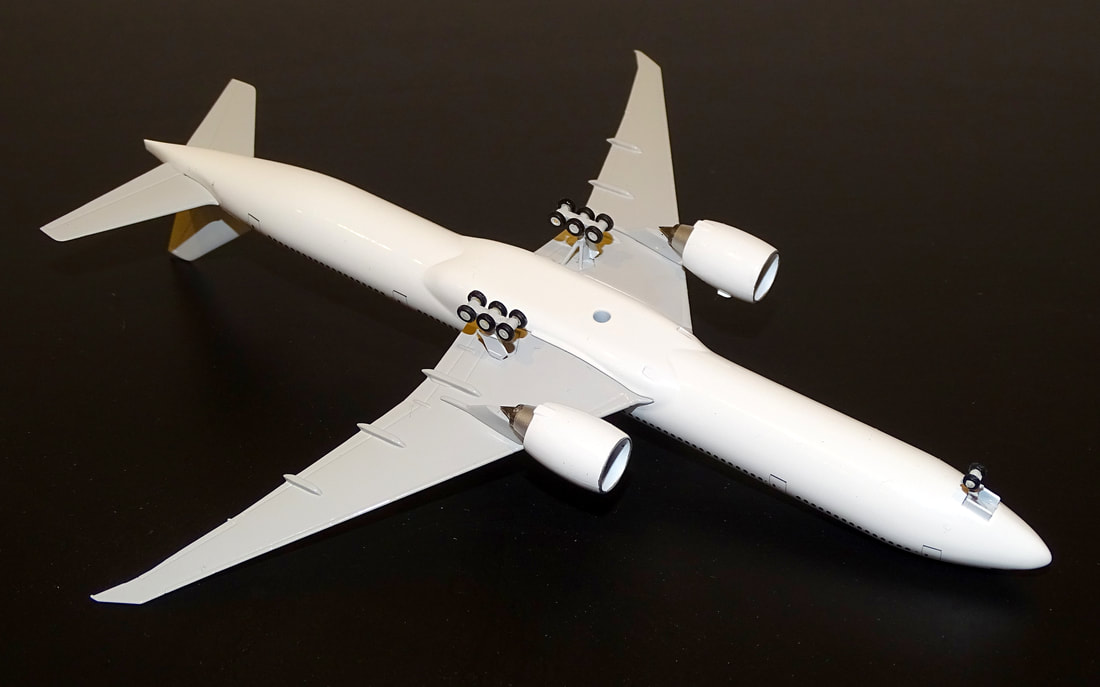 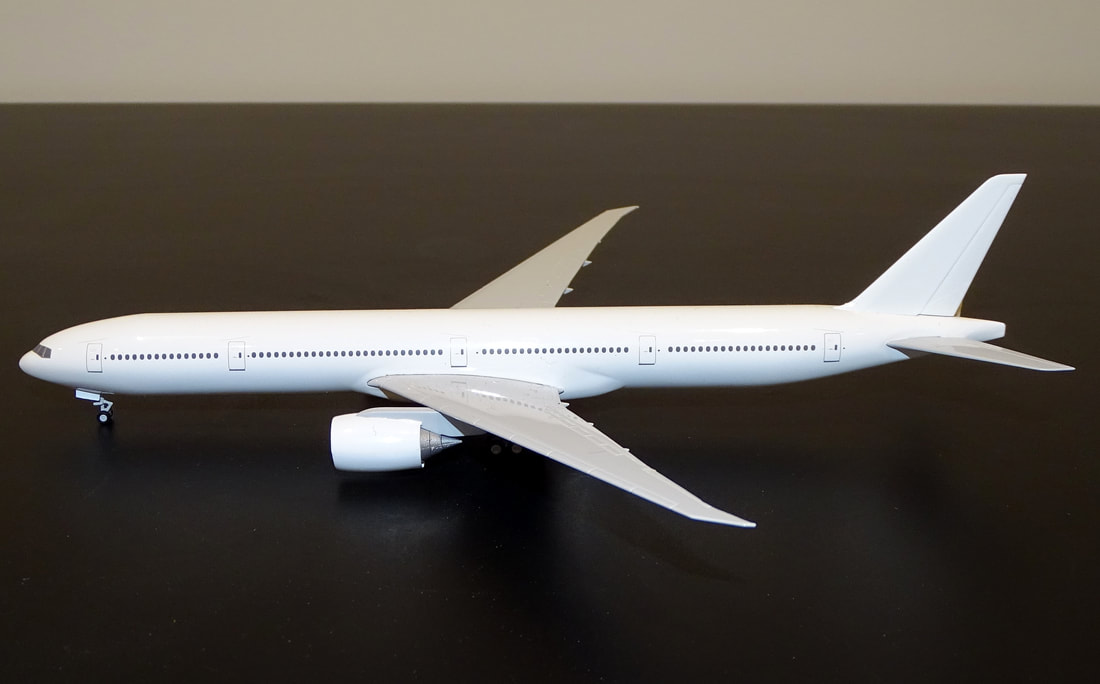 A few days ago I was pointed to this excellent view of the 777 engines and pylons (thanks Ahmad) so I will refer to it for looking at the engines on the 777-300ER samples: 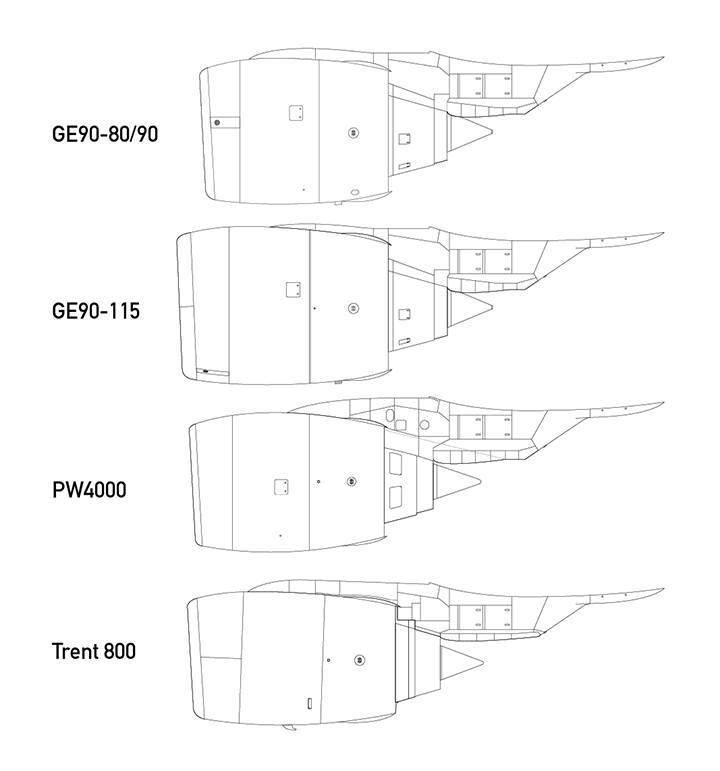 General Electric GE90-115Bs
As you can see above the later GE90-115 is significantly larger than the earlier GE90-94B which necessitates a longer nacelle and one that is wider to accommodate the greater fan diameter. Comparing the two samples side by side and the GE90-115B on the sample is correctly both wider and longer than the 94B. It also has the pylon joining further back on the nacelle as it ought to and has the correct curvy fanblades of the engine (unlike the 94B which should have straighter blades). Overall this to me looks like a great rendition of the larger GE engine.
Rolls-Royce Trents
The RR engine option is noticeably smaller in diameter than the GE90-115B and has a more marked angle at the inlet. Both these features are present and correct on the sample. Once again I like the form of the engines from the side and the pylon attachment and overall shape.
From the front the look of the engine is good and the fanblades have the right form, aside from one fairly major point. To my eye they are the wrong way around. the curve of the blades looks the opposite of the photo above of the real thing.

The series 300/300ER samples look as good as the series 200s, which I guess is a mixed blessing considering the amount of rework required. However the basis of the mould is sound and aside from the fuselage above the cockpit I think most of the rework is minor. In terms of this particular variant additional changes to the sample not on the series 200 are as follows:
​
I do think the windowline position looks a little better on the series 300s as well but it is probably still a little high.