All model photos are courtesy of Chris Ivins and used with permission. Thanks Chris. 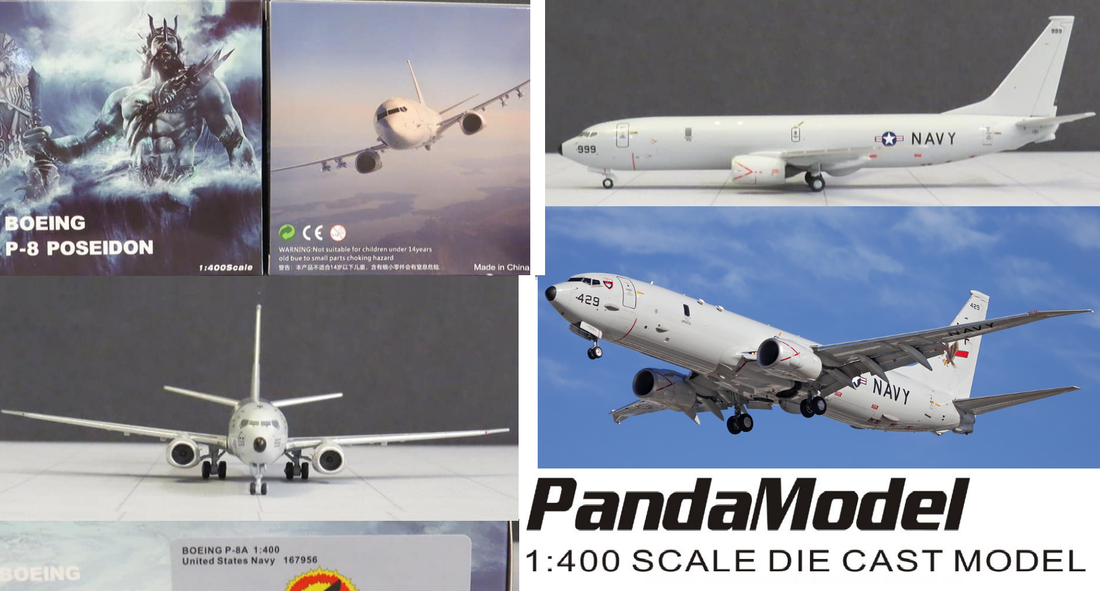 The P-8 Poseidon is a militarised Boeing 737-800 designed to replace the venerable P-3 Orion in the wide variety of maritime roles that the type has performed since the early 1960s. These include anti-aubmarine warfare (ASW), anti-surface warfare (ASUW), shipping interdiction, search and rescue, and fisheries protection roles. The design uses the fuselage and wing of the 737-800 but with new raked wingtips rather than the typical blended winglets of the 737NG. The other major differences are of course the many aerials and added lumps and bumps typical of military surveillance aircraft, plus a ventral weapons bay. Lastly to power the extra onboard electronics a new 180kVA electric generator has been added to the engines requiring a redesign of the nacelle and pylon. 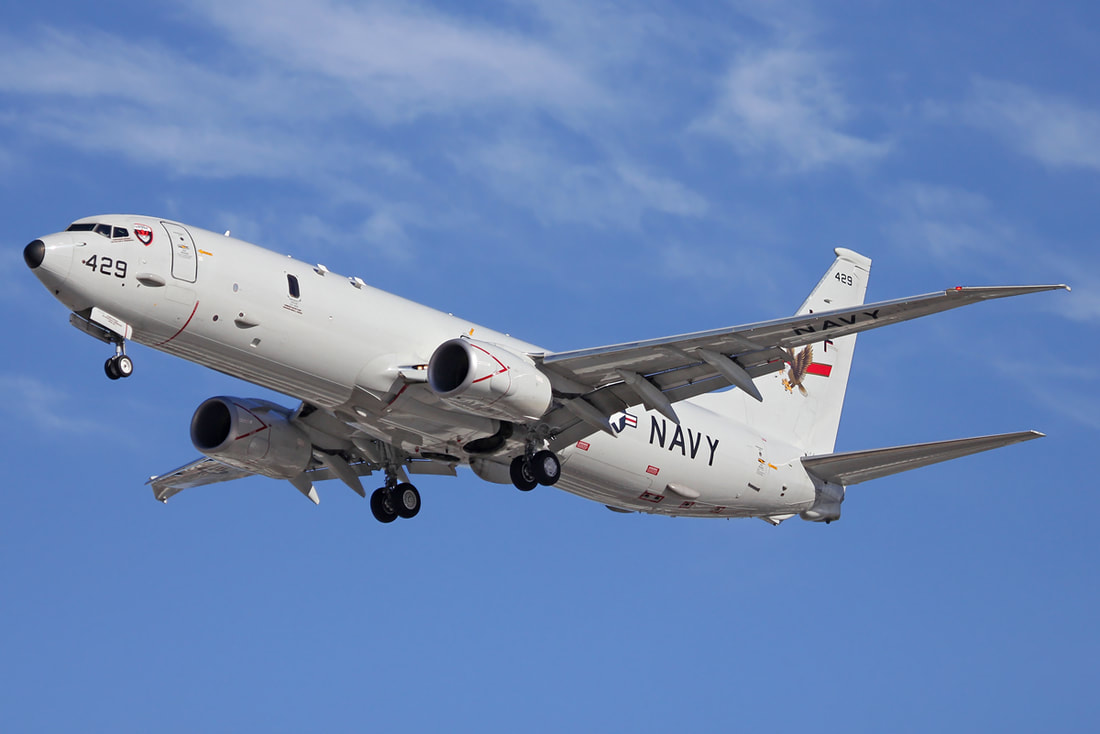 Darren Koch [GFDL 1.2 (http://www.gnu.org/licenses/old-licenses/fdl-1.2.html) or GFDL 1.2 (http://www.gnu.org/licenses/old-licenses/fdl-1.2.html)]
The first P-8 Poseidon announced in 1:400 Scale was by Panda Models in early 2020. Subsequently Gemini Jets have also announced their own P-8. The Panda Models version has just hit the stores and so that is the model this review will focus on.

YSSYguy at English Wikipedia / CC BY-SA (https://creativecommons.org/licenses/by-sa/3.0)
Panda Models P-8 Background
So far in the whole of 2020 Panda models have announced only 22 models and delivered between 7 and 10 of them. That isn't a good return from a manufacturer that in 2018 was prolific. 2019 was an odd year for Panda but the release of the excellent Tu-134 recently has suggested that they are still capable of producing the highest quality. ​
I have discussed Panda's unusual behaviour of recent times before, see this post for more details, so I won't cover it again. Back last November they showed off some images of their new 737-800 mould's wing. They had retired their earlier 737-800 in April 2019, despite it being the 2nd best mould. Little to nothing was seen or heard of the newer 737-800 since the wing shots appeared, until now at least. 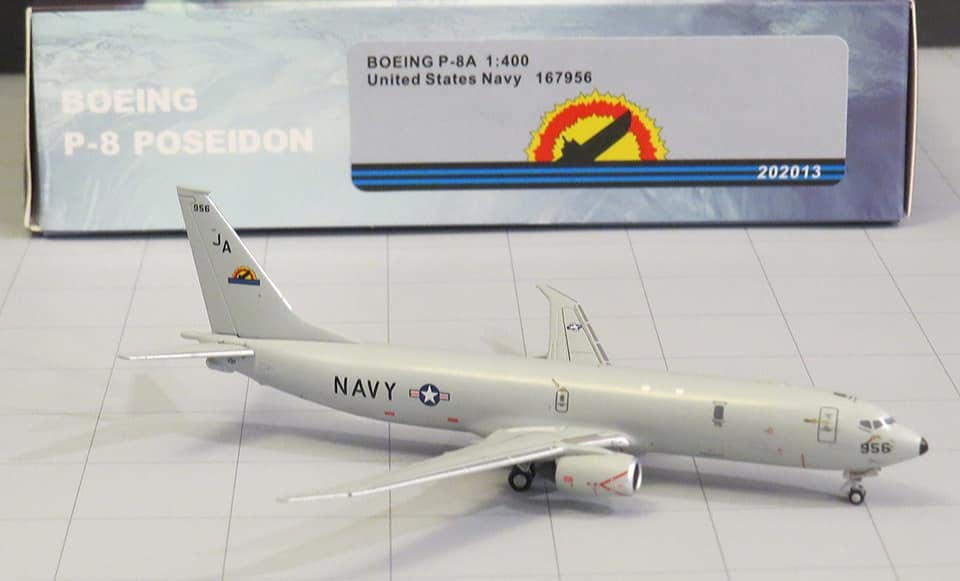 It was therefore a little surprising that Panda announced the P-8 since this variant can't use any of the wings that Panda showed off in late 2019. The assumption was that Panda would use their new 737-800 mould suitably modified to be a P-8 and this does appear to be what they have done, to a degree anyway. 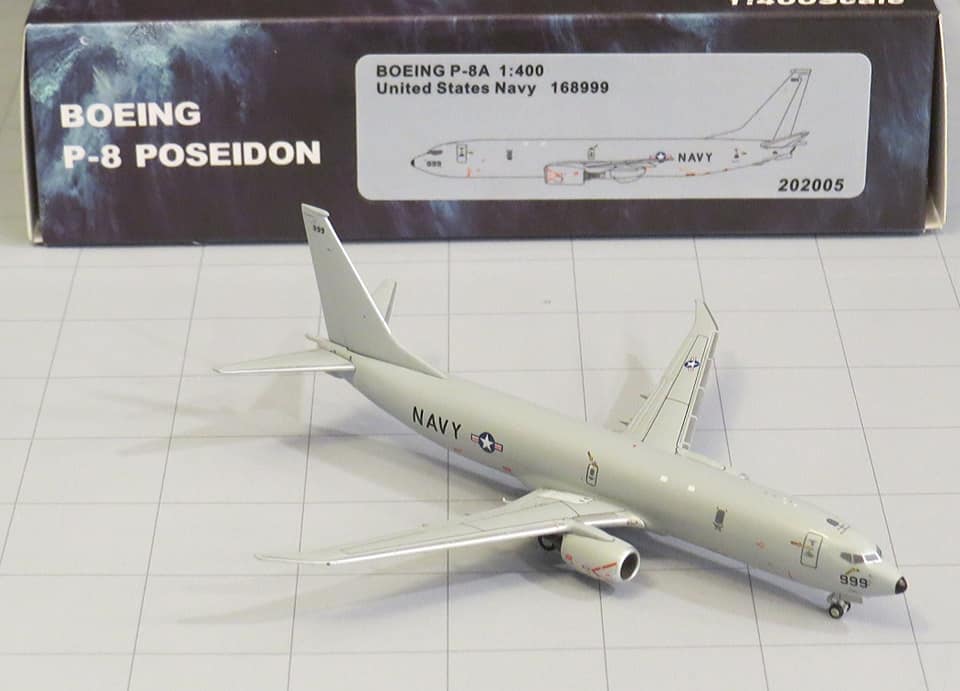 Panda have announced a trio of P-8s (2 USN and 1 RAAF) and at least the two American versions are now available, at least through Eztoys anyway.
The Panda P-8 Poseidon Mould
PART 1: MILITARY ADDITIONS
It is immediately obvious that while Panda have modified the basic 737-800 they have not gone the whole hog. This contrasts heavily with the detail and effort that AV400 recently put into its A330 tanker transports.

By my count the model is missing at least 13 aerials and bumps on one side alone. Some are printed on but are not in relief. Missing elements include the extra bump on the side of the engines housing the new electric generator.

Missing elements circled in red
Greater effort is made at the rear of the mould with a modified tail top and tailcone.
On the underside the large dome just behind the wings on the ventral centre-line is present and the weapons-bay doors are printed. You can also see that the wingtips are correctly raked. 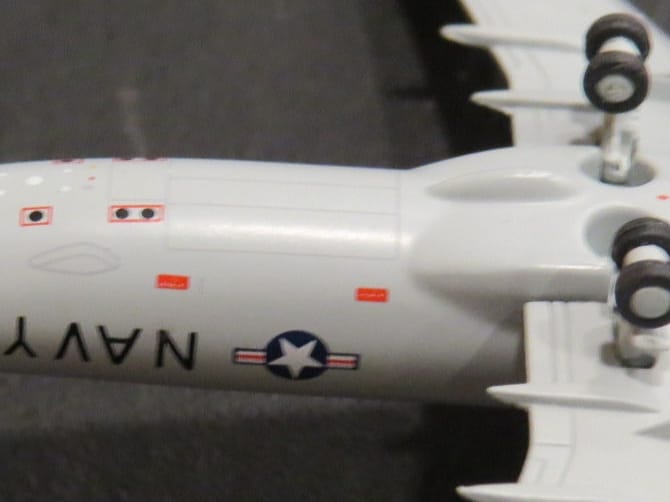 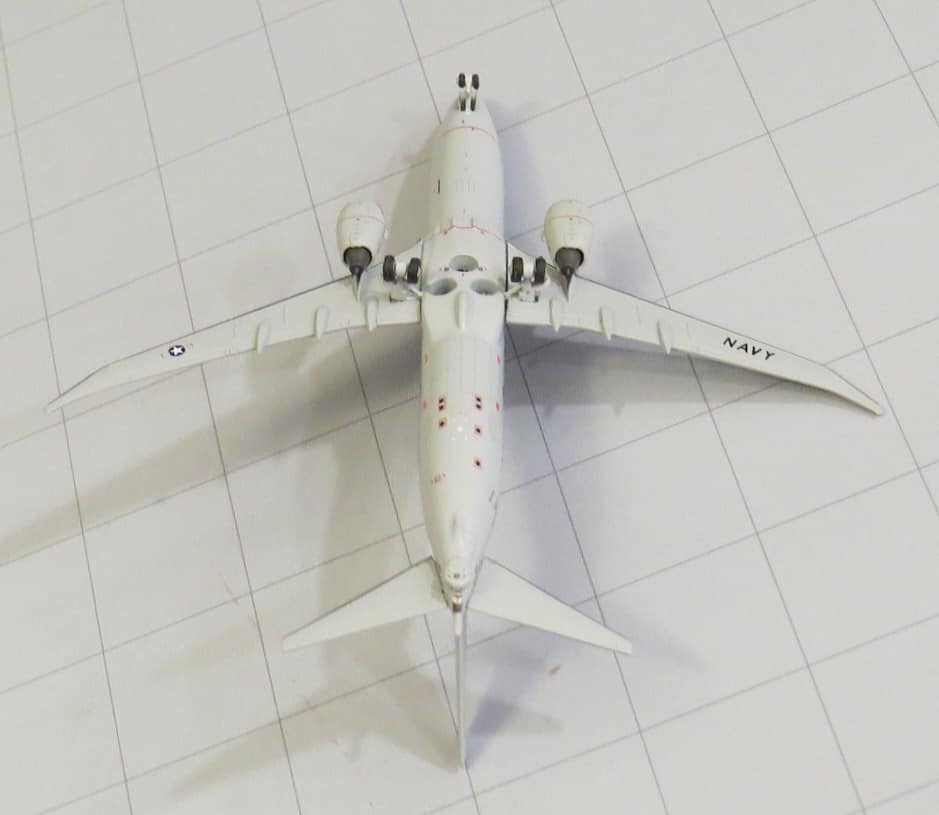 PART 2: THE BASE 737-800
Ignoring the military aspects of the mould and the new 737-800 tooling looks quite good. The biggest failings of the old Panda 737-800 have been fixed. There are improvements at the cockpit and nose, engines and pylons, and an all new maingear.

PANDA P-8 POSEIDON
Overall I would say the base 737 compares well to the NG Models version (see below), although the nosegear looks slightly less well detailed. It doesn't help that neither of the Panda versions in these photos appear to have their nosegear attached properly (although one is far worse than the other).

The nosegear on this model is very poorly attached making it look too long.

Summary
Panda Models look like they have an improved and decent new 737-800, not far from the quality of the NG Models version. That is excellent news and hopefully they use the mould properly. Less impressive, and actually quite disappointing, is this version of a P-8 Poseidon. The basics of the model are there but it lacks a lot of the detail that needs to exist to make a good military model in 2020. It will be interesting to see how the announced Gemini Jets example compares. I expect Gemini will do a better job reproducing the addons of the P-8 but presumably they are using the existing JC Wings 737-800 moulding, which is markedly inferior.