The MD-90 is an updated version of the MD-80 with the vertical stabiliser of the MD-87, a 1.5m fuselage stretch and IAE V2500 turbofans affecting its appearance compared to the MD-80. Only 116 were built and in recent years almost the entire active fleet has been bought up by Delta. 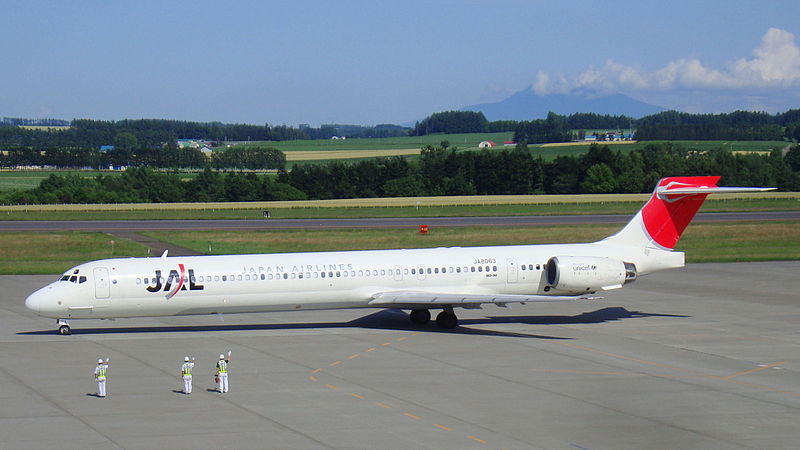 Photo by Karya sendiri from Wikipedia
In 1:400 there have been a creditable 25 models made from 7 different manufacturers as follows: 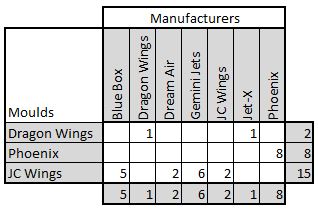 As with the MD-80 however there has been quite a lot of mould sharing going on. Additionally as you'd expect aside from the tail and engines the moulds typically pay a close resemblance to the MD-80s from the same manufacturers.

This mould has only been used twice - once for an American Airlines (ex-Reno Air) example and once for a Saudia plane. It bears a very close resemblance to their MD-80 but uses the tail of their MD-87 mould and of course new engines. As with their MD-80 its a perfectly decent mould and with the new engines avoids the biggest failing of the Dragon MD-80.

This mould also bears a very close resemblance to their MD-80 and so replicates all the same issues that that does. The nose is chunky and too round, the fuselage too level and the horizontal stabilisers seamed and too straight. It has been used for 7 Japan Air System examples showing each of the Kurosawa inspired colours and one Hello of Switzerland aircraft.
Blue Box / JC Wings / Gemini (2008)

This mould appeared in 2008 and it is the same mould that is still being used by Gemini and JC Wings on occasion. Blue Box made 5 models and it wasn't until 2013 that Gemini and JC Wings began their production using it, by which time they had upgraded the gears to rolling ones. Its a nice mould, though unlike Gemini's recent MD80 it has both a seam at the wingroot (though quite well hidden) and a seam at the tail top. Additionally there is a widening of the lower fuselage about mid-way between the wing and nose which though generally hard to see is apparent in side views. Overall it's a pretty good mould and recently JC Wings have updated it with added aerials too.
The latest pair of releases using this mould have been for a Taiwanese producer called Dream Air and use the aerialed version of the mould to depict a pair of Uni Air MD-90s:

Comparing the Gemini MD-80 with the MD-90 you can see the differences especially underneath where the seam line of the MD-90 is apparent: 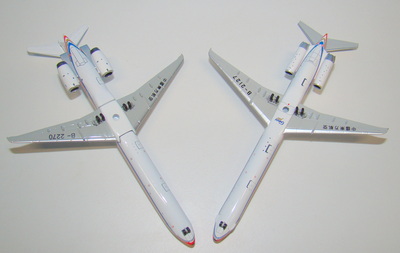