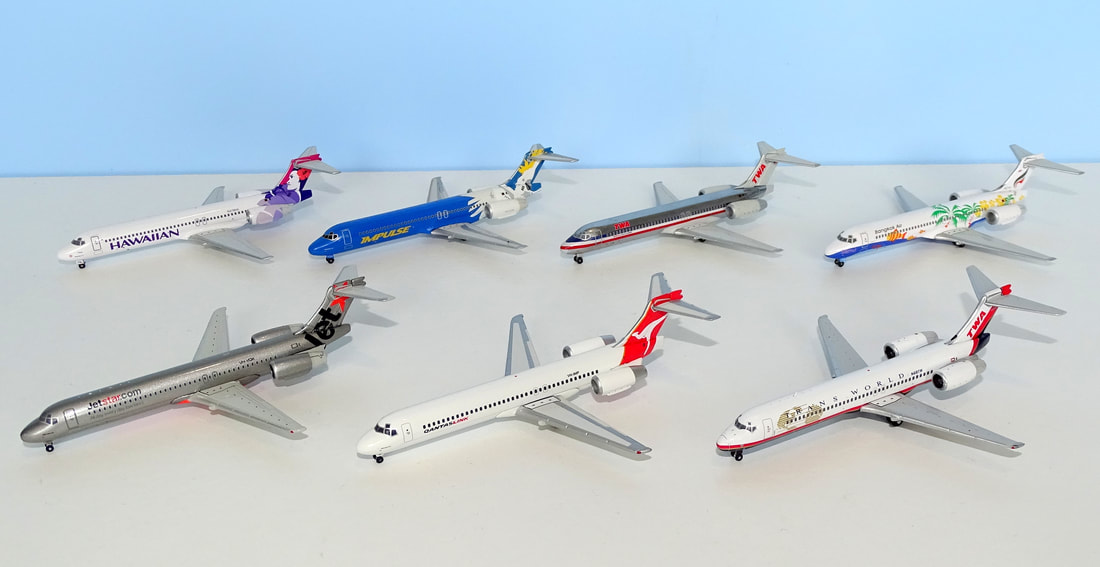 The Boeing 717 is an aircraft you feel never really got the chance it deserved. Caught up in the collapse of McDonnell Douglas and marooned without a family of aircraft for it to go with and a new owner more interested in supporting its inferior 737-600 it never had much chance. Even so, it fitted well between the larger regional jets and the smaller end of the mainline A320 and 737 families and has had a successful career with a variety of airlines. Only 156 aircraft were completed when production ceased in 2006 but as of mid-2022 over 100 remain in service. 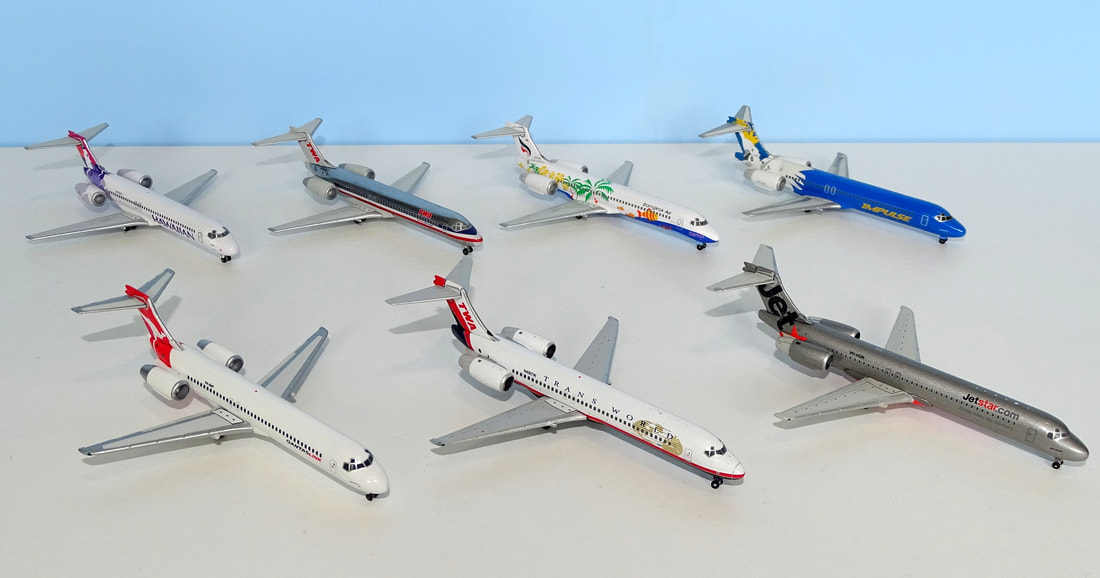 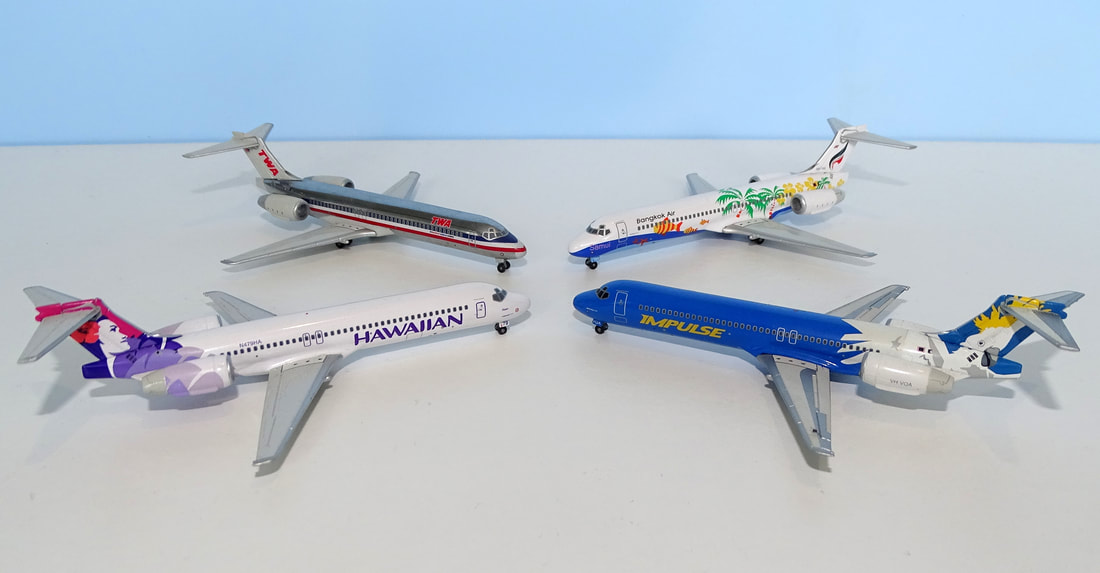 Dragon Wings Boeing 717s
The Boeing 717 has had a surprisingly varied production history in 400 scale, mainly due to the relationship between Gemini Jets and Phoenix, which for many years saw Gemini share production facilities with Phoenix. This led to Gemini using the Phoenix mould for many years and even Phoenix using the Gemini mould once. Nowadays the only mould that seems to be in usage is the Gemini 2005 mould but it isn't used very often with only a couple of models in 2019 and one in 2021 in the past 3 years. Overall as of late 2022 there have been 41 models made as follows: 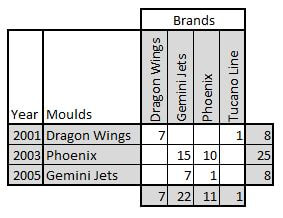 Unsurprisingly given its MDD heritage the B717 looks very much like a DC-9, or more precisely a shorter MD-87, but fitted with the BMW Rolls-Royce BR700 engine. 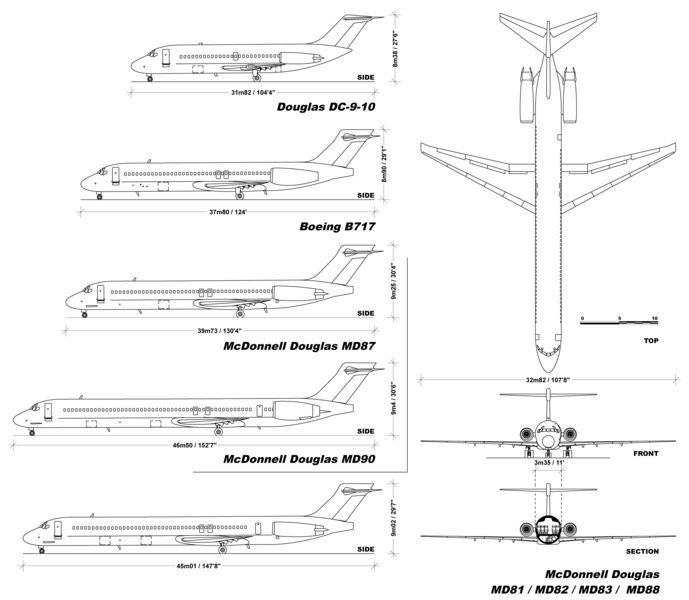 This is without doubt one of Dragon's best ever moulds. Their early seamless moulds were ahead of everyone else and the short undercarriage of the 717 meant that like with their MD-80s the gear didn't look as rudimentary as many of their longer-legged moulds. Even in 2022 it stands out as a fabulous little mould and on par with the later Gemini effort. 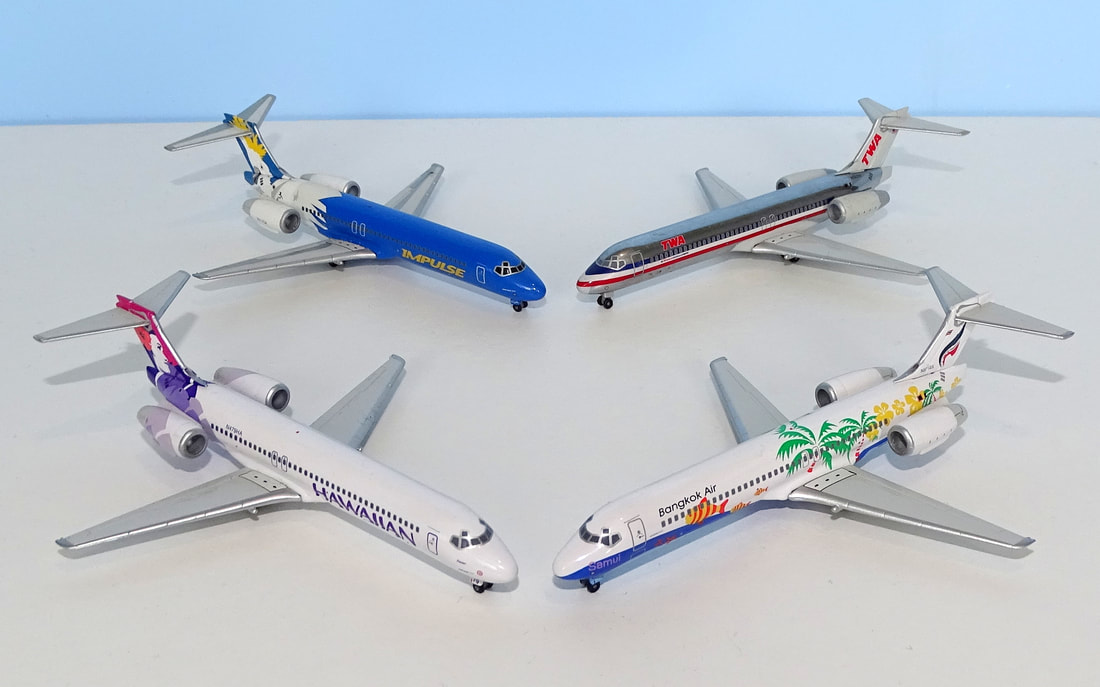 Unfortunately Dragon didn't use the mould well. Even though they made 8 releases on it there was a lot of duplication. Three of the models are TWA in the transition livery and three were Hawaiian Airlines, which meant with Impulse and Bangkok (the latter being a Tucano Line release) they really only made four schemes. This is such a shame and something of a mystery. Certainly they could and should have used it a lot more than they did.

In some ways the mould is superior to both its competitors. For example it has the best engines, which incorporate the long strake on the lower side of them. The shape of the fuselage is good overall with a nice screwdriver tailcone. The vertical stabiliser is also well-shaped although there is a small seam at the tail top to allow fitting of the horizontal stabs.
Phoenix (2003)

I suspect that Phoenix's 717 mould comes from its origins as Tucano Line and through what seems merely chance this is far and away the most used mould despite it being easily the weakest of the three. It isn't a dreadful mould and actually captures the lines of the type reasonably well. That includes a good nose and fuselage shape. The engines are also great and include the strake that is also on the Dragon mould. The mould's Achilles heal is the rather large and obvious seam at the wing/fuselage join.

The mould's usage is interesting. It was used by Phoenix alone from 2003-2008 but in 2009 when Gemini was factory sharing with them they started using it over their own mould. It was then used by Gemini until 2016 well after they had broken with Phoenix and switched to JC Wings as their production partner. Phoenix last used it in 2015 for a Qantaslink Tasmania special colours release.

The mould was never updated and so the undercarriage is still rather rudeimentary and never gained aerials. I doubt we'll ever see it again.
Gemini Jets (2005)
This mould appeared in 2005 and was used twice by Gemini that year and to be honest it never looked that good, however this may have been largely due to the cockpit printing. It then vanished only to reappear in 2008 for a single Phoenix Qantaslink example even though they had their own mould which they used both before and after it. Gemini didn't reuse it until 2017 by which time it had been updated with aerials.

The updated mould looks decidedly better than the earlier versions and recent versions have a nice set of updated landing gear too. The shape of the nosecone and fuselage is as good as the other moulds but the big benefit over the Phoenix mould is that although it is a cradle mount mould the seam is completely invisible from every angle except for underneath. The only weakness really is that strakes on the side of the engines are way too small, almost invisible in fact.