The Airbus A350 neatly fits in between the competing Boeing 787 and 777-X ranges as the primary widebody in the Airbus lineup. The type has come a long way since it was first mooted, around September 2004, as a warmed over A330 with a new wing, engines and composite materials. Although this version attracted orders from the likes of Qatar Airways (who signed for 60 in June 2005) other airlines like Emirates and Singapore were a lot less enthusiastic. Public criticism from the major lessors ILFC and GECAS further cast a pall over the initial A350 resulting in Airbus being forced back to the drawing board.​

The result was a new fuselage allowing a ten abreast seating configuration (as with the 777) and this wider cross section enabled Airbus to christen the A350 as the A350 XWB (Xtra-Wide-Body).The new A350 was positioned between the 787 and 777 in size and available in three initial versions (800,900 and 1000). It was also a significant departure from the existing Airbus lineup with most obviously a very different front end and nosegear setup. In fact, rather than sharing an ancestry with the A330/340 it has more in common with the A380.

​The mid-size variant, the A350-900, was first into production (the shorter series 800 was eventually cancelled) and the prototype F-WXWB first flew on June 14, 2013. The certification programme for the A350-900 ran smoothly and it gained its certification from the European Aviation Safety Agency (EASA) on September 30, 2014. Deliveries commenced to launch customer Qatar Airways in December. The A350XWB certainly seems to have ticked the boxes with the airlines; designed to compete against the 787-10 and 777-8, whilst replacing older 777-200ERs and A340s, the A350-900 has sold 759 units so far. The stretched series 1000 has 176 firm orders.

In 1:400 scale the A350 has been one of the major battlegrounds between those manufacturers who specialise in modern widebodies, especially of Asian descent i.e. Phoenix and JC Wings. Gemini Jets of course have been able to utilise the JC Wings mould and the marketplace has been turned upside down by the arrival of Inflight into 1:400 scale with their Aviation400 brand. This was primarily focused on the A350. Then in 2020 NG Models also joined the fray, albeit only with the A350-900.
​The result is that there have been an impressive 245 A350-900s and 44 A350-1000s produced or announced in 1:400 scale so far. Considering there are under 40 operators of all variants in the world there is usually a choice for the collector between at least three of the four manufacturer groupings for which A350 version you can purchase.

Opinions in this section are based on models in my collection and the detailed mould review I undertook back in 2020. This is now a little out of date, as it excludes the NG mould, but still works for the others:
Comparing A350s: 1:400 Detailed Mould Review
The moulds below are looked at in order from eldest to newest.

The Phoenix A350 has been one of Phoenixes most important moulds of the past five years and is a decent mould, albeit one which cannot compete on the same level as the best A350s being made in 2020. The initial mould suffered from floor dragging engines despite having quite tall landing gear. This has been improved in recent years although ground clearance still isn’t great. Overall the mould is decent but not outstanding.
JC WINGS / GEMINI JETS v1 (2014-2019)

The JC Wings mould has suffered from quite a lot of criticism in relation to its cockpit and nose form, but outside of this it compares well to the Phoenix and is often superior. The thing that has always stood out for me in comparison is that the undercarriage is noticeably shorter, but even with this it hasn’t had the engine ground clearance issues that the Phoenix mould has. I tend to prefer it over the Phoenix but overall it is of a broadly similar quality.​
AVIATION400 (2017)

The Aviation400 mould is much newer than its competition, although it does seem to have been down scaled from its 1:200 counterpart. It has been lauded by collectors and is rightly considered, in general, to be the finest of the three moulds. A big part of this is due to the shape of the nose and the addition of navigation beacons. It is also worth mentioning that as with all AV400 models it does come with a free stand and a push-back tug. Some of the earliest examples had problems with the angle of the engines but this has been resolved. Improvements have also been made to the maingear trucks and tyres. 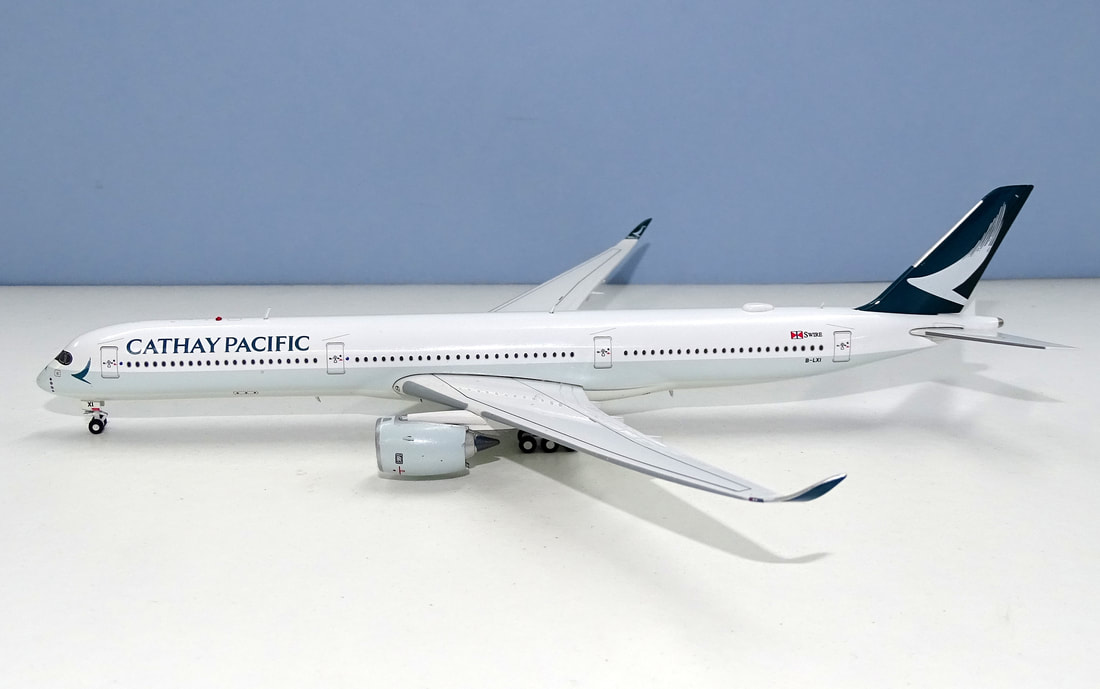 Following criticism of their original mould JC Wings has grafted a new version onto the existing and significantly improved the whole. It is a little unclear when exactly the new mould was released as there was no fanfare and JC Wings tendency to release models at random points well after the release announcements makes it hard to track actual releases. It may even be that Gemini Jets used the updated mould first. The new nose is much better than the previous version and elevates this mould into a worthy contender to the AV400 version. The only drawback is not mould related and that is that the cockpit printing on A350s from JC and Gemini is often poor.​
Below on the left is the new nose and on the right sis the old one. There is a definite stronger change of angle at the base of the cockpit and a different profile at the forehead too.
NG MODELS (2020)
I received a resin sample of the NG A350 mould in January 2020 and was able to report on it then before I received the first die-cast sample in August. Use the below button to view that review:
NG Models New A350-900 Mould
Within that review I scored the NG A350 against its nearest competitor - the Aviation400 A350. On a points basis it won by a small margin so can be considered an excellent mould and arguably the best available to date in 400 scale. I have reviewed the mould in detail for one of the first releases here:
Negaraku: Malaysia Airlines Airbus A350-941 9M-MAG by NG Models