The intention of this page is to describe and show all the National Airlines liveries from 1946 to their merger with Pan Am in 1980. Schemes prior to World War Two are not covered.
1946-1950: ROUTE OF THE BUCCANEERS
National had advertised itself as 'The Buccaneer Route' before and immediately after the war but the arrival of the first DC-4s changed that to the 'Route of the Buccaneers'. This scheme was worn by the Douglas DC-4s, DC-6s and Lockheed Lodestars.
1950-1959: AIRLINE OF THE STARS
The livery was worn by the following types: Lockheed Lodestars, Convair 340s, 440s, Curtiss C-46s, Douglas DC-4s, DC-6s, DC-6Bs, DC-7s, DC-7Bs and Lockheed L-1049 Super Constellations. The DC-6Bs, DC-7Bs and L-1049s would all see service into the early 1960s but were not repainted into later livery variants.
1959: ELECTRA DELIVERY
1960: DC-8 GOLD DELIVERY AIRLINE OF THE STARS
The service entry of the DC-8 in 1960 led to an updated version of the 'Airline of the Stars' scheme. The blue stripe was moved beneath the windows, and made a lot thinner, while above the windows was now a very thin gold pinstripe. NATIONAL titles were now in blue above the gold pinstripe. The tail and forward fuselage featured a large half and half gold / light blue star. 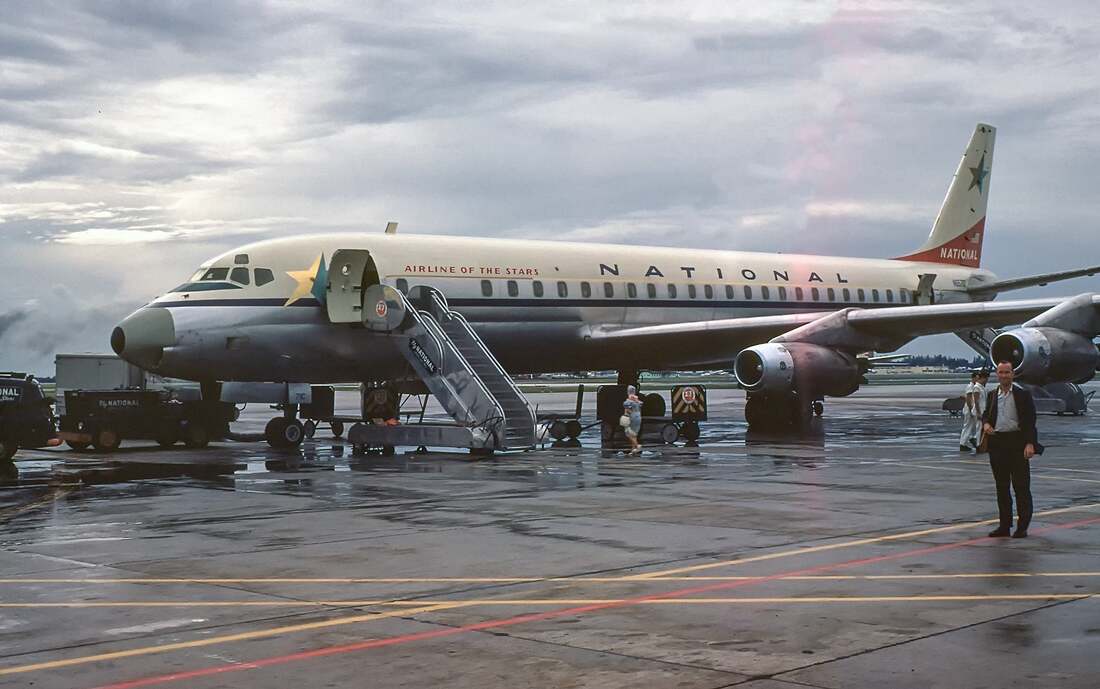 Image above courtesy of Charles Straeche
1960: GOLD JET POWERED ELECTRA
It seems that not long after delivery the Electras were repainted into a version of the DC-8 delivery colours. The primary difference was the structure of the star motif, which changed from being half and half to having a red arrow inserted into it. Forward one point of the star extended to underline JET POWERED ELECTRA titles. AIRLINE OF THE STARS titling was carried at the rear passenger entry door. 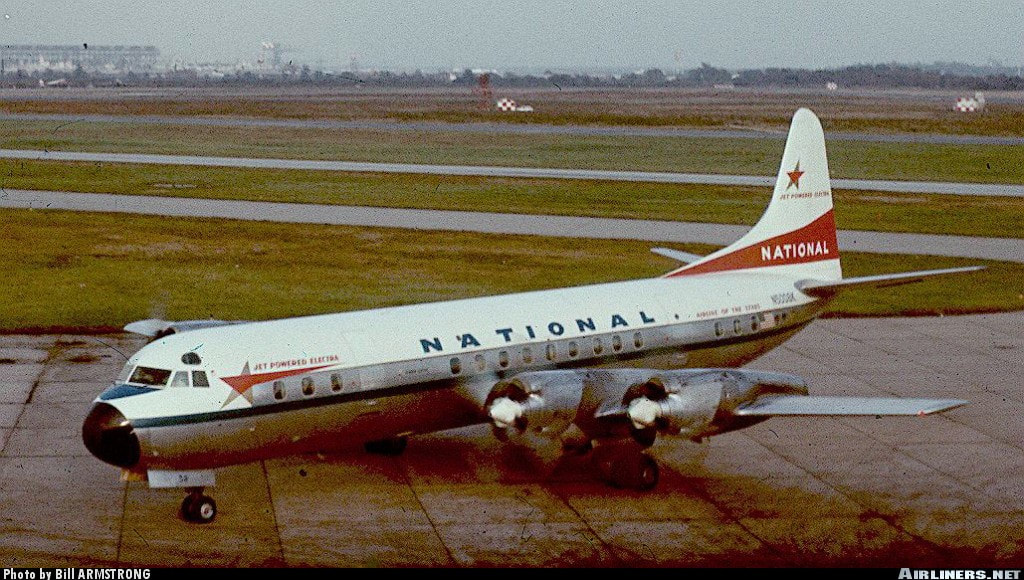 1960: DC-6 / DC-7 GOLD AIRILINE OF THE STARS
It seems the big Douglas props also got a version of the golden Airline of the Stars scheme, although in their version the gold star had a red pentagonal centre with NAL titles in it. 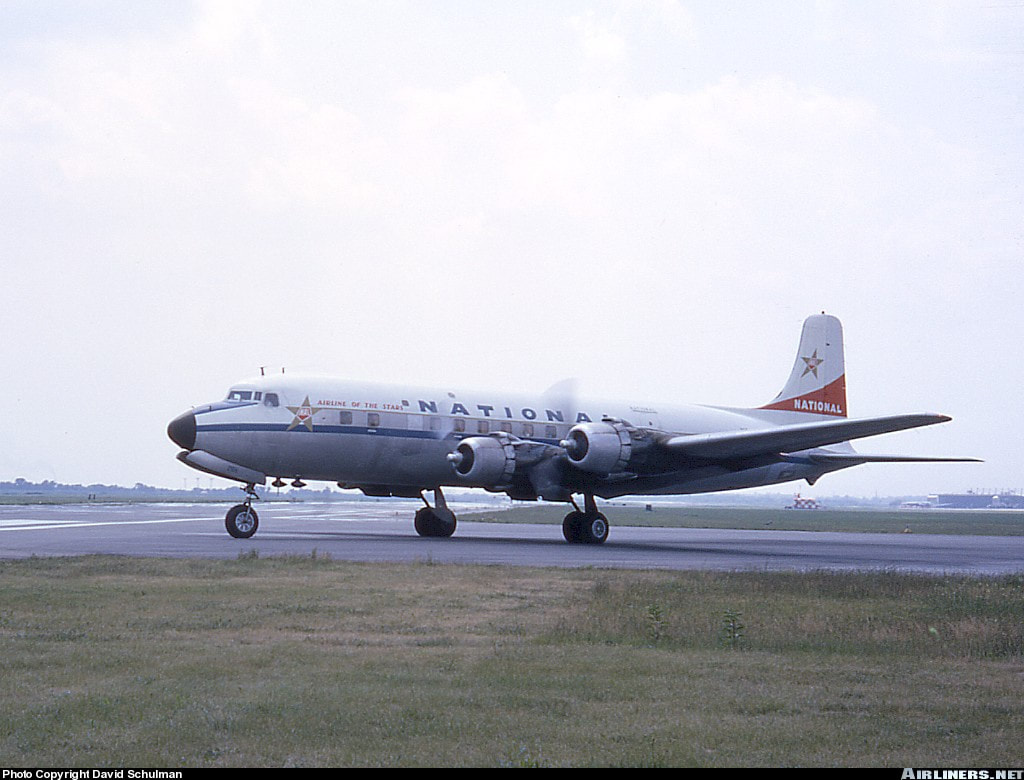 1960: CV-440 / L-1049 AIRLINE OF THE STARS
The rest of the fleet (CV-440 and L-1049) were gradually repainted into a modified version lacking the large stars and instead featuring a red pinstripe in place of gold, expanding into a wedge just aft of the cockpit. Within the red wedge was a small white five pointed star. AIRLINE OF THE STARS titles still appeared just behind the first passenger entry door.

1962/63 LAST DC-8 AIRLINE OF THE STARS
The change with this last version of the 'Airline of the Stars' DC-8 scheme was to make it more similar to the standard livery. This involved replacing the thin gold pinstripe with the more usual red pinstripe expanding towards the front. Also the half and half star was replaced on the tail with a new 'streaking' star facing forward, and the large star forward of the L1/R1 passenger entry door was deleted.
1964-1968: PURPOSEFUL N
1968-1977: INSTANT FLORIDA / SUN KING
In October 1971 the infamous "Fly Me" campaign began and saw the aircraft adopt names reflecting stewardesses. Towards the mid-70s several DC-10s would adopt famous names (Sammy Davis Jnr, Bob Hope, Bing Crosby & Jerry Lewis) in place of the female names. The names were adopted fleetwide and prior to the delivery of the first DC-10s. The earliest versions had a female head behind the name but quite quickly this was altered to have the name inside a cloud like bubble - see the 727-100 below. 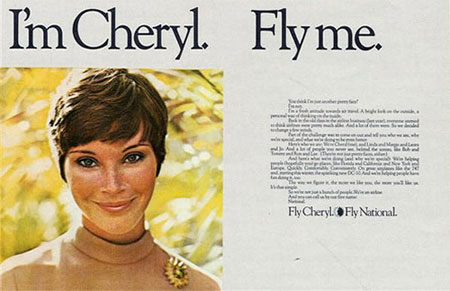 Following the DC-10's well publicised issues the DC-10 titles were removed from the centre engine nacelle.
1977-1980: WHITE BELLY SUN KING
In 1977 the Fly me names gradually began to be dropped from the fleet and at the same time the airline switched to an all white fuselage (except for the 727s, which kept a natural metal rear due to dirt issues). Not all the fleet was repainted prior to the takeover by Pan Am. This scheme was worn only by the Boeing 727-100/200s and the McDonnell Douglas DC-10s. 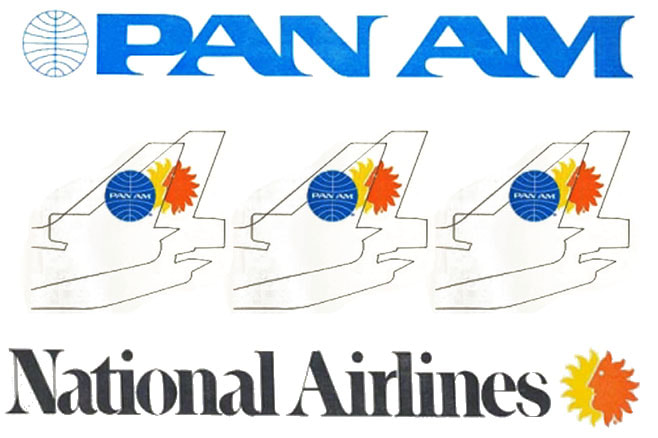