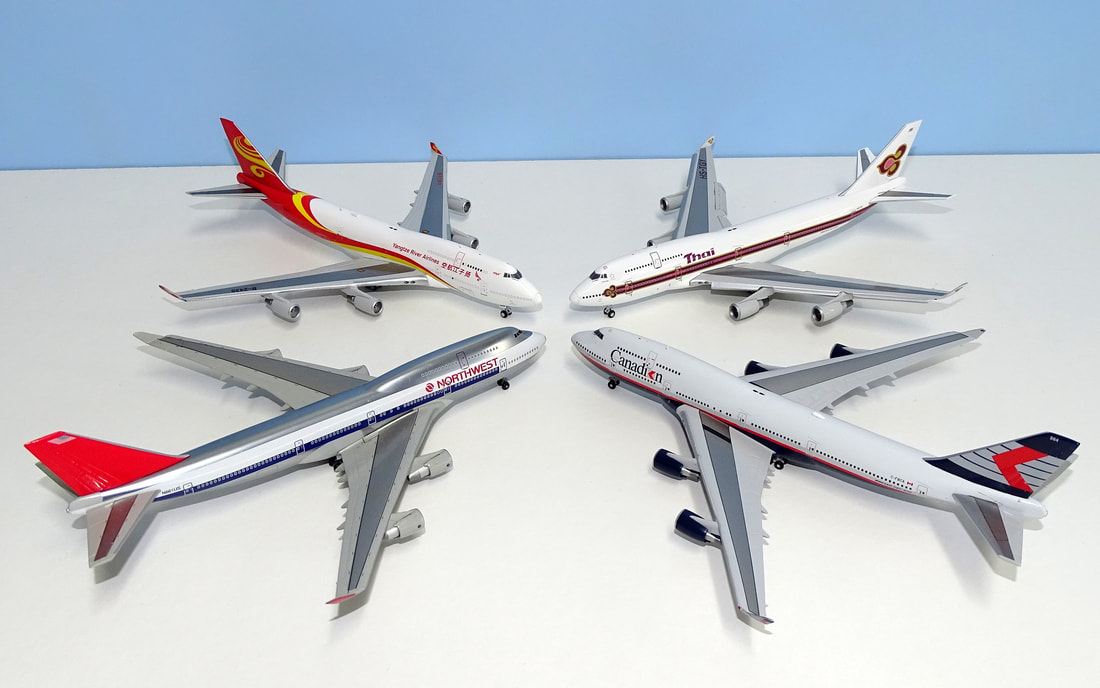 The 747-400 is nowadays seen as a classic, but it remains one of the most important airliners ever made, bridging the gap between the first generation widebodies and the big twins, and selling nearly 700 units to fuel long haul air travel growth during the 1990s. Unsurprisingly the very first Gemini Jets were 747-400s, but perhaps more surprisingly the original mould, albeit in modified form, still remains in use. Since these first Geminis there have been plenty of 747-400 moulds and in this detailed review I am not going to try and cover every available mould - there are simply too many and some are incredibly obscure.
Instead this review will focus on the 4 most important moulds, which account, in various forms for the majority of 400 scale 747-400 production, plus the new JC Wings version. 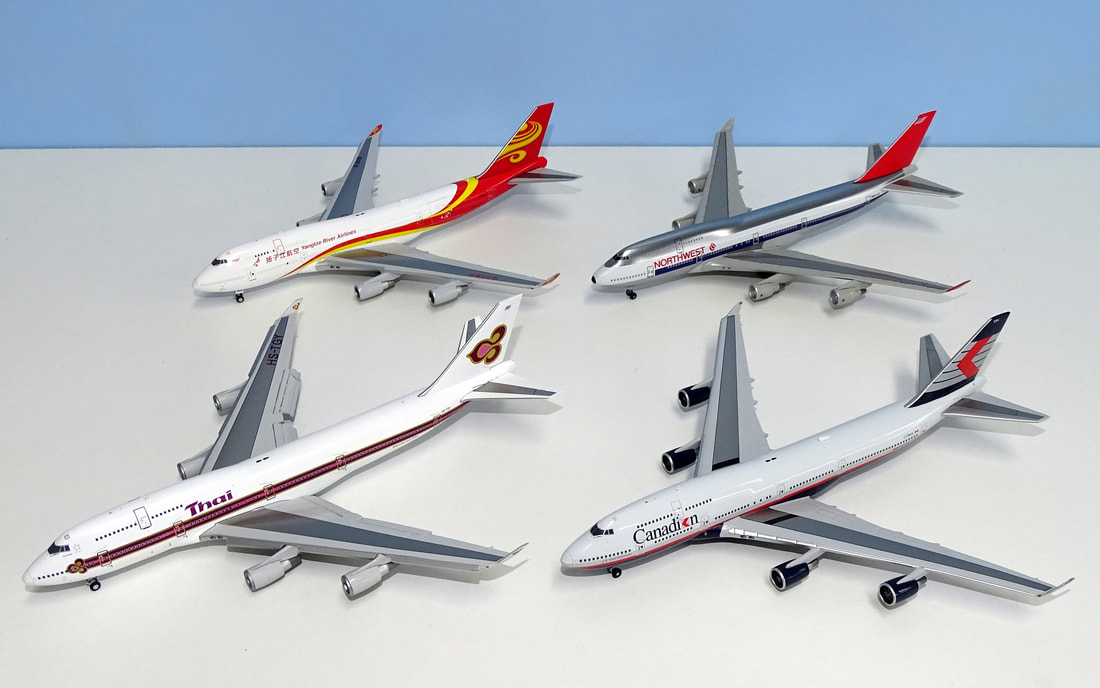 The moulds to be compared in this detailed comparison will be the following:

The large gap between new moulds from 2007-2020 illustrates how the stock of the 747-400 has fallen in 400 scale, although both the original Gemini mould and Big Bird mould have been used on and off throughout this period. The Gemini Jets mould has been modified multiple times to keep it up to date (rear seam removal, aerials, rolling gear) and this review will use one of the most up to date versions. The Big Bird mould has been used by various brands, most recently Big Bird Mk3 who fitted it with aerials. ​

Aero Icarus from Zürich, Switzerland, CC BY-SA 2.0
​The models to be used in this review are as follows:

Note: Images of the KLM are courtesy of Denny Payne - all others are from my collection.

New JC Wings Mould
The review will take the form of a comparison of various areas of each mould to the real aircraft, with a score out of 5 allotted for each mould for each area. Adding the combined scores together gives you the winner.

​NOSE / NOSEGEAR
NOSEGEAR: Obviously the Dragon has the weakest landing gear, which isn't surprising considering its age and lack of updating. Still it is at least the right height. The Big Bird doesn't have rolling gear but does have a really nicely detailed gear leg, good sized doors and is again the correct height.

Once again the old Gemini and new JC share features. Both get the gear leg height wrong and are too short. The Gemini gear is a bit chunky and the gear door is too large, while the new JC Wings gear has really nice detailing and a good sized door but is just too short.

The Phoenix nosegear is actually quite good. They paint the gear a more metallic colour, it is the right height and has some good detailing.
WING FUSELAGE JOIN / ENGINES & PYLONS
ENGINES & PYLONS: Of the models above all have CF6 engines aside from the Northwest, which has Pratts (as does the United in the photo). Visually the difference isn't huge. Once again the plastic components of the Dragon mould help it with the engines. The pylon attaches to the wing cleanly and hangs well. It is well shaped and the engine has nice detailing too. It is only let down by its age, which means silver solid fanblades. The Big Bird has good pylons for the time but the metal attachment to the wings isn't great (although better than on the Gemini). The rear shape of the pylons and overall nacelle shape isn't as good as the Dragon, and yes it has solid silvery fanblades.

The Gemini has a famously chunky pylon join to the wing but the rear of the pylon and engine shape is good. Once again the engines are silvery and solid inside. The new JC Wings mould has resolved the pylon attachment issue and has new style see through engines. On the minus side the hot section of the engine isn't as nice as on the much older Gemini.

Lastly the Phoenix. As with several Phoenix moulds the pylons appear to be too tall, which means the engines hang too low, and also at a funny angle. The join with the wing isn't much better than the much older BigBird. It's a bit of a mess overall. The engine core is solid.
WING ANGLE

WING ANGLE: The 747 has a graceful gently curving wing angle and I admit it is hard to find photos of the real thing from the front that will have the same angle as the model shots. The Dragon, Big Bird and Gemini moulds all have roughly the same wing flex, which when I hold them in front of the photo above roughly match it. The Dragon is the tallest of the three, the Gemini is a little straight and the Big Bird probably has the nicest curve.

The Phoenix has a lower wing, which in my opinion is too low, although this is probably exacerbated by the engine pylons and lack of engine ground clearance. The wing also doesn't really curve much at all it just goes straight. Phoenix 747s often look as though the wingtip is almost lower than the fuselage join.

​The new JC Wings has the opposite problem i.e. the wings don't flex down at their outer edge. Now this is a flaps down model so maybe the wing is different on the flaps up version, but I doubt it. The wing height at its tip does look too high, but it doesn't impact the look of the model as much as the low wings of the Phoenix do.

FUSELAGE DETAILING / PRINTING
All the models made using the Dragon Wings mould, and the majority of models made using the Gemini and BigBird moulds don't come with aerials. However a decent number of the Gemini made versions now have aerials attached and a very small number of Big Bird Mk3 releases do too. The Phoenix and new JC Wings moulds obviously do come with aerials as those moulds are much newer. 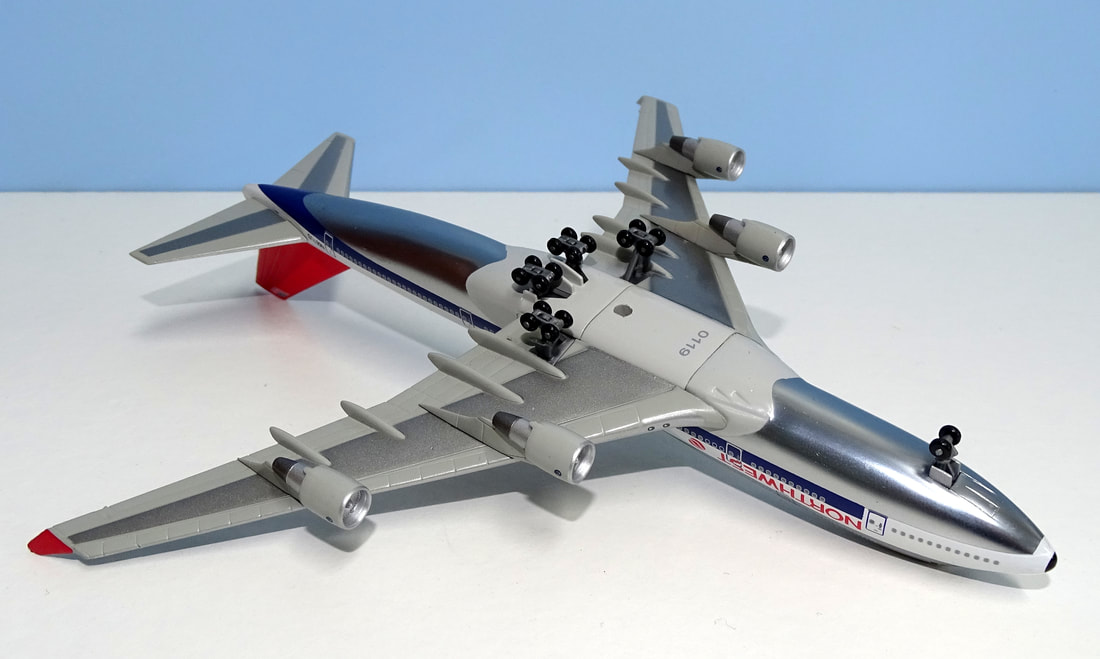 The Dragon mould (above) has limited printing detail, which is no surprise given its age. Dragon didn't always do a great job on the cockpit windows either, although this NW release is excellent. What Dragon could offer was detailed etching on the wings and some nice definition of the nosegear doors and intakes around the wing fairing. 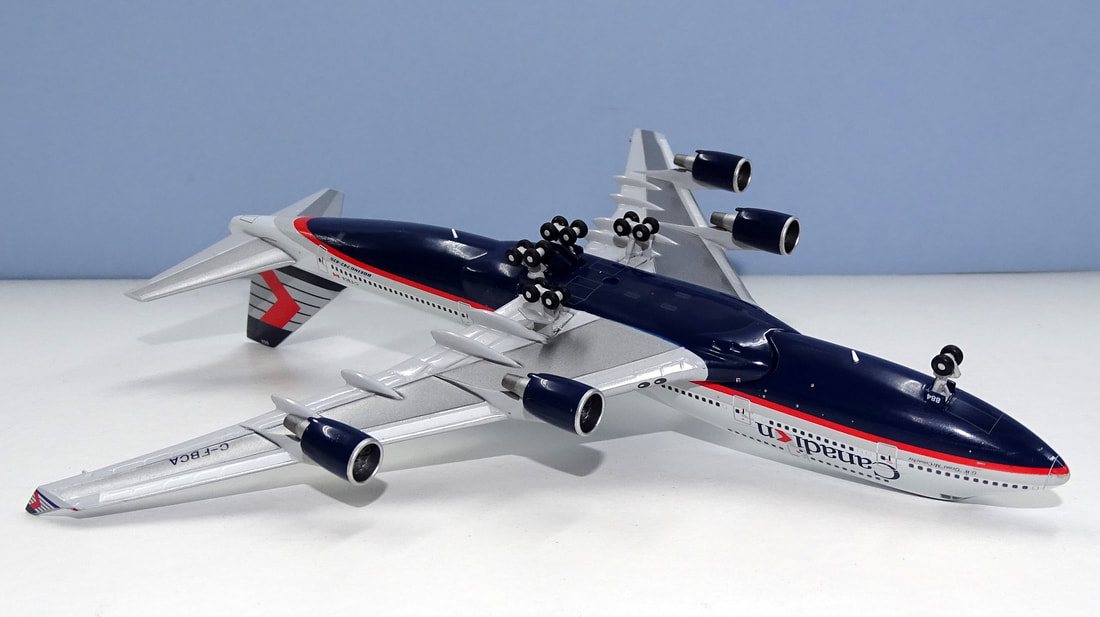 The late version Big Bird (above) and Gemini (below) both have high quality printing and good mould detailing on the underside. The Big Bird has better shaped cockpit windows. The cockpit on the Gemini angles down too steeply in the centre and is a little too large. 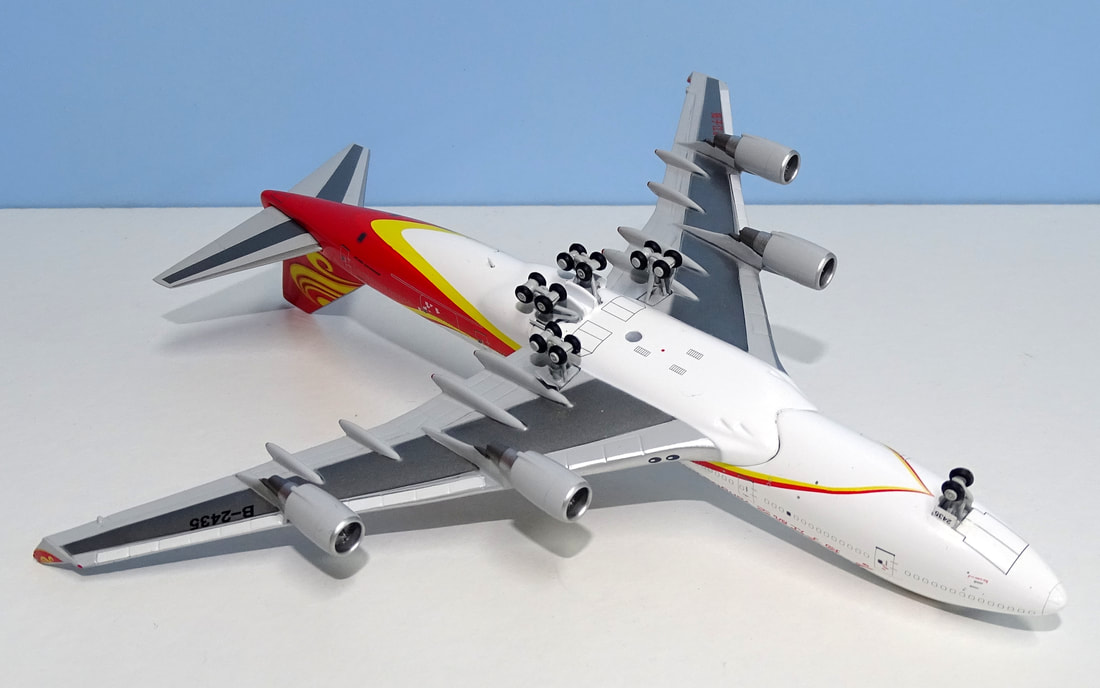 The Phoenix mould (below) shows typical lack of effort by Phoenix. This model was made in 2020 and yet there are no maingear doors printed on whatsoever. Also the shape and detailing of the underside intakes is sloppy and the whole model has the usual ultra glossy look of Phoenix. On the plus side the cockpit windows are printed very well. 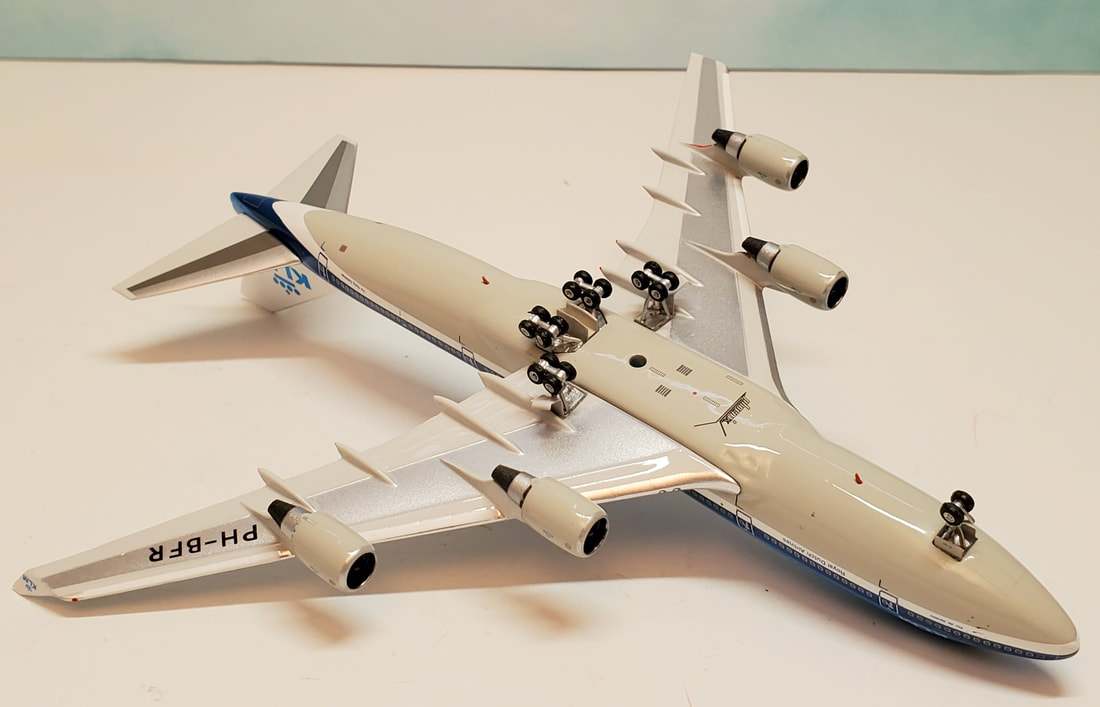 The new JC Wings mould has excellent printing and lots of it, plus good detailing of the underside intakes. Obviously this is a flaps down version too but I'm not giving it extra marks for that. 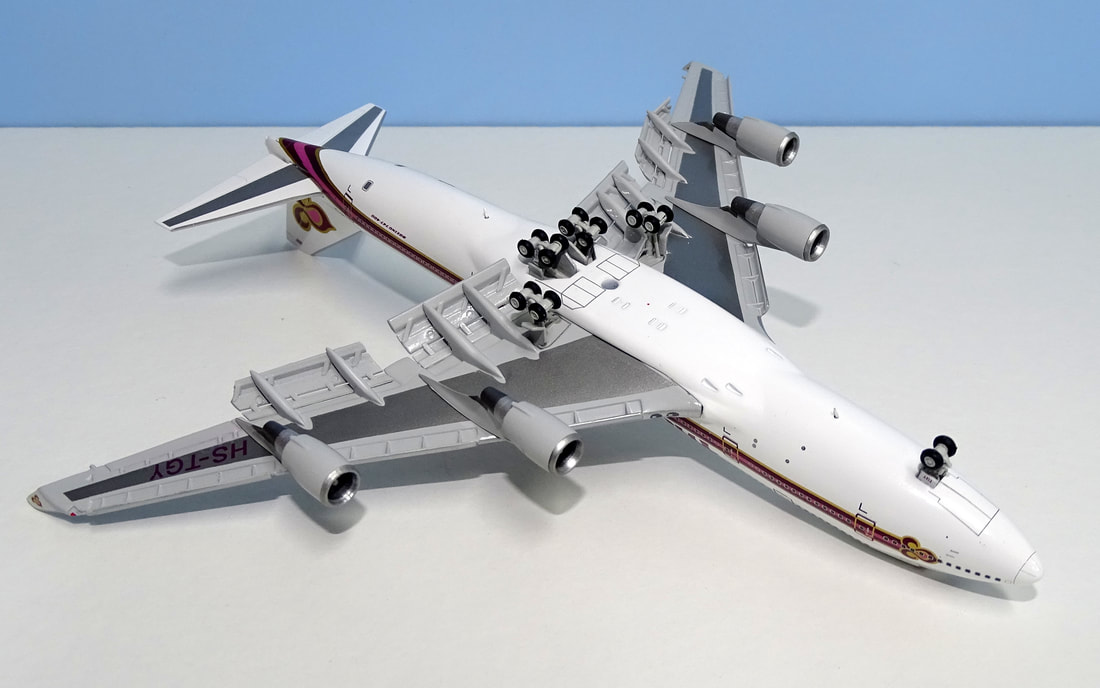 Both of these are JC releases but the Yangtze uses the Gemini mould. Both have cockpit windows that are too large and not the right shape in the middle.
One issue I do have with the new JC Wings 747 is the cockpit printing. It appears similar to the Gemini mould's but if anything the windows are even larger and the central ones angle downwards even further. It does impact the overall look of the model as the cockpit ought to be straight across the top and the central windows should not go down the nose as far as they do on the JC Wings. As you can see the Phoenix and Big Bird moulds are much superior in this area.