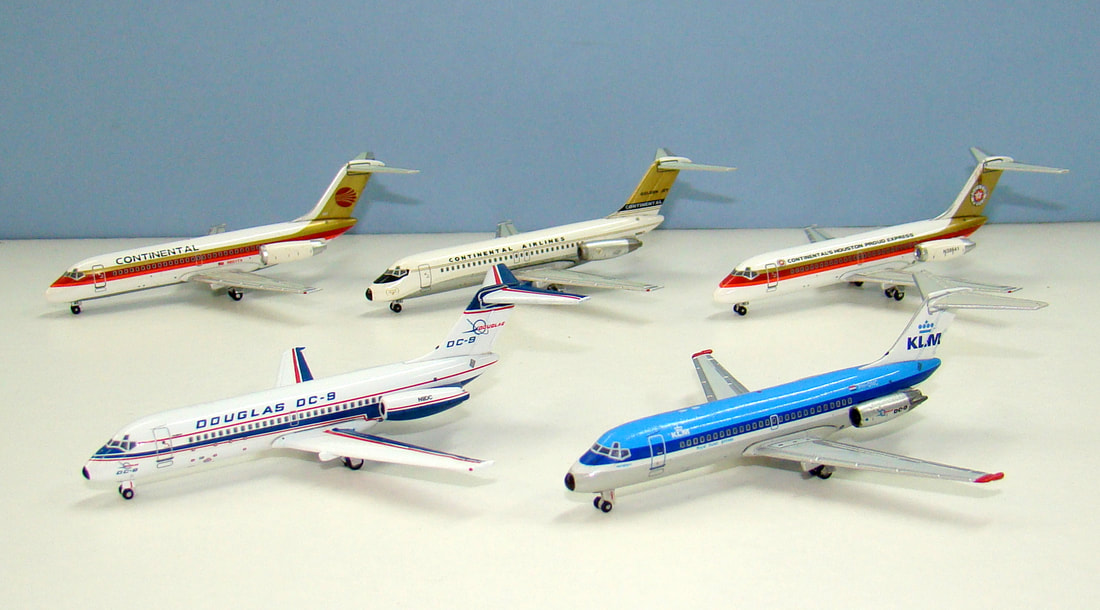 The DC-9 was the first true American short haul pure jet, following belatedly in the footsteps of the French Caravelle and British One-Eleven and no doubt aided by Douglas' rather cheeky 2 year technical crossover with Sud-Aviation, which saw them sell 0 Caravelles but no doubt acquire lots of goodies. The first flight of the type was on February 25, 1965 with service entry, with Delta, following in November. The type proved popular with US local service airlines and trunk carriers and pretty much kept Douglas and later McDonnell Douglas in the airliner business as it proved eminently updateable.

Only a relatively small number (137) of short DC-9s were built but the aircraft usually had lengthy careers so there is an impressive number of airlines that could be made using the type. This has sadly not been the case and indeed the DC-9-10 has suffered from being used on an early Aeroclassics mould. That means Aeroclassics hasn't been too interested in going back to the type and the only other contender Jet-X really didn't make a lot of use of their mould: 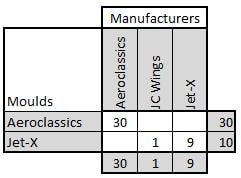 Technically there are six variants of the DC-9-10 - the baseline series 11 plus the series 12, 14, 15, 15MC and 15RC. Even so from the outside the aircraft are effectively identical except for the MC and RC's having a side cargo door.

The prototype in 1965. Photo by Jon Proctor from Wikipedia

The AC DC-9-10 mould is the last of the first generation moulds made by Aeroclassics although unlike several of the others none of the models produced on it were decaled. As such an old mould it is of course totally obsolete by today's standards. The shape isn't particularly great and there is a massive seam from the wing rearwards (as in several G1 Aeroclassics). Famously the two parts of the fuselage are kept together with a screw. The worst part of the mould is the odd stalked nosegear, however on some of the later versions an attempt was made to improve the nosegear and add gear doors (see the difference between the TWA and Standard releases below).

Despite its age and relative poor quality these models are often hard to come by and costly - especially the Mexican ones. Also since so few altrenatives have been made there are usually no alternatives around if you want a short DC-9. Hopefully Aeroclassics will one day modify their excellent series 30 into a series 10 and redo all these releases and more.
Jet-X (2006-2009) - used 10 times

This mould by Jet-X is not a perfect DC-9 but is actually a really decent little mould and yet despite the investment in its creation it has been used only 10 times - and 5 of those were in a single Continental 5 pack set. It is a real shame given the opportunity that exists with this aircraft type. The majority of the mould is excellent and the only part that isn't is thew nose. The angle from under the cockpit to the nosecone is too steep and not rounded enough but even so it is a great little mould. The Continental series have a tendency to sit a little nose down as the nosegear is rather jammed in but later releases like the house colours and KLM below have an excellent nosegear assembly.
So Jet-X made only 10 DC-9-10s and yet they somehow managed to make one of the most grievous errors in cockpit printing I have ever seen. Such a shame as a TWA DC-9-10 is most needed. This model is awful however:

There is a shit ton of DC-9-10s to be made since aside from the 9 ok Jet-X models pretty much every single aircraft has either not been made or desperately needs a remake. Below's a list but I bet I could double it easily with some thought.