The Tristar marked Lockheed's return from its commercial exile since the ill-fated Electra. The aircraft was easily the most technologically advanced of the three initial widebodies but this led the programme into massive cost overruns and technical issues, not to mention the near collapse of its only engine manufacturer Rolls-Royce. Due to all these issues and delays the programme was overtaken by the less advanced but simpler DC-10, which to add insult to injury had engine manufacturers that could afford to invest in new engines giving the DC-10 a range advantage over the Tristar that wasn't closed until it was far too late. In the end only 250 Tristars (of all variants) were built, however large orders from Delta, TWA, Eastern, British Airways and All Nippon meant the Tristar remained an important type well into the 1990s.

Considering the comparitive attention the 747 and especially the DC-10 have received the Tristar was under-represented in 1/400 scale, or at least massively under-represented on good moulds. Things have begun to change in the past couple of years with new moulds finally appearing after nearly a decade of no Tristar releases. Even so only one of the L-1011s is really top quality and it'll be some years yet until a representative bunch of excellent Tristar are available. Here's a rundown of the 7 moulds that have existed in 400 scale: 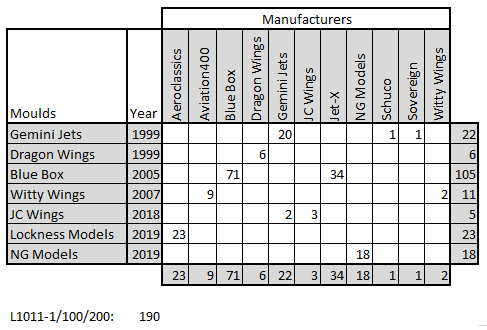 NOTE: This review does not cover the shorter Tristar 500, which will be dealt with separately.

The Tristar was continuously upgraded throughout its production as Lockheed attempted to ring more range out of the baseline model without having to make major changes. Even so all full length Tristars look very similar from the outside. The L-1011-1, -100, -50 and -150 all are basically the same from the outside, indeed the latter two were conversions of existing series 1s. The later series 200 also has basically an identical airframe but with upgraded Rolls Royce RB211-524Bs (rather than RB211-22s) and a frisbee fairing - a modified middle engine fuselage join (see the images below). The Tristars delivered to Pacific Southwest had additional changes as they were fitted with an entry hall in the lower baggage area that led to a lounge. From the outside this involved an obvious belly addition. Check out my blog entry on PSA Tristars for further details - Smiling Widebodies: PSA's Tristar Gamble

Note the different middle engine / fuselage frisbee fairing of the L-1011-200 (and some upgraded Tristar 1s) as displayed below by this Air Lanka example:

It should be noted that nobody in 1/400 scale has attempted to create a Tristar 200 mould, which isn't too surprising as only 24 were built. The PSA releases also do not faithfully detail the extra underbelly lounge additions either.

So let's take a look at the moulds, as always, in date order.

Gemini were first to market with a Tristar 1 mould but rather failed to take advantage of their lead and only ever produced 20 models using it (including All Nippon and Cathay releases packaged as DreamJets). Another was re-released as a Schuco and Sovereign made a single Gulf Air example. I think Black Box may have also commissioned an Eastern Tristar too. This was one of Gemini's first moulds and a couple of the earliest examples have rudimentary landing gear legs - sometimes without any nosegear doors too. That's a shame as the mould itself is not bad. Despite its age the paucity of good Tristars means some of these (ANA and Cathay especially) can still go for very good $$ if you can find them.
Nose - Generally this is a decent representation. The cockpit windows are often printed too large and the nose is not quite round enough but it captures the Tristar's feel for me. The intake vent detailing is too small also and unsurprisingly for an early mould the gear is simple and the attachment point not great. The seam at the wing joint follows the real thing's curves but doesn't fit well and is a bit obvious. Still it's pretty good.

Tail - Early Geminis are plagued by seams and the Tristar mould is no different with a really obvious one under the horizontal stabiliser. Gemini would get rid of these as it modified its moulds but since the Tristar didn't get any use after 2004 they didn't bother with it. The shape of the tail seems ok but the tail join is unsightly and the sculpting around the middle engine at the front sides is incorrect. The exhaust is the worst part. It is clearly missing a bit and doesn't look like its fits the mould well, plus the shape of what is there is wrong.
Dragon Wings (1999-2001)

There's obviously something about the Tristar as Dragon, who usually made a decent range with their moulds, used their own Tristar mould only 6 times! They did at least use it to make some examples Gemini never did, in fact there is almost no overlap (aside from a Cathay example). This does mean however you stand no chance of ever standardising your Tristar fleet. This mould is inferior to the Gemini at the nose end but superior at the tail end. It is also seamless, which is a big plus. Dragon's lack of use of it is puzzling and infuriating.
Nose: Ok though not as good as the Gemini. The nosecone is too short and pointy and the printed grill by the nosegear too large. The gear itself is your typical Dragon simplistic gearleg and doesn't fit well. On my Caledonian they've printed the cockpit windows too low too.

Tail: No seams on such an early mould is commendable and generally the tail unit is great. The curves around no2 engine work well (though they are still not correct) and the exhaust is fully complete (though the ends aren't quite right).
Blue Box (2005-2007)

Blue Box Models were one of several mystery meat brands that came onto the scene around 2004. In 2005 they created a brand new L-1011 Tristar, which was allegedly one of the major factors as to why Gemini never updated their mould and why Aeroclassics never made a Tristar of their own. Blue Box were prolific with their Tristars and their future partner Jet-X also used the mould as well. The mould has been rather controversial as it isn't great but the number of releases has been cited as a factor in the huge delay in another widely used L-1011 being built, at least until 2019.

The mould isn't dreadful but at both the nosecone and tail region it is inferior to the two previous under-used moulds. The Blue Box mould was also usually produced in only small runs per model and they are often hard to find. One innovation for this mould is that the engines come with removable engine covers. Basically until recently if you had an at all representative collection of Tristars you were going to have to bite the bullet and accept this mould.

I should also note that Blue Box had a silly tendency to release chrome and gold plated versions of some of the models. God knows who wanted those!
Nose - A bit of a mess. The nosecone is clearly too short and blunt and it often looks like the cockpit windows are sliding down to meet it. It does have the best gear so far but that's to be expected given the younger age of the mould and the nosegear doors are still the wrong shape.

Tail: The no2 engine is slab sided almost and the mould has a weird tail/fuselage join line not present in the real thing. The exhaust is the best yet and has a correct flat end but that can't save the mould.
Witty Wings / Aviation 400 (2007-2014)

The last best chance for the Tristar was from the unlikely source of the Witty factories. Some of their moulds were rip offs of others (the 707 and CV880/990), whilst others are just middling (DC-10, 727) but the Tristar is along with their 747-200 their crowning achievement. It is a shame therefore that it got used a total of 11 times before Witty stopped production in 2014. Most of Witty's production was under their Aviation 400 brand and the output consists of a really random selection of obscure airlines like Air Ops! Only the Saudia release could be said to be a major Tristar operator. This was the last of a series of missed opportunities for the Tristar and signalled a long period of no Tristars.
Nose: This was the best Tristar nose at this point although there is perhaps a bit of a forehead, not helped by the nose wheel being slightly too small. It is missing the scallop intake and the gear doors appear wrong again but overall commendable.

Tail: Graceful curves reproduce the real look very well. In fact this is the only mould to get the middle engine anywhere near correct. From the top the central engine looks less good as it is very thick at its mid-point. The exhaust looks good though it isn't quite as square as it ought to be.
After having only a tiny number of Tristar releases for a decade all of a sudden in 2018 the collectorate got wind of three new Tristar moulds, at least one of which was seemingly a reaction to NG Models saying that they would be building a new Tristar, after listening to the collectorate. So close together in 2018/2019 came three new Tristars.
JC Wings / Gemini Jets (2018-Present)
JC Wings had by 2018 access to three old Tristar moulds - the Blue Box, the old Gemini and the Witty Wings. The latter had been acquired when JC bought all the old Witty moulds. The new JC Wings mould, also used by Gemini Jets, appears to use the Witty mould as its basis but has been thoroughly updated. Some of the updates are improvements and some are not. The mould itself has been used only a few times and therefore it isn't really a serious contender.

Lockness Models / Aeroclassics (2019-Present)
The Aeroclassics mould was released under the name of Lockness Models. The mould is all new but frankly not a particularly impressive Tristar rendition. Aeroclassics used it quite heavily initially but has effectively stopped using it now that NG Models has fired up its own production.
I have looked in some detail at both the JC Wings and Lockness moulds in a detailed review, which you can see here:
L-1011 Tristar 1 Contenders: Lockness vs JC Wings / Gemini Jets
NG Models (2019-Present)
NG Models had announced they were making a Tristar for some time and they saved the best until last because when their L-1011 arrived in late 2019 it was clearly the most impressive 400 scale Tristar built to date. They sent me through sample models in April 2019, which I reviewed in detail here:
A Tristar Trio Pt1: NG Models New Tristar 1 & 200
Especially nice is that NG have produced both the Tristar 1 and Tristar 200 versions - the first time anyone has produced a standard length Tristar with the frisbee fairing. Following my review they made some changes to correct issues with the nosegear door and engine pylons and the resulting moulds are excellent. The only minor criticisms are the shape of the maingear doors and angle of the engine fronts. I have undertaken detailed reviews on the mould a few times, which highlight how good it really is:
NG Models L-1011s Detailed Reviews
The moulds has been getting steady usage but there remain many Tristars that are still to be made. Hopefully NG will gradually get to them and produce a fabulous lineage of Trijets. 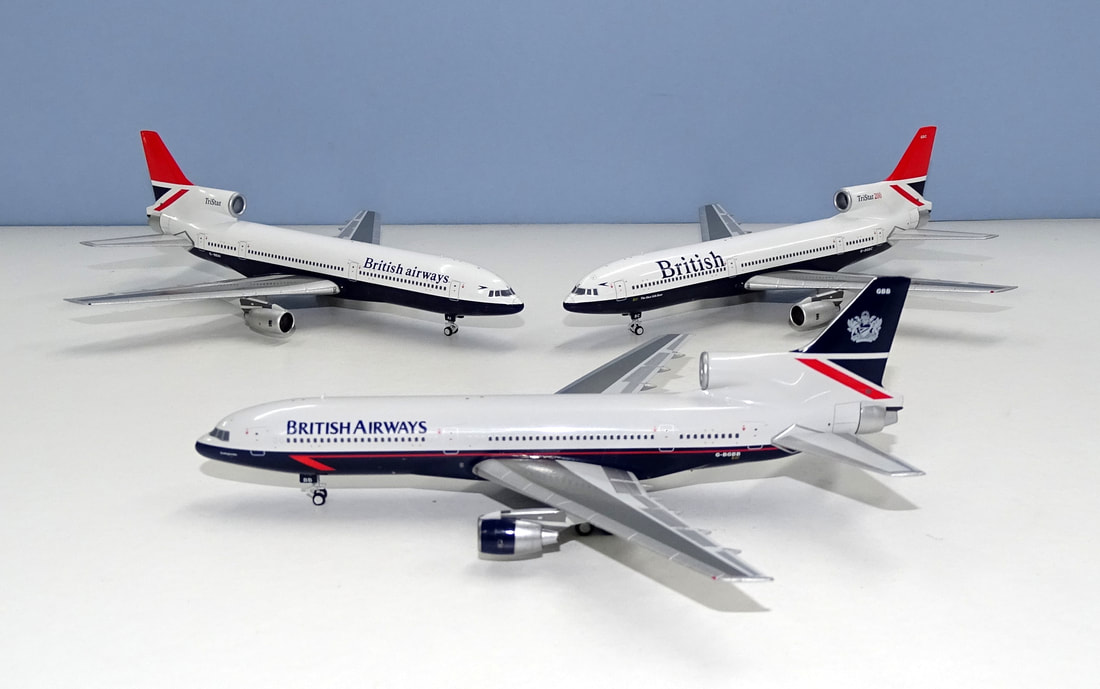