Hong Kong based Dragon Models were the first major manufacturer of 1:400 scale die-casts and remain a manufacturer of models, albeit not in the civil aviation market. Dragon Wings, the airliners stream, have always been just one of several lines of models made by Dragon, which includes action figures, 1/72 scale warbirds and armoured vehicles – see their website for the other lines http://www.dragon-models.com/ .
Dragon Wings models first appeared during 1997 and by 2001 they’d produced more models than all the other manufacturers added together, and more than twice as many as their nearest competitor – Gemini Jets. In fact, in this first 5-year period they had produced nearly 400 models, which is almost a third of their total production to date. At this point Dragon had a high reputation for quality models. Most of their moulds were seamless and had slot in wings at a time when almost everyone else was making cradle moulds. Their Tampo printing was also good for the time.
Above: A couple of early Dragon Airbuses with very simple undercarriage
​The earliest moulds included the A320/21, A330, A340, 737-300, 747-100/200/400, 777 and MD-11. Tristar and Tristar 500 moulds appeared during 1999 but only got 7 releases before they vanished in 2001, possibly due to a factory move. Similarly, a 757 mould that debuted in 2002 was never used beyond 2003. Generally, however Dragon used its moulds well and the releases using them were significantly increased due to its partnership with Jet-X from 2001-2007 (covered in a separate entry coming soon).

Below: A selection of Dragon Moulds ranging from models produced between 1997 and 2005
Dragon did use a small number of subsidiary brand names (possibly due to licensing issues in the 2002-2004) but typically these only ever had a very small number of releases attributed to them. These included:
The Models 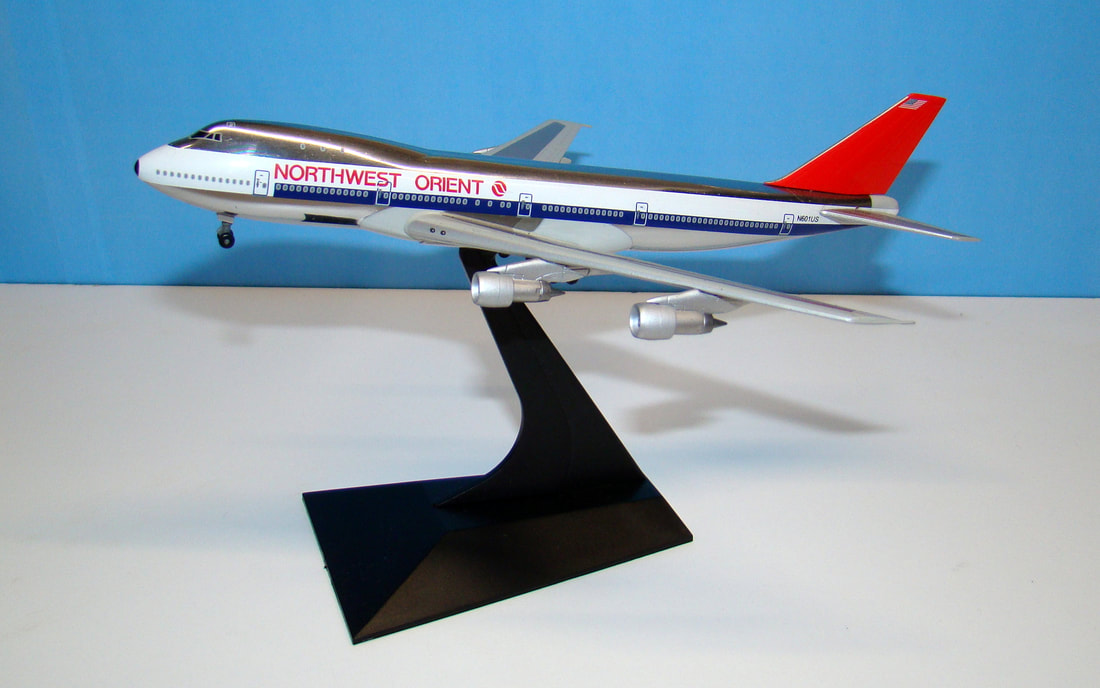 A lovely Northwest 747 displaying on the classic Dragon Wings stand
​The unique aspects of Dragon Wings models are of course that they are not all metal (increasingly this is the case with other manufacturers but not to the extent as with Dragon). The fuselage was die-cast but the wings, stabilisers, engines and undercarriage were all plastic. This also enabled the undercarriage to be removed and when fitted on the plastic stand, that all models came with, closed wheelbay doors were provided to be added in place of the gear. 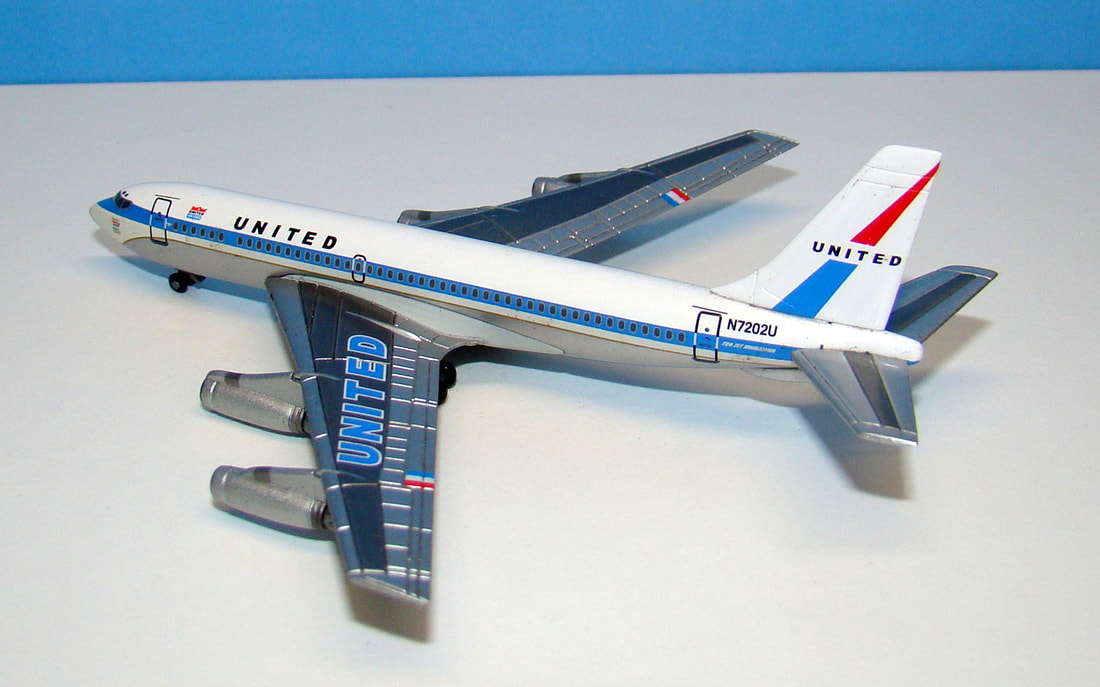 Wing etching was sometimes a little too deep
​Initially the plastic wings had some benefit as it allowed more detail to be shown on control surfaces, although sometimes it also meant that the etching on the wing surfaces was too deep. As the years went by and other manufacturer’s technology increased Dragon’s technology appeared to stay static. New moulds were often not improvements over older ones, which in comparison to other manufacturers moulds were usually second-best. Dragon also had a tendency not to replace original moulds, so although for example their A320 was always one of their weakest it was never replaced with a better version.

Above and below: Three of Dragon's best moulds still thought well of today - MD-80, 717 and L-1011-500
The plastic wings, which were originally something of a strength, became a liability as newer technology allowed for thinner all metal wings with excellent detailing and fabulous printing. The fitting of vertical stabilisers was also generally a weakpoint of the models.

Above: Early stalk style maingear on an early Garuda A330
Below: Modified maingear on a later Swiss A330. Still simple by competitor standards

The undercarriage was also a weakness compared to later competing products, which had detailed delicate gear and rolling gears. The earliest Dragon moulds usually had stalk like maingear with no maingear bay doors. All of these moulds were improved with proper landing gear and doors but only to the same standard as the existing nosegear i.e. rather simple and chunky with static wheels.
On the plus side Dragon did branch out into some more unusual moulds like the Airbus Beluga and the Boeing 747-400LCF. They also showed an interest in various military aircraft (like KC-10 Extenders and B-1 Bombers) and more unusually Dragon Space models represented Shuttles and rockets. 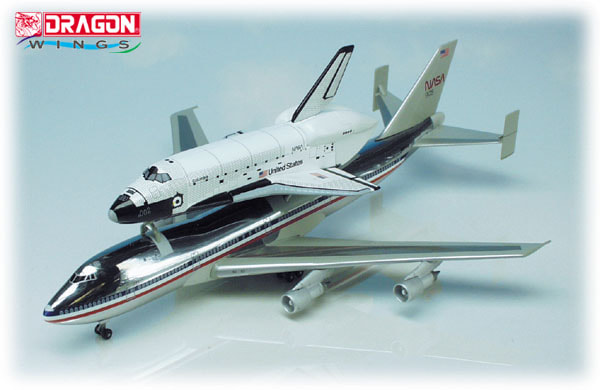 Another area of interest Dragon showed was in airport scenes. Some models were released with parts of terminal buildings and ramps.
​Some models (mainly US classics) also came in metal boxes with a carboard surround: 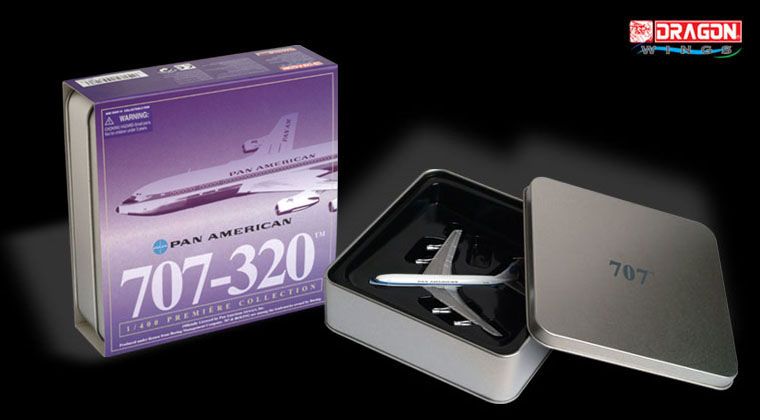 Winding Down
Dragon continued to be an important manufacturer through the 2000s but gradually it lost marketshare to Gemini Jets, Phoenix and Aeroclassics. Production of models appears to have decreased during the second half of the 2000s, and after 2010 it was mainly space models and Airbus house colours that were made. It seems Dragon kept the Airbus licence to make house schemes until into 2014, which is something of a shame as Dragon’s Airbus moulds are some of its weakest.
Dragon’s own site shows production up until 2012 but they produced new civil airliners at least into 2014, producing A380s and even an A320neo and A350-900.
Nowadays even some late production Dragon Wings models look somewhat crude, partly because of the failure to engineer more accurate fuselage castings and more detailed landing gear. Their models aren’t particularly sought after and certainly not to the extent of older Aeroclassics, Big Bird or even Gemini Jets.

Only Dragon has made a 727-200 with winglets
Nonetheless, Dragon remain a pioneering brand for 1:400 scale and many of their models are still very good. It is hard to have a representative collection of any size and not still have a number of Dragon Wings models in your fleet, especially as some of their better moulds (L-1011s and MD-80s for example) have been so neglected by other 1:400 scale manufacturers. Their 747s are also still well thought of (although cockpit printing can be poor), partly admittedly due to the scarcity of Aeroclassics and BigBird releases.

Only Herpa and Dragon have made a 1:400 767-400 and Dragon's is pretty good
Looking at the wide variety of moulds made by Dragon several are still what I would consider excellent, although it is true that the printing standards rarely match that of modern manufacturers. Below is a quick review of the major moulds produced: