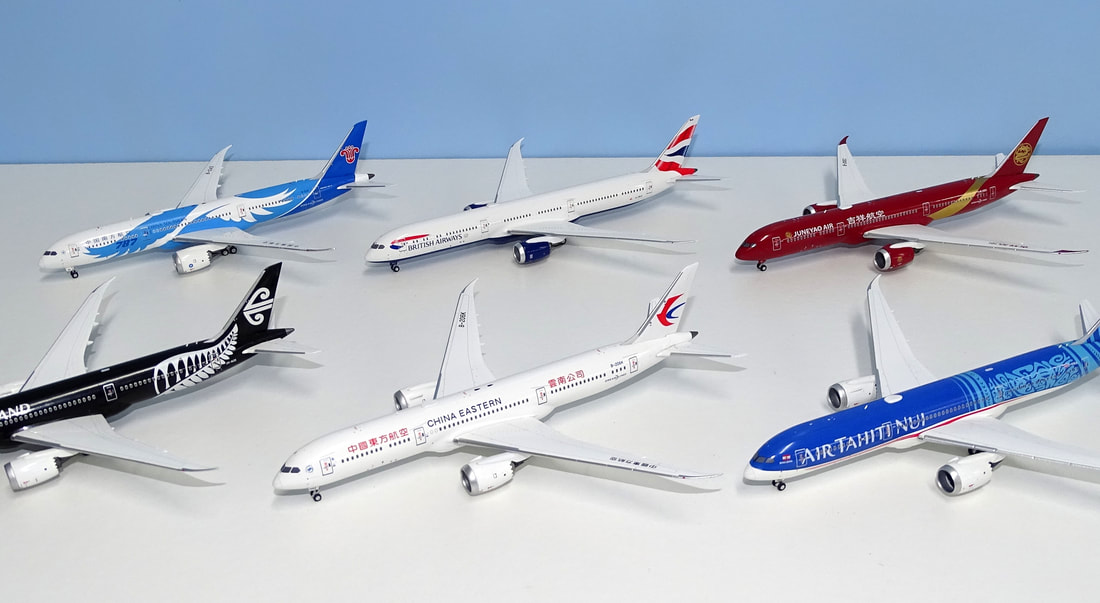 The 787 is an excellent aircraft family but one that has been dogged by controversy and delay ever since launch way back in April 2004. Designed as a hub buster the type has perhaps ended up being far more conventional but is obviously an effective and efficient twin jet that is highly competitive against Airbuses' A330neo and A350-900 family. Nonetheless the costs involved in the long delays between rollout and first flight (July 2007-December 2009) and subsequent issues with the lithium-ion batteries and engines mean that even after orders have been taken for over 1,400 aircraft it is still unclear whether Boeing has even broken even on the programme. In the long term much of these issues will no doubt be largely forgotten as the 787 family becomes profitable and remains a major player in the civil space well into the 2040s.

The major 400 scale brands of the mid-2000 were very keen to produce a 787 mould - so much so that Blue Box produced a fantasy 7E7 mould in 2006 based off of the early shark-fin radical designs put forward in the press for what would eventually metamorphose into the much more conventional Dreamliner.
Even though the 787 wasn't rolled out until July 2007 by that time there were four available moulds, all of which had been used for some Fantasy releases. One of these moulds (that of Phoenix) even continues in use in 2022. Phoenix, Hogan and Gemini all created 787-9 moulds based off of their original 787-8s and it wasn't until 2013 that the first all new 787 mould was created in the period since the type first flew. This Witty mould got limited usage before Witty's bankruptcy.
Fortunately this rather patchy mould set has been vastly improved by the new JC Wings mould in 2016 (finally now being used by Gemini after many years) and the NG Models mould of 2018. Still on the horizon is the new Aviation400 mould, which from the samples looks great. They have announced four releases but I don't expect we'll see them until the second half of 2022. 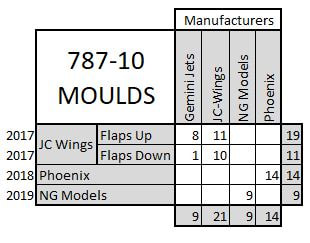 The trio of 787 variants are basically identical aside from the length.
Boeing 787-8

787-8 (2006)
The Dragon 787 is symptomatic of many later Dragon moulds in that it looks like an anachronism even for 2006 with hopelessly simple undercarriage (which is too tall too) and a rather simple overall look. The wings are in the in-flight pose with the wingtips curving upwards heavily, which I guess may work with the model on the stand and undercarriage disconnected. I have never had one of these in hand but it also looks like this mould has a cradle mount, which would be highly unusual for Dragon. Dragon only released 17 editions, with the last coming in 2010. They aren't regularly seen on the seconds market and the rather toylike quality of them counts against them unless they are wheels-up on the stand. 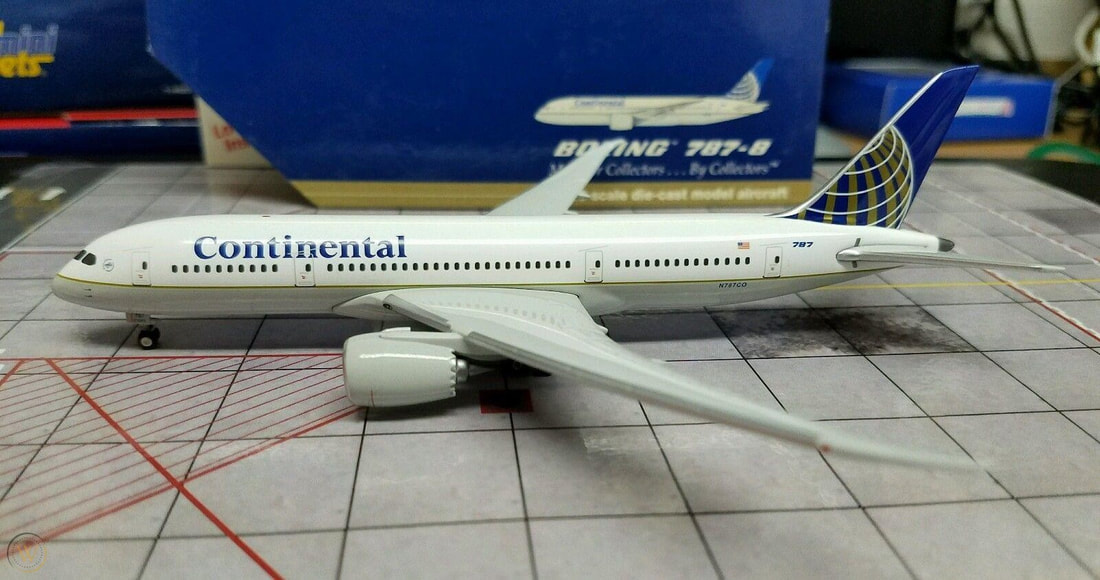 This 787-8 was the 2nd release and dates from 2006 way before aerials were added
The Gemini 787 originally appeared as long ago as 2006, a time when 400 scale moulds typically came with cradle mounts and the associated seam, so it isn't too surprising that this mould came with a seam when the 787-8 was released. Then again both Dragon and, by then, Phoenix were producing seamless moulds so you could argue they should have been aiming higher. Gemini seemed to recognise the inferiority of their mould as in 2007, after only 8 releases, they switched to the superior Phoenix mould of their then production partner. 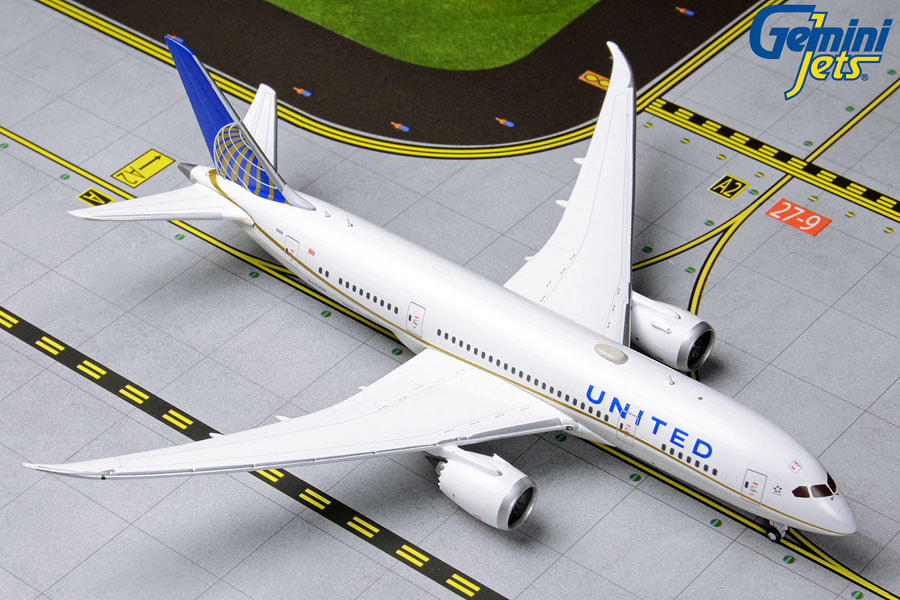 This is a 2019 release still using the old seamed 2006 mould. Gemini's photo angles hide the mould's worst sins. To be fair it isn't awful - just inferior to all the other 787-8s aside from Dragon's and Hogan's
This didn't last though as their split with Phoenix and transfer over to JC Wings (who had no 787) meant they had to return to this old seamed mould in 2014. Certainly by 2014, when the 787-9 appeared, you'd have expected them to be producing slot in wings moulds and not just stretching the old 787-8 version, however clearly at this point JC Wings weren't in a position to create a new 787 (which they did in 2016). That meant that Gemini just lengthened their existing cradle mount 787-8 to make a -9. They kept on releasing 787-9s on this obsolescent mould well into 2021, which is poor. By then JC Wings had had their seamless version for 5 years and of course they are being made in the same factory!
To be fair the overall fuselage shape is actually quite good but the whole package is undermined heavily by the cradle mount and the large seam line. The wings also curve up too much for a ground version of the aircraft and the engines are quite close to the ground. At least Gemini has now finally moved across to the newer JC Wings mould.
Phoenix

The Phoenix of the late 2000s and early 2010s was something of a trendsetter and pioneer. Certainly they started creating a lot of seamless all new moulds during this period and were the first to add aerials. Coming from as long ago as 2006 their 787 was very good for the time but hasn't aged so well. 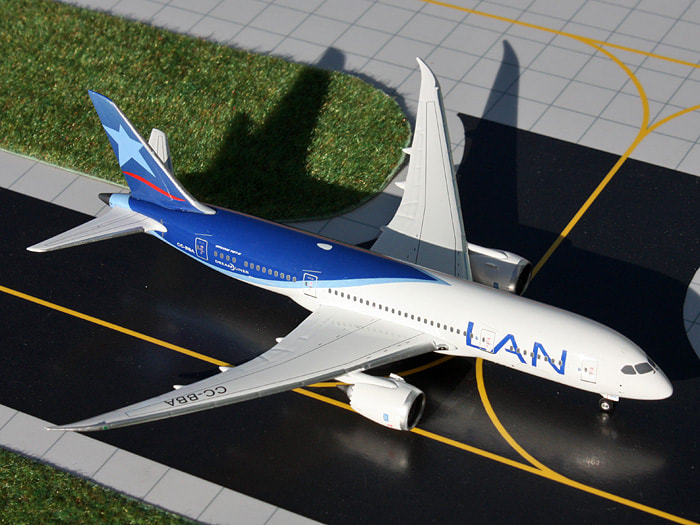 Comparing this Gemini release using the Phoenix 787-8 you can see the differences especially around the wing seam to the old Gemini mould
It is still in production today and has been used a lot but is nowadays miles behind the moulds being used by JC Wings/Gemini and NG Models. I have reviewed it in detail a few times:
United Dream: Xiamen Airlines Boeing 787-9 B-1356 by Phoenix
50 Up: All Nippon Boeing 787-9 JA882A by Phoenix
The mould was improved around 2018 with Phoenix new spinning fanblade engines but really they don't add a lot in my opinion and are arguably less realistic. Note also the odd continuous upward curve of the wing.​

787-8 (2007)
​787-9 (2013)
Hogan were inevitably going to make a 787 with their strong interest in the Japanese market since All Nippon was the launch customer. What Hogan also did was produce two versions of their moulds - one with straight on the ground wings and one with massively flexed 'in-flight' wings. The in-flight version looks bizarre since it still comes with undercarriage and to be honest I'm not sure even the real thing has that much wing flex in-flight. 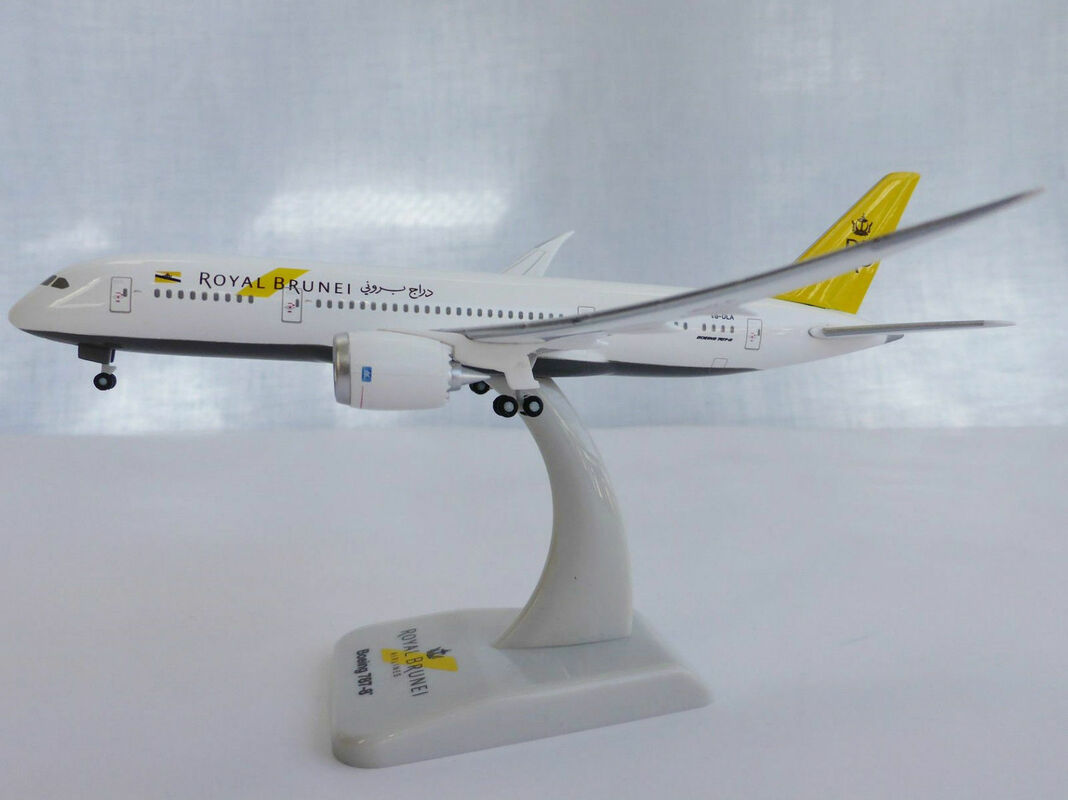 The in-flight version - note the extreme wing flex
In other ways the mould looks ok but, as is usually the case with Hogan moulds, simplistic. It is a seamless mould but the shaping is a little clumsy and the undercarriage very simple and plasticky. The tail join to the fuselage is also obvious. It also lacks aerials of any kind and is reminiscent more of Dragon Wings from 2002 than JC Wings from 2016. Given the competition this mould is easy to ignore and hasn't been used since 2017.

787-8 (2013)
The Witty Wings 787 mould benefits strongly from being produced after the 787 had actually entered service and so with the benefit of the ability to get better details of how the type finally looked.  Unfortunately due to the collapse of Witty Wings in late 2014 its usage was very limited and although JC Wings acquired all the old Witty moulds at auction, and didn't have a 787-8 of its own at the time, it has never been seen since. 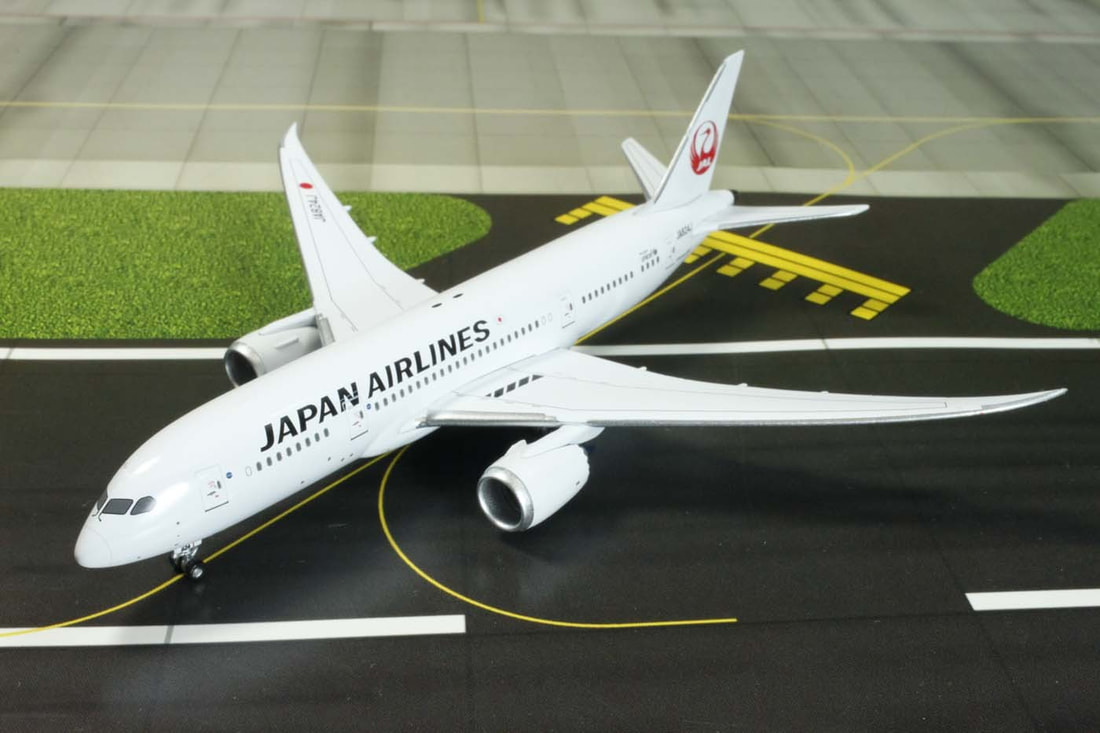 This is a shame as it is easily the best 787-8 made up to that time and although lacking aerials it was one of the very first moulds in 400 scale to feature hollow core engines. Witty were proving something of a pioneer but their collapse means that this mould (only used 9 times) is just a footnote in the history of the 787 in 400 scale.
JC Wings

After a rather lacklustre bunch of moulds it was JC Wings who rescued us from mediocre 787s with an excellent set of 787 variants featuring wing sets including both standard and flaps down variants. The moulds also feature the hollow core engines with spinning fanblades. The moulds are near faultless with just minor criticism around the size of the aerials and shape of the tail. I have reviewed the mould a few times in detail:
United Dream Squared: Xiamen Airlines Boeing 787-9 B-1356 by JC Wings
The Dreamliner Effect: Boeing 787-10 N528ZC by JC Wings
Flaps Down: Xiamen Airlines 787-9 B-1566 by JC Wings 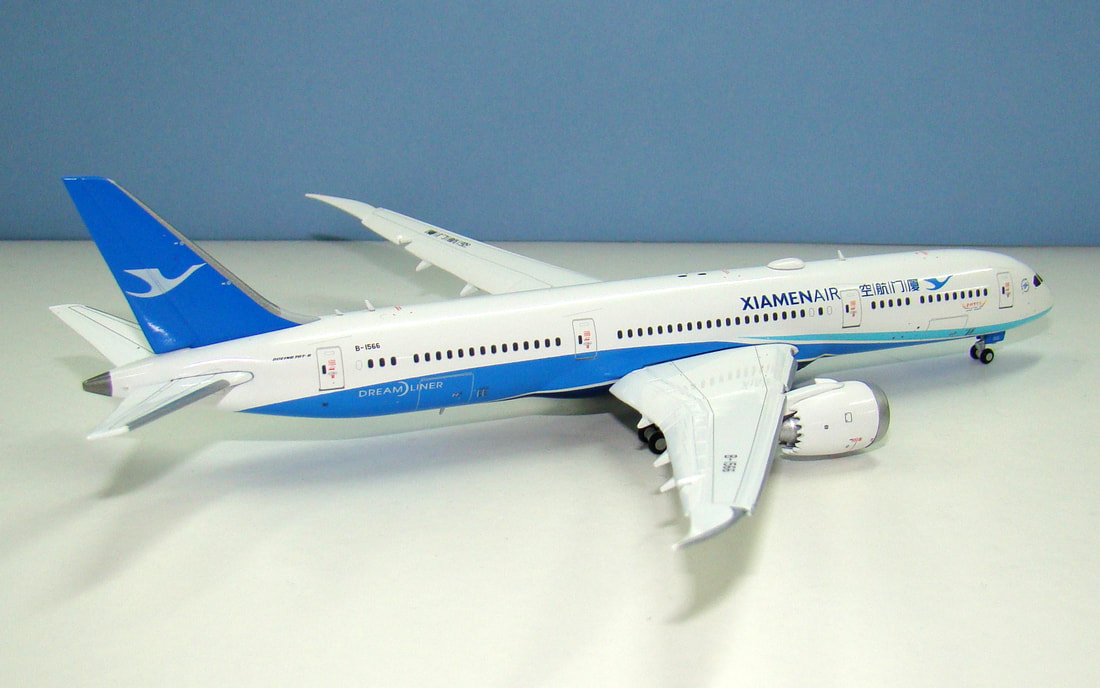 Flaps Down on this 2017 release
JC Wings, and lately Gemini too, have made good use of the mould, although obviously this being JC wings there is often an extended wait for the releases to actually appear in stores. This is a very strong contender for the best 787 mould series and can easily go toe to toe with the NG Models versions.
NG Models

The 787-9 was only NG Models second new mould, after the 757, and showed great promise at the time I first reviewed it - see here:
2018 Detailed 787 Mould Comparison 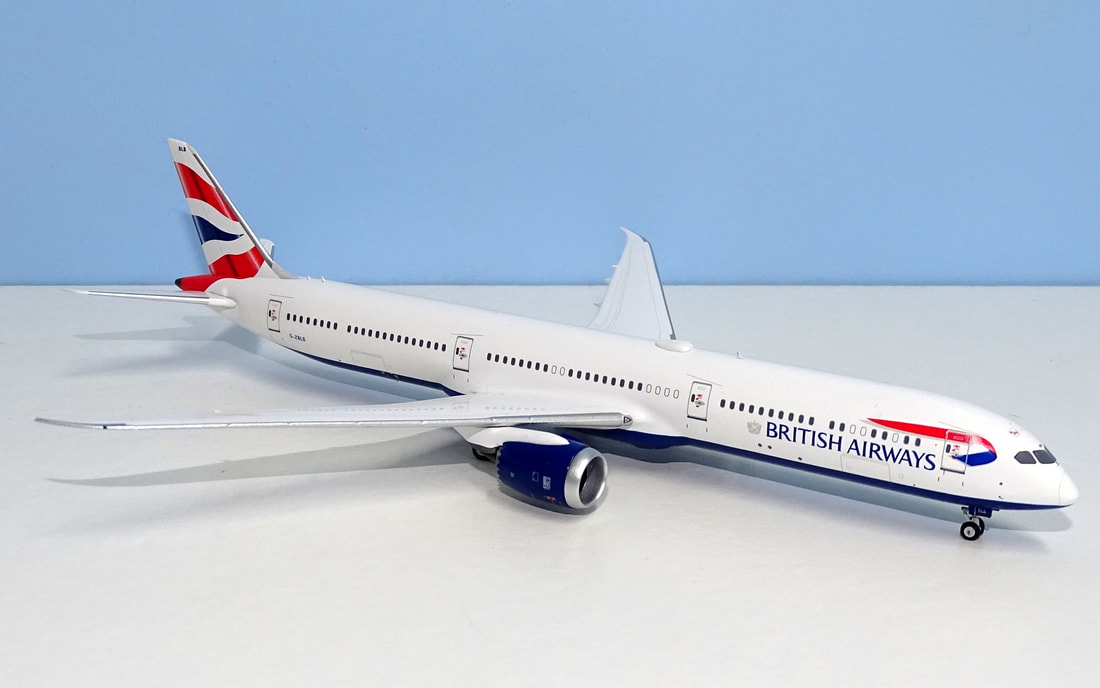 Since that time NG Models have significantly improved the landing gear and the moulds have matured into very impressive 787s as good or better than the JC Wings versions. I have reviewed them several times in detail:
British Airways | Boeing 787-10 | G-ZBLB | NG Models
Dream A Journey: Juneyao Airlines Boeing 787-9 B-20EC by NG Models
Bora Bora: Air Tahiti Nui Boeing 787-9 F-OVAA by NG Models
NG Models have also been quite prolific with their usage of the moulds and since they tend to get their models out quite soon after announcement it is hard not to use them as the primary source of 787s in 2022. Their only gap is the lack of a 787-8 version.
Aviation400

Aviation400 announced their move into Boeing 787s way back in December 2020 and there has been significant progress with an excellent looking mould sample available since July 2021:
Aviation400 Boeing 787-9 Mould Sample Review
There hasn't been a lot of news since aside from the announcement of four 787-9 releases (ANA Star Wars, Lufthansa, Qatar and China Southern), which will presumably hit the shelves in the second half of the year.